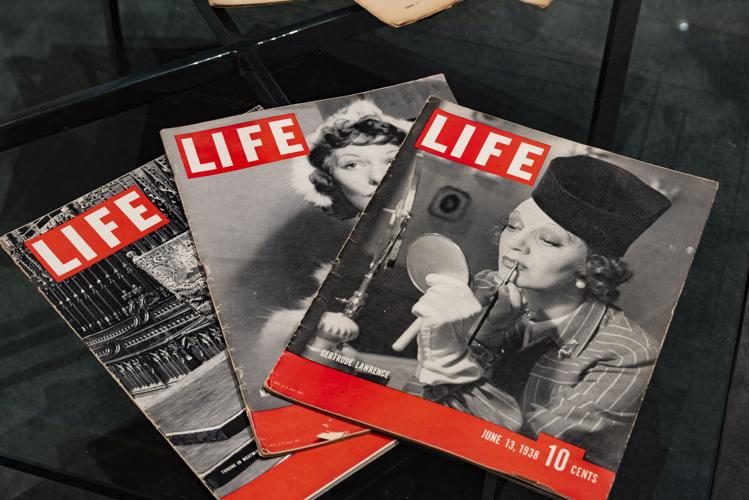 THAT'S LIFE: Life magazine was published as a weekly, photography-driven news magazine from 1936 until 1972. At its prime, it reached about one-quarter of the U.S. population. The "Life Magazine and the Power of Photography" exhibit is at the Museum of Fine Arts in Boston through Jan. 16. Ann and Graham Gund Gallery/Photograph copyright Museum of Fine Arts, Boston 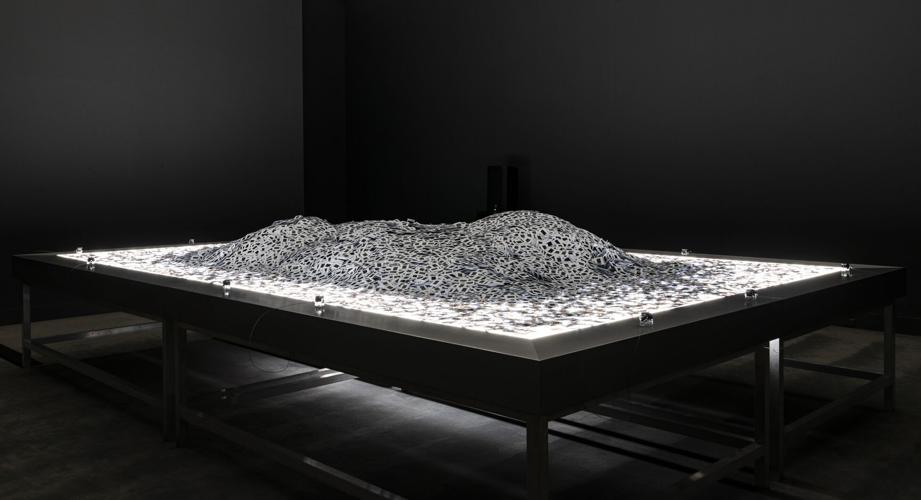 EXHIBITION: "The Silence of Nduwayezu," by Alfredo Jaar, from 1997, includes slides, a light table and magnifiers. It's part of the "Life Magazine and the Power of Photography" exhibition in Boston. Ann and Graham Gund Gallery/Photograph copyright Museum of Fine Arts, Boston

This fact floored me: Between the Great Depression and the Vietnam War, according to the organizers of "Life Magazine and the Power of Photography," an exhibition at Boston's Museum of Fine Arts, "the majority of photographs printed and consumed in the United States appeared on the pages of illustrated magazines."

Today, with photographs published and consumed everywhere, it's staggering to think that their dissemination was ever so concentrated.

Preeminent among illustrated magazines was Life. Published as a weekly news magazine between 1936 and 1972, Life magazine sold in the tens of millions. When you include pass-along readership, its pages regularly reached about one-quarter of America's population.

Life magazine emerged before the onset of television. What made it revolutionary was its emphasis on photography. Previous illustrated magazines used artists' illustrations. If they used photographs, they were subordinated to the written word. Life put photographs front and center.

Its founder, Time Inc. publisher Henry Luce, was inspired by picture magazines in Europe. Working in New York with Kurt Safranski, a German Jew who had come to the United States to escape Nazi persecution, and Kurt Korff, a former editor at "Berliner Illustrirte Zeitung," Luce experimented with mock-ups and dummies, before typing up a "Prospectus for a New Magazine."

You can see this electrifying document in the exhibition's first gallery. It was like a pitch, so it may help to imagine it delivered in the voice of Jon Hamm as ad man Don Draper, replete with pregnant pauses for dramatic effect. The new magazine's purpose, wrote Luce, would be "to see life; to see the world; to eyewitness great events; to watch the faces of the poor and the gestures of the proud; to see strange things - machines, armies, multitudes, shadows in the jungle and on the moon ... to see and to take pleasure in seeing; to see and be amazed; to see and be instructed."

The magazine's working title at this point was "The Show-Book of the World." Its premise was that "to see, and to be shown, is now the will and new expectancy of half mankind." Feel the tectonic force of that statement! The new weekly's destiny-fulfilling mission was to be carried out by photographers. The magazine, Luce wrote, "proposes to be the biggest picture show on earth. ... It proposes to scour the world for the best pictures of every kind; to edit them with a feeling for visual form, for history and for drama; and to publish them on fine paper, every week, for a dime."

Killer sentence. Fantastic use of punctuation. I got goose bumps when I read it. It made me wonder, too, about the rhetoric they are cooking up right now at Meta, Google and Apple, and how this will shape our lives in the decades to come.

Because Life really did shape lives. It affected people's understanding of the world and their attitudes, and it took on the power of a shared record, a history. "It was all three [TV] networks combined," says 99-year-old Stan Flink, a former reporter and correspondent for Life, on the exhibition's audio guide.

With its emphasis on visual storytelling through sequenced photographs (instead of one-off images illustrating articles), Life revolutionized the news. Photographers who worked for the magazine included Gordon Parks, Margaret Bourke-White, Robert Capa, Henri Cartier-Bresson and W. Eugene Smith. But this exhibition, organized by Kristen Gresh, Katherine Bussard and Alissa Schapiro, is not a greatest-hits selection of iconic images from the pages of Life. Its conception is more ambitious than that.

Life magazine emerged before the onset of television. What made it revolutionary was its emphasis on photography. Previous illustrated magazines used artists' illustrations. If they used photographs, they were subordinated to the written word. Life put photographs front and center.

It does include some of the 20th century's best-known photographs. Among them: Capa's photograph of the 1944 landing at Normandy (which photographer Matthias Bruggman describes on the audio guide as "the Mona Lisa of conflict photography"); J.R. Eyerman's 1952 photograph of an audience watching a movie with 3-D spectacles; Alfred Eisenstaedt's 1945 photograph of a sailor kissing a woman on V-J Day; and Frank Dandridge's 1963 photograph of 12-year-old Sarah Collins, hospitalized with injured eyes after the bombing of Birmingham's 16th Street Baptist Church, which killed her sister and three other girls.

But the show doesn't just present these iconic photographs and their backstories. It delves into every aspect of the photographs - from the magazine's commissioning process and story researchers to the assignments themselves, the image selections, the captioning and layouts, and the images' subsequent impact. It's not only about how the sausage was made, but also how it was cooked, how it was served, who ate it and how it tasted. For anyone interested in journalism, photography and ethics, it's revelatory - and riveting.

"Life Magazine and the Power of Photography" is a much bigger version of an exhibition that opened at the Princeton University Art Museum in early 2020. That show was cut short by the pandemic. If you missed it there and can't see it in Boston, it comes with an award-winning catalogue full of fresh research drawn from the archives of Life magazine and the photographers who worked for it.

Dispatches from the field

Occasionally, photographers would pitch an idea and have it accepted. Much more often, the magazine's editorial team would select the subject, choose a photographer, and workshop the story using researchers and a story-building team. In other words, it was a collaboration. The challenge of collaborations, as everyone knows, is keeping everyone on the same page. At Life, things became interesting when the photographer in the field (usually accompanied by a reporter) captured things that didn't entirely align with the story as conceived.

It's fascinating to read letters and telegrams sent from the field by the likes of Margaret Bourke-White, Yousuf Karsh (who photographed Winston Churchill) and W. Eugene Smith. Smith, having spent almost a month photographing midwives working in impoverished areas of the U.S. South, wrote to the magazine complaining about the "staggering" amount of money he had spent on cameras, lenses and portable strobes, and lamenting the state of his car, "so beat by the brutality of the backwoods cow paths that I feel I must either turn it in upon my return or go through with a complete and expensive overhaul." Smith hoped that his story would strike "a powerful blow ... against the stupidity of racial prejudice."

Letters sent from photographers in Vietnam and other war zones are harrowing reminders both of the risks taken by war photographers and the enormous logistical challenges they faced - not least smuggling rolls of film back to the magazine.

Inevitably (it's in the nature of journalism), photographers in the field discovered more than the story-building team had conceived. The team back at Life then had to decide how much to adjust their original idea or, conversely, how much to massage the images (by selection, captioning, layout or sometimes even manipulation) to make them "fit."

Were many of their decisions informed by ideological biases? Undoubtedly. A catastrophic global conflict dominated the magazine's early years and the Cold War followed. So did the civil rights movement, Vietnam and second-wave feminism. Life's generally moderate (within a U.S. context) viewpoint could appear imperialist from a foreign perspective. And within America, where the magazine catered to a mostly white, middle-class audience, it often ignored or misrepresented the experiences of large swaths of the population.

"Life Magazine and the Power of Photography" is open through Jan. 16 at the Museum of Fine Arts in Boston.

The Boston show includes more recent work, not affiliated with Life, by three contemporary artists - Alfredo Jaar, Alexandra Bell and Julia Wachtel - who are interested in the power of images in journalism. Their works, intended as reflections on some of the issues raised by the historical portion of the exhibition, are conceptual and critical of the power structures underlying the production of mainstream news. I found Wachtel's installation abstruse, and Bell's redactions and arch reworkings of New York Times front page articles provocative but tendentious (as she evidently feels the original articles were).

Jaar's installations I found more affecting. The Chilean-born, New York-based artist finds simple but powerful ways to question the effect of news photographs of traumatic events. His work expresses empathy for both photographers and their subjects. Photographers, he says on the audio guide, are often betrayed by photo agencies and media companies. They send in their work, but a "photo editor comes in and selects images to fit the ideological agenda of those media companies. Perhaps most of the best images were never used because they do not fit the narrative of the media and their ideological agendas."

The point is well taken, but it's not just about ideological agendas. It's also about the constraints on storytelling within a given format; about working collaboratively in a context of relentless deadlines; and about the bottom line. Life magazine was a business. People on the editorial side would have had differing opinions about what images were most important. Their colleagues on the business side would have had their own opinions about how to sell copies and attract advertising. Ideology inheres in everything, especially economics. It can be useful to make this visible. But it is naive simply to wish these forces away.

These, in any case, are the kinds of big questions provoked by this fascinating show, which may also lead us to measure the distance between the end of Life, which stopped publishing 50 years ago (overtaken by television and "magazine" format news programs like "60 Minutes"), and today's media landscape, where algorithms rule, infotainment prevails, cynical manipulation of people's fears is de rigueur, deep fakes are commonplace, and the very idea of a shared reality undergirded by empirical truth is under sustained attack.