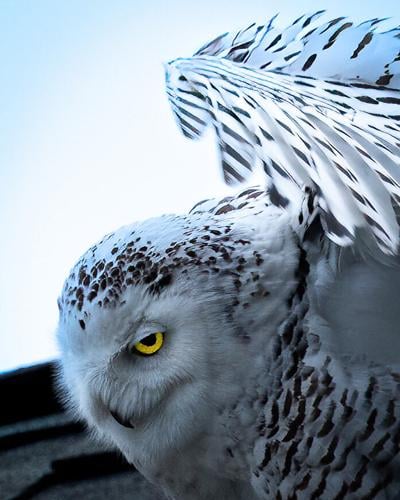 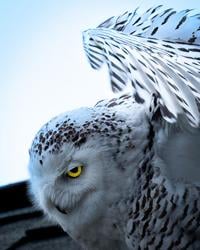 RAISED WING: A snowy owl, dubbed Snowy, that has taken up residence in Cypress, Calif., despite not being native to Southern California. Brett Banditelli-Handout/For The Washington Post 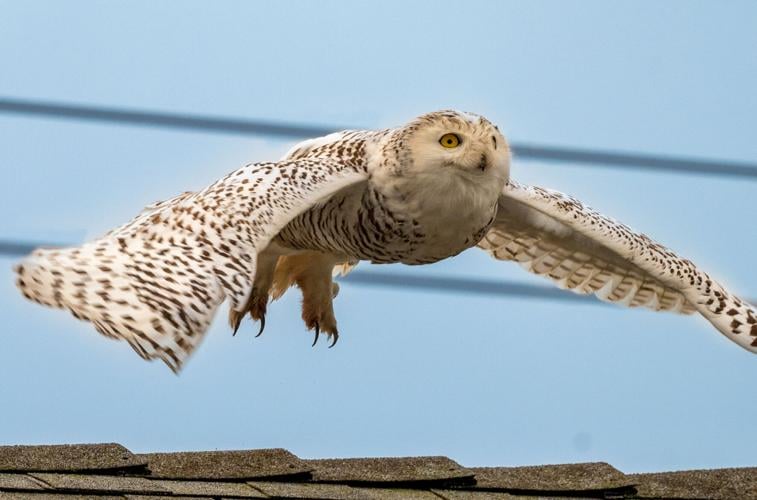 SOARING: A snowy owl, dubbed Snowy, that has taken up residence in Cypress, Calif., despite not being native to Southern California. Brett Banditelli-Handout/For The Washington Post 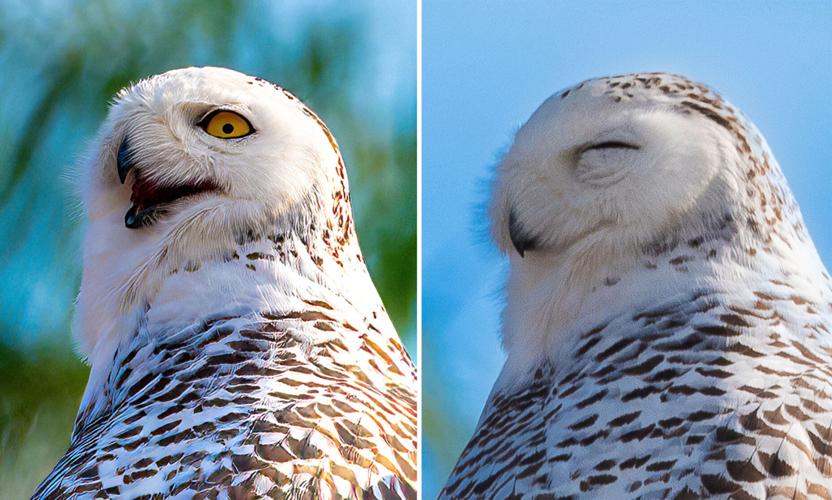 SNOWY: A snowy owl, dubbed Snowy, that has taken up residence in Cypress, Calif., despite not being native to Southern California. Brett Banditelli-Handout/For The Washington Post

WITH PREY: A snowy owl, dubbed Snowy, that has taken up residence in Cypress, Calif., despite not being native to Southern California. Brett Banditelli-Handout/For The Washington Post

RAISED WING: A snowy owl, dubbed Snowy, that has taken up residence in Cypress, Calif., despite not being native to Southern California. Brett Banditelli-Handout/For The Washington Post

SOARING: A snowy owl, dubbed Snowy, that has taken up residence in Cypress, Calif., despite not being native to Southern California. Brett Banditelli-Handout/For The Washington Post

SNOWY: A snowy owl, dubbed Snowy, that has taken up residence in Cypress, Calif., despite not being native to Southern California. Brett Banditelli-Handout/For The Washington Post

WITH PREY: A snowy owl, dubbed Snowy, that has taken up residence in Cypress, Calif., despite not being native to Southern California. Brett Banditelli-Handout/For The Washington Post

Nobody is quite sure why a snowy owl, usually found in Arctic regions, decided to relocate to sunny Cypress, Calif. Everyone you talk to has a theory. Some speculate that recent storms blew the bird off course; others think perhaps it is an escaped pet.

One thing is for sure: For the last six weeks, the white-winged creature dubbed Snowy has been mesmerizing locals, birders and photographers from sunrise to sunset. Groups of up to 60, who come together largely through a Facebook group dedicated to tracking the owl, have been gathering in the streets of the town in Orange County to catch a glimpse of the owl. They snap photographs in almost silence, so they do not spook their newest, most-cherished neighbor.

There is the man known as the "Owl Whisperer" who has turned his burgundy Toyota Highlander into what he calls an "Owlmobile," venturing out in it each day with binoculars and snacks for passengers he picks up that day. There's the professional photographer with more than 20,000 photos of Snowy. Experts are combing through the pellets the owl coughs up, to see if it is getting the food it needs to survive and looking for clues in the indigestible masses made from the bones and fur of its catches.

They know Snowy probably won't stay forever, but they're determined to make these moments last.

People plead daily for the owl's coordinates. "Anyone know today's location?" said one of hundreds of posts flooding the Cypress Snowy Owl Facebook Group, which has almost 2,000 members. "I have driven around trying to find her," wrote another.

But that's a no-no. "We do not talk about the location to protect the bird," Cypress City Councilwoman Frances Marquez said. This is part of Snowy's mystique - the owl's unexpected appearance is helping people "to create new relationships," she said, as they finally track the owl down.

The yellow-eyed raptor is "one of the coolest and most educational things to happen to Cypress since I was a kid," said Marquez, who grew up in Cypress in Southern California and describes Snowy as "a gift."

Roy Rausch, 63, created the Facebook group in early January for fans to share photos and videos of Snowy sightings. Now known by the group as the Owl Whisperer, or Ambassador of the Cypress Snowy Owl, he says one of the "few founding principles" of the thriving online community is that the page is not used to discuss Snowy's whereabouts.

He's on the forefront of the daily quests for Snowy sightings, letting children use his binoculars to view the bird, sometimes setting up his viewing station at a lower level so youngsters can get involved with the birdwatching. His "Owlcam" - Rausch's cellphone - logs updates for the group.

Rausch first learned that a rare bird had landed in the neighborhood on Dec. 27, thanks to an "Orange County rare bird alert" from "eBird," a database used to report birds spotted around the world. "I truly did freak out," he said. He grabbed his camera and was on the scene in just five minutes.

Bird experts have told Rausch that this is the first time in history that a snowy owl has been confirmed in the area. It's important the owl be respected, despite Snowy's fame, Rausch said.

"I heard a report of one drone, and that person never did it again," professional photographer Brett Banditelli said. Another person drove near the owl "with loud music playing in their car" and got enough judgmental looks that they drove off pretty quickly, he added.

Banditelli's owl portraits are fueling the craze. He's photographed the bird perching on rooftops or chimneys, and bringing successful kills back to the neighborhood to devour as locals watch from below. He snapped it pecking and pulling at the carcasses of prey.

Banditelli said that locals are allowing visitors into their backyards so that they can see the bird, while others are giving out drinks to the crowd. One local even trimmed back some trees on his property so that visitors had a clearer view.

"This is bringing people together," Banditelli said.

Some in the Facebook group say they are all bound spiritually since Snowy's visit, appreciating nature and simply living in the moment. Some are logging her location with the intensity of a private investigator.

"She always returns to the same four streets every morning around 6 a.m. and flies west as early as 4:15 p.m. The usual time she flies off is around 5:15," Marquez, the councilwoman, said. "Sometimes she flies to another house and sits perched on the highest point of the roof for another hour and other times she flies off directly for the night."

Experts and birders are trying to understand more about her diet and whether Snowy can thrive in California.

"She is eating coots and rats," Marquez told The Washington Post, adding that experts are concerned about the owl consuming rodenticide. Snowy has also been targeted by crows that divebomb as it sits up high. But the raptor is not easily intimidated. "She is not afraid of them," Marquez said. (The community mostly refers to its new neighbor as a female, but Snowy's sex is unknown.)

Rausch joked that the bird is becoming more aware of her fame in Cypress. While, so far, Snowy is unfazed by the attention - or crows trying to scare it away - Rausch worries that the bird will get "a little full of itself and want to hang out in a more ritzy neighborhood like Beverly Hills."

"I do realize that the morning will come while searching in the Owlmobile that I will not see my friend," he said. "That will be a sad day but I will soldier on and do my best to follow its journey, wherever it may lead."