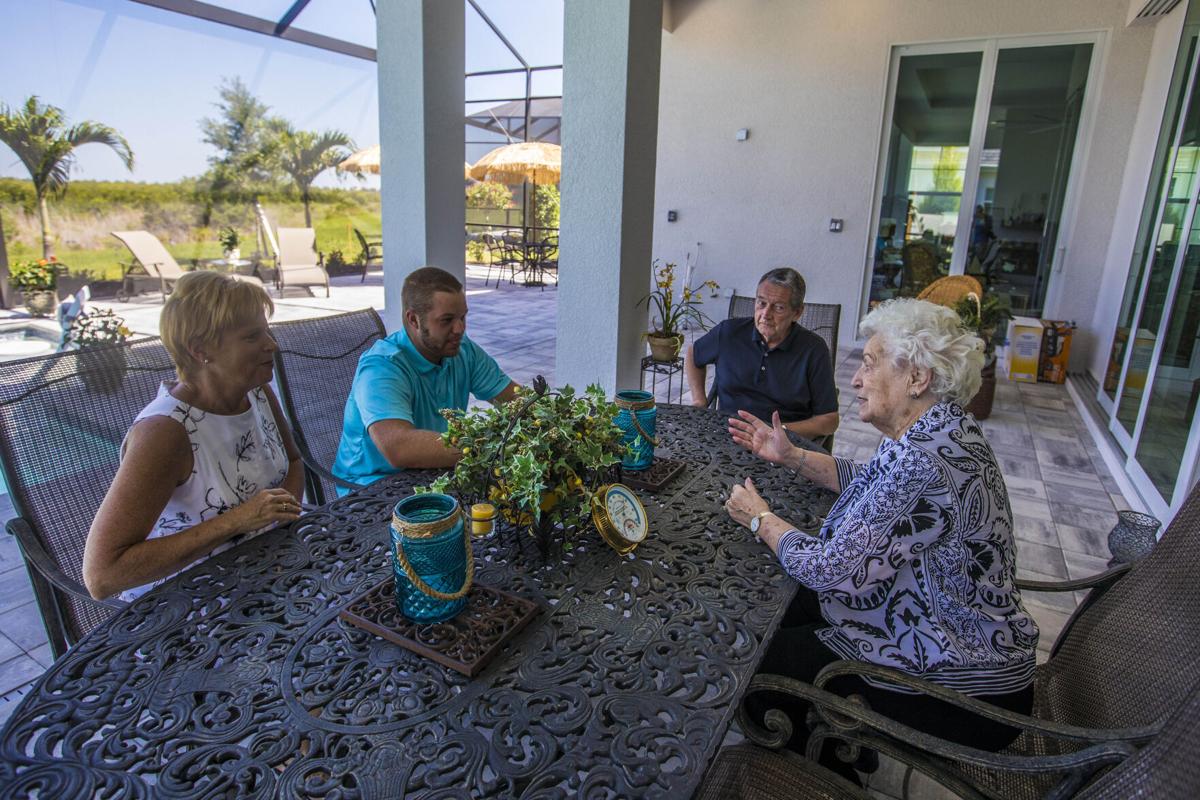 'TOGETHER AS A FAMILY': Don Markell and his wife Janice with their son Spencer are joined by grandmother Edna on the back patio of their home in Lakewood Ranch, Fla. "It was very important for my mom to have her own space and privacy yet be with the family, too," Janice says. Saul Martinez/For The Washington Post 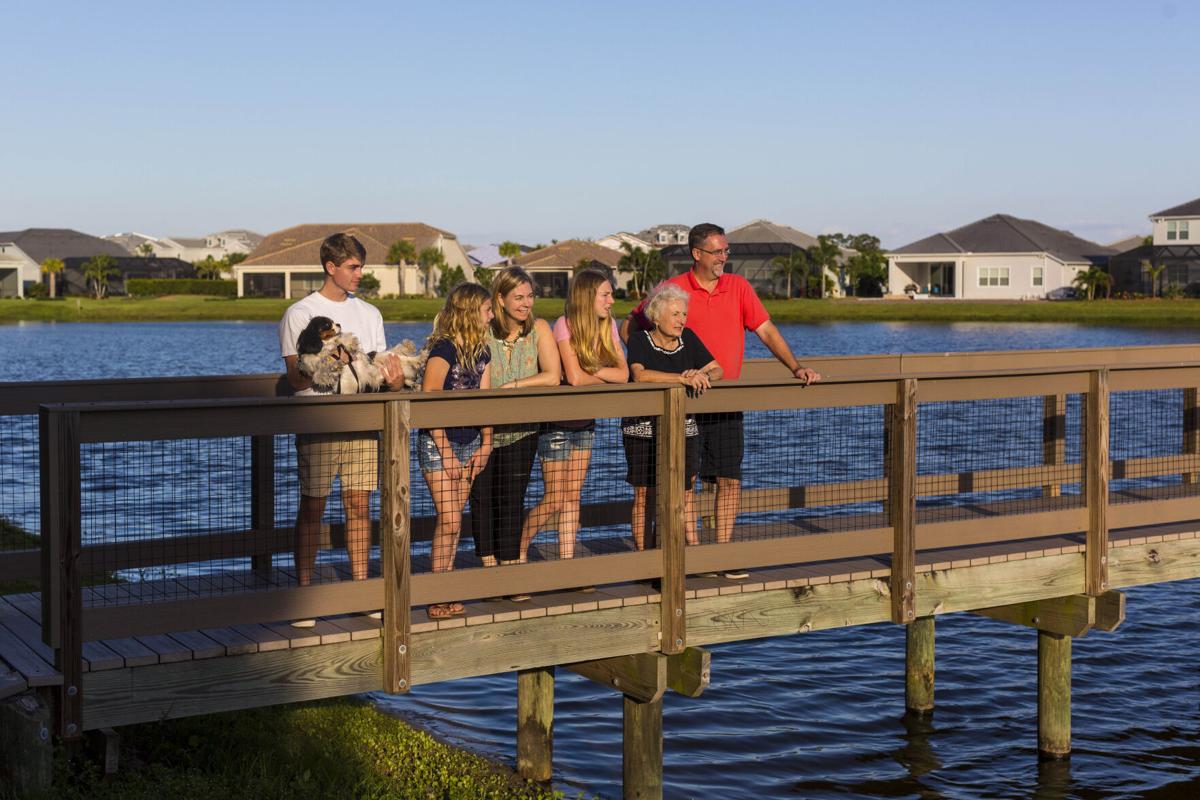 THE WILSONS: From left, Bobby, Ashley, Felicia, Abby, Karen and Dave Wilson at a lake in Mallory Park at Lakewood Ranch, Fla. The Wilsons are having two homes built on adjacent lots. Saul Martinez/For The Washington Post 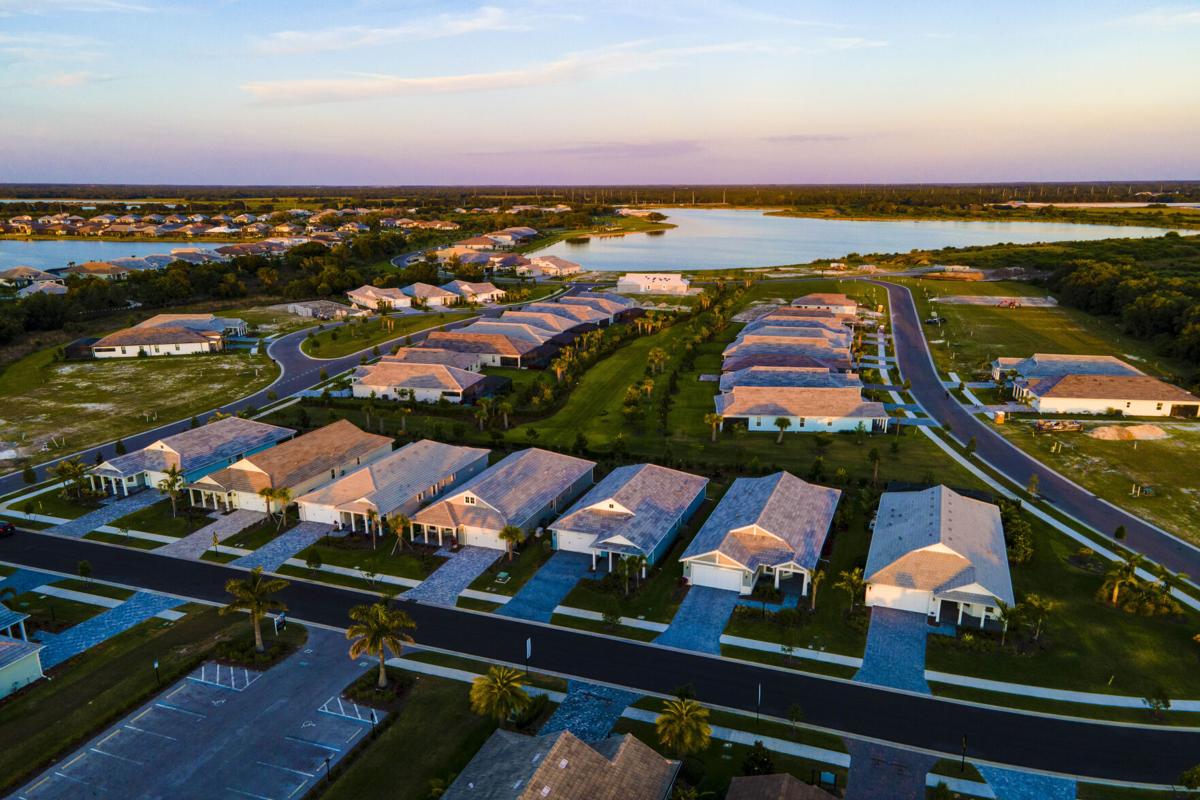 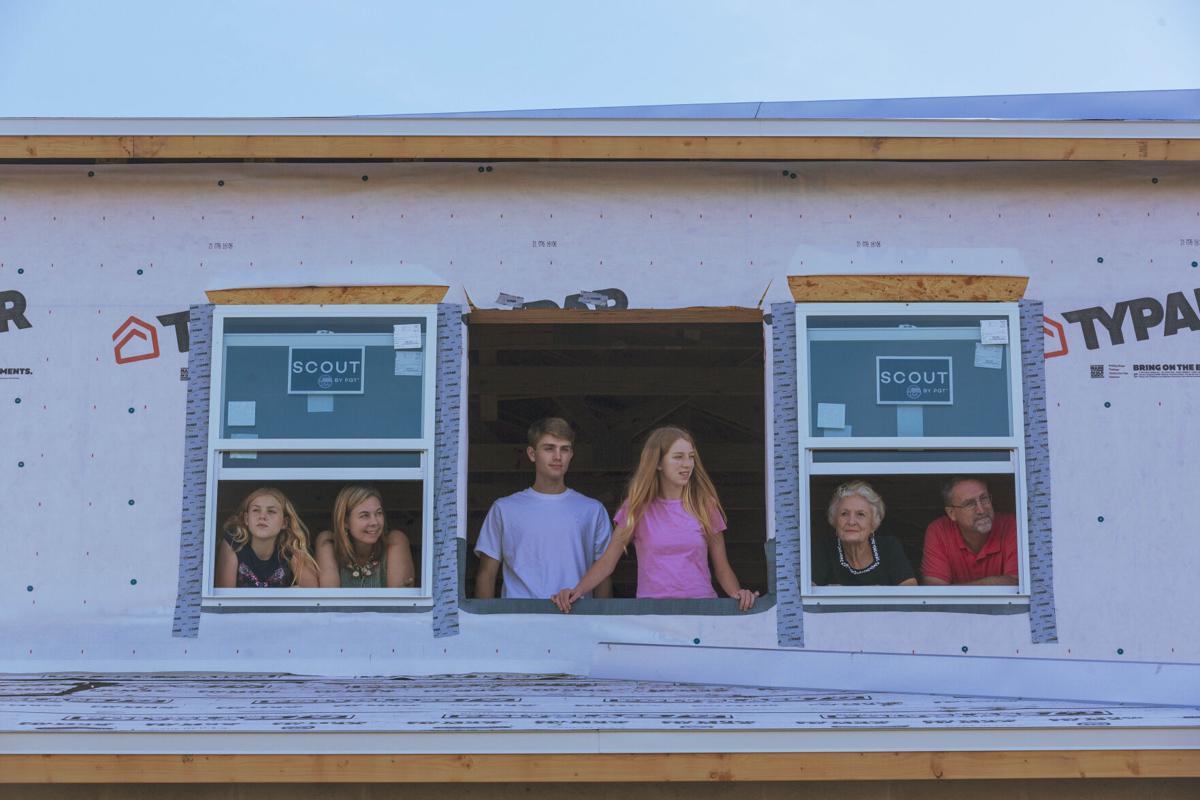 UNDER CONSTRUCTION: From left, Ashley, Felicia, Bobby, Abby, Karen and Dave Wilson at their home that is being built in Mallory Park at Lakewood Ranch, Fla. "We wanted a place with plenty of private space for (his mom, Karen) in Florida, so we chose a house with a multigen suite with a living area, bedroom and bathroom," Dave says. Saul Martinez/For The Washington Post

'TOGETHER AS A FAMILY': Don Markell and his wife Janice with their son Spencer are joined by grandmother Edna on the back patio of their home in Lakewood Ranch, Fla. "It was very important for my mom to have her own space and privacy yet be with the family, too," Janice says. Saul Martinez/For The Washington Post

THE WILSONS: From left, Bobby, Ashley, Felicia, Abby, Karen and Dave Wilson at a lake in Mallory Park at Lakewood Ranch, Fla. The Wilsons are having two homes built on adjacent lots. Saul Martinez/For The Washington Post

UNDER CONSTRUCTION: From left, Ashley, Felicia, Bobby, Abby, Karen and Dave Wilson at their home that is being built in Mallory Park at Lakewood Ranch, Fla. "We wanted a place with plenty of private space for (his mom, Karen) in Florida, so we chose a house with a multigen suite with a living area, bedroom and bathroom," Dave says. Saul Martinez/For The Washington Post

Like many families who experienced the severe disruption of the coronavirus pandemic, Janice and Don Markell made a major life change by asking Janice's mother to live with them, accelerating their plan for an eventual move to Florida.

"We were living in Montvale, New Jersey, and my mother was in assisted living nearby, but she wasn't able to leave, and we couldn't visit her," says Janice, 61. "Our son has lived in Lakewood Ranch near Sarasota for a few years, and we planned to move there eventually ourselves."

The solution for the family is a newly built home in the Lake Club section of Lakewood Ranch designed specifically for multigenerational living.

"It was very important for my mom to have her own space and privacy yet be with the family, too," Janice says. Edna, 91, has a wing with a living room, bedroom and bathroom as well as direct access to a lanai and to the kitchen. Janice's husband, Don, 74, is a real estate broker in New Jersey who plans to get his license in Florida. Spencer, their 26-year-old son, has his own wing in the house with a sitting room, bedroom and private bathroom.

"We didn't expect to do this so quickly, but we felt that the pandemic restrictions would last a long time, and we wanted to be together as a family," Janice says. The family spent $1.7 million on their new home after selling their home and the home of Janice's mother in New Jersey, which had been empty while she was in assisted living.

Lakewood Ranch appealed to them because it's a multigenerational community specifically designed for a healthy lifestyle and activities for every age group.

"We didn't want to be in an active-adult community," Janice says. "My mom said she was happy to move to Florida except she didn't want to be around 'old people' even though she's 91. We love being in a mixed-age community with lots of young families around."

The upheaval created by the coronavirus pandemic led to an increase in the number of homes purchased for multigenerational households, which rose to 15% between April and June 2020, according to the National Association of Realtors. That represents the highest percentage of multigenerational homes since NAR began tracking the trend in 2012 after the Great Recession and was up from 11% between July 2019 and March 2020.

Lakewood Ranch, one of the largest planned communities in the country with 50 square miles of property, has been the best-selling multigenerational community in the country for nine years, according to RCLCO, a real estate consulting firm. The community has more than 41,000 residents; a hospital; schools; a main street with theaters, shops and restaurants; a farmers market; sports complex; the Sarasota Polo Club; three town centers; five neighborhood shopping centers; and more than 120 miles of trails.

"The decision to make Lakewood Ranch a multigenerational community rather than a retirement community was made 27 years ago when the development was first planned," says Laura Cole, senior vice president of LWR Communities, developers of Lakewood Ranch. "The planners wanted this to be a family-oriented community of primary residences, not a vacation home or retirement destination."

The planned community has 32 villages, with 40% of the land in the older villages designated as open space. Newer villages have 60% of their land designated for open space including parks and trails. Each village has its own amenities such as a swimming pool and fitness center. More than 60 clubs are available to join, and there are planned activities in the villages and for the entire community.

"Depending on what their priorities are, Lakewood Ranch offers something relatively affordable that checks all the boxes for their interests and hobbies," says Josh Graeve, vice president of sales for Pulte Group in the Southwest Florida market. Pulte sells multigenerational homes in three villages at Lakewood Ranch and sells homes in an age-restricted village for people 55 and older.

Cole moved to Lakewood Ranch a few years ago and then her parents moved into a home in one of the age-restricted villages.

"My own experience speaks to the intent of Lakewood Ranch to be multigenerational," Cole says. "My parents are close to doctors and everything else they need, and like the maintenance-free living. Eventually, if they need more care, they can move into one of the senior housing buildings in the community and I'll still be nearby."

The site plan for the community is designed with the goal that every home is within 1 1/2 miles of a grocery store and a neighborhood shopping center and within five miles of a town center, Cole says. Parks and trails connect the homes with the shopping areas, recreational amenities and schools. Homeowners pay $15 annually to support a community activities organization that sponsors clubs.

"Two years ago, Lakewood Ranch was chosen as the headquarters for a Brain Health Initiative, which is a collaboration of Massachusetts General Hospital and the Academy of Brain Health and Performance, to study brain health at all ages," Cole says. "They chose the community in part because of the scale of the community and number of people in different age brackets."

The homes in Lakewood Ranch range from villas and condos priced from the upper $200,000s to single-family homes priced from the $300,000s to more than $3 million. Rental homes and senior-living housing are also available in the community.

The variety of housing options drew Dave Wilson, 55, and his family, which includes his 76-year-old mother Karen, his wife Felicia, 50, and their three children, who are in fifth, eighth and 11th grade, to Lakewood Ranch. Wilson has worked from a home office for GE for years. Felicia, a project manager for the University of Virginia, anticipates working from home indefinitely.

"We were living in Charlottesville and all three of our children found online school difficult when the schools closed," Dave says. "We looked into alternatives to get our kids (Ashley, Bobby and Abby) in front of teachers, but a year of private school for all three kids would have been $85,000."

Initially, the family rented in a community near Lakewood Ranch. Now, they're having two homes built on adjacent lots in the Mallory Park village of Lakewood Ranch. The homes, which are under construction by Pulte, are priced from the mid-$400,000s to the mid-$500,000s and up, Graeve says.

"My mother has lived with us in a multigenerational house in Charlottesville with her own apartment and kitchen since my father passed away 2 1/2 years ago," Dave says. "We wanted a place with plenty of private space for her in Florida, so we chose a house with a multigen suite with a living area, bedroom and bathroom."

When the Wilsons were choosing the options for their new home, they noticed the lot adjacent to theirs was available.

"My mom said, 'I'll take it' and made a deposit immediately," Dave says. "So now she'll have even more privacy and yet we'll be right next door. My wife and I each have two siblings, so we'll have plenty of space for everyone to visit between the two houses, too."

Dave and Felicia opted to convert their multigen suite into a game room for their kids since the house has five bedrooms even without the suite. His mother's house is smaller but also has five bedrooms.

"In the Sarasota market, a lot of our buyers want an in-law suite with privacy and a kitchenette," says Claudine Léger-Wetzel, vice president of sales and marketing for Stock Development, a luxury home builder in the Lake Club section of Lakewood Ranch. "Before the pandemic, a lot of people found that it was nice to have their family members nearby in an assisted-living or independent-living home. Now, we're seeing a big spike in demand and interest for a home that has separate quarters for their parents with easy access to the rest of the house."

The homes built by Stock Development typically have more than 4,400 square feet indoors and 1,500 square feet of covered outdoor space. The in-law suite has direct access to an outdoor living space and a kitchenette with a microwave and small refrigerator.

"These homes usually have a four-car garage because you have several adults sharing the house who each have a car," Léger-Wetzel says. "The homes usually have two gathering spaces for flexibility so that different generations can be together or separate when they want to watch a movie or entertain friends."

Pulte's multigenerational homes at Lakewood Ranch often have a three-car garage and a driveway to accommodate three more cars, Graeve says. One model also includes a storage space that's the equivalent of one-half of a garage.

The extra living space in a multigen suite is valued by many buyers, says Graeve, even to use as a home office or guest space if they don't share their home with multiple generations.

"Over the past year, people have been reevaluating what's important to them and where they want to live permanently," Graeve says. "It's pretty common now to see parents following their grown children and grandchildren to live together or nearby. The amenities at Lakewood Ranch meet the needs and interests of people at every stage of life. They just need to choose the size of the house they want and their budget."