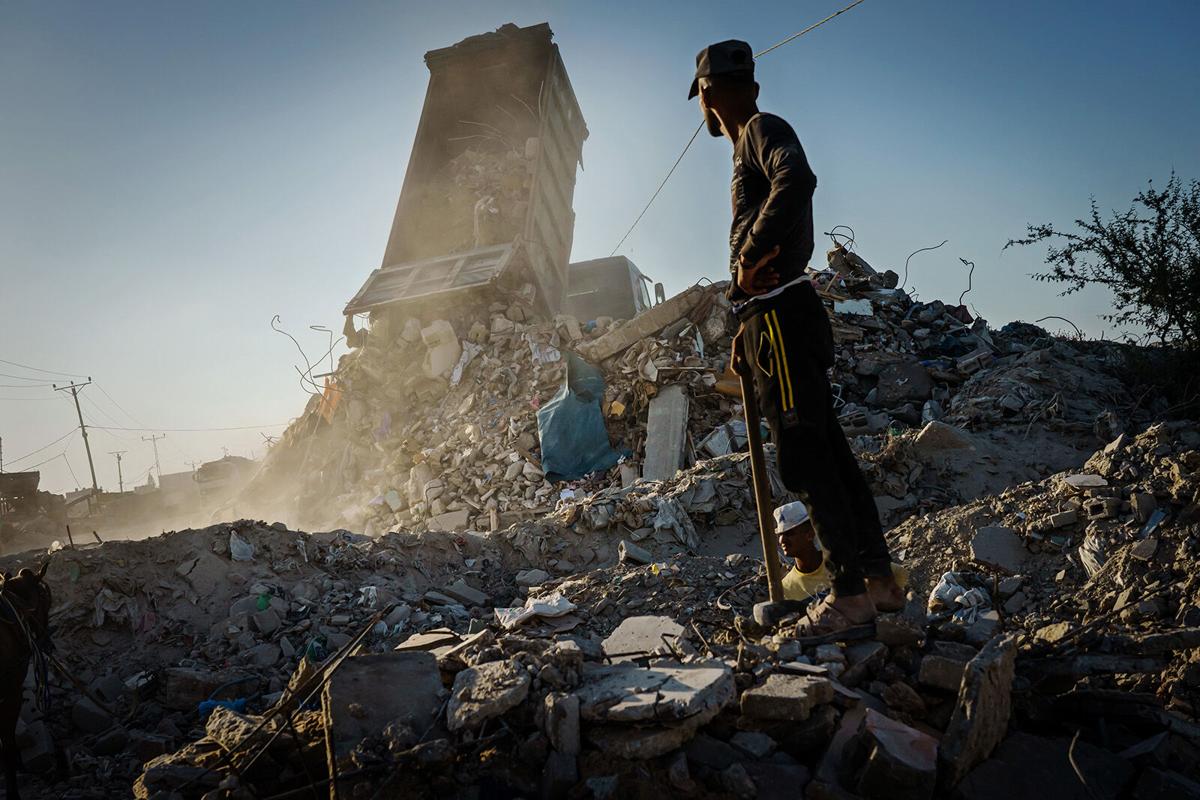 'BONE-BREAKING' LABOR: A worker tasked with breaking up rubble in Shujaiyyah prepares for a new truckload after the 11-day war between Hamas and Israel. Marcus Yam/Los Angeles Times 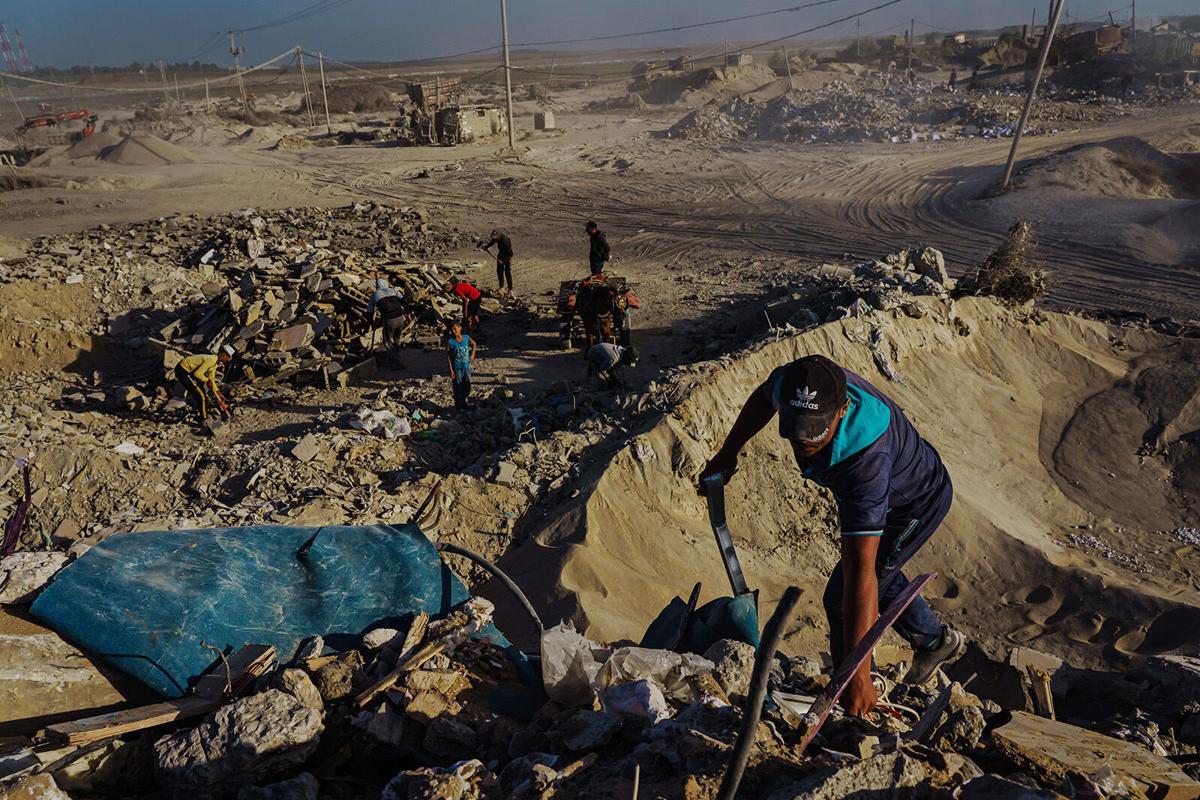 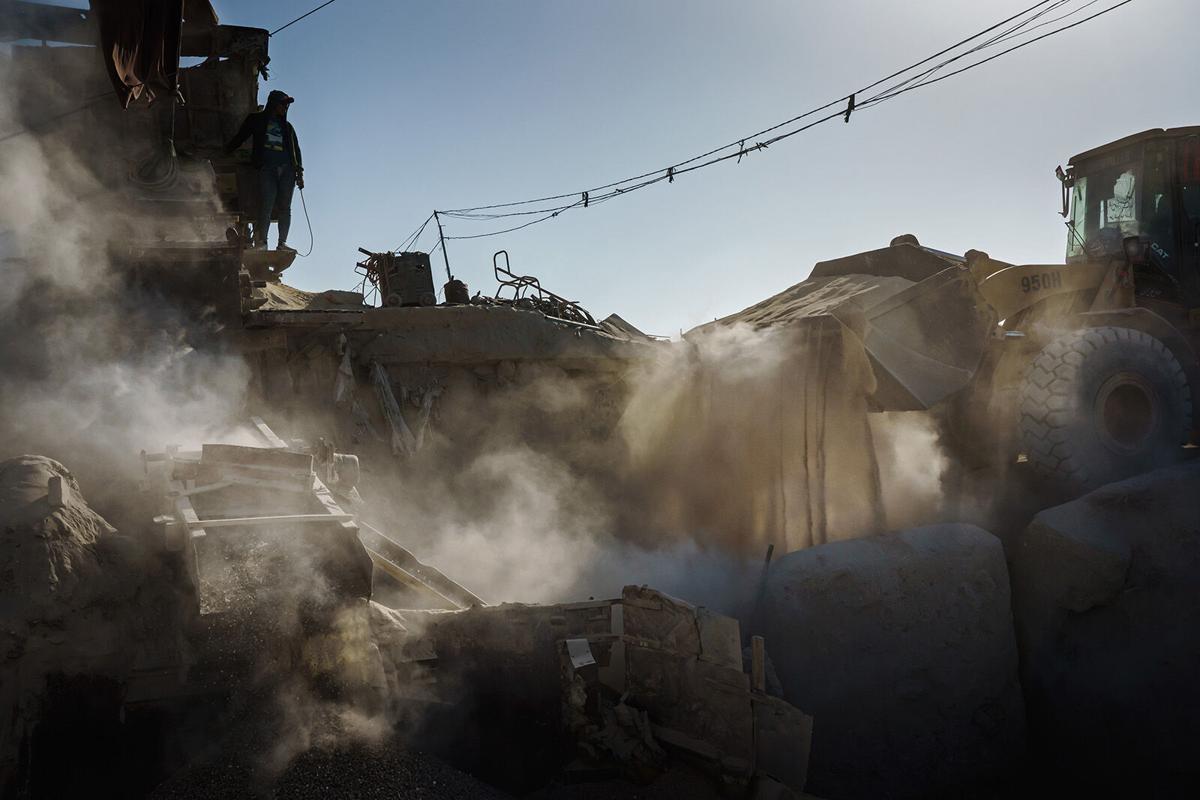 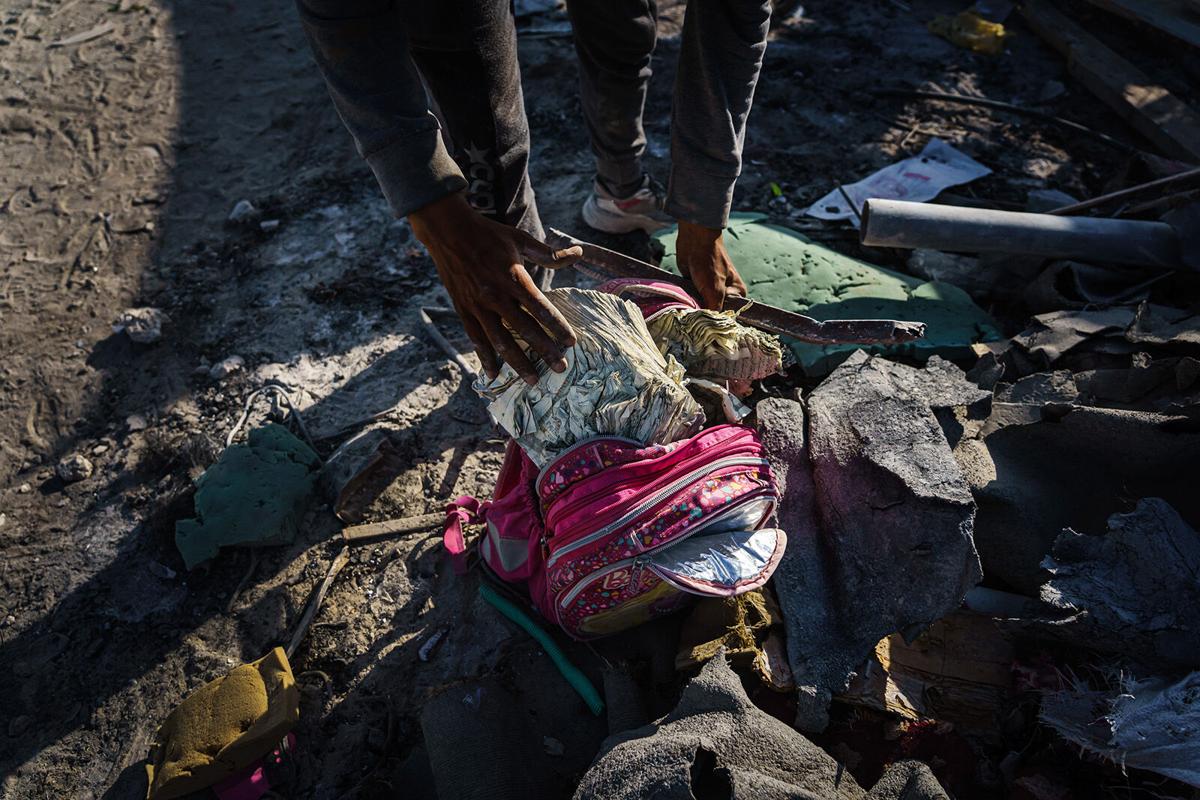 MEMORIES OF A PAST LIFE: A child's school backpack recovered from the wreckage. Marcus Yam/Los Angeles Times 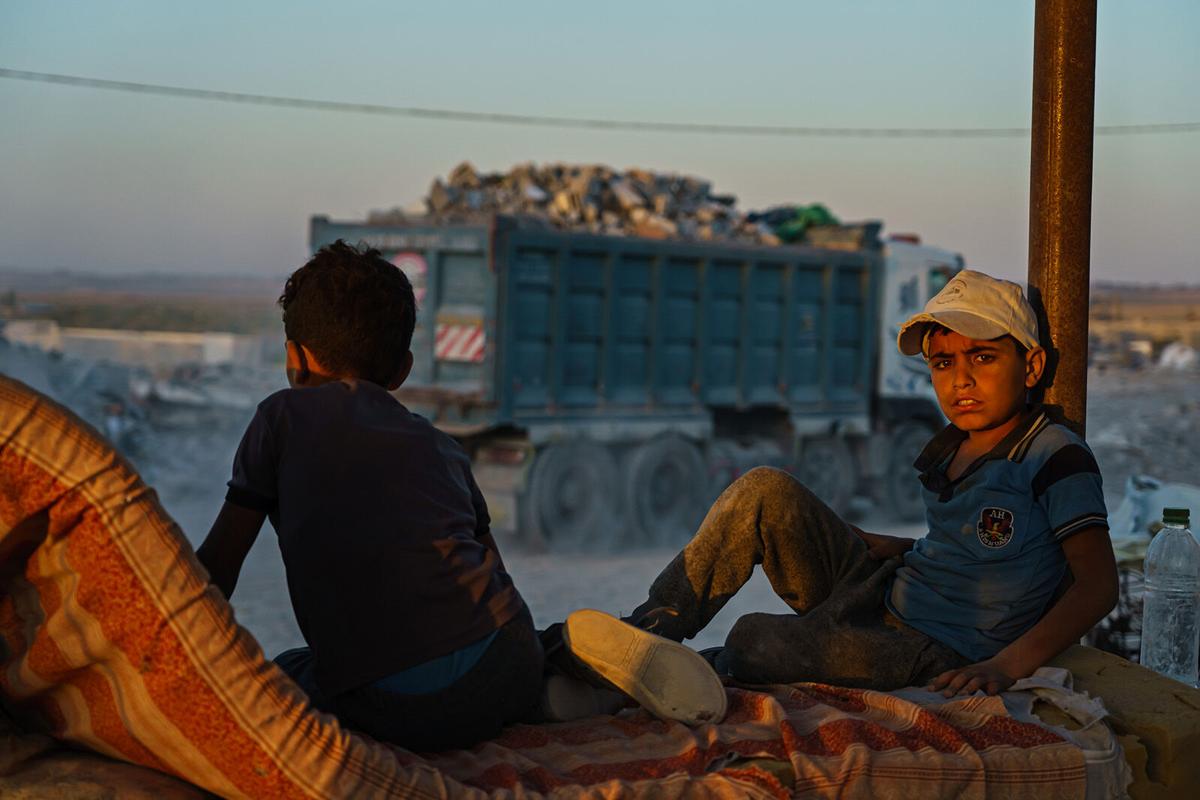 YOUNG LABORERS: Children who work as laborers sit and rest as a truck brings in debris. Marcus Yam/Los Angeles Times

'BONE-BREAKING' LABOR: A worker tasked with breaking up rubble in Shujaiyyah prepares for a new truckload after the 11-day war between Hamas and Israel. Marcus Yam/Los Angeles Times

MEMORIES OF A PAST LIFE: A child's school backpack recovered from the wreckage. Marcus Yam/Los Angeles Times

GAZA CITY, Gaza Strip — When the sunlight hits the right angle, the clouds of dust turn golden, swirling in gentle eddies around the concrete crusher before wafting toward the fence separating Gaza from Israel.

Another war between Hamas and Israel has fizzled out, halted by a May 21 cease-fire. As the last weeks of May stretched into June, Gazans took stock, surveying which families survived and what was destroyed in the latest conflagration.

Not so Mahmoud Abu Jubbah. For the 31-year-old, who along with his brother and other members of the family runs a concrete-crushing operation in the east Gaza neighborhood of Shujaiyyah, it is time to work.

Over the 11 days of armed conflict, Israeli strikes demolished 1,800 housing units and partially damaged a further 14,315 in Gaza, according to the Ministry of Public Works. Striating the enclave's neighborhoods are multistory towers-turned-maws and mountains of wrecked homes and offices, hollowed-out buildings and perennially pockmarked roads further churned up by the violence. Some 8,500 people are still displaced, the United Nations says.

All that has left people desperate to rebuild, more than doubling Gaza's demand for cement from about 4,000 tons a day to 10,000, according to the local Chamber of Commerce, even as construction materials are restricted from entering by an Israeli and Egyptian blockade. Gaza is starved for cement, and there isn't enough of it.

But there is plenty of rubble. That's where Abu Jubbah comes in.

From this dust-filled corner of Shujaiyyah, just a mile away from the orderly fields of Israel's Nahal Oz kibbutz, he and others like him can process up to four truckloads of debris – more than 80 tons – every day. It's a task he's had to do often, he says.

"I've been at this since 2008. Since then, I've also dealt with the destruction of 2012, 2014, 2019 and now 2021," he says matter-of-factly, rattling off the years of past confrontations between Israel and Hamas. So far, he's already collected more than 30 truckloads from the most recent conflict.

He scans his surroundings and points to a squat pile of wreckage nearby.

"See this one here? This is the last of the 2014 batch. We were finishing it up only a few days before the war this time."

The process is simple: Once Abu Jubbah's brother negotiates a price for the wreckage with municipal authorities, it's loaded onto trucks and dumped here in Shujaiyyah. It's then fed into a crusher, which pulverizes the rubble. What pours out the other end is sorted into three different sizes, which Abu Jubbah labels, in ascending order, "sand," "sesame" and "lentils."

He'll find a buyer for each, but only the sesame-sized granules, which by weight usually account for 60% of a load, can be used to make concrete blocks. Whereas a block made with fresh cement from Israel or Egypt can cost about 75 cents, one produced here costs a bit above 50 cents.

It's the tragic availability of Abu Jubbah's stock, rather than its price, that is the main draw.

Gazans procure cement either from Israeli or Egyptian firms, but deliveries are handled via the Gaza Reconstruction Mechanism, a set of regulations meant to keep tabs on constructions materials that could qualify as dual use, meaning items that could be used for civilian as well as military purposes. Cement, which Israel says is commandeered by Hamas to build its bunkers and underground tunnel system, stands at the top of the list.

To bring a bag of cement into Gaza, developers have to submit their plans to Israel and the Palestinian Authority and then wait more than 15 days for approval, says Maher Tabaa, the head of public relations for Gaza's Chamber of Commerce. If approved, bags entering Gaza are then put into a warehouse under international oversight, with security cameras that the Israelis can use to monitor all movements.

"It's not just difficult. It's bone-breaking," Tabaa says of the process.

"If cement were freely available, you could have thousands of people working. The electrician, the painter, the one who lays down tiles, the plumber – it all relies on cement. It's a chain."

With the border crossing with Israel still closed to construction materials since the hostilities began in May, despite the truce, operations like Abu Jubbah's are essential. But he has many – often grim – steps to go through before he can sell anything.

Standing on top of a plateau of rubble, Abu Jubbah looks down and says, "This here is what's left of the Abu Al-Ouf building, the one where 40 people were killed." He's referring to the tower where the Abu Al-Ouf family lived, which, along with other parts of a compound on Gaza City's Wahda Street, was leveled by Israeli missiles May 16. The blasts killed 42 people, more than half of them from the Kolak family and 15 from the Abu Al-Ouf family.

"I keep it off to the side because it needs to air out; it smells extra bad."

He stares at a truck rumbling down the dirt road bisecting Shujaiyyah's outskirts before stopping near him. He moves to the side before the truck turns around, lifts its bed and pours more contents onto the pile of debris.

To begin with, Abu Jubbah's is a scavenger's job. Even before the dust settles on the load, he and others clamber over the wreckage, on the lookout for the flash of an aluminum pot, a dented appliance, a piece of furniture – anything that can be repaired and reused.

Catching a bit of color in the gray, he leans close: It's an English-language exercise book belonging to 7-year-old Maram Abu Al-Ouf. "Where is the ball? It's under the table" is scrawled on one of its pages. She survived the airstrike.

At times, former residents of bombed-out buildings come to Abu Jubbah, hoping he'll have salvaged something of their past life. He remembers a woman who came looking for the gold jewelry she and her husband had hidden in a cubbyhole in the wall of their apartment, which was destroyed in the 2014 war. Abu Jubbah's workers found a portion of the gold and returned it to her, which he says saved her marriage.

He keeps any personal items of potential value for two days to give loved ones of the dead a chance to get them back before he gives them away or consigns them to the landfill.

Rather than seek them out, he lets family members approach him, having learned it's better not to take the initiative to return something that could remind them of the person they lost.

"Why would I give something to someone? To make them grieve again?" he says.

"Besides, there's usually nothing. Even the poorest people in Gaza won't touch most of this stuff."

'This is what we get'

Once a load is picked over, Abu Jubbah's team of six workers breaks up the bigger pieces of rubble with sledgehammers. It's hot, seemingly never-ending work, with the dust of the crusher turning damp on the sweaty foreheads of the crew. Near them, a 10-year-old boy, a member of the family who declines to give his name, recovers rusted snakes of rebar and chops them into 4-inch strips with a bolt cutter attached to a stand.

"We sell that to Israel, and companies won't take it unless it's that small," Abu Jubbah says. "This pile here? It'll get 10 shekels. That's barely enough for a good meal."

He stops for a moment, looks at the boy and becomes uncharacteristically annoyed.

"We're kidding ourselves. We say we'll hit Tel Aviv, and this is what we get," he says of Hamas' boasts of inflicting major damage on Israel.

"You think it's OK three people sit here and do this work? That a 10-year-old is sitting here cutting a strip of metal?"

He doesn't wait for an answer. A bulldozer drives near him, scoops up some broken-up rubble and dumps it in the crusher, whose incessant chugging kicks into high gear.

The dust starts up again.