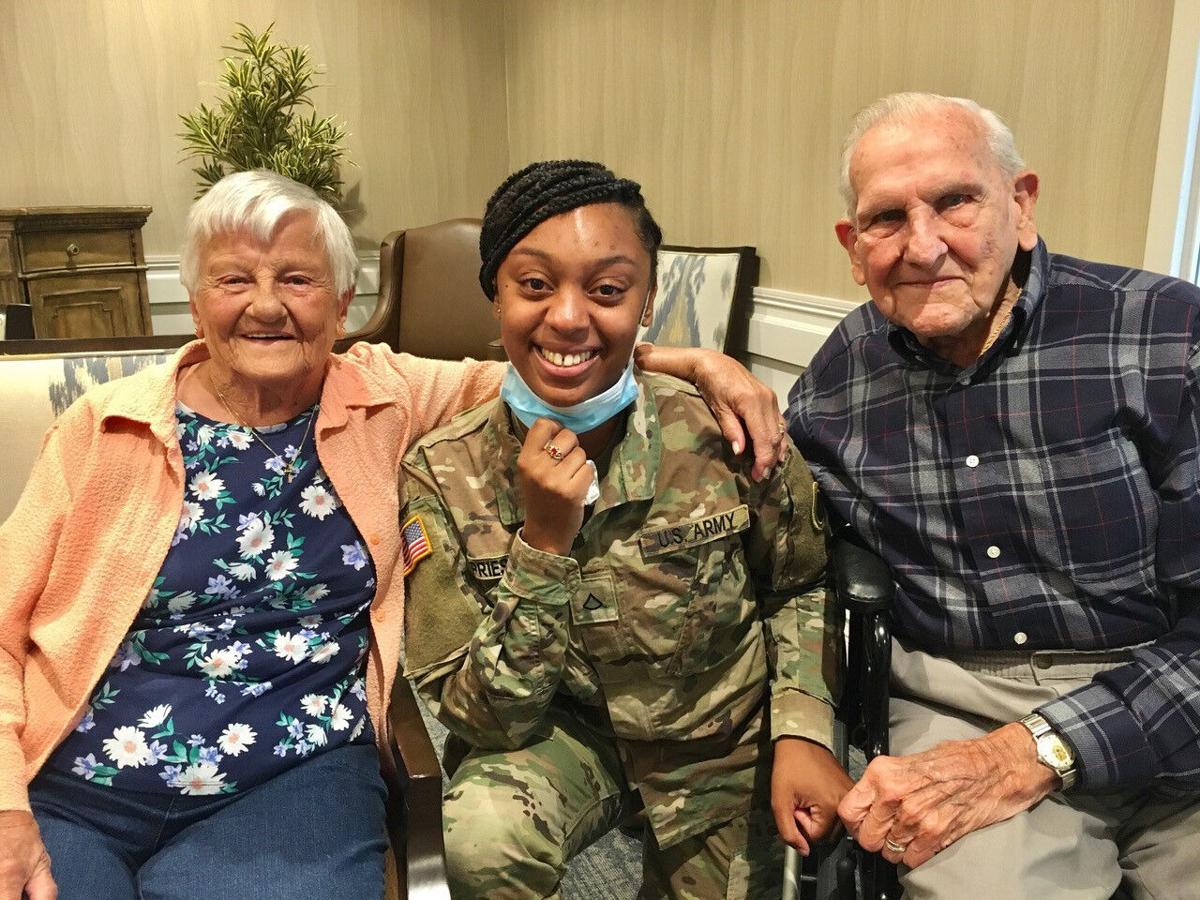 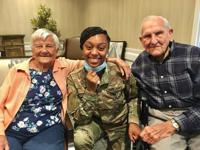 LIKE FAMILY: Delores Grasberger, 93, with her husband, 95-year-old Frank Grasberger, and Dashauna Priest, 21. The Grasbergers say they consider Priest to be a third daughter to them. Photo courtesy of Vitalia Senior Residences at Strongsville/Via The Washington Post 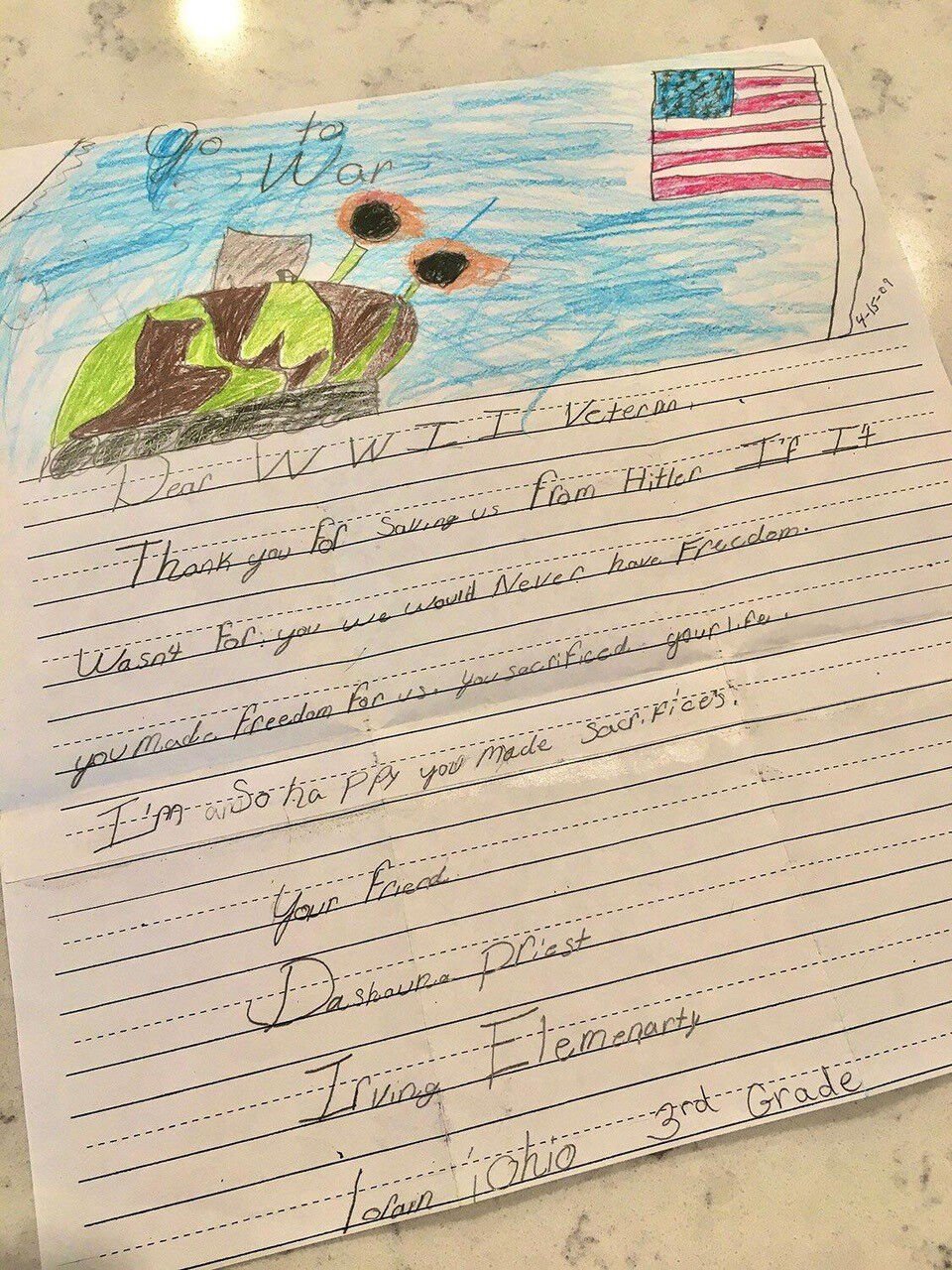 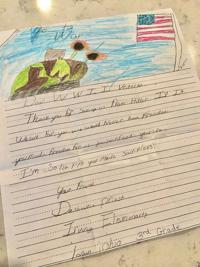 'THANK YOU': The letter Dashauna Priest wrote 12 years ago, which Frank Grasberger carries with him everywhere he goes. Photo courtesy of Vitalia Senior Residences at Strongsville/Via The Washington Post

LIKE FAMILY: Delores Grasberger, 93, with her husband, 95-year-old Frank Grasberger, and Dashauna Priest, 21. The Grasbergers say they consider Priest to be a third daughter to them. Photo courtesy of Vitalia Senior Residences at Strongsville/Via The Washington Post

'THANK YOU': The letter Dashauna Priest wrote 12 years ago, which Frank Grasberger carries with him everywhere he goes. Photo courtesy of Vitalia Senior Residences at Strongsville/Via The Washington Post

Dashauna Priest still recalls sitting in her third-grade classroom 12 years ago in Lorain, Ohio, writing a heartfelt thank-you letter to a World War II veteran whom she did not know.

At the time, and in the years that followed, she had no idea that the recipient of her letter would carry the note with him everywhere he went, carefully folded in an envelope.

Grasberger, who lives in Strongsville, Ohio, was drafted into the military when he was 18 and spent nearly three years in Germany. He received Priest's letter, which was part of a class project, while he was on an Honor Flight home from Washington, D.C., in 2009. Ever since, the letter has either been folded neatly in his pocket or tucked away beneath the seat of his wheelchair. Wherever Grasberger goes, the letter goes.

The handwritten note, printed on a sheet of lined paper, imparts a simple message of gratitude: "Thank you for saving us from Hitler. If it wasn't for you, we would never have freedom. You made freedom for us. You sacrificed your own life."

Reading the letter for the first time more than a decade ago, Grasberger was moved to tears.

"It really tore my heart up when I saw it," he recalled. "I just couldn't believe a child could write a letter about a war."

The message, plus the pencil and crayon drawing of an American flag and Army helmet that accompanied it, resonated deeply.

Although Priest, now 21, knew little about the war or the veteran to whom she wrote the letter, "I always looked up to people in uniform, so I took it really seriously," she recalled.

She didn't realize, though, that the recipient would take her letter very seriously, too.

'I was determined to find the girl'

Grasberger was eager to connect with the kind girl and decided to draft his own note to her in response.

"You really made me feel very good about fighting the war," he wrote. "War is a terrible thing but if it helped to keep you and many others 'free' it was well worth it."

Grasberger's wife, Delores, mailed the letter to Priest's school, though the couple never got confirmation that she actually received it.

As years passed and they still hadn't heard anything, "I was determined to find the girl that wrote that letter," Grasberger said.

"We looked all over on the computer and asked friends to keep their eyes open," echoed his wife, adding that they called the school several times, but staff members were unwilling to provide the student's contact information. Eventually, the school – Irving Elementary – closed down.

Despite failed attempts to find her, Grasberger continued to keep the letter close to him at all times. He prayed with it at night.

"I look at it very often, and I show it to other people," he said.

Over the summer, Grasberger presented his cherished letter to Jill Pawloski, the resident services director at Vitalia Senior Residents at Strongsville. The Grasbergers – who have been married for nearly 75 years and have two daughters, two grandchildren and two great-grandchildren – reside there.

"He told me the story about how he received the letter in 2009," Pawloski said. Even 12 years later, "he was just so touched that his service meant something to someone."

Grasberger also expressed his unrelenting wish to find the letter writer. Knowing how much it meant to him, Pawloski resolved to track her down.

"I was just so moved that he was holding onto something so small that other people might have crumpled up and thrown away," she said. "If anybody deserves this little moment, it's definitely him."

She surfed on social media, and after a few quick searches, she found a profile on Instagram that seemed like a possible match, given the name and that the person looked to be about 21 years old.

Pawloski was unsure if she had the right woman, but "I decided to give it a shot and send her a private message," she said. "I hit the nail on the head."

Priest was stunned to see the message in her inbox. She knew exactly what letter – and veteran – the stranger was referring to.

"I was so excited," said Priest, who went on to join the Army National Guard.

She, too, had reflected on the letter over the years, and she did, in fact, receive the reply from Grasberger. She keeps his letter safely stowed in a memory box, filled with other sentimental tokens from her childhood.

"I read it from time to time and think about him," Priest said. "I always wanted to have a conversation with him because of everything he wrote in the letter."

Pawloski invited Priest, who lives in Sandusky, Ohio, to come surprise Grasberger at his home. She was on board right away.

Only three days later, on July 23, Priest showed up at the retirement community dressed in her military uniform with a dozen red roses in hand. Grasberger was told someone was coming to interview him about the letter, but he had no idea Priest had finally been found – or that she was there to meet him in person.

When she walked in the room, Grasberger immediately exclaimed: "You're not the girl?!"

The emotional surprise was captured on video and featured in a now-viral TikTok. When Grasberger finally grasped that he was with the young woman he had long been searching for, he turned to her, grabbed her hand and said: "I love you so much. I really do."

"It seemed like she was my third daughter," Grasberger explained. "That's the feeling I had."

They both broke down in tears. Grasberger showed her the letter she wrote 12 years ago, and likewise, she showed him the letter he wrote in response.

"This is a godsend," Grasberger said, as they sat across from one another, clutching tissues. "I never thought I'd see you."

Over the course of their nearly three-hour meeting, "I went through two boxes of Kleenex," said Grasberger, who was an engineer for 32 years after leaving the military.

While he reminisced about his time in the war and his treacherous experience in the Battle of the Bulge – the final major German military attack in Western Europe – Priest, who is now a mother, told him about her 6-month-old son, Kyro.

"He is so full of life," Priest said of Grasberger. "He is just an amazing person."

Part of the family

Since meeting for the first time in late July, their friendship has blossomed over regular phone calls, and Priest is planning to visit the Grasbergers again with her son in the coming weeks.

"She is one of our daughters. We looked 12 years for her, so we have to enjoy her now," said Delores Grasberger, 93.

For Frank Grasberger, meeting Priest has been one of many miracles in his life, he said. At 95 years old, it was the one thing that was still missing.

When asked if he now feels complete having found his long-lost pen pal, Grasberger nodded, grinned widely, and said: "Oh yes. Very much so."