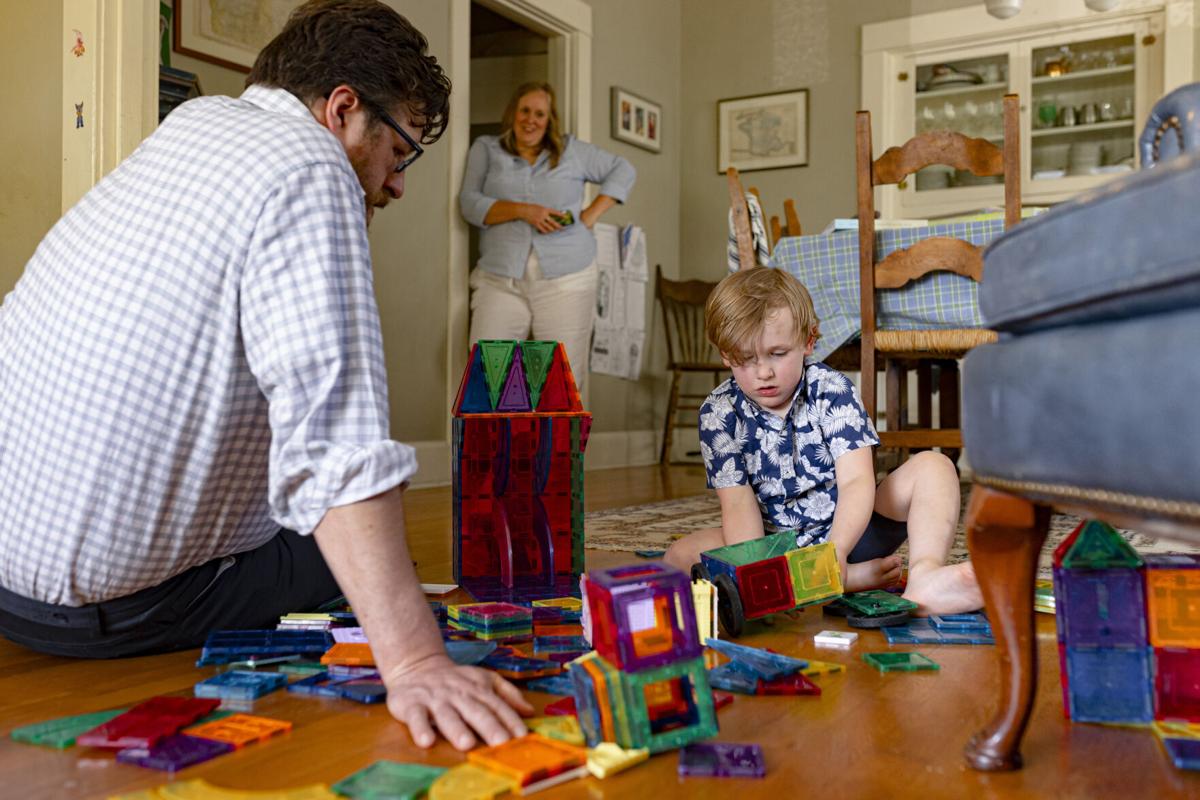 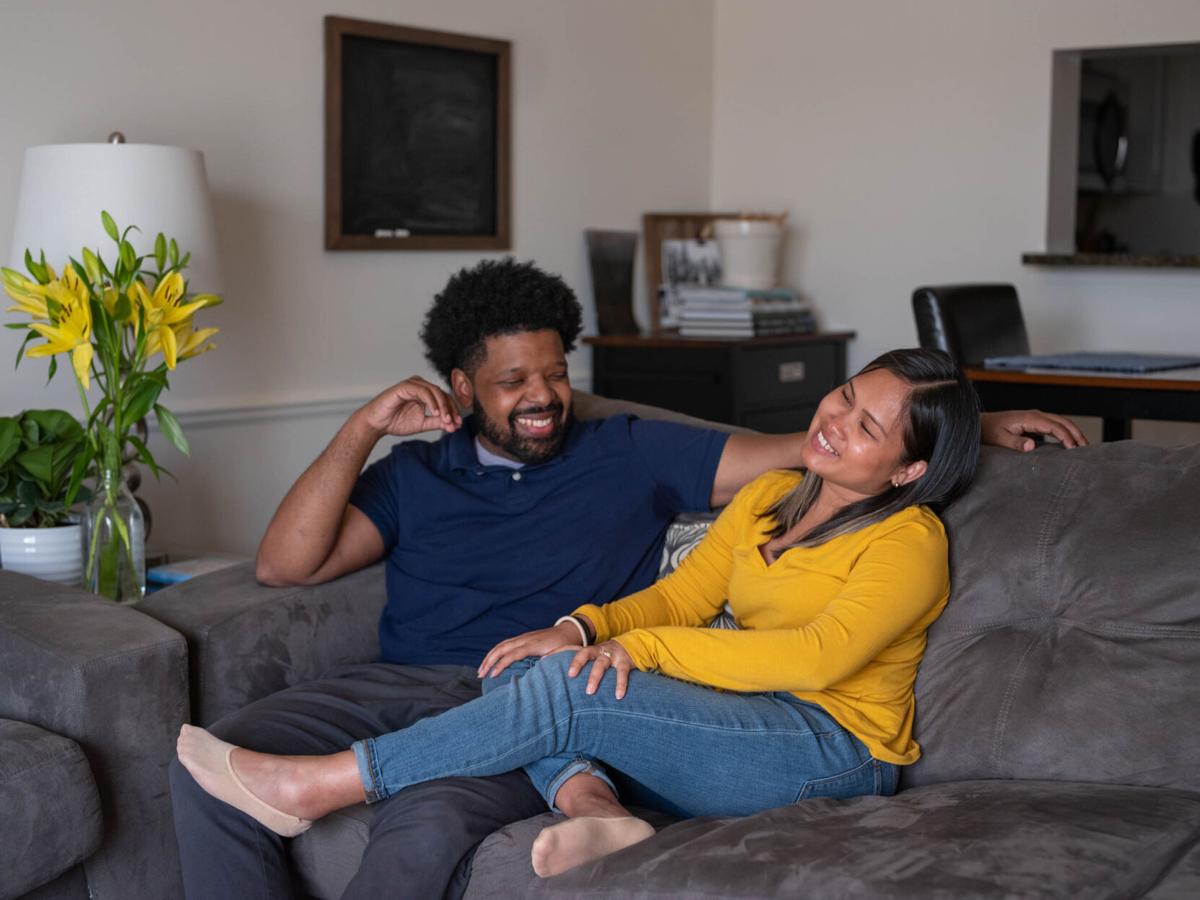 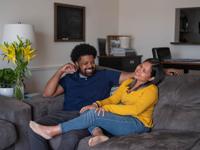 A NEW BALANCE: Chris Williams, left, a city planner and Sariem Am, right, a nurse practitioner, at home in Ann Arbor, Mich., on June 4. Ali Laptina/For The Washington Post 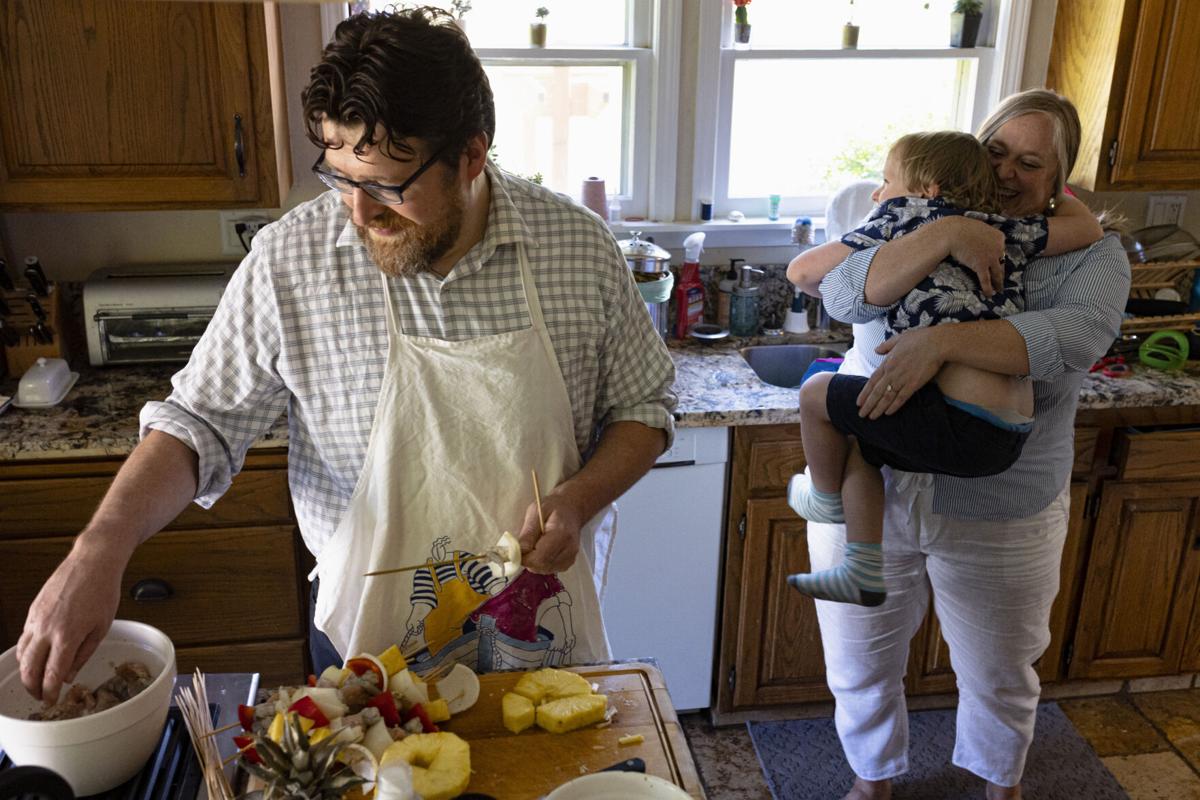 A NEW BALANCE: Chris Williams, left, a city planner and Sariem Am, right, a nurse practitioner, at home in Ann Arbor, Mich., on June 4. Ali Laptina/For The Washington Post

For some couples it's the dishes. For others, it's never-ending piles of laundry. If there are kids involved, it's day care pickup, bedtimes and homework.

For Ariane Holm Le Chevallier and Gabe Le Chevallier of Portland, Ore., the chore that loomed largest between them was cooking. In the early years of their marriage, it was easy to sort out: Gabe loves to cook, and when he worked from home, he would typically get something going as work wound down for the day.

Ariane, on other hand, avoids it when she can.

But then came their first child in 2016 and, for Gabe, a new job that required him to be in the office. With aspirations to make partner at his new law firm, Gabe's days got longer, and Ariane became the one charged with preparing dinner for the family on top of other domestic responsibilities.

It became a source of tension between the couple, who both had demanding jobs. As with many working parents, the two found themselves playing out variations of the same argument, over and over again. Ariane felt like she was taking on too much. Gabe didn't feel as though his contributions were seen.

Then came the pandemic, uprooting Gabe and Ariane's old routines and introducing a slew of new challenges.

Their now-4-year-old was now home all the time, a shift so overwhelming that Ariane's mom moved in to help ease the load. Hoping for greater flexibility and control over her work day, Ariane started her own consulting business. She quickly became flooded with work. Overwhelmed with anxiety, she asked her husband to "lower his expectations" of her.

Gabe, meanwhile, began taking the lead in housework and child care – a complete reversal of their old dynamic.

The shifts weren't easy, said Gabe: "Things just needed to get done. And I just took it upon myself to do it."

But the changes also provided a necessary reset, opening up conversations about mental health, burnout and balance that had once been so tenuous.

"There was a lot of grace that happened during the pandemic," Gabe said. "I don't think we necessarily gave each other the grace that we probably deserved before."

For many couples, the pandemic triggered a seismic shift in the home. Couples who caught only fleeting glimpses of each other as they filled their coffee thermoses in the morning found themselves listening in on each other's work conversations throughout the day. Children and parents, accustomed to day care and playdates and camps, for months had just one another to rely on.

It wasn't just increased time together complicating our relationships: Many couples navigated job losses, lost income, isolation from family and friends, and the deaths of loved ones.

In upending old routines, some couples were forced to reexamine what was – and what wasn't – working in their relationships. These partners say they discovered new ways of thinking about "balance," developing a deeper understanding and appreciation of each other.

The work of being a family

Eve Rodsky, author of the book "Fair Play," a guide for families who want to rethink the balance in their homes, says watching the pandemic unfold affirmed for her that the home could be "really dangerous" for women. It is the place where "women's work" – caregiving, household administration, cleaning and tidying – is taken for granted and overlooked.

A survey from the Pew Research Center suggests the pandemic didn't shift most people's attitudes on their relationships: Their overall satisfaction remained relatively unchanged in 2020 compared with 2019. But slightly more men (55%) reported feeling more satisfied with the division of household chores than last year – 49%.

Only 38% of women reported feeling the same way.

Rodsky explained that this is because women's time is viewed differently: it's deemed less valuable. This could be because they're not the breadwinners of their family, or their jobs are viewed as inherently more flexible, even when this is not actually the case. She added many people assume women are naturally better multitaskers.

In many different-gender couples, gendered roles become the default, taking the place of substantive conversations about how to divide the work of being a family.

Throughout their relationship, Sariem Am and Chris Williams in Ann Arbor, Mich., say they have worked hard to reject traditional gender roles.

As a nurse practitioner, Am had long and demanding days pre-pandemic, with a lot of residual work following her home: notes to complete and patient calls to make. Williams would intervene when he saw her pushing herself too hard to clean or cook, reminding her that he was capable of those tasks.

The guilt of not having enough energy to do things around the home was especially sticky for Am. Her mother had prided herself on her ability to care for her family, and expected her daughters to do the same. During their phone calls, Am said her mom would prod her to cook more for Williams.

"You live so much of your childhood, you know, in the shadows of your mother, who had certain beliefs and notions about how you should be as a woman, so that still lives there," said Am. "It's still something I'm trying to work through."

Before the pandemic, the couple found a balance they liked, one largely driven by their work schedules.

Williams would take charge of cooking and cleaning on Mondays, Wednesdays and Fridays, while Am, who worked from home on Tuesday and Thursdays, took the lead on those days.

But that balance flew out the window once Williams' office shut down and he began working from home full time. As an essential worker, Am's work schedule ramped up.

To Williams, a city planner, taking on more work at home didn't require a conversation, it was just common sense.

"I just feel like my job is like, 90% easier than hers," Williams explained. "I look at a screen all day and I write congestion reports."

The pandemic also made them highly sensitive to each other's health and safety. Williams worried constantly that Am might fall sick. Am worried about getting sick and passing it on to Williams. For months, Am would take off her scrubs at the door, only touching Williams after taking a shower.

Cut off from other family members, they were acutely aware that they only had each other, Williams said.

"And so we had to cling to each other."

Locked down with only your partner or your family, many Americans navigated new levels of intimacy – learning, sometimes in excruciating detail, what irritates, motivates and exhausts each other.

In September 2020, the annual American Family Survey, a joint effort by the Deseret News and the Center for the Study of Elections and Democracy at Brigham Young University, found that married people reported largely positive views of their own marriages, with 43% saying their relationships had grown stronger during the pandemic. Another 48% said they were "about their same."

Overall, fewer married people (29%) reported feeling that their marriage was in trouble in 2020 than the year before (40%).

This is common in major crises, Brad Wilcox, a professor of sociology at the University of Virginia who served as an adviser on the survey, told the Deseret News. The Great Recession, for all its turmoil, had a similar impact on many couples.

Before the pandemic, Yetti Ajayi-Obe and Nyame Smith were already charting a major life change: a cross-country move from Connecticut to Tucson. Months before the first coronavirus cases were reported in the United States, Ajayi-Obe began working remotely, only seeing Smith, her boyfriend, in the mornings and evenings.

Smith, an engineer, had long days because of an hour-long commute, and was trying to settle into a new job. It was an isolating time for Ajayi-Obe.

"I felt like the only thing I did was sit on my computer, work for the man, and then work for myself, and then clean and tidy up all this other stuff because I was home," said Ajayi-Obe, a trade systems analyst who also does mental health advocacy. On top of that, Ajayi-Obe, who is Nigerian British, said she was constantly on edge because of racism she encountered.

Smith chalked up some of their early arguments to not cleaning up enough when they first moved in together. But Ajayi-Obe actually enjoyed cleaning, she said – a self-described germaphobe, she looked forward to the alone time. Looking back on that period, Ajayi-Obe wondered if her loneliness influenced those arguments, which she described as "nerve-racking."

"I feel like every woman has this fear of being a nag."

Then Smith's office closed and he began working at home full time. At first were the physical adjustments: the living room now housed Smith's office set up, and in a small apartment, they had to be mindful of each other's work habits and Zoom calls – if a toilet flushed, or if Smith blasted music in the shower, chances are their co-workers could hear.

But by and large, the changes were welcome. Now that the home was also his office, Smith became more proactive with cleaning the living room and kitchen because he found it hard to be productive in a cluttered space.

They also became, in small but significant ways, more visible to each other – much more aware of each other's shifting moods and therefore, more responsive.

Now, they can't imagine going back to their pre-pandemic work routines.

Smith can't imagine slogging through hour-long commutes five days a week – not when he knows he can get his job done at home. Ajayi-Obe said she is mentally preparing herself for Smith to be around less: Who will she talk to all day? What will happen to their midday walks?

Before the pandemic, "I used to joke around all the time, like, 'You're my boyfriend, you're not my friend,' " she said. "And he's become my best friend."

Ajayi-Obe and Smith aren't alone. Ariane Holm Le Chevallier and Gabe Le Chevallier, the couple from Portland, Ore., are also grateful for the reset. Though they are a bit anxious about falling into old routines – the arguments, the resentment – navigating the highs and lows of the pandemic has made them more confident in their ability to chart the reopening. Gabe hopes to work from home – and cook – more frequently.

For couples anxious about the reopening and the inevitable changes it will bring to routines and relationships, Rodsky, the author and relationship expert, has some advice.

She recommends couples completely reimagine how they approach the home, focusing on boundaries, systems and communications – the same structures many take for granted at work. They should be guided by some core principles, she said: that each deserves as much choice over their time as the other, and each is a stakeholder in the home.

"It doesn't have to be 50-50 because that's scorekeeping, and nobody even knows what that means," said Rodsky.

Over the course of her career, Rodsky has found one question particularly clarifying – one that was salient for many couples during the pandemic, when they were tethered to homes that had become workplaces, classrooms, day cares and sanctuaries.

"What would happen if we treat our homes as our most important organization?"

This story first appeared in The Washington Post's The Lily publication.