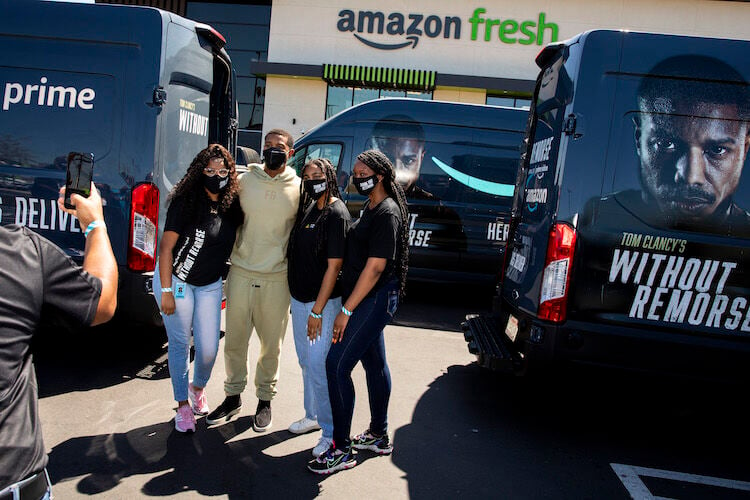 HELPING OTHERS: Amazon Fresh store associates and nonprofit partner Village for Vets volunteers posed for photos with actor Michael B. Jordan, who stopped by during the promotion of the launch of "Tom Clancy's Without Remorse," on Prime Video, to help load care packages of food and household items at the Ladera Heights neighborhood store in Los Angeles, CA, Thursday, April 29. Jay L. Clendenin/ Los Angeles Times/TNS 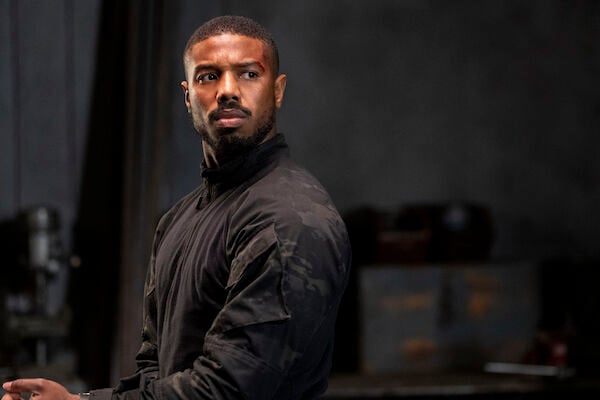 HELPING OTHERS: Amazon Fresh store associates and nonprofit partner Village for Vets volunteers posed for photos with actor Michael B. Jordan, who stopped by during the promotion of the launch of "Tom Clancy's Without Remorse," on Prime Video, to help load care packages of food and household items at the Ladera Heights neighborhood store in Los Angeles, CA, Thursday, April 29. Jay L. Clendenin/ Los Angeles Times/TNS

The grocery chain partnered with the nonprofit Village for Vets, an organization that provides meals, emergency grants and other kinds of support and services to homeless and at-risk veterans in and around Los Angeles. The nonprofit has provided nearly $250,000 in emergency financial assistance and delivered nearly 6,000 meals a month to veterans in need. With Amazon’s support, Village for Vets was able to meet its monthly goal of delivering 1,000 boxes of food across the city.

“This has been a challenging year,” said Marcie Polier Swartz, the founder and CEO of Village for Vets. “We hope this partnership brings awareness to the growing needs of the veteran community and inspires others to give back.”

“We definitely have to pay (closer) attention and do a better job of (understanding) what the process is like for veterans when they come home,” said Jordan, whose father was a Marine, in advance of the event. “They train, get molded (by the military) and give all of themselves to be of service. And when they get back, we have to do a better job of making sure they’re welcomed back and getting the things they need to assimilate back into civilian society.”

The event Thursday was organized to help deliver care packages of food and household items from local Amazon Fresh grocery stores to more than 600 LA-based veterans across 24 housing projects, with deliveries made by the veteran-owned Amazon Delivery Service Partners.

For Jordan, whose father volunteered at a food bank for years, the desire to be of service was instilled in him from a young age. “I just want to connect with the community as much as possible,” he said. “Making movies is a blessing, it’s a gift. So to be able to give back when I can and really make that connection and shorten the gap (is meaningful).”

The unique opportunity to tie his film’s release to a worthy cause likely wouldn’t have happened at all if “Without Remorse” had continued on its original trajectory as a theatrical release from Paramount Pictures, initially scheduled to open last September. When the COVID-19 pandemic shut down theaters, Amazon stepped up to acquire the film. And Jordan’s production company, Outlier Society, subsequently signed a first-look film deal with the digital powerhouse in February.

In “Without Remorse,” Jordan plays John Clark, a Navy SEAL out to avenge his wife’s murder. Though he didn’t read the book the film is based on, Jordan says he’s a huge fan of the late Clancy’s adapted works and has long been interested in making the jump from leading man to action star.

“I grew up playing (Tom Clancy’s) ‘Rainbow Six’ video game,” he said. “And I spent hours playing (Clancy’s) ‘Ghost Recon’ and always envisioned myself in an action movie like this. As a kid, those were the movies that I watched and loved. So when I had an opportunity to step into the Clancy universe and take on this character with a fresh, modern take, I jumped at it.”

To prepare for the role, he spent time talking to veterans about the mental health difficulties they’ve experienced.

“It’s heavy and intense to hear what they’ve seen and lived through on a daily basis out there,” he said. “It haunts them, but there’s also a sense of pride and honor. There’s a code and a love they have for what they do that is unmatched. Being able to talk to some of them and hear a little bit of what they go through, I have nothing but respect for them. It’s truly incredible.”

He also dissected action sequences with his dad, spent weeks in Utah and Mexico undergoing tactical and weapons training and sought the counsel of Marine veteran Buck Doyle, who has served in Iraq and Afghanistan and “been in his share of tough situations.”

“All the things you see me do in the movie are things I had to actually work through and train for,” said Jordan. “I had the best guys from their fields really put the time in to help me get comfortable and prepared.”

Although one memorable scene in the film features Jordan brazenly stepping into a burning car, he says the most difficult sequence was one that required him to swim through a submerged commercial airplane. He was trained by Special Force Navy SEALs divers in dealing with equipment malfunctions and other stressful situations underwater, but the physically taxing, water-based stunts left him feeling hungry and tired all of the time.

“You have rigs snapping open, poor visibility and I didn’t have goggles so I was under there without any protection over my eyes,” he recalled. “There were safety valves and air (pumps) planted just in case a problem went down, but it took us a couple of weeks to shoot all those things. Just the day in, day out of putting my body through that type of stress wore me out.”

By the end of filming, Jordan was able to hold his breath underwater for just over three minutes. But now, “I don’t even know, but it’s not that good,” he said with a laugh.

Although a huge action spectacle like this was clearly designed for the big screen, Jordan says he’s just grateful the film is able to be seen after a year of uncertainty. “I feel extremely fortunate and blessed that we found a home at Amazon,” he said. “We finished shooting this movie right before everything that went down with the pandemic and for a minute we didn’t know whether the movie was going to come out. We had to make real-time decisions about this movie.

“I think this last year a lot of things have evolved in our industry (regarding) what a traditional movie release looks like,” he added. “Now that vaccines are rolling out and people are getting back to whatever the ‘new norm’ is going to be, hopefully there’s going to be a balance between movie theaters and streaming. I’m really interested and curious to see where things go.”

A sequel to “Without Remorse,” tentatively titled “Rainbow Six,” is already in development but it’s unclear when production might start. Up next, the actor will step behind the camera to direct his first feature, 2022’s “Creed III.”

“I’m excited,” he said. “I’ve been daydreaming about this for a long time. I think (having) grown up in the industry, I’m at a place where I feel strongly enough about a story and character that I want to be the storyteller. This is it for me: this world, this character. I think we have things to say with Adonis’ story moving forward and I’m hype. I’m as ready for it as I’m going to be.”

While he has only directed a couple of commercial spots in the past, “I guess I’ve directed in my head a lot,” he said. “I think I’ve been involved with processes and projects, not technically as far as the credits are concerned, but I’ve felt like it.”

In preparation he’s been reaching out to “everybody,” he says, drawing on the relationships he’s made since he became a professional actor at the age of 12 — the start of a career that has ranged from TV’s “The Wire” and “Friday Night Lights” to Ryan Coogler’s award-winning drama “Fruitvale Station” and blockbuster “Black Panther.”

“I think I’ve reached out to every director I’ve ever worked with,” Jordan says. “I’ve been blessed with having a community of filmmakers that I have relationships with and everybody’s been really generous in helping me along. Everything has been a learning process. I think my entire career leading up to this moment has prepared me for it.”

As for the next steps on his career journey, Jordan says he hopes to continue to act while adding other skills to his resume. “I have ideas and I loosely think about things I want to do in the future,” he said. “I definitely want to continue to be a leading man, hopefully that’s something that’s here to stay. And I want to add other things to the list during my time on this planet. I think being able to do other things that I’m interested in is important for growth. And I’m looking forward to whatever God has in store for me.”

On Monday, 11 Guamanians graduated from the Guam Community College Truck Driving Boot Camp and into new career opportunities - something that … Read more

Choose a quality summer program for your children

With school ending in a couple of weeks, many parents islandwide are beginning to search for a summer program that will offer their children a… Read more