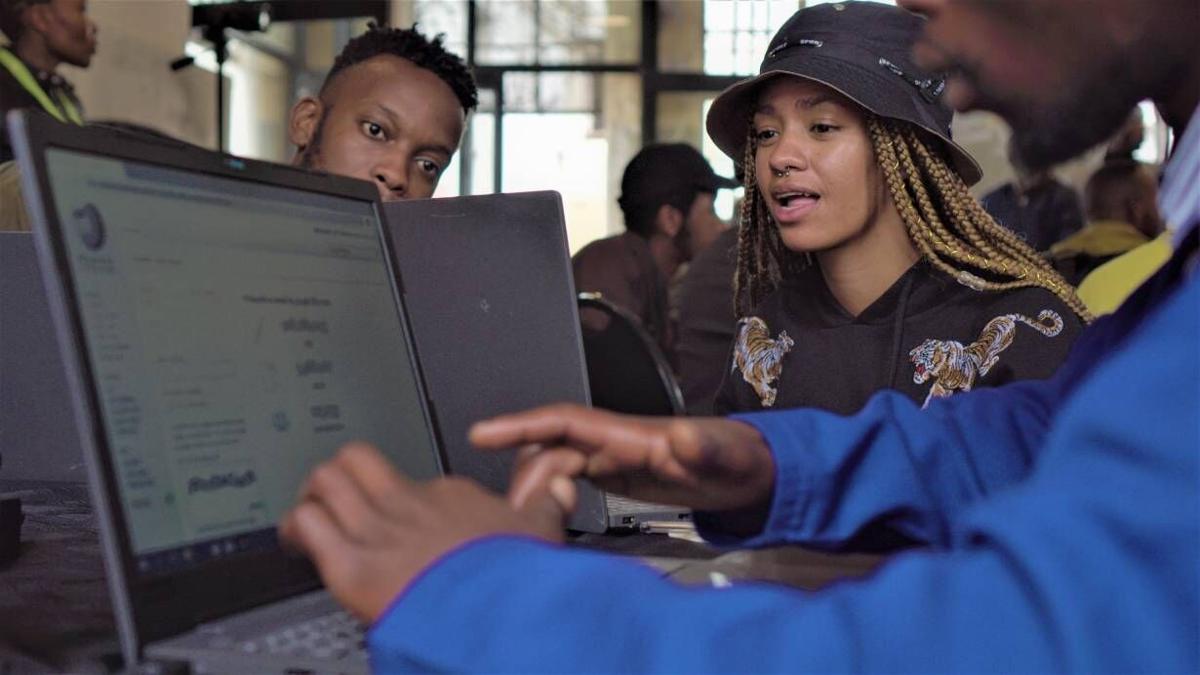 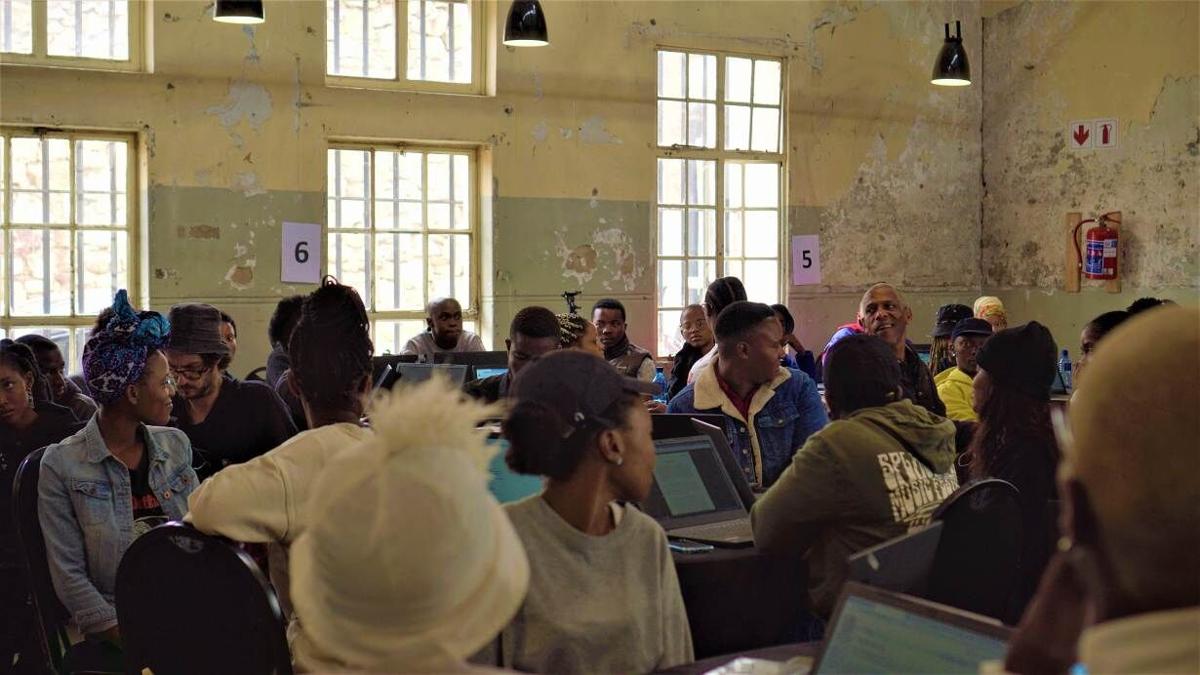 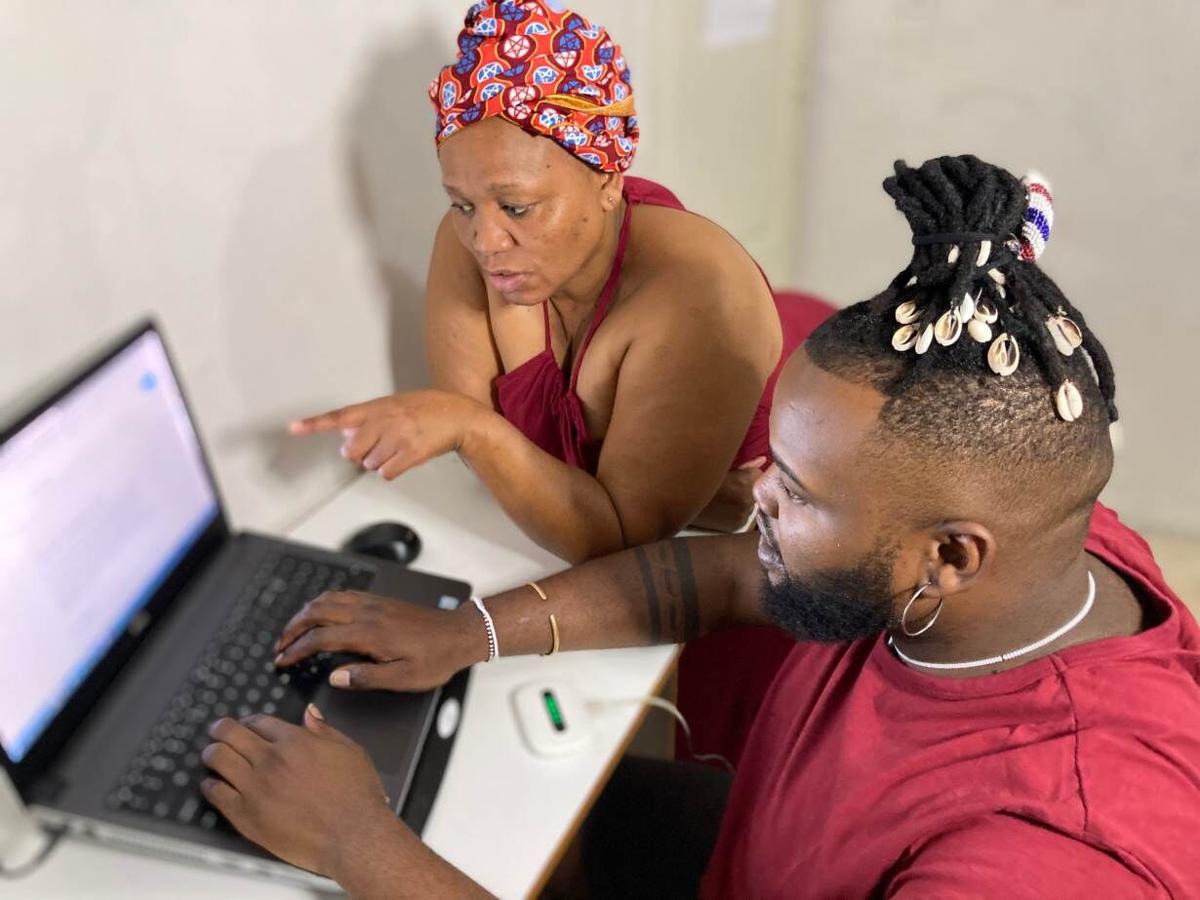 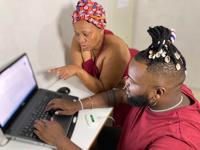 EDITING: Perrymason Adams edits a WikiAfrica article with the help of his mother Jane in Pretoria, South Africa, on March 25, 2021. Handout via Bulelwa Dyasi

EDITING: Perrymason Adams edits a WikiAfrica article with the help of his mother Jane in Pretoria, South Africa, on March 25, 2021. Handout via Bulelwa Dyasi

JOHANNESBURG/TULSA — The words "face mask" and "hand sanitizer" are now familiar the world over, but for isiZulu speakers in South Africa those terms did not exist a year ago, until a group of volunteers took to the internet to create them.

From Wikipedia posts in indigenous tongues to digital word libraries, African language lovers are going online to preserve and create words and content for future generations – an effort that has been given added urgency by the coronavirus pandemic.

"Language is very important, it's the tool we use to communicate our understanding of the world," said Perrymason Adams, 29, an accountant in South Africa who volunteers with WikiAfrica, a project to increase Wikipedia content in African languages.

With recurring lockdowns around the world to stem the spread of COVID-19, rights groups warn that the digital divide separating those who can learn and work online from those who cannot deepens already existing inequality.

Online access is growing rapidly in sub-Saharan Africa, with internet penetration in the region surging to 25% of the population in 2019 against less than 1% in 2000, according to the World Bank.

But research shows even Africans who can get on the web often struggle to find content they can relate to.

According to the World Economic Forum, one of the main reasons many Africans do not go online when they can is "lack of content in local languages."

This is a big drive behind WikiAfrica Education, which since it was launched by the Moleskine Foundation in 2006 has contributed more than 40,000 written entries, as well as images, audio and video files, to the widely popular online encyclopedia.

During the pandemic, translating information around social distancing, masks and sanitizers has become crucial, said Adams, who has volunteered to translate material to isiZulu and isiXhosa, another South African language.

Adams was "mind-blown" when he heard of the initiative two years ago and wanted to keep translating articles during lockdown – on the origins of the new coronavirus, lockdowns and face masks.

"I knew this information could be life-saving, I felt like I was being a language activist," he said, noting that he speaks four languages at home with his family and did the isiZulu translations with his mother.

Volunteers for the WikiAfrica program translate online content into nearly 20 African languages, including Twi, Swahili, Afrikaans and Dagbani, according to a spokeswoman from the Moleskine Foundation.

The translated articles have been viewed more than 500,000 times, says the nonprofit, which focuses on cultural projects and helps train translators across the continent.

At the start of the pandemic, the organization's officials noticed the amount of content about COVID-19 on Wikipedia in African languages was lacking, said chief executive officer and co-founder Adama Sanneh.

"So we created a campaign to say to all the African-language speakers from the continent (and) from the diaspora to say, 'If you know the language, please translate some of this content from English or French or Portuguese,'" he said over Zoom.

Part of WikiAfrica is about "democratizing information," said Lwando Xaso, a lawyer and activist from Constitution Hill Trust, an organization promoting the South African constitution that partnered with the program.

"I think the urgency of the virus is that no one should be outside of their information bubble," Xaso said.

And last year, 30 young Africans came together to translate COVID-19 public health guidelines into 18 of the most common African languages after University of Cambridge researcher Ebele Mogo took to social media to call for translation assistance.

When COVID-19 was first recorded in her home country of Nigeria, Mogo worried about the spread of misinformation, such as tips to eat garlic or take hot baths to ward off the virus, according to the website for her project.

"For those frightened by the prospect of not being able to protect themselves and their families, it can be all too easy to take the wrong advice," she said on the site.

Outside of the pandemic, since 2011 Boston University has been building up repositories of digitized, endangered West African manuscripts.

These initiatives are invaluable, said Mahlatse Hlongwane, 24, a student and WikiAfrica volunteer from South Africa's Limpopo province, who said she found new Sesotho words related to the pandemic by listening to the radio and hearing new terms being used informally.

But, she added, people need more data-free websites to access the content on their mobile phones, especially in rural areas where information is scarce.

"I would love for people to know that information is online for them," Hlongwane said.

To boost the spread of information in South Africa's 11 official languages, Wikimedia South Africa, a nonprofit organization, has partnered with the Moleskine Foundation to hold "edit workshops" to teach people how to properly edit Wikipedia entries around various themes.

For example, he noted, uploading a photo of a statue could be considered a copyright breach in the country, a law the group is advocating to be changed.

"It is all about visibility," said Adams, the volunteer in Pretoria.

"It is about writing them (African women artists) back into history ... so a reader can be inspired and see themselves and say, "Oh, wow!" And it opens up a world view of what is possible," he said.

In South Africa, language was used by the apartheid government as a way of controlling the Black majority population, Adams noted.

Under the Bantu Education Act, enacted in 1953, students were divided along racial lines and forced to learn in Afrikaans, a language born of Dutch settlement in the country in the 17th century.

"Due to our history, a lot of people, identities and cultures were erased," Adams said.

"It is really important to feel you exist, that your presence is acknowledged, that you are seen as human, as a person."