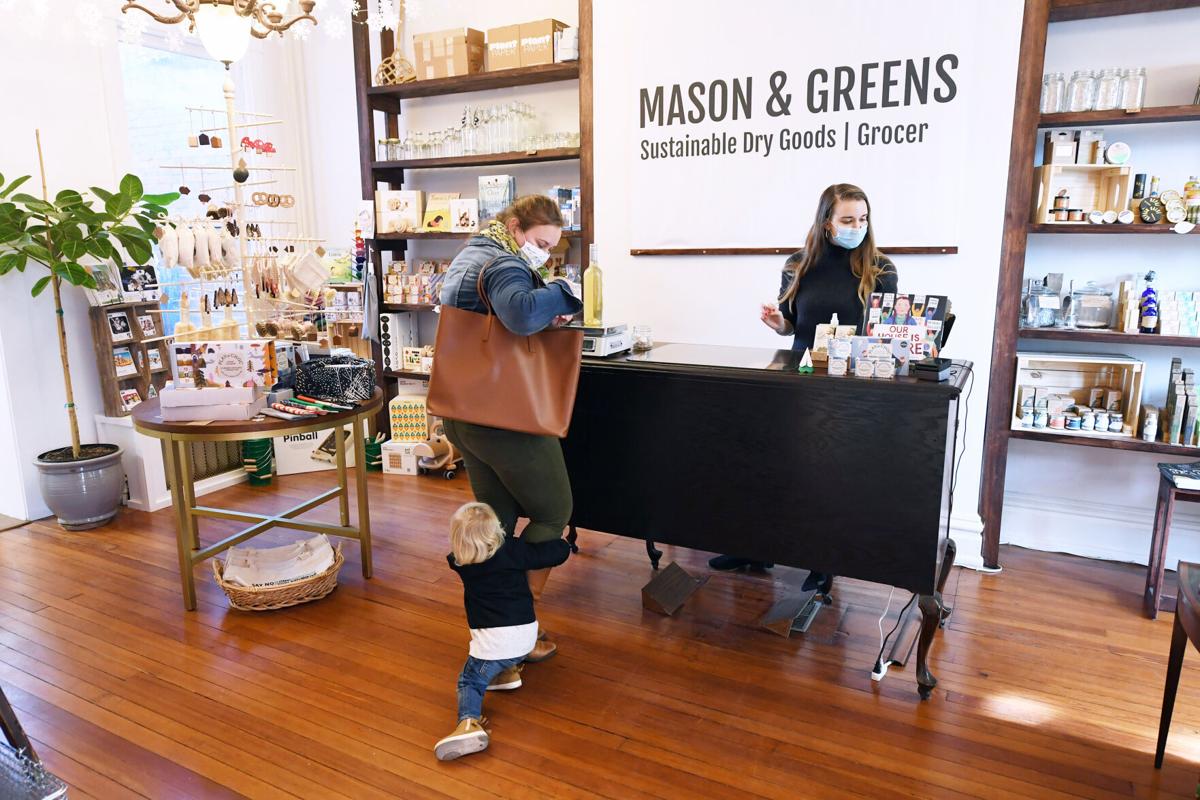 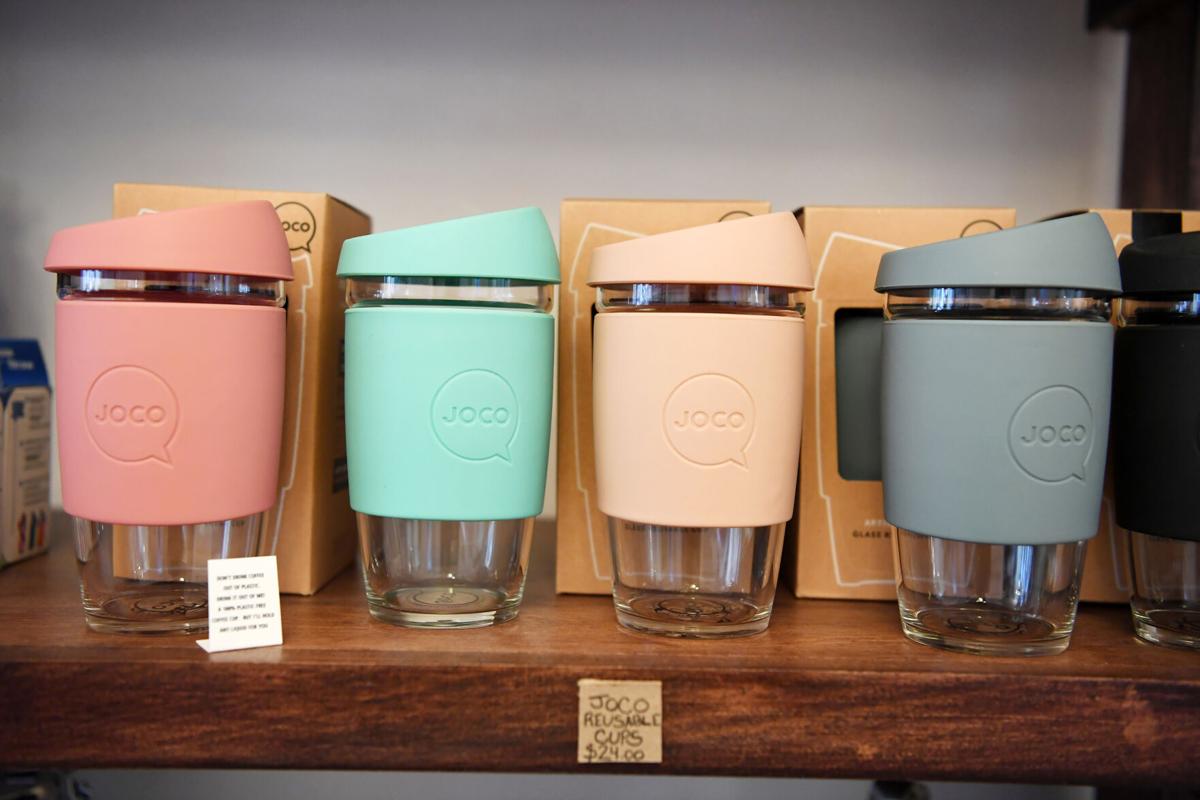 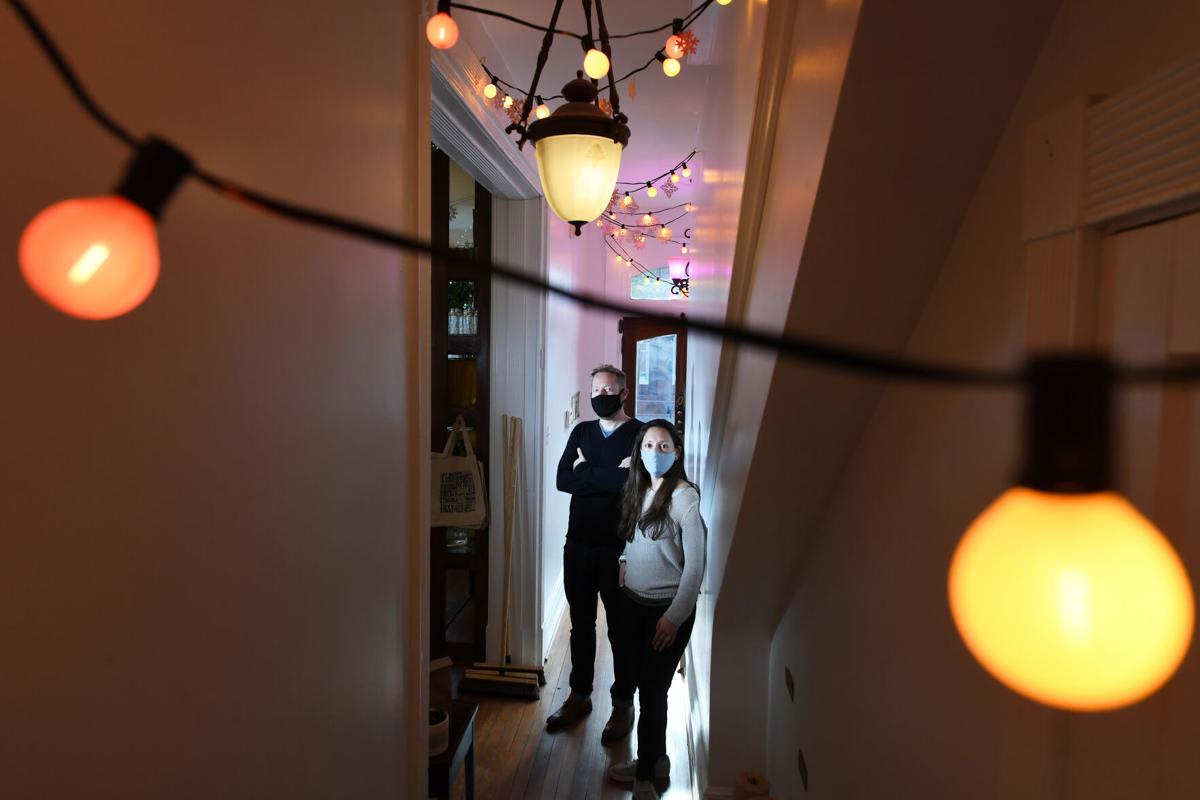 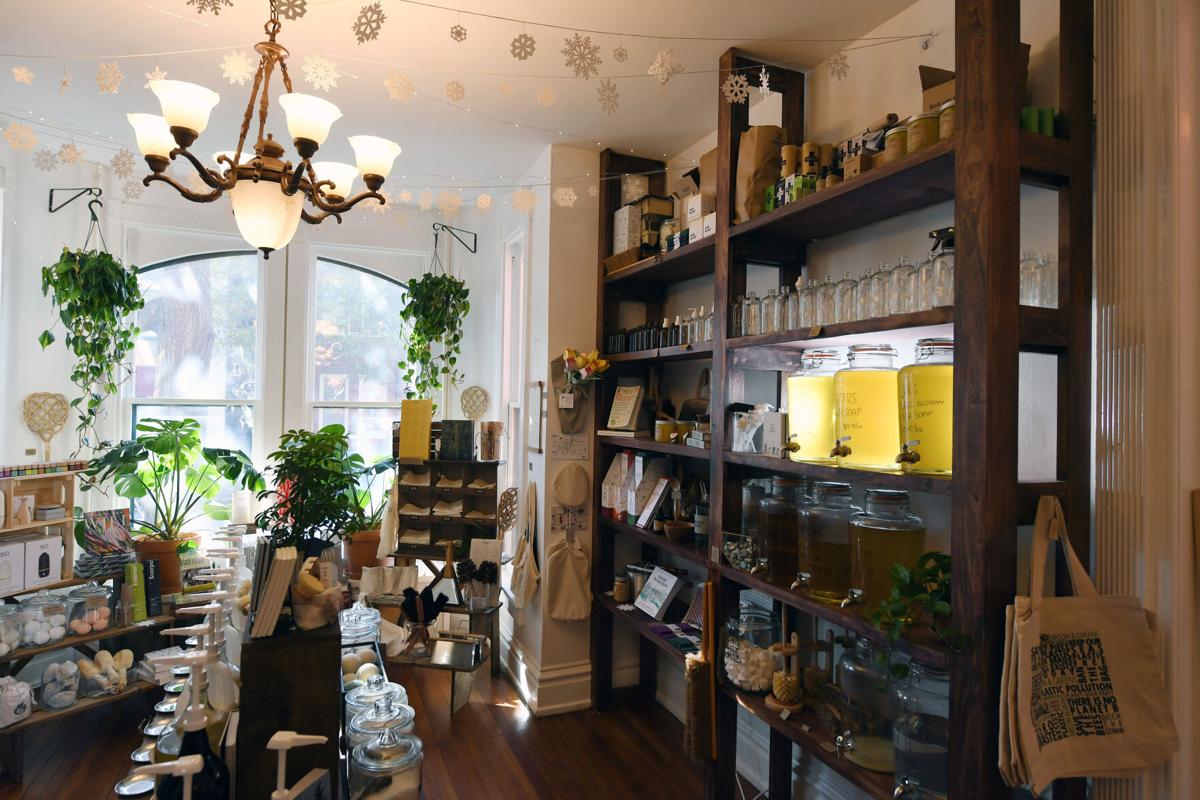 Justin and Anna Marino's journey to a zero-waste lifestyle began over pork sausages in Germany.

Anna, who had been looking into the health benefits of a vegan diet, told her husband that when they returned home from vacation, meat would be officially off the menu.

But eschewing animal products was just the beginning. Soon after, their attention turned to trash.

"It was kind of like a slow-moving coup on my part," said Anna, 32, a former seller on the website Etsy, who started researching the meat industry and the zero-waste movement. Even though they were only a family of four - the couple have two children, ages 6 and 3 - they knew they needed to change their lives.

Paper towels and single-use napkins were the first to go. Then went the plastic. "We were generating about one or two tall kitchen trash bags full of garbage per week," said Justin. "We would take it out to the curb and, you know, out of sight, out of mind, right? You don't think about it. But then when you start thinking about it, that's when things start changing."

But as they traded traditional products for more eco-friendly items, they quickly realized that their reliance on online shopping was another problem.

"It almost defeats the purpose," said Justin, 43, who previously worked in cybersecurity. "I'm ordering something to save the planet, but in order for it to get here, it's creating a pretty nasty carbon footprint. . . . And so, we were like, well, there needs to be a store around here."

The airy shop is equal parts organic grocer and minimalist boutique, selling items such as package-free shampoo bars, organic produce and drip-irrigated olive oil. Hanging plants and shelves lined with stainless steel containers and books titled "All You Need Is Less" offer shoppers a glimpse into the world of low-waste living.

Although the zero-waste movement, which looks to minimize garbage through reducing consumption, reusing materials and recycling residual waste, has been around for decades, it's finding new prominence as concern about the environmental impact of trash - particularly plastic pollution - continues to grow.

"You know it's a movement when you don't know everything that's going on," said Gary Liss, vice president of Zero Waste USA, a nonprofit organization dedicated to reducing waste, who described the growing interest in low-waste living as a sea change in the relationship between people and things.

Americans throw away about five pounds of trash per person per day, according to the Environmental Protection Agency - 12 percent of which is plastics.

Although plastics have greatly enhanced daily life - extending the shelf life of food and improving medical care - they've grown ubiquitous, used to make products such as clothes as well as cars.

Some plastics are recyclable, but scientists estimate that up to 91 percent of plastic is never recycled, leaving the rest to burn in incinerators, clog landfills or degrade in the oceans. Scientists have even found microplastics in air, water and food.

"If we fail to act, by 2050, there will be more plastics in our oceans than fish," said Sander Defruyt, who leads the New Plastics Economy initiative at the Ellen MacArthur Foundation, referencing a 2016 report.

The coronavirus pandemic has only increased reliance on disposable plastics. Billions of masks and gloves made from plastics and used by health-care workers, first responders and essential workers are being discarded every month, studies show.

Some retailers have been requiring customers to use plastic bags instead of reusable bags and have replaced bulk offerings with individually packaged goods. Multiple states rolled back bans on plastic bags to cope with heightened concerns around hygiene - all while greasy takeout containers, single-use shopping bags and packaging materials overflow trash bins across the country.

The plastics industry maintains that plastics in respirator valves, personal protective equipment, vaccine syringes and food packaging have been critical during the pandemic.

"Society has a plastic waste problem, not a plastic problem," Joshua Baca, vice president of plastics for the American Chemistry Council, said in a statement.

As scientists have learned more about covid-19, the disease caused by the coronavirus, they've found that transmission is largely person-to-person and not through surfaces, although some studies found that the virus can live for prolonged periods on plastic surfaces.

"We're conditioned that plastic is clean and that plastic is what everyone needs to use to make things sanitary," said Justin, who expressed concern about the potential health effects of chemicals in plastics as they degrade.

"Ultimately, I think that the sort of paradox here is that these things that we think are sanitary and clean may possibly be leaching chemicals into the products that we consume . . . and then passing that load of chemicals when you're done onto the planet," he said.

Mason & Greens, which is based in part on the bulk model, makes a point of avoiding plastics at nearly every turn. Beans and grains come in gravity dispensers. Produce is package-free. Pomberry Kombucha and pinot noir stream from a tap. The spices are self-serve.

Customers aren't required to bring their own bags or refillable containers, but the couple said many customers do. The shop employs a tare system that logs the weight of an empty container and then calculates the price of products by the ounce.

Purchase what you need

Pricing products this way reduces waste by allowing customers to purchase only what they need and in reusable containers, the couple said.

The couple welcomes newcomers into their waste-free world, but Anna routinely castigates vendors for their packaging practices - she is not above shaming suppliers who send items wrapped in plastic. "Everybody gets an email," she said. "I have to go through so much to get a product into the store that's zero-waste or low-waste."

But living a waste-free life might soon become easier. As consumers demand more sustainable options, brands large and small are shifting to make sustainability central to their strategy. Major companies such as Unilever have pledged to halve the use of virgin plastics in packaging by 2025. Walmart, Target, CVS and other retailers are working to develop an environmentally friendly alternative to the plastic bag. And other companies are starting circular delivery services - an updated version of the 1950s milkman - where groceries and goods are packaged in reusable containers that are returned empty.

Business was brisk because the pandemic accelerated the e-commerce model, upon which Wild Minimalist depends, although Cameron also has a brick-and-mortar store in San Rafael. Millennials, who now wield hefty purchasing power, are acutely aware of the climate crisis - and that combination has made them Wild Minimalist customers, Cameron said.

"The change that we expected to see take place over a period of five years has happened in a period of three months," he said of the pandemic's effect on his business. "We're basically riding that wave right now."

Although Cameron acknowledges that shipping products all over the nation has environmental costs, he said the shop uses only recyclable or compostable packaging and tries to reuse shipping materials whenever possible.

In an ideal world, he said, "you want to see people bicycling to their zero-waste store every time they need something. . . . On the other hand, we're in this economic climate right now where traditional retail is not where it's at."

Despite the challenges of brick and mortar right now, Mason & Greens is also growing. The Marinos opened their shop just days before Gov. Ralph Northam, D, issued Virginia's first stay-at-home order, forcing them to lean on online shopping more than they had planned.

Business has been extraordinary, they said. The store opened for in-person shopping in June and has been "in the black" since they started, Justin said. The couple plans to open a second location, in D.C., sometime next year.

For customers who previously had to hopscotch among farmers markets, grocery stores and retailers to reduce their waste, Mason & Greens offers one-stop shopping.

"For me, living our values frees my mind," said Daniela Ochoa González, 39, a D.C. resident and founder of an environmental consulting firm who is teaching her school-age children to live zero-waste lifestyles.

González said the shop's bulk shopping model encourages her kids to touch, smell and explore. "It's like a little school lab," she said. "They can actually see what a grain looks like, quinoa looks like, what flour looks like."

While bloggers Bea Johnson, the author of "Zero Waste Home," and Lauren Singer, who famously fit all the waste she produced over four years into a 16-ounce Mason jar, have attracted devotees, adhering to a trash-free lifestyle can feel impossible.

"Basically, it's unreasonable," Cameron said. "It's not true, first of all. There's always upstream waste."

The movement can also feel inaccessible to those without disposable income. González acknowledges that zero-waste shopping can cost more, but she sees it as an investment in her children's future.

Although the Marinos say a Ziploc bag or plastic toothbrush may always be cheaper than their stainless-steel or bamboo alternatives, they view the benefits of reusable products as far outweighing the cost - and in the long run, they say, reusable products may even be less expensive because customers won't have to replace items as frequently.

"We don't sell products that will be trash in a week," Anna said.

Even still, accessibility was important to the Marinos, who say their prices are competitive with those of major retailers. "You cannot make any progress with environmental issues if it's not economical," Justin said.

The Marinos hope Mason & Greens will have a ripple effect beyond its walls. Today, they estimate they fill a single trash bag about once every two weeks - which is pretty good, said Anna, if you consider they have seven employees and are open seven days a week.

"I think what we're doing here in Old Town is that we're actually opening up people to this new way of life," said Anna, who hopes their shop can inspire others to do more good with less.