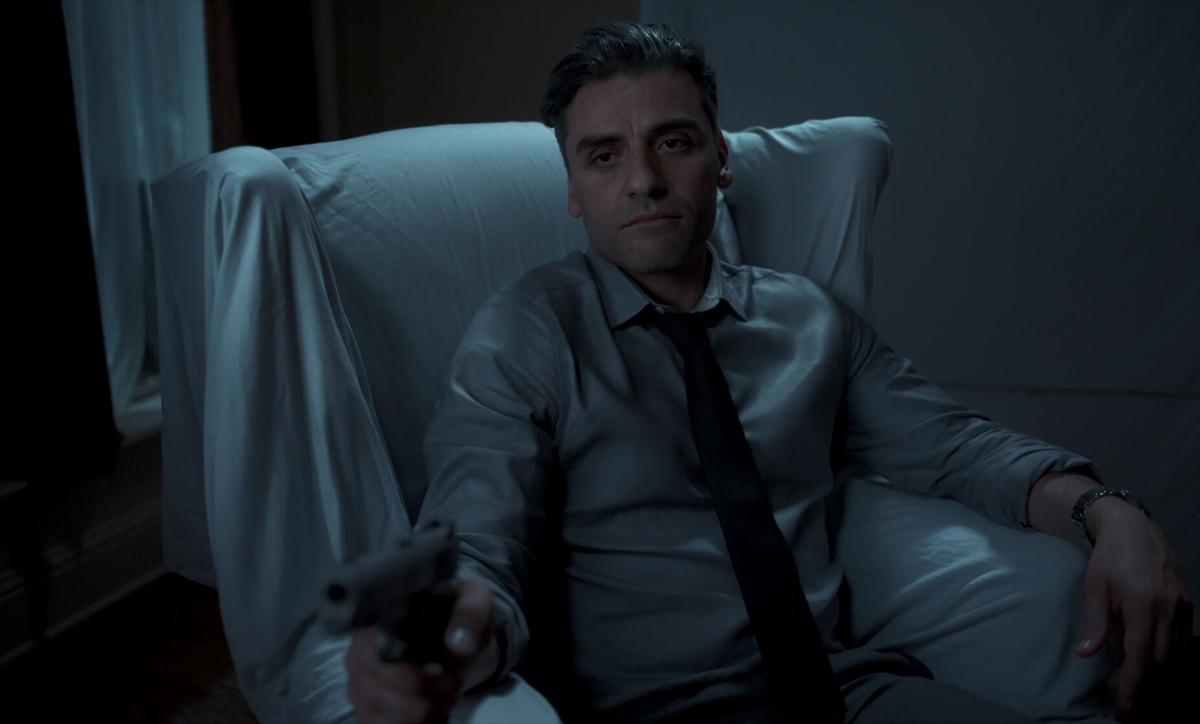 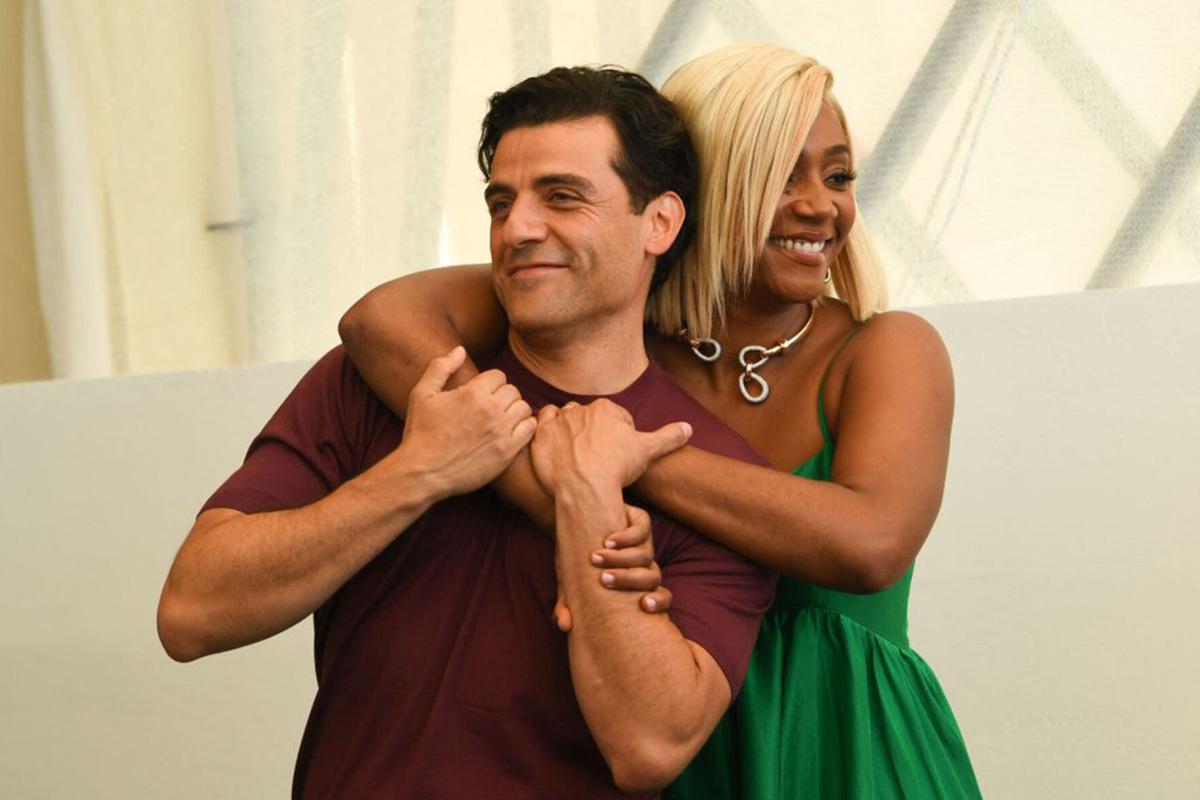 CO-STARS: Oscar Isaac and Tiffany Haddish hold each other at a photocall for the film "The Card Counter" presented in competition during the 78th Venice Film Festival, on Sept. 2, 2021, at Venice Lido. Filippo Monteforte/AFP via Getty Images

CO-STARS: Oscar Isaac and Tiffany Haddish hold each other at a photocall for the film "The Card Counter" presented in competition during the 78th Venice Film Festival, on Sept. 2, 2021, at Venice Lido. Filippo Monteforte/AFP via Getty Images

So many of God's lonely men populate Paul Schrader's films. They're inveterate self-torturers and diary-fillers, often murmuring in voice-over what they cannot tell another human being.

"God's lonely man" was the Thomas Wolfe phrase used by Travis Bickle to describe his lot in life in the 1976 Martin Scorsese masterwork "Taxi Driver," which made Schrader's reputation as a screenwriter. Most recently, as writer and director, Schrader shot "First Reformed." That inspired, half-mad rumination was not only Ethan Hawke's finest couple of hours to date; it was proof that a filmmaker, revisiting familiar themes, obsessions and literary and cinematic influences (Fyodor Dostoevsky, Robert Bresson, Carl Dreyer) could pull a bracing variation on the notion of an existential loner on the edge.

Now, as writer and director, Schrader has made "The Card Counter." Disappointing news first: It sometimes feels like two ideas welded, uncertainly, together. One is bluntly polemical, dealing with America's geopolitical sins in the years following Sept. 11. The other idea is a compelling simmer of a character study.

Here's the heartening news: As the title character – a professional gambler with a lot behind him, and not much impulse to dredge it up – Oscar Isaac makes for a magnetic sphinx indeed. His is not the only good performance. But it's the crucial one.

William Tell is the name the Isaac character uses, Bill for short. In the movie's present, Bill recently has wrapped up eight years in prison. In Iraq, assigned to the infamous Abu Ghraib detention center, he worked under the tutelage of a private contractor (Willem Dafoe) given free rein to conduct his "enhanced" interrogations. (The setting, more a matter of allusion than statement, is real; the characters are fictional.) Bill was a dutiful soldier and took the fall. The brass, including Dafoe's character, went free.

After all that, a highly routinized life spent at the poker and blackjack tables in one casino after another is life enough for this man. "I stick to modest goals," Bill tells La Linda, played by Tiffany Haddish. This equally sphinxy character wants Bill to join her stable of card players, staked by backers. There's the promise of rich rewards – and, as Bill notes, the threat of steep debts if the cards fall the wrong way.

The third major character in "The Card Counter" is the son of one of Bill's fellow Abu Ghraib interrogators, now dead. Tye Sheridan plays this opaque young man. All three actors, especially Isaac, keep every card close to the vest. The young man Bill calls "The Kid" seeks Bill's backing in a mission to kidnap, torture and execute the former private contractor played by Dafoe, who's now doing seminars in global security.

Over the decades, even as his budgets grew smaller, Schrader's fluidity as a director has grown, and it has, I think, even since "First Reformed." The slow fades harken back to both popular and "art" cinema of past generations, while simple fixed-camera shots, largely of faces, are interrupted just often enough by a moving camera in a casino establishing shot, for example. That visual confidence isn't always matched by the story elements. Bill taking The Kid under his wing feels like an idea not fully amplified, just as the maybe-romance between Bill and La Linda lacks a third dimension.

Schrader's more interested in a larger dimension of social context involving America's invasion of Iraq, and American belligerence in other forms. Among Bill's steady fellow gamblers on the pro circuit, there's a crafty braggart dressed perpetually in stars and stripes, and he's followed around by an entourage of two chanting "USA! USA!" whenever their boy rakes in another pile of chips.

Yellow-highlighter moments aside, the movie sticks to its guns and draws us in. Isaac has been praised for his minimalism here, just as Hawke was praised for containing his flourishes in "First Reformed." But it's really not a matter of an actor doing less. It's about doing more, quietly, sparingly, so the big moments register. Isaac has only a couple in "The Card Counter." But you notice them.

Where to watch: Out Friday in theaters

As the title character – a professional gambler with a lot behind him, and not much impulse to dredge it up – Oscar Isaac makes for a magnetic sphinx indeed. His is not the only good performance. But it's the crucial one.

The control of public information in Guam's public schools is concerning. Read more

Have a test-taking strategy for your next exam

All students have to take tests in school. In some classes, there may be only a few tests each semester while in others tests are given every … Read more