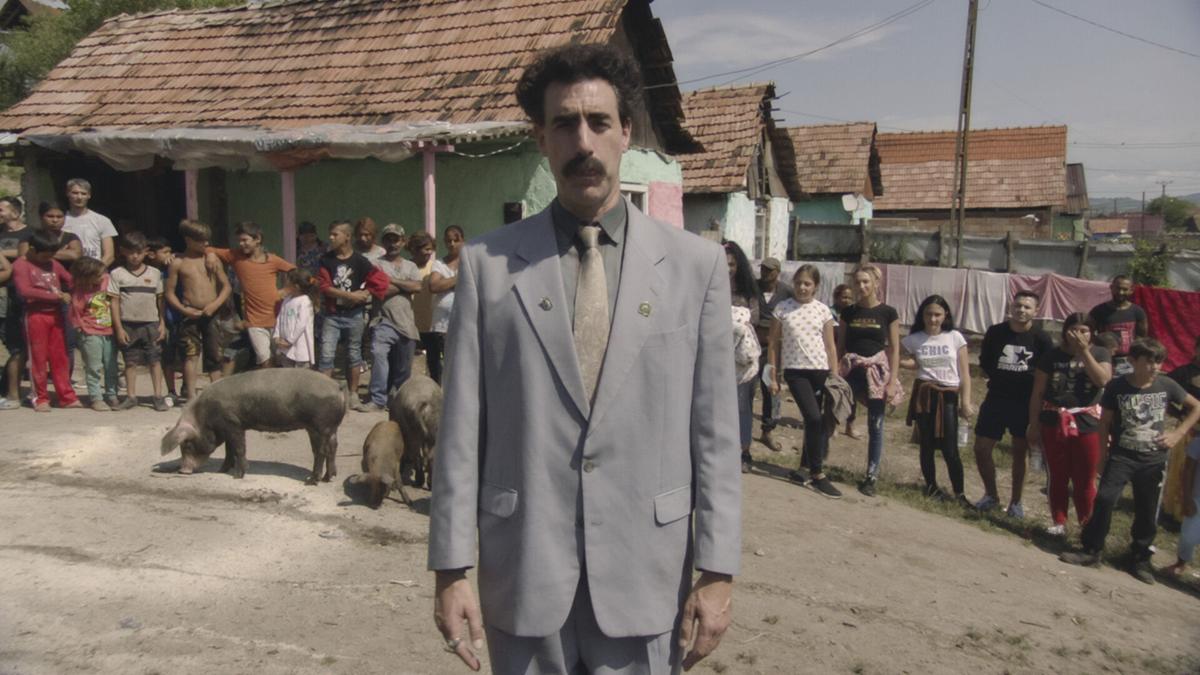 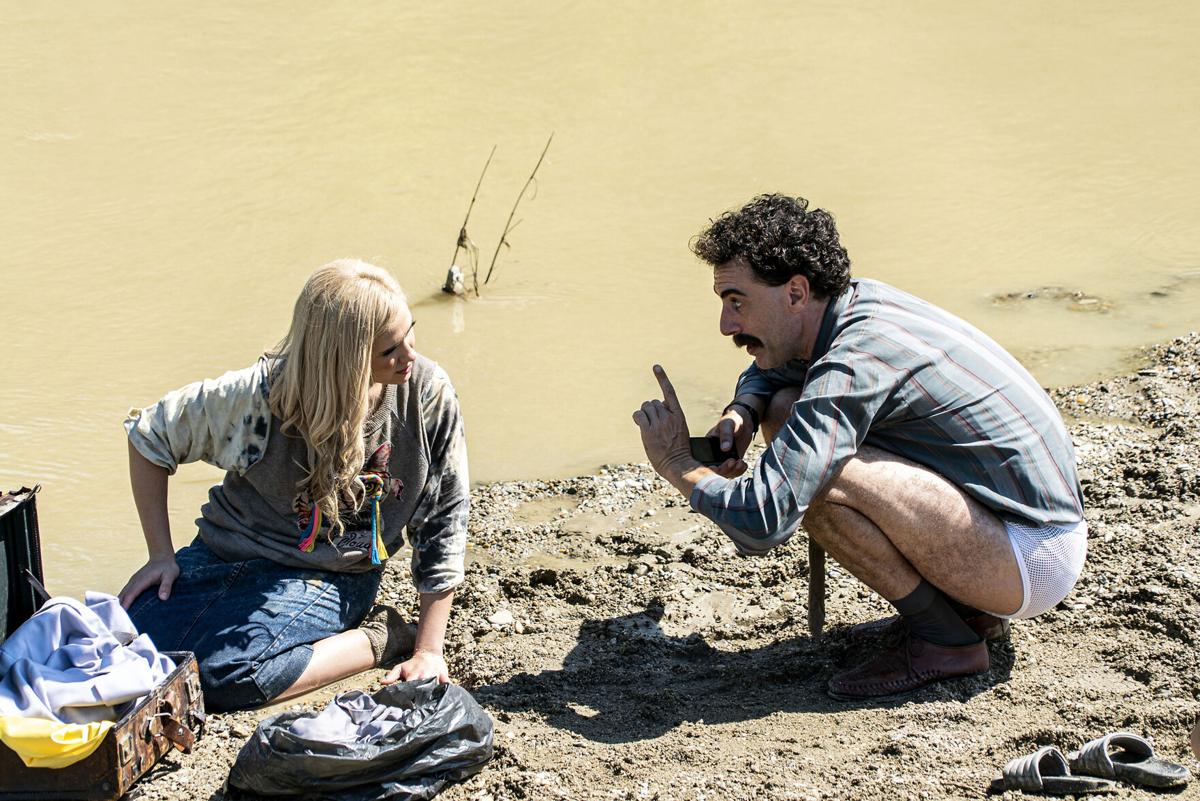 Earlier this year, Sacha Baron Cohen made some characteristically impish headlines when he crashed a right-wing "March for Our Rights" rally in Olympia, Washington. Posing as a country musician in a straw hat and overalls, he took to the stage and worked the crowd, getting many of them to sway and sing along to lyrics like "Obama / what you gonna do / Inject him with the Wuhan flu." The event's organizers, a militia group called the Washington State Three Percenters, eventually realized they were being punked, but the damage was done: The cameras were rolling and Baron Cohen, a past master at skewering the infinite varieties of American ugliness, had succeeded in shooting some especially rancid fish in a MAGA-branded barrel.

I remember reading about that incident back in June and experiencing the usual, dutiful surge of admiration for Baron Cohen's gutsiness, his near-superhuman refusal to break character under the most squirm-inducing circumstances. But my chuckle quickly gave way to a shrug – maybe because any stunt, no matter how outrageously conceived or brilliantly executed, pales beside the self-evident stupidity of a mask-free public gathering in the middle of a pandemic. Or maybe it was because Cohen's guerrilla-comedy tactics seem both overly familiar and woefully inadequate in these times, when reality – depressing, terrifying, deeply enraging reality – seems to trump satire at every turn.

In any event, the purpose of those Olympia shenanigans becomes clearer in "Borat Subsequent Moviefilm: Delivery of Prodigious Bribe to American Regime for Make Benefit Once Glorious Nation of Kazakhstan," the scattershot, fitfully funny and sometimes weirdly poignant second feature starring Baron Cohen's most recognizable persona. First introduced as a sideshow personality years ago on "Da Ali G Show," the hapless Kazakh journalist known as Borat Sagdiyev turned a simple roving-reporter bit ingeniously on its head. Wielding a stream of butchered English with scalpel-like precision, he solicited the friendly condescension of everyday Americans only to weaponize it, using his character's bumbling buffoonery sometimes to mortify them and sometimes to reflect their own bigotry back at them.

He did this to consistently brilliant, breath-sapping effect in the 2006 comedy "Borat: Cultural Learnings of America for Make Benefit Glorious Nation of Kazakhstan," which followed Borat as he made his way across the U.S., learning the ins and outs of American culture and uncovering everyday bastions of misogyny, anti-Semitism and Islamophobia. A taut, riotous mashup of the scripted and the unscripted, the political and the scatological, the movie, directed by Larry Charles, became an instant critical and commercial smash. It also robbed Borat of perhaps the key ingredient to his success: anonymity.

Part of the premise of "Borat Subsequent Moviefilm" – directed with the requisite visual cruddiness by Jason Woliner from a script patched together by a rather staggering eight screenwriters (including Baron Cohen) – is that Borat must compensate for his unexpected celebrity. That means doing penance for the eternal shame the first movie brought upon his home country, where he has spent several years doing hard labor. But now, Borat has been freed and sent back to America on an even more imbecilic assignment than before: to ingratiate the once-glorious nation of Kazakhstan with President Trump, taking advantage of the latter's well-known admiration for autocrats like Vladimir Putin and Kim Jong Un.

A gift for the US 'vice premier'

For reasons that are both difficult and pointless to summarize, Borat's specific mission is to present America's "vice premier," Mike Pence, with the gift of a highly cultured, sexually hyperactive monkey named Johnny. And so, once again sporting his trademark gray suit and effulgent pornstache, Borat makes his circuitous way back to America, where he must dodge fans and crowds using increasingly ridiculous disguises (perusing a shop, he even finds a Borat-styled " Stupid Foreign Reporter" costume). He must also familiarize himself with the latest in modern technology, discovering the wonders of internet pornography and, in an amusing recurring bit, befriending a print-shop owner who patiently faxes Borat's inane progress reports to Kazakhstan.

But Borat's plans go awry when he learns that his 15-year-old daughter, Tutar (the terrific Bulgarian actress Maria Bakalova), has stowed away in the monkey's crate. (She also effectively subs in for Borat's former sidekick, Azamat, played by the hilarious, sorely missed Ken Davitian.) Borat's logical conclusion – that Tutar will make an even better gift for Pence – allows the movie to launch a calculated attack on his patriarchal beliefs, namely that women should be kept in cages and that nothing is more dangerous than female pleasure. American sexism, curiously, gets a bit of a free pass here: Adrift in a country where women can at least freely drive cars and own businesses, Borat can't keep the sheltered but curious Tutar from breaking out of her own figurative cage, a journey that Bakalova invests with madcap energy and touching conviction.

Her liberation is encouraged by a woman, Jeanise, who emerges as one of the picture's stealth heroes, a voice of empowering sanity and wisdom in a toxic sea of Ku Klux Klan cosplay, QAnon conspiracy mongering, Holocaust denial and de rigueur groin-fixated humor. But she isn't the only sympathetic participant here, unwitting or otherwise. With a few exceptions – namely a boorish plastic surgeon who is successfully goaded into a display of casual racism – Borat's satirical jabs don't land with quite the same cringe-making force this time; the setups are too convoluted, the anonymous targets too genial, the payoffs too meager. A dance number at a Southern debutante ball provokes gasps but, aiming for the gross-out equivalent of the first film's full-frontal fisticuffs, falls somewhat short of the mark. Another scene, in which Borat and Tutar try to bamboozle an earnest antiabortion advocate, is predicated on such a tortured series of verbal misunderstandings that it winds up skewering itself.

It may be that this movie, like its uproarious predecessor, cries out to be seen in a crowded theater – rather than, say, a depopulated living room – for maximum impact. It may also be that Baron Cohen's usual "gotcha!" games feel superfluous, even ho-hum, at a moment when a white Republican senator thinks nothing of publicly mocking his colleague's Indian-origin name. (Or digitally enlarging his Jewish opponent's nose in a campaign ad, an act that makes Borat's own anti-Semitic dress-up seem positively enlightened.) As the past four years have made clear, plenty of ignorant Americans are more than happy to announce their bigotry without any prodding from Borat. The folks he actually spends time with here may elicit the odd spasm of pity by comparison, like the guys who kindly let him crash with them during COVID-19 quarantine, only to regale him with QAnon-backed theories about Democratic blood-harvesting cults. It's saddening, to be sure; it's also the opposite of shocking.

The coronavirus makes a late appearance in "Borat Subsequent Moviefilm," injecting a note of queasy-funny alarm into an overstuffed, strenuously up-to-the-minute plot that also finds time for drive-by nods to Dr. Anthony Fauci, Melania Trump, Jeffrey Epstein, Justin Trudeau and Pence. Although the vice president's brief appearance has already been widely advertised in the movie's trailer, the film's screener arrived with a request not to reveal some of Borat's other big targets. And if you wish to go into the movie knowing as little as possible, I do advise you to quit reading now (as you probably should have done earlier).

But if you don't care, well, neither do I. After all, the news that Rudy Giuliani called the cops in July in response to a Baron Cohen prank is already a matter of public knowledge. And much more from their shocking, climactic, what-the-hell-am-I-seeing encounter will become public knowledge as this movie makes its way through the culture, inspiring a fresh round of heated arguments and probably a few indignant lawsuits. Maybe that qualifies as a spoiler. But as Borat's latest misadventures exist to remind us, we live in a world gone mad, and compliance seems antithetical to his gleefully anarchic spirit.