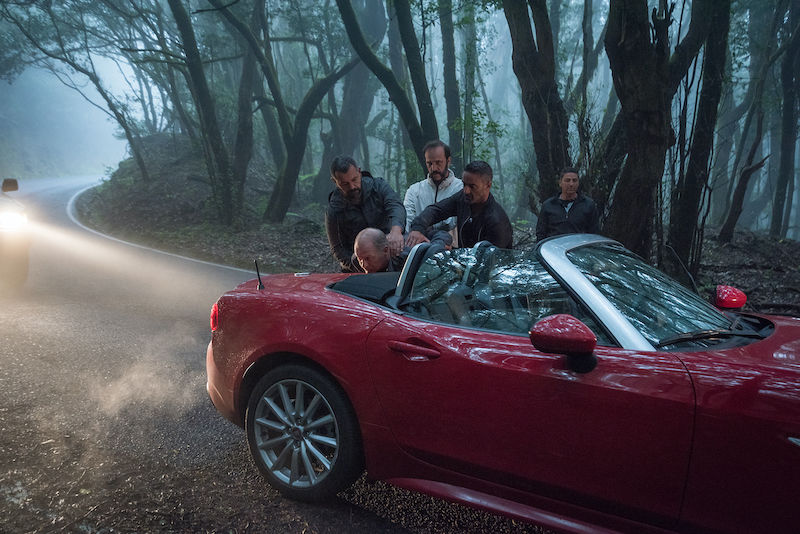 WATCH: A scene from "The Whistlers." Vlad Cioplea/Magnolia Pictures 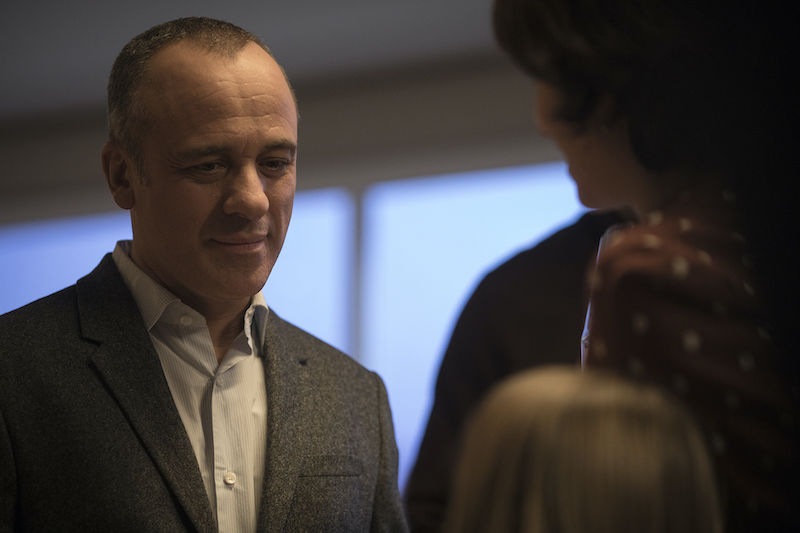 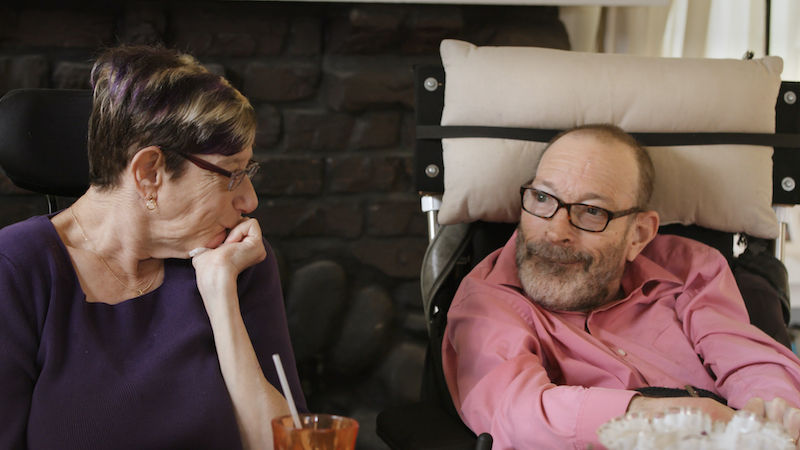 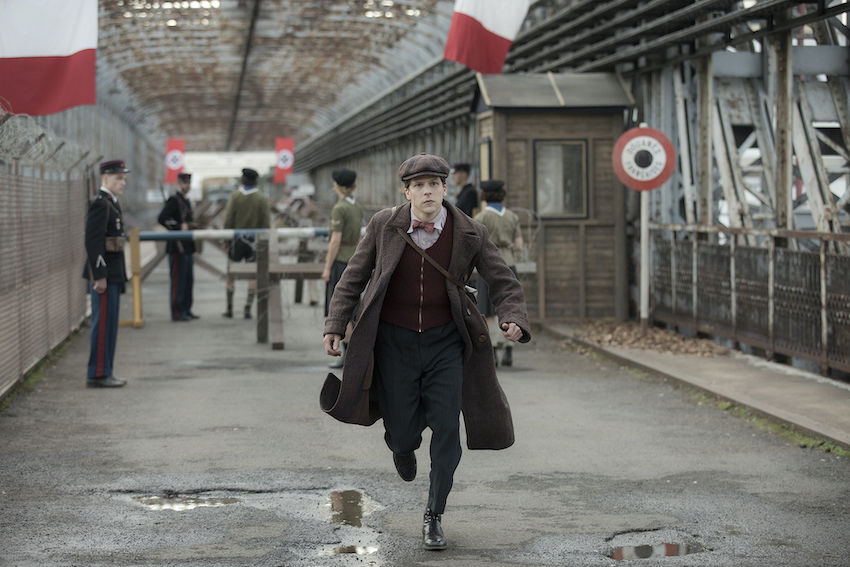 WATCH: A scene from "The Whistlers." Vlad Cioplea/Magnolia Pictures

As World War II thrillers go, "Resistance" has a secret weapon: Its hero is ... Marcel Marceau. You may be surprised to learn that the famous mime really did work for the French Resistance during the Nazi occupation, helping to transport hundreds of Jewish orphans out of the country - and, at least in the film, attacking a Nazi guard at one point in a particularly creative, if seemingly far-fetched, way. As played by Jesse Eisenberg, Marceau, the artistically inclined son of a Jewish butcher, makes for a somewhat twitchier presence than you may imagine the famously physically controlled Marceau to have been as a young man. (Eisenberg is also considerably older than his character, who was in his late teens and early 20s during the occupation.) But Eisenberg's signature intensity only heightens what is, in some respects, an otherwise by-the-book Holocaust drama, bringing to life a man whose art and rapport with children became instrumental in his underground activities. German actor Matthias Schweighöfer is particularly good and menacing in the role of the film's Nazi villain, Klaus Barbie, known as the Butcher of Lyon for his role, during the collaborationist Vichy regime, in torturing and murdering French Jews and members of the Resistance. R. Available via various streaming platforms and on demand. Contains scenes of violence. In English and some German with subtitles. 120 minutes.

The second film to come from Barack and Michelle Obama's Higher Ground Productions, "Crip Camp: A Disability Revolution" is a stirring, funny and informative documentary that opens in 1971 at Camp Jened, the upstate New York summer camp for disabled teens that lends the film its tongue-in-cheek title. Co-directed by Nicole Newnham and James Lebrecht (the latter of whom was a camper that summer), "Crip Camp" gradually evolves from a fond and moving reminiscence of an idyllic refuge of respect and acceptance - run by hippies, as Lebrecht tells us - to a fascinating history of the disability rights movement. (Recently discovered archival footage, shot by the People's Video Theater in 1971, brings the camp to vivid life.) In addition to Lebrecht, one of the other frequent voices in the film is that of Judith Heumann, another camp veteran who went on to found the advocacy group Disabled in Action, and who takes us, along with the film's other guides, up to the 1990 passage of the Americans With Disabilities Act. The film does an excellent job of tying the struggle to achieve disability rights to the parallel battles for gay (and other) rights. But it speaks loudest and most passionately simply by giving voice to an often silenced community. R. Available via Netflix. Contains some strong language, including sexual and drug references. Contains some subtitles. 116 minutes.

In 2016, Brazilian filmmaker Kleber Mendonça Filho made one of the year's best films: "Aquarius," starring Sônia Braga at her most regally sublime. Braga is on hand in Mendonça's new film, "Bacurau," albeit in slightly different form. In this strange, often confounding tale of a tiny Brazilian village trying to save its own life, Braga plays the town's grim, determined, slightly wild-eyed doctor, named Domingas, who is as handy with her booze flask as with profanity-laced speeches. In a futuristic tale reminiscent of "Children of Men" and, more recently, the misbegotten satire "The Hunt," "Bacurau" doesn't give filmgoers many clues as to what is going on in a town that feels simultaneously cursed, haunted and endowed with supernatural powers by way of a mysterious psychotropic pill. When things finally become clear, they do so amid clouds of bullets and blood; as with "Aquarius," Mendonça is concerned with such issues as history, identity and sense of place - but here, he couches his themes in generic grindhouse violence. Convoluted and sometimes willfully opaque, "Bacurau" nonetheless marks an intriguing entry on the CV of a filmmaker who nearly always surprises. Unrated. Available via cinemaartstheatre.com and afisilver.afi.com. Contains obscenity, nudity, sexuality and graphic violence. In English and Portuguese with subtitles. 131 minutes.

In "Uncorked," Mamoudou Athie plays Elijah, whose life dream is to become a sommelier, despite his father's wishes that he go into the family barbecue business. So far, so predictable: As a melodrama of father-son separation (and, just maybe, reconciliation), this earnest but often bland and choppy take on the form is as generic as they come. But thanks to a terrific cast - including Athie as well as Courtney B. Vance and Niecy Nash, who play Elijah's parents - "Uncorked" sparks to life with moments of heartfelt emotion and wryly observant home truths. Nash's and Vance's performances are particularly gratifying, as they make a long-term couple's intimacy as palpable in gentle put-downs as in loving gestures. For his part, Athie is a paragon of wary filial reserve. Written and directed by Prentice Penny, "Uncorked" bears whiffs of such predecessors as "Sideways" and "The Paper Chase," with undernotes of "East of Eden" in familial psychodynamics. But if Penny's plot points are derivative, he manages to infuse them with specificity and meaning - especially by way of Memphis, where the movie was filmed, and whose music, food and history suffuse the enterprise, including a blink-and-you-miss-it glimpse of the Lorraine Motel and a delectable scene filmed at C C Blues Club. Even at its most familiar and stodgily paced, "Uncorked" possesses a terroir all its own. Rated TV-MA. Available via Netflix. Contains coarse language and brief sexuality. 104 minutes.

In "The Occupant," a prosperous advertising executive named Javier, living in a gorgeous Barcelona apartment with his wife and son, has fallen on hard times. As the movie opens, Javier (Javier Gutiérrez) is visiting various agencies trying to find work, to no avail; as a middle-aged man on the downslope of his once-major career, he's the victim of both ageism and inflated self-importance. Forced to move out of his home, he embarks on a bizarre journey of revenge, fueled by grief and an overwhelming sense of entitlement. Written and directed by brothers David and Àlex Pastor, "The Occupant" touches on the same themes of class envy and dispossession as "Parasite"; if this film is more conventional and less surprising, it benefits from clean lines, stylish visual design and an engrossing central performance by Gutiérrez, who has the compact, pent-up energy of Anthony Hopkins at his most quietly volatile. TV-MA. Available via Netflix. Contains sexual references and brief violence. In Spanish with subtitles. 103 minutes.

"Fantastic Fungi" is already a cult hit: Louie Schwartzberg's documentary about mushrooms became hugely popular during a limited theatrical run earlier this spring; its rerelease for digital viewing during the coronavirus quarantine couldn't be better timed. With equal measures of efficiency and passion, Schwartzberg examines the history, culture, science and incredible healing properties of the mycelium, the microscopic network that has supported and created life for hundreds of millions of years, and just might hold the key to cognition itself. Chronicling the groundbreaking work of mycologist Paul Stamets, with exquisite time-lapse cinematography and arresting graphics, "Fantastic Fungi" makes a persuasive case for mushrooms, not only as nature's cure-all (or closest thing), but as portals to spiritual enlightenment. What might have been mind-blowing just a few months ago now feels urgently of the moment. Unrated. Available via theavalon.org and afisilver.afi.com. Contains nothing objectionable. 81 minutes.

- The Cold War thriller "Balloon" tells the true story of a group of East Germans who attempt to escape to the West in a homemade hot-air balloon. Unrated. Available via theavalon.org. In German with subtitles. 125 minutes.

- Set in Newcastle, England, filmmaker Ken Loach's drama "Sorry We Missed You" follows the struggles of a working-class family in the new gig economy. Unrated. Available via cinemaartstheatre.com. 101 minutes.

- A corrupt cop becomes entangled with mobsters - and a femme fatale - in a plot to spring a man from a Bucharest prison in Romanian director Corneliu Porumboiu's twisty thriller "The Whistlers." Unrated. Available via afisilver.afi.com. Contains violence and explicit sexual material. In Romanian, English and Spanish with subtitles. 97 minutes.