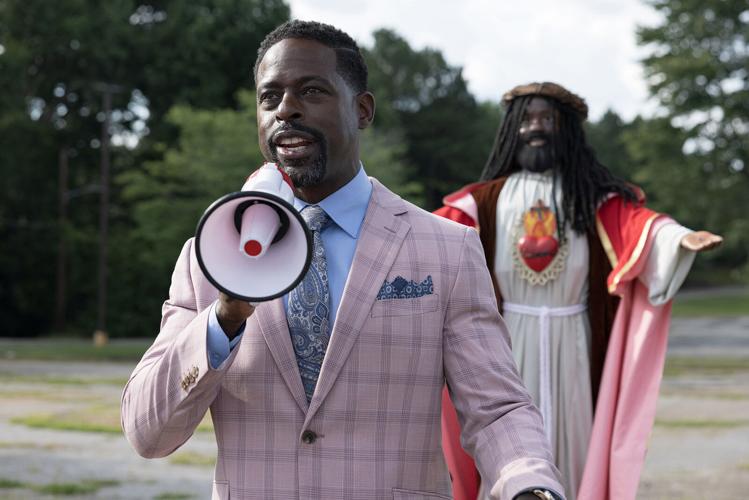 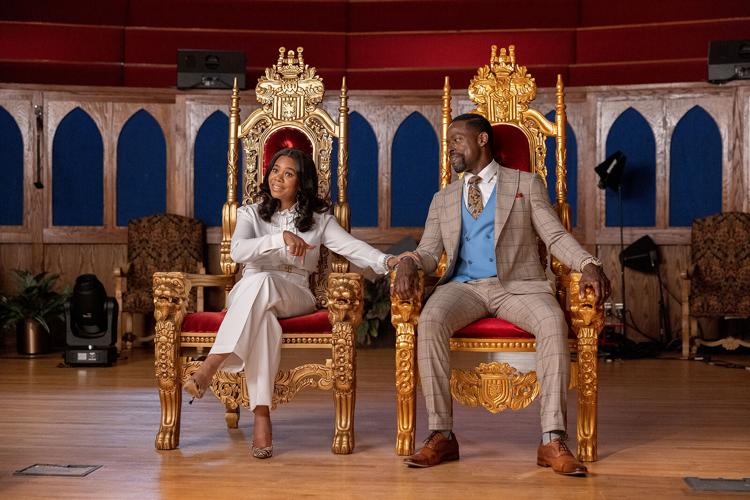 ATLANTA — Sterling K. Brown is best known for his dramatic turn for six seasons as earnest Randall Pearson on "This is Us."

So it's a revelation to watch him play Pastor Lee-Curtis Childs in the new Atlanta-based film "Honk for Jesus. Save Your Soul," which comes out Friday on the Peacock streaming service and in movie theaters. Brown gets to strut his stuff as a man who has embraced the prosperity gospel, a philosophy where financial blessing and physical well-being are considered the will of God.

He dances around in Prada suits, punches the air like Ali and swims in a fancy pool with his wife and first lady Trinitie Childs, played by comedy vet Regina Hall.

"When people think of me, they want to cry," said Brown during an interview with The Atlanta Journal-Constitution at the Four Seasons in Midtown last weekend. "Being able to do something else is fun. I thought this was the perfect project coming off 'This is Us.'"

The film, written and directed by by twin sisters and Atlanta natives Adamma and Adanne Ebo, focuses on how the couple attempt to dig themselves out of a scandal-driven hole following allegations that Pastor Childs had relationships with several young men. If this sounds a lot like the Eddie Long scandal at megachurch New Birth Missionary Baptist Church in Lithonia from 2010, it is no coincidence.

"The film stems from us growing up in Atlanta and being Southern Baptist and going to church during the height of the megachurchs in the 2000s," said Adamma Ebo, 31. "They were everywhere."

And while they appreciated the communities megachurches fostered, the prosperity gospel rubbed them the wrong way.

"There were certain hypocrisies," Adamma said. "Appearance is important. They work out. They wear designer clothes. Those were aspects we didn't like."

"It is not evidence of divine alignment," added Hall.

The film is structured around the couple's comeback effort, which includes a documentary film crew following them around as they prep to reopen. Their attempts at humility are tone deaf. They show off their closet full of fancy threads. They sit on gold-plated thrones.

Naturally, a rival pastor couple is perfectly happy to steal away their constituents.

There are also scenes focused on the "loyalists" who stick with the scandal-ridden couple through thick and thin. "They're based on an amalgamation of folks I grew up with," Adanne said. "Nothing their faith leader could do is wrong."

While the characters Brown and Hall play are comedic to a degree, the actors capture various degrees of pathos and pain. Childs has used his charisma to get what he wants and hasn't quite processed that this doesn't always work. His wife, in the meantime, internally struggles with his betrayal while trying to put on a brave face to the public.

Adamma said Hall was a woman who could pull off Trinitie's role with humanity and humor. "We needed someone who could say so much without saying anything," she said, and

Hall said she not only liked the script but she also did the film to support the twin sisters who put the movie together, which was based on Adamma's thesis short she shot while getting her degree at UCLA.

"I thought it was smart and clever to use the mockumentary style to address these church issues," Hall said. "And I loved the twins. They were so intimately linked in vision and had such a clear point of view."

At the same time, the mockumentary set up creates all sorts of awkward moments. "They don't know what to do in front of the cameras," Hall said. "They're public figures but not actors."

Casting Brown came after Adanne saw him do a comedic spin as a murderous dentist on the sitcom "Brooklyn Nine-Nine" and realized his acting range.

Fortunately, Brown was on board quickly: "As somebody who grew up in church, I thought this was an interesting way to attack it. Also, being a big fan of Regina, it was all kismet."

Brown leaps into his role with vigor and a bit of improv.

In one scene, his character shows supreme confidence in his next move while in the pool. To punctuate that, he bites Trinitie's foot with delight, affection and a crazy glint in his eye.

"We were cool and comfortable," Brown said. "She had her foot in the water sanitized by chlorine. So I went for it."

"I loved it," Adamma said. "It solidified them as a couple in a real interesting way that wasn't on the page. It shows why they've been together all this time."