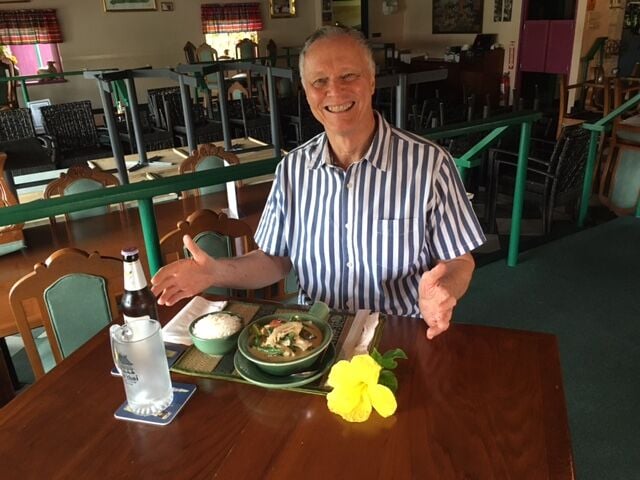 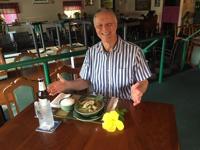 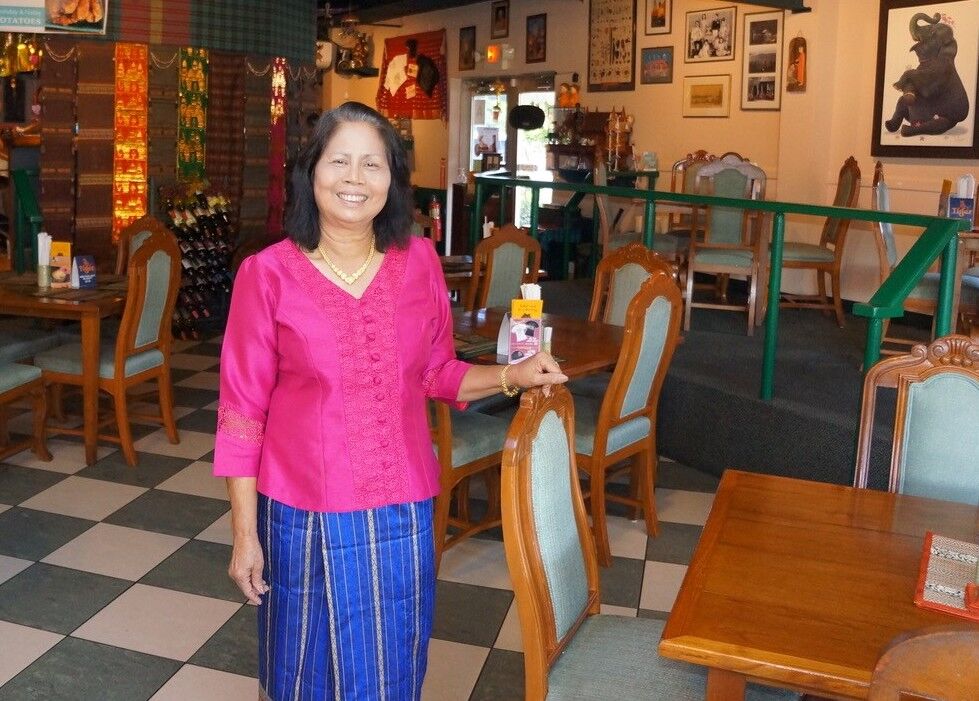 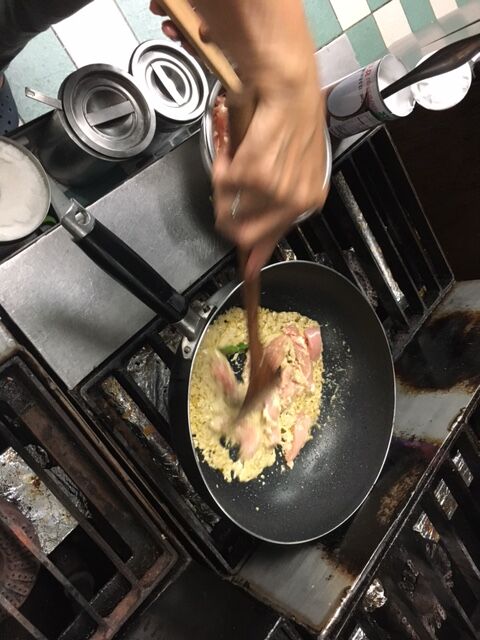 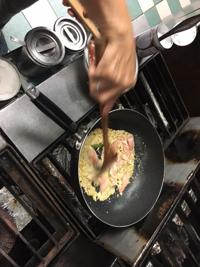 GETTING STARTED: It's important to follow the cooking recipe instructions for the Thai green chicken curry dish as shared by Waen "Lek" Trombetta, of Ban Thai Restaurant & Lounge. The dish starts by heating oil in a heavy skillet over medium heat then adding the curry paste. Contributed photo. 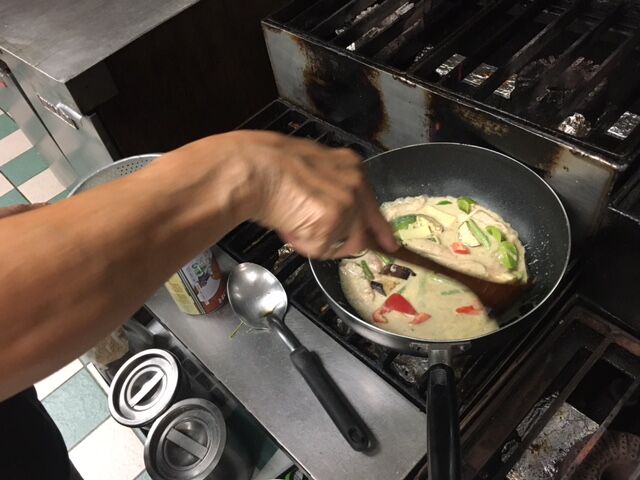 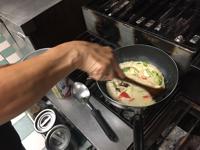 STIRRING IT UP: Waen "Lek" Trombetta, of Ban Thai Restaurant & Lounge, demonstrates how she cooks one of her restaurant favorites, Thai green chicken curry. Contributed photo. 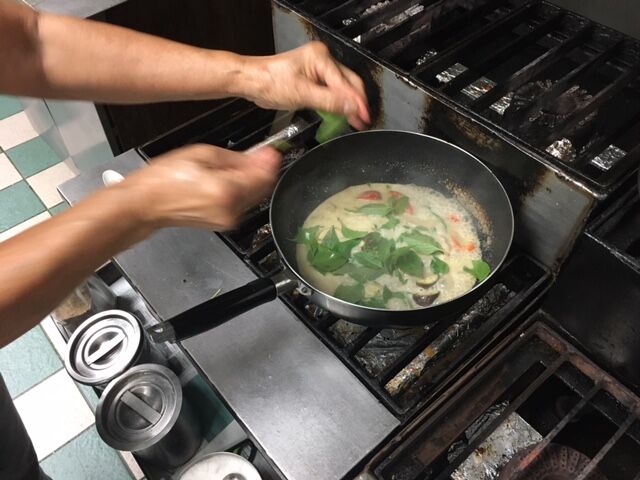 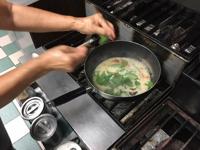 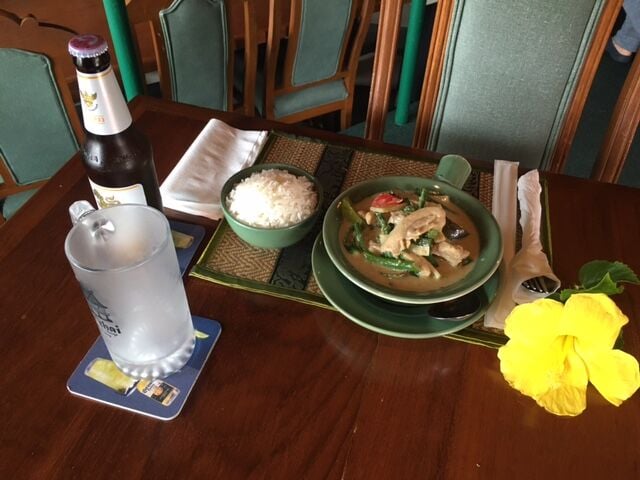 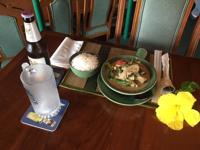 GETTING STARTED: It's important to follow the cooking recipe instructions for the Thai green chicken curry dish as shared by Waen "Lek" Trombetta, of Ban Thai Restaurant & Lounge. The dish starts by heating oil in a heavy skillet over medium heat then adding the curry paste. Contributed photo.

STIRRING IT UP: Waen "Lek" Trombetta, of Ban Thai Restaurant & Lounge, demonstrates how she cooks one of her restaurant favorites, Thai green chicken curry. Contributed photo.

There are those who say we live in paradise. From my perspective, I think we eat in paradise!

Few places in the United States, and perhaps the world, has such a rich diversity of cuisine as does Guam. Obviously, this is because Guam is the home to many diverse cultures, each of which has its own treasure of exotic recipes. Simply flicking through the yellow pages of a Guam phone book gives you an idea of the vast assortment of ethnic cuisine awaiting your taste buds. These include American, Brazilian, CHamoru, Chinese, Filipino, German, Indian, Italian, Jamaican, Japanese, Korean, Mexican, Thai, Vietnamese, among many others.

One of the greatest pleasures I derive from writing this column is getting to meet and to talk to other people who love to cook and who inspire me to try new recipes. One such person is Waen "Lek" Trombetta, founder and proprietor of Ban Thai Restaurant & Lounge, located at 971 Pale San Vitores Road in Tumon.

I first met Lek decades ago when she was an employee at Marianas Trench restaurant. That experience convinced her that she wanted to own and run her own restaurant. As a result, on April 19, 2000, nudged by her life partner, Gregg Kosanke, Lek opened Ban Thai. This was a match made in heaven. Lek has an unsurpassed passion for cooking and Gregg, who is challenged with making a peanut butter and jelly sandwich, is a skilled businessman and marketer. From the beginning, Lek concentrated on cooking food that customers love, and Greg took care of the business aspects of running the restaurant. The rest is gastronomic history!

In an earlier column, I mentioned that Lek had given me a Thai kaffir tree, the leaves of which are an essential ingredient in many Thai dishes. At that time, I asked Lek if she could share a Thai recipe with me that my readers might enjoy. Knowing that my family often eats at Ban Thai, she asked if I had a favorite recipe. Without any hesitation I replied “green chicken curry!”

A few weeks later, Gregg called and invited me to come to the restaurant on a Tuesday, the one day a week that the restaurant is closed. He told me that Lek wanted to give me a personal cooking lesson on how to make Thai green chicken curry.

To say the least, I was thrilled! This would be my first time in a restaurant kitchen!

On Tuesday, March 9, Lek greeted me at Ban Thai and ushered me into the kitchen. Over the next hour and a half, I was treated to a culinary concert. With a flair that reminded me of a music director wielding a baton to synchronize all the musicians, Lek effortlessly wielded knives, spoons, and spatulas to bring the assortment of ingredients together into a culinary masterpiece! Like a true chef, Lek doesn’t need to measure the ingredients. Instead, she has the experience and natural ability to bring perfection to a dish without a single technical measuring device.

Of course, without accurate measurements, I was left to translate Lek’s culinary concert into a recipe that I can share with you readers. If this fails in any way, blame only me!

It might be best if you taste the real deal at Ban Thai (649-2437) before you try this recipe. That way you’ll know how it’s supposed to taste and you can adjust the ingredients as needed.  Trust me, when you serve this dish to your friends and family, just like the curry, they’ll be “green” with envy of your cooking skills!

3 oz. (1/2 cup) of eggplants with skin sliced into rounds or slight diagonals

1. Heat oil in heavy based skillet, or pot or wok over medium high heat

3. Add 3/4 cup of coconut milk and kaffir leaves and simmer.

4. After coconut separates, add chicken, lower heat to medium, and cook for about 7 minutes

6. Add the eggplant, bamboo shoots, green and red peppers and green beans or snow peas. Bring to a boil for 3 to 4 minutes. (Taste and adjust spicing to taste)

Note: I adapted this recipe from watching Lek and reviewing the website “recipetineats.com”

*** Lek recommends Chaokoh coconut milk because is very creamy. You can also find in at American Grocery.