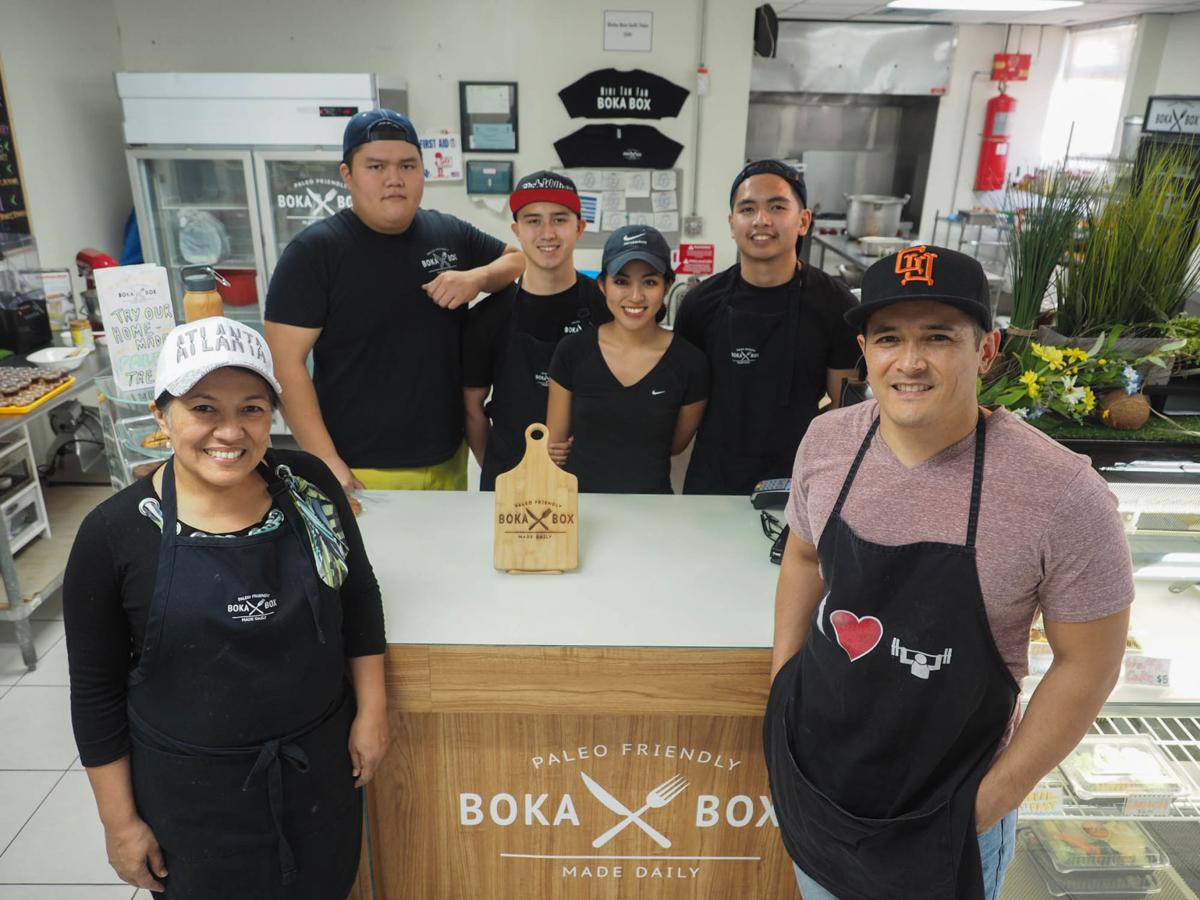 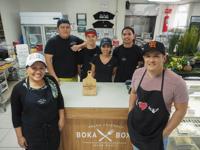 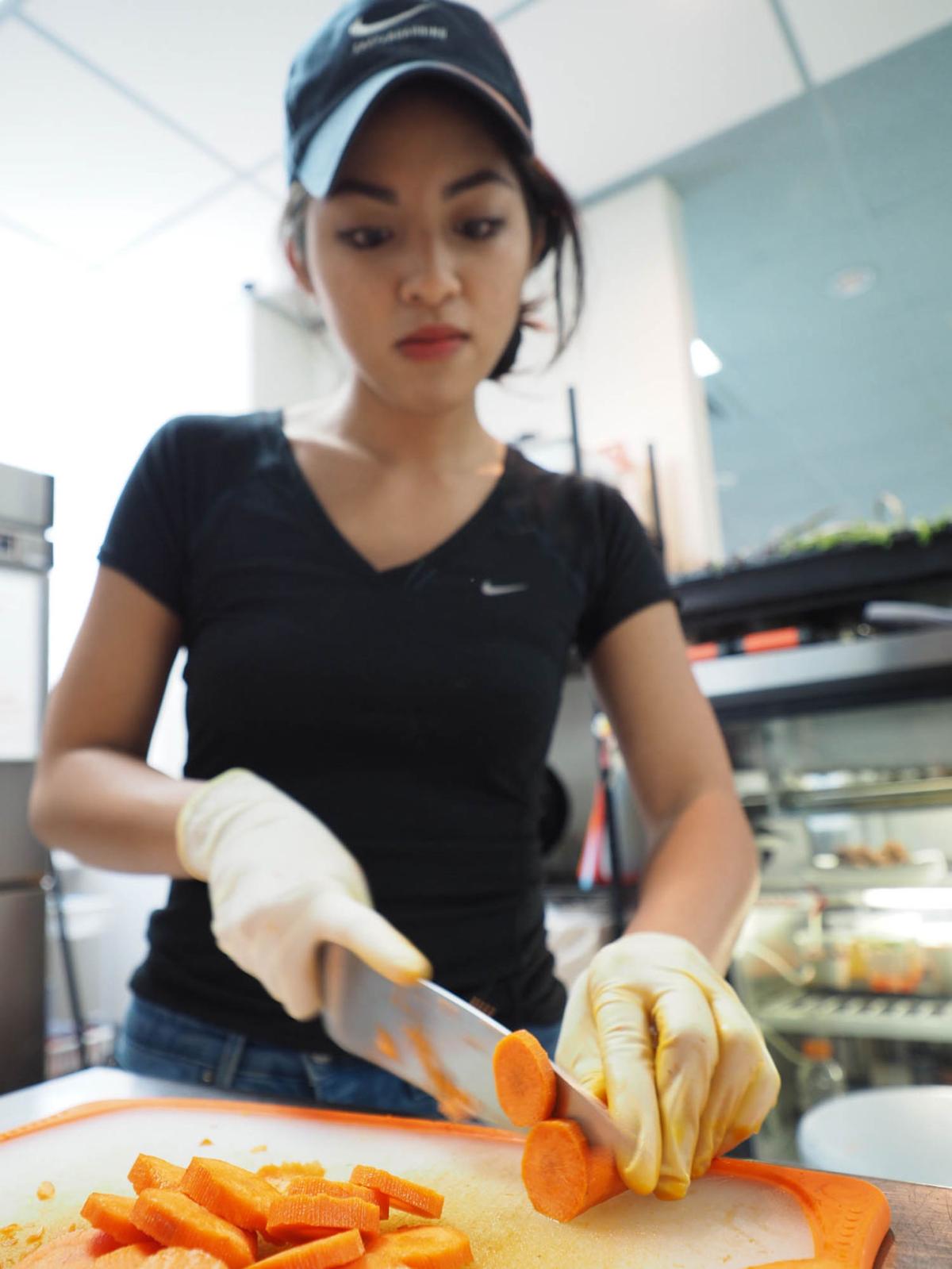 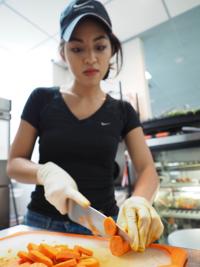 CARROTS ON POINT: Cabrini Cruz slices carrots at the Boka Box on Wednesday, May 10. David Castro/ The Guam Daily Post 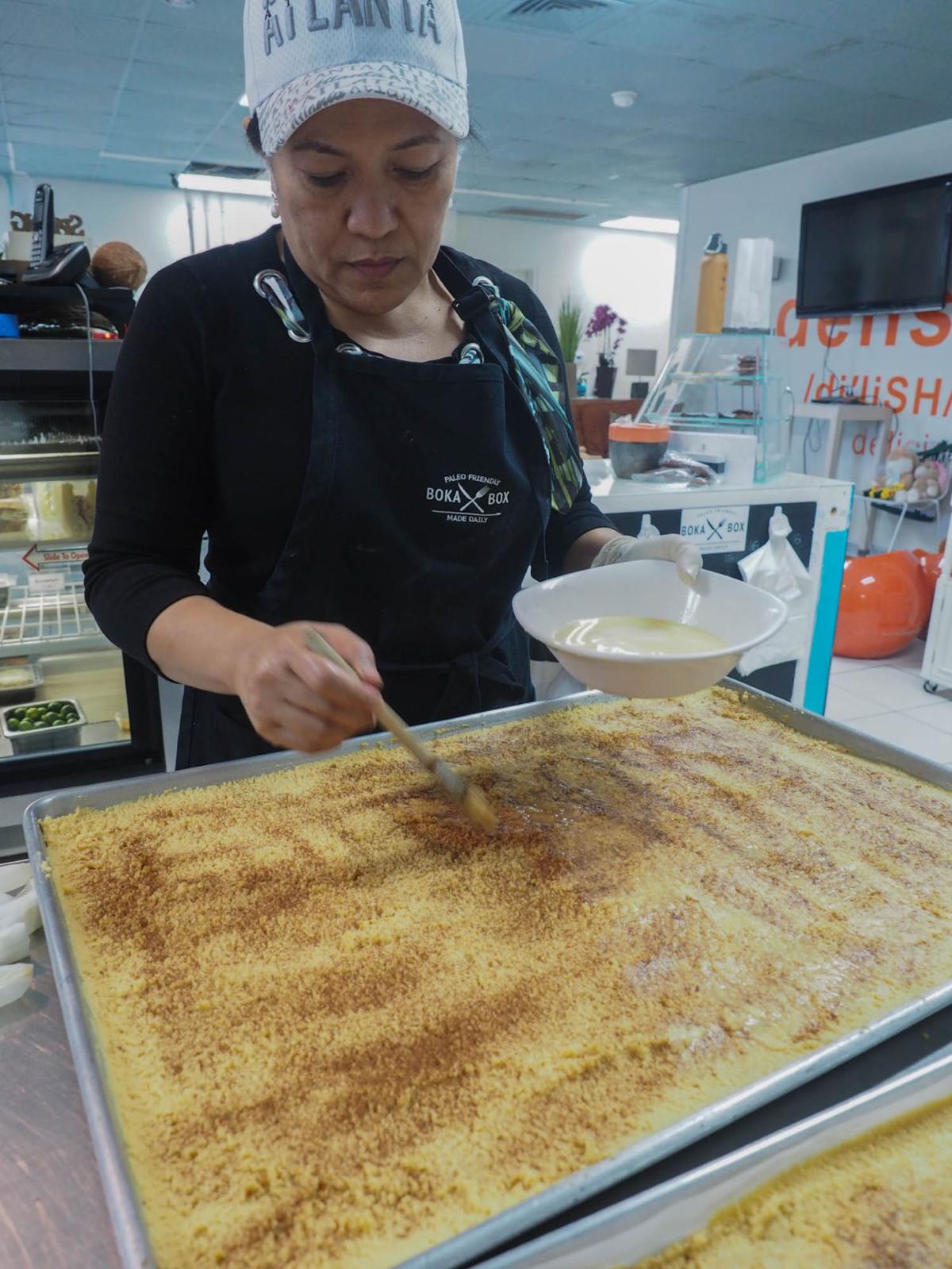 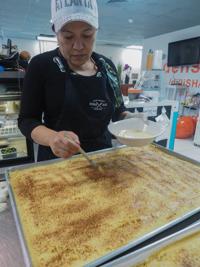 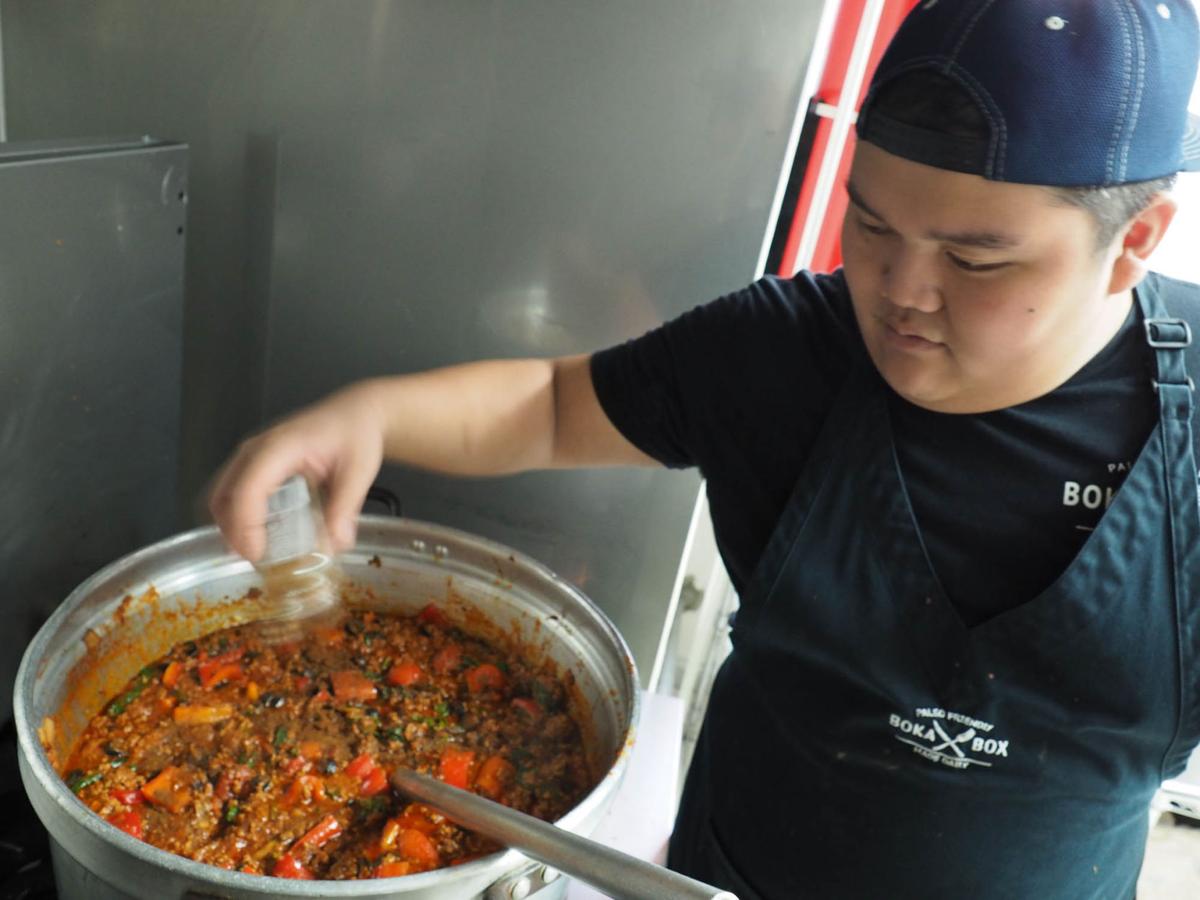 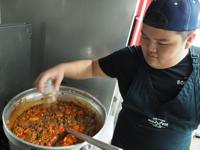 THE RIGHT INGREDIENTS: Lennie Ofeciar adds spices to a big pot of Paleo Chili at the Boka Box on Wednesday, May 10. David Castro/The Guam Daily Post 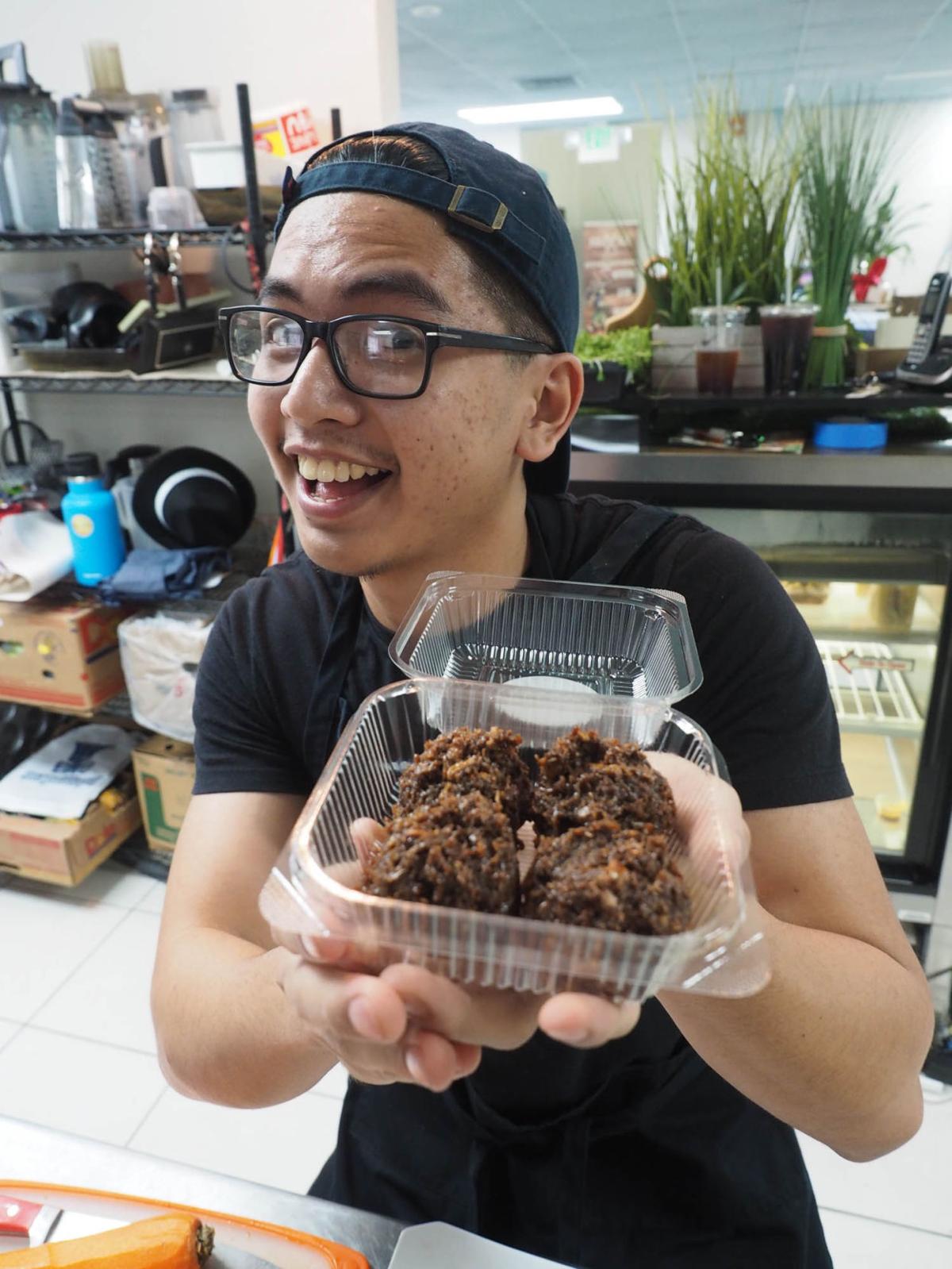 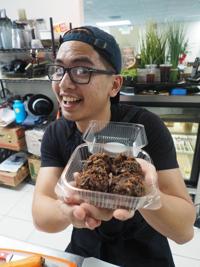 CARROTS ON POINT: Cabrini Cruz slices carrots at the Boka Box on Wednesday, May 10. David Castro/ The Guam Daily Post

THE RIGHT INGREDIENTS: Lennie Ofeciar adds spices to a big pot of Paleo Chili at the Boka Box on Wednesday, May 10. David Castro/The Guam Daily Post

It’s a common scene to walk up to a fiesta table lined with the usual local delicacies that make island residents’ mouths water. You take a scoop of rice, and then pile your plate with a little bit of everything down the line and probably a few more servings of your favorite.

That’s the routine, and it goes without much question, that you may ponder the "healthiness" of your mountainous fiesta plate. That's when you’re awakened.

Jesse Rosario, owner of Boka Box, agreed that it’s a familiar, yet zombie-like mentality that island residents have when it comes to scooping up their fiesta table favorites. While it’s not all bad, some of it is, he said.

Rosario started Boka Box nearly a year ago with the inspiration that he could offer the island a different lifestyle and a healthier eating mentality.

The product of that idea is what is now known as Boka Box, the island’s first nutritionally sound meal preparation service offering Paleo-based meal plans that help customers establish a solid nutrition foundation.

"I’ve always wanted to do something that made a difference on the island and I spent years thinking about how I could help people," Rosario said. "I wanted people to have a good, healthy foundation and something they could make their own.  That’s what the Boka Box is."

The Paleolithic diet is not another diet fad, or healthy trend, Rosario said, but an open door to a healthier lifestyle based on conscious eating habits and a new mentality doesn’t have to sacrifice your favorite fiesta table item.

A Paleo diet is essentially based off what the average caveman would eat, largely consisting off natural, unprocessed fruits, vegetables, meats, seafood and nuts. This way, the body lessens its intake of fatty chemicals and increases its balance of nutrients.

"You take a look at evolution and how man has evolved to where we are now, there’s a big boom in health issues between the cavemen and us," Rosario said. "They were very active and only ate what they could hunt and grow, nothing was processed, and it was very simple."

Spending nearly a decade improving nutritional services in Guam schools, Rosario said he always tried to get his family to eat better as well, encouraging them to choose better eating habits and a healthier lifestyle.

When the Lenten season came about in 2015, Rosario said he proffered a Paleo diet he had been tinkering with as something new for his family members to try, which they accepted as their 40-day challenge.

With his mom, sisters and several other family members embarking on their Paleo journey, Rosario said their results were inspiring and that’s when he decided it could also be something new for Guam.

"I had an uncle who was taken off diabetic medication because he started eating better, everyone’s energy levels went up, they lost weight and all of their end results were just due to eating clean, they weren’t on a diet and they weren’t restrictive," Rosario said. "At that point I was like ‘This is it, this is what we’re going to do.’ I wanted to share their benefits, my benefits, with Guam."

Without many choices for quick and convenient health foods on island, Rosario said he wanted to take care of the bigger block to people eating healthy by providing the meals for them.

Using as many locally grown ingredients as possible, Boka Box prepares three different meals a day along with two snacks, for meal subscribers or customers who want to pop in for a meal any time during the day.

According to Rosario, you’re never going to get the same thing more than twice a month. Paleo creations dazzle customers daily with a large variety of tasty options found in no other diet.

For dinner, some entrees include meatloaf with mashed potatoes, salmon patties with seasoned potatoes and local salad, barbecue ribs with haggun suni and potato salad, and quinoa loco moco with salad.

At Boka Box, it’s clear to see meal preparation doesn’t have to be monotonous or lacking in taste.

New lifestyles for the better

"It’s a simple approach, you don’t have to be restrictive with what you’re eating and I don’t want people to get bored either," Rosario said. "It’s a little more work for us, but we make food enjoyable and that’s how food should be. It shouldn’t be something people are afraid to eat or something they’re not experimenting with."

Aside from their creative lineups, Boka Box also takes care to transform all of their meals to fit Paleo standards. Whether it’s substituting rice with roasted vegetables or making brownies out of tapioca, coconut and dark chocolate, mixing up healthy food ingredients keeps their menu exciting and fresh.

While most subscribers take on the Paleo diet for a month or two, the true goal is to set a foundation for a healthy lifestyle, Rosario said. Eating as our hunter-gatherer ancestors did ages ago still provides for a healthy, sustainable life today.

"When you start to change the foods that you are eating, getting off processed foods, food with high preservatives and chemicals, you’re body really starts to heal itself," Rosario said. "There’s the Paleo diet in general, but you always have to figure out how this lifestyle works for you. That’s the change that I’m looking for."

NOTE: The establishment's operating hours and location listed in the print version of this article in The Guam Daily Post is inaccurate. Refer to the information here for the correct time and place. We apologize for any inconvenience.