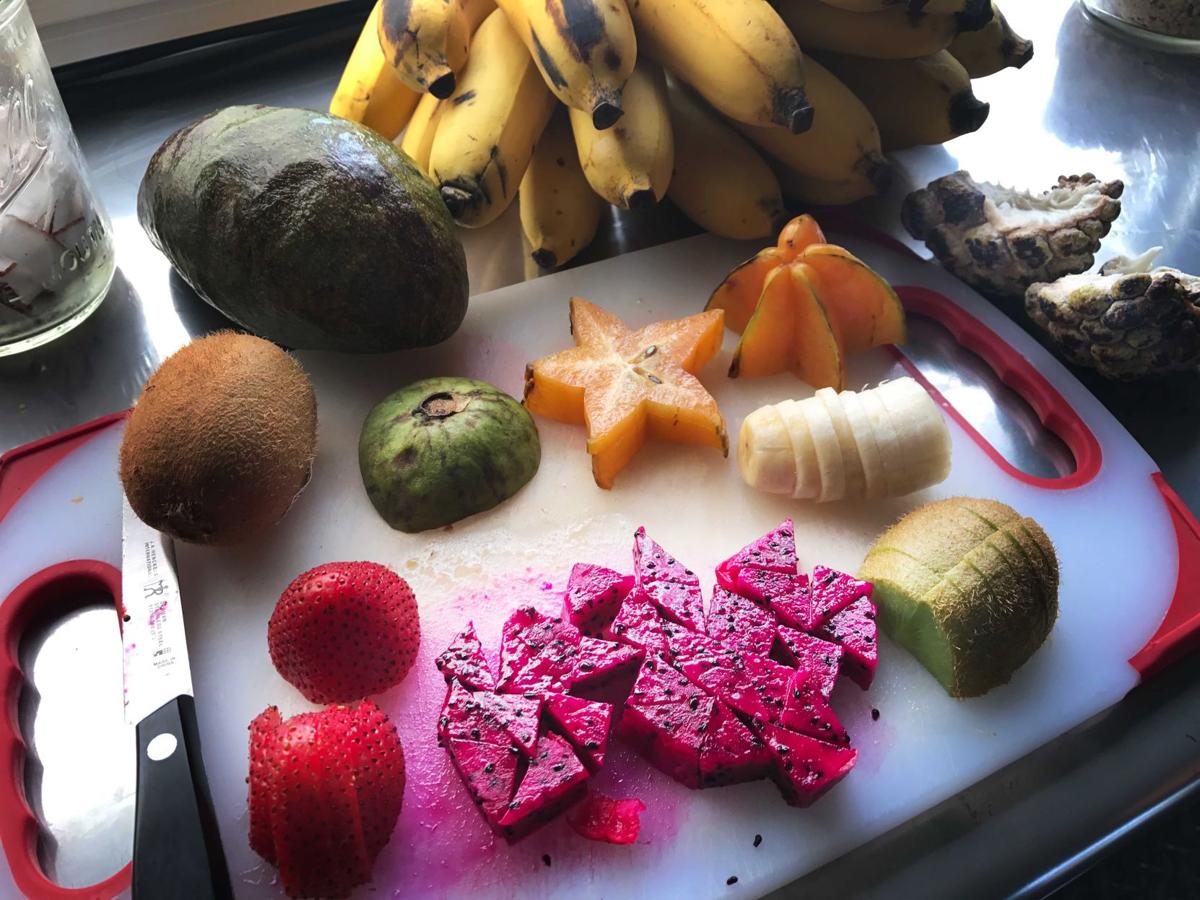 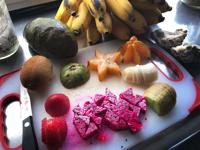 FROM FARM TO PLATE: The toppings are Z's Green Canteen are fresh and subject to availability by season. Norman M. Taruc/The Guam Daily Post 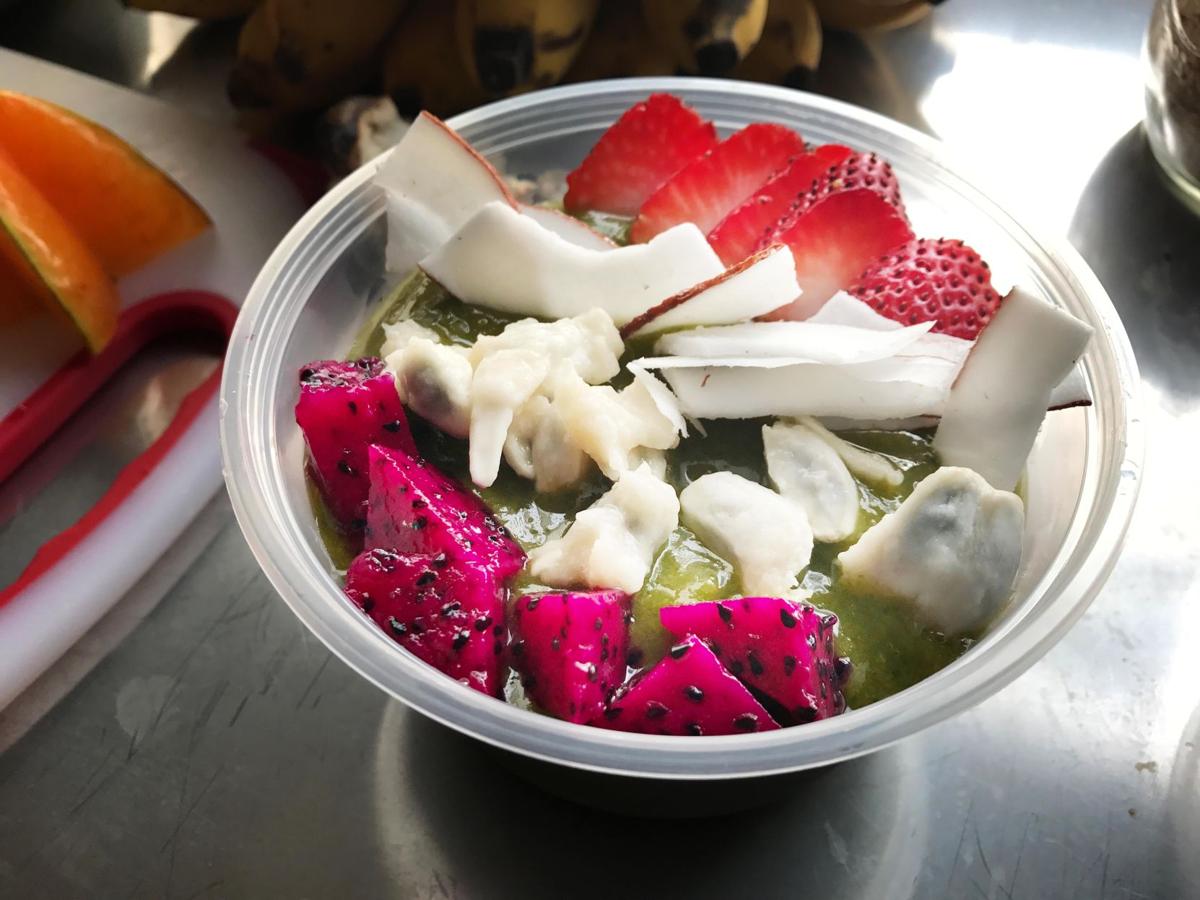 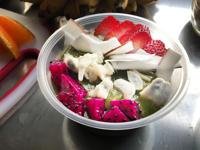 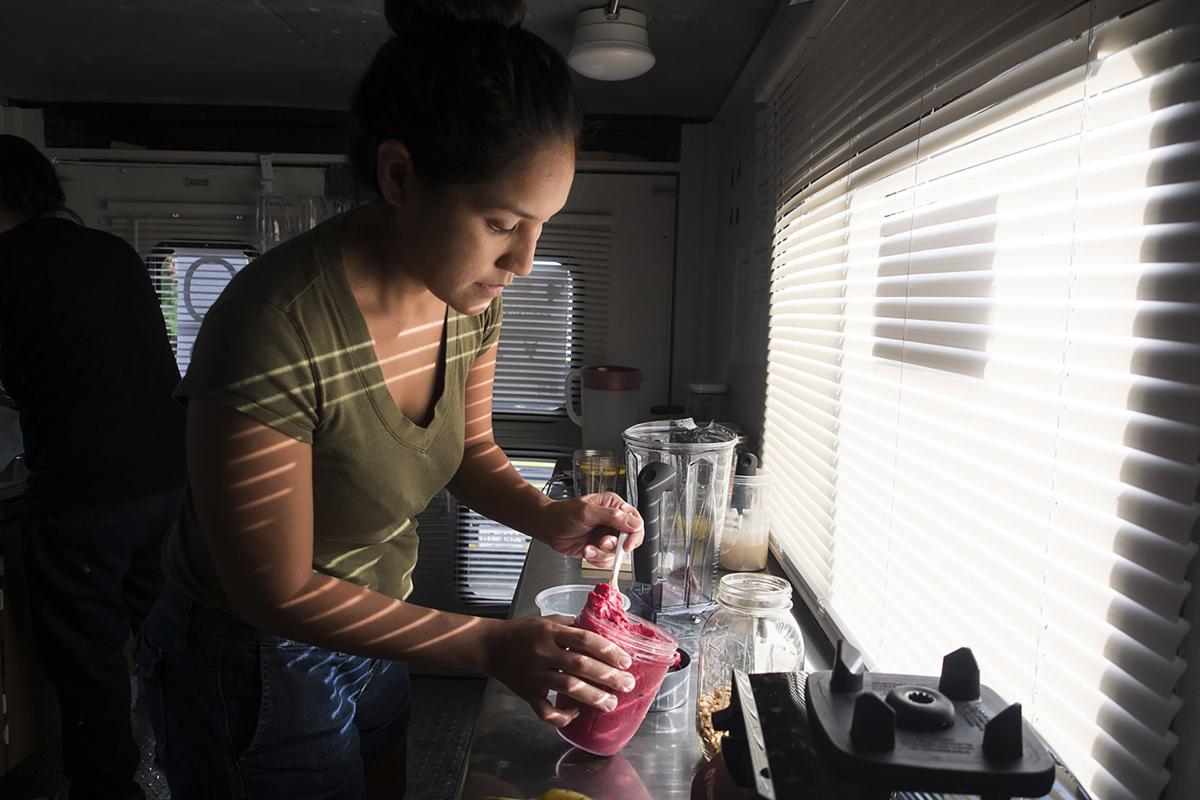 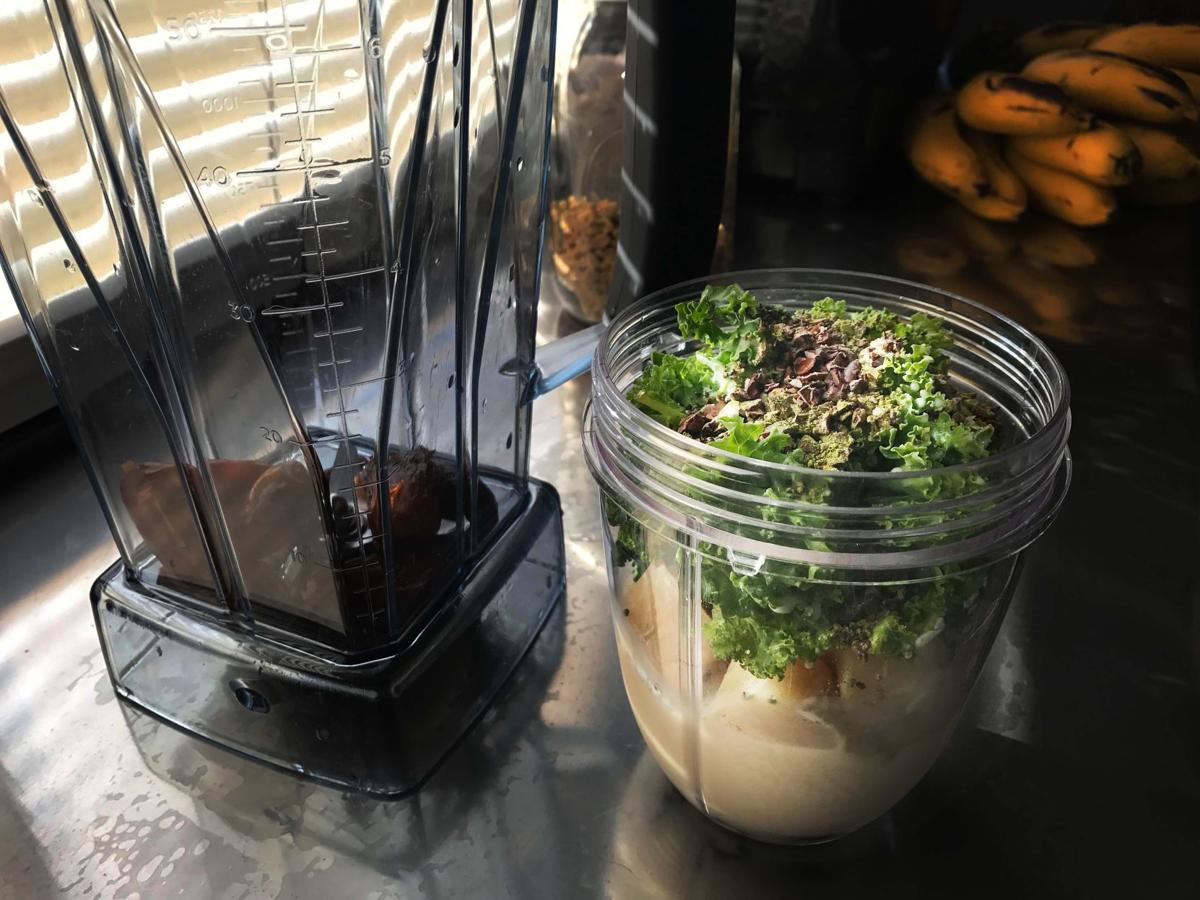 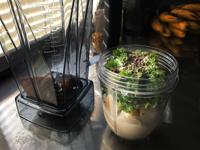 EVERY VITAMIN FROM A  TO Z: A green smoothie prior to being blended at Z's Green Canteen in Dededo. Norman M. Taruc/The Guam Daily Post 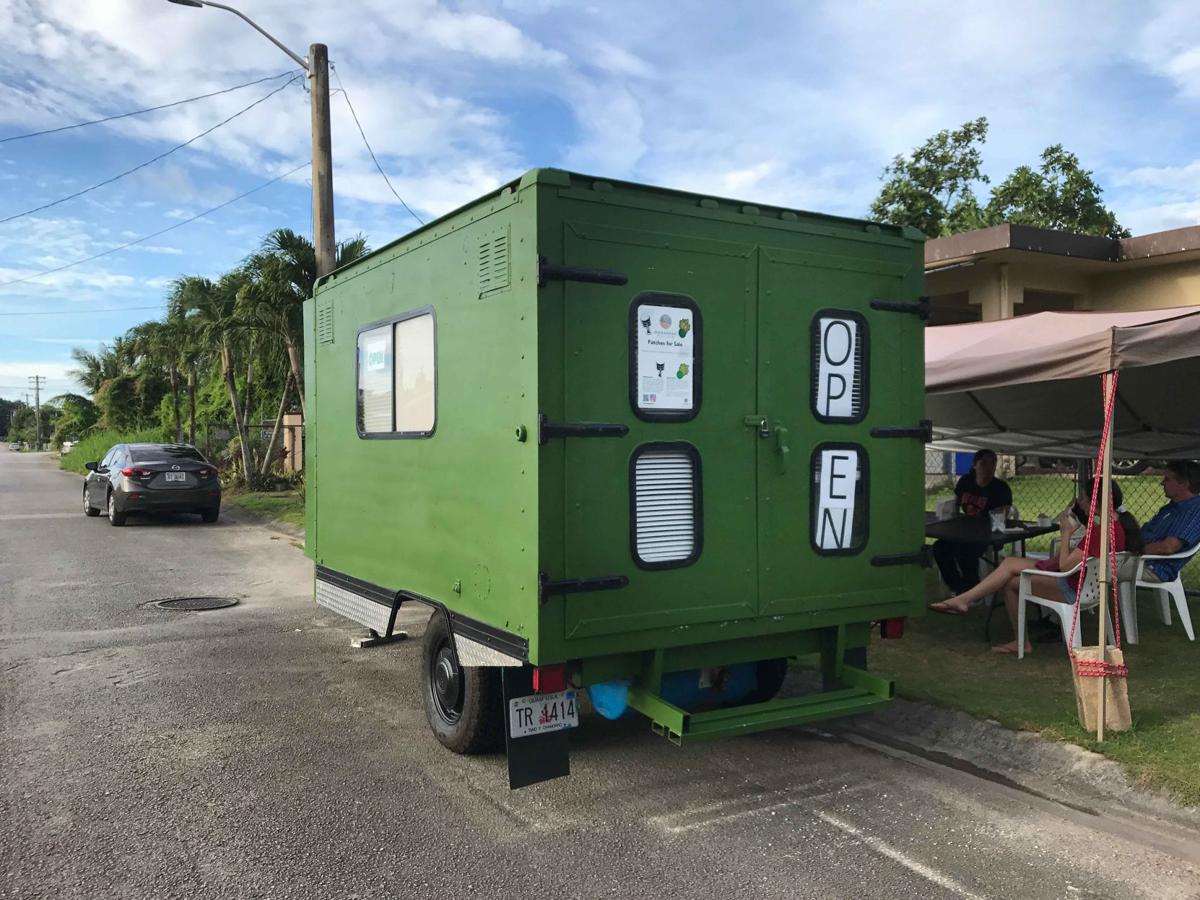 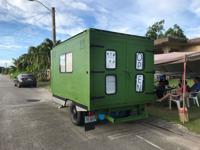 FROM FARM TO PLATE: The toppings are Z's Green Canteen are fresh and subject to availability by season. Norman M. Taruc/The Guam Daily Post

EVERY VITAMIN FROM A  TO Z: A green smoothie prior to being blended at Z's Green Canteen in Dededo. Norman M. Taruc/The Guam Daily Post

By a random roadside residence behind the Mega Drug pharmacy in Dededo, islanders will be delighted to find a small green container on wheels, packed with local greens good for your body and lots of love, too.

Joining a revitalized health-wise movement on island is Z’s Green Canteen, another healthy, all natural option for Guam’s growing population, particularly those interested in an icy treat for a hot summer’s days ... which is every day on Guam.

Owners Nikki Roberto and Tonnie Guzman decided to leave local restaurants they had worked at for more than a decade in order to start their own small business.

Z’s Green Canteen – named for Guzman’s daughter, Zaia – became a reality last year and officially opened up for business just about a month ago on June 17.

With the help of Guzman’s parents, the two business partners were able to find and purchase a used mobile container a day before Thanksgiving last year.

Although they had a an idea of what was to come, a lot of hard work would need to be put into the run-down container for their dreams to fully materialize.

Guzman’s father, Ben, spent the next seven months putting in whatever hours he could on any given week to repair and refurbish the container as a labor of love.

While it was difficult to consistently put work in – Z’s Green Container went through a full overhaul as far as expanding interior space, plumbing, electrical lines and painting – it was finally ready to hit the road in June.

“We didn’t know what to expect, but we thought that if we could take on the biggest challenge of opening, everything else would be easier,” Roberto said. “We understand the risks and what it takes, but opening a business can be done! If you start with something modest, you never know where it’s going to take you so long as you keep that integrity, that vision.”

Since then, it’s been about contributing to a healthier Guam and supporting local farmers. Everything Z’s Green Canteen has to offer is completely natural and homegrown.

“The integrity of our product relies very heavily on local produce, local fruits and vegetables,” Roberto said. “We made a commitment from the beginning, that the best route to take was using the simplest of ingredients from our beautiful island of Guam.”

In line with Guzman’s healthy-eating lifestyle, the two partners thought they could contribute a better option for others, too.

Even though the canteen’s menu is geared toward those living a strict diet, there are smoothies and ice creams not only perfect for vegans or diabetics, but just about anyone looking to satisfy their sweet cravings.

“Who doesn’t like a nice refreshing smoothie?” Guzman said.

With a super simplified menu, customers can try four different smoothie bowls and four handcrafted ice creams, all with their own tastes and benefits.

The two partners made it a point to ensure all bowls are healthy, making them with only fresh fruits and vegetables, and no sugar, artificial sweeteners, juice concentrates or dairy products.

Wholly organic and good for all

As for ice cream, flavors like cookies and coconut, chocolate and coffee will also tantalize your taste buds! All of the canteen’s ice creams are also made with no eggs or dairy products, making it a great supplemental treat for the lactose-intolerant.

What might seem like the odd flavor out of the bunch, avocado, joined the menu thanks to the support of a couple of supportive families who donated their locally grown avocados to the canteen, who got creative with the gift.

"What makes their products sweet?" has probably popped into your head by now. Guzman and Roberto use organic coconut sugar or “date paste” as natural sweeteners in their ingredients. “Date paste” is made from the date fruit, which they puree into a paste for their items (also an added source of fiber).

At Z’s Green Canteen, what you see is definitely what you get! There’s no container of artificial powder being poured into any blenders and there’s no hidden sugars or additives you haven’t been told about, Roberto assured.

“You could probably eat a gallon of this stuff – which I don’t recommend – but you probably could and still feel good about it!” Roberto said. “It’s all really refreshing, light and good for you. You don’t have to feel so guilty about it.”

In addition to being quite healthy – if you haven’t noticed by now – this mean green machine on wheels is one of the many proud small businesses founded by supporting local.

Here, you have a couple of local girls supporting local farmers and essentially, the local community. That’s always been part of the plan, Roberto said.

Inspired by her mentor – the late business owner and family man, Chris Bejado – Roberto said she learned everything she knows about the restaurant business from Bejado, most especially about being a part of the community and giving back to the island in a positive way.

“The holy trinity of what we have to offer is something that’s good for you as a customer, good for us as a small business and good for the community in committing to buying local,” she said.

Guzman and Roberto have made it a mission of theirs to support local by purchasing most of their ingredients from local farmers.

Whether it’s by walking down the street to a standalone fruit or vegetable stand or waking up early on the weekends to catch farmers at the co-op, this canteen makes it a point to support local and provide the freshest of ingredients to its customers.

For now, it looks like Z’s Green Canteen is off to a good start with the backing of local farmers and an island that is moving in a healthier direction, thanks to small business owners with big dreams like Roberto and Guzman.

“It’s been amazing – the people coming out to us and farmers sharing their crops with us – but it’s more a matter of giving before receiving, that’s where we’re at right now,” Roberto said. “We want to keep the canteen nice and simple, to manage the integrity of the ingredients and the products.”

What: Healthy smoothie bowls and ice creams that support local

Where: Behind the Mega Drug pharmacy in Dededo (orange two-story building) from Monday to Thursday, moves to the street behind the Guam Museum (near Proa restaurant) on Fridays