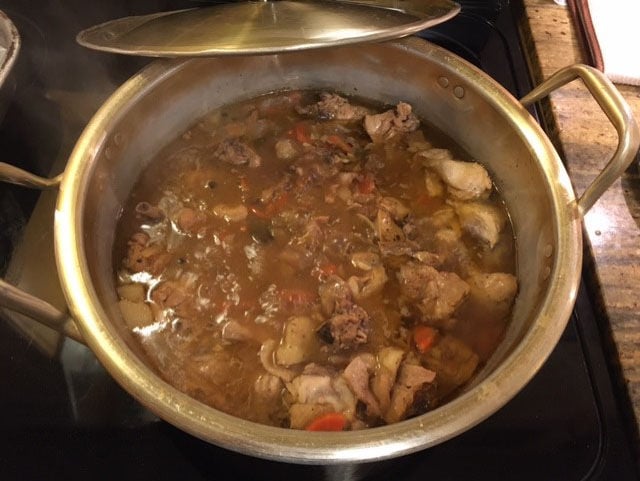 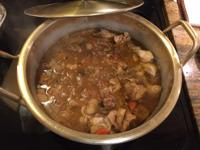 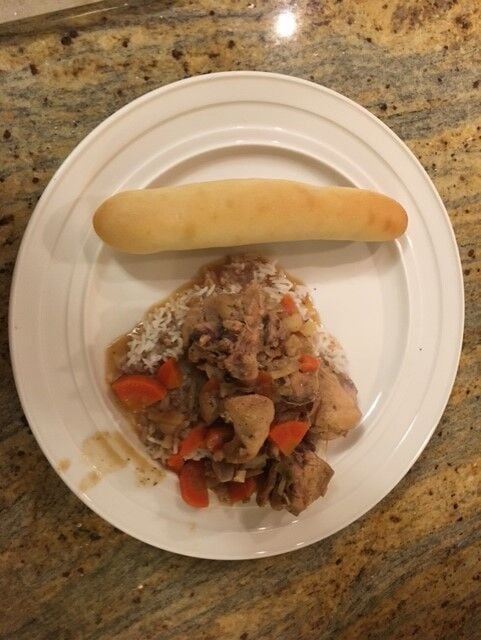 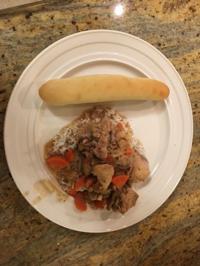 COME EAT: A serving of adobo with a homemade breadstick. Bill Pesch/For The Guam Daily Post 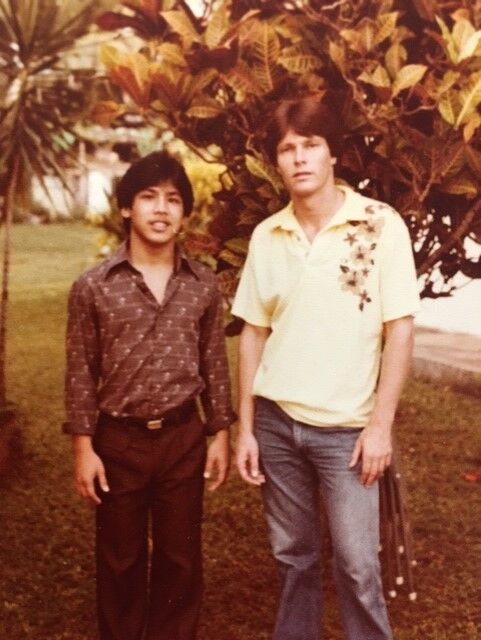 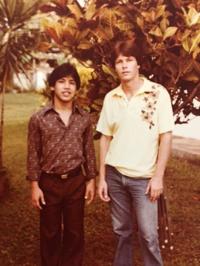 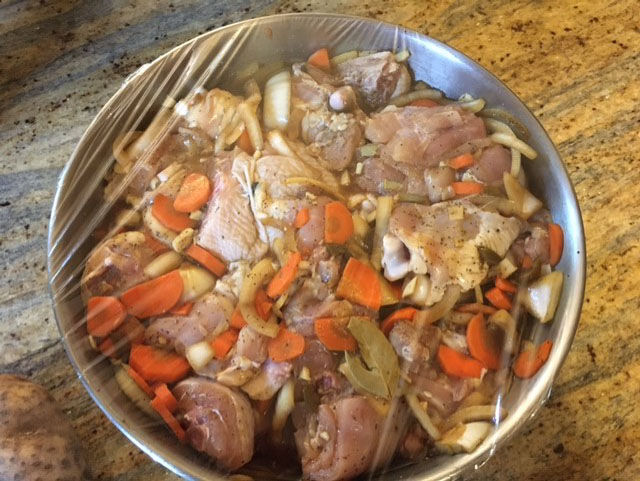 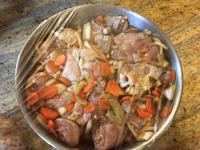 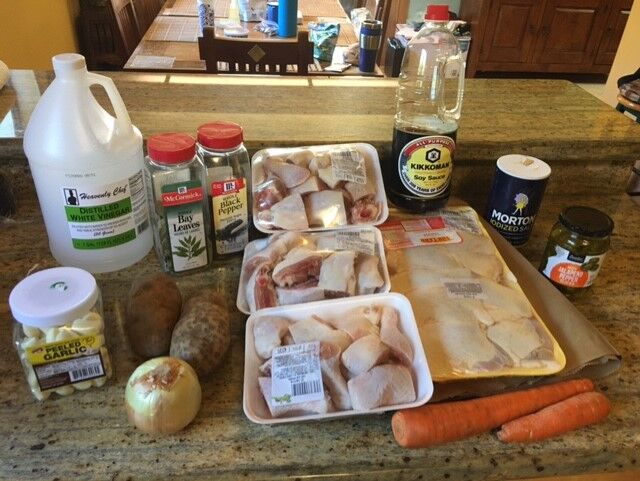 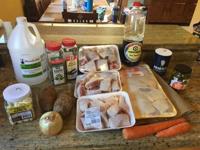 INGREDIENTS: The ingredients for the adobo. Bill Pesch/For The Guam Daily Post 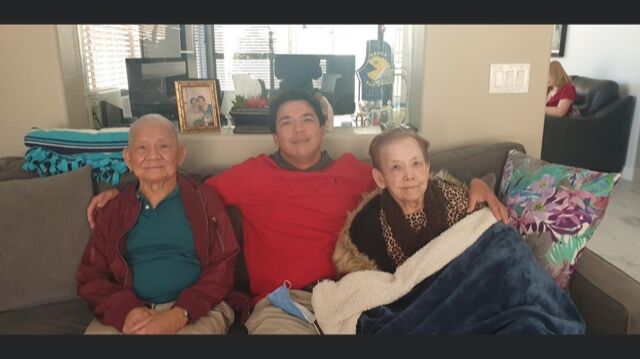 PAMILYA: A recent photo of Danny and Nicky Payumo along with Danny Jr. Contributed photo

COME EAT: A serving of adobo with a homemade breadstick. Bill Pesch/For The Guam Daily Post

INGREDIENTS: The ingredients for the adobo. Bill Pesch/For The Guam Daily Post

PAMILYA: A recent photo of Danny and Nicky Payumo along with Danny Jr. Contributed photo

Every New Year is a time to reflect on the past and to be grateful for our many blessings. As I think back over my nearly 45 years on Guam, I am especially thankful that soon after I arrived I became close to a family that introduced me not only to the rich cultures of the island, but also to the vast assortment of delectable island and Asian cuisines. That family was the Payumo family from Dededo. Leo Payumo, who you may now know as the Sports Guy for PNC news, or as a radio DJ, was a student of mine during the 1976-77 school year at John F. Kennedy High School. It was my first year of teaching and my first experience of venturing away from the U.S. mainland.

I first met Leo's family when he invited me to a party at his relatives' house in Inarajan. I learned that Leo's dad, Danny Payumo, was Filipino, while his mother, formerly Nicolasa (Nicky) Delgado, was CHamoru. I also met Leo's nine brothers and sisters that night. I was blown away by the number of people who attended the party, and by the astounding quantity and assortment of food! I had never seen anything like it back in the mainland.

One of my favorite dishes that I sampled that night was chicken adobo. I happened to mention to Leo how tasty I found the dish. Several weeks later when he invited me to his home, Nicky offered to teach me how to make it. I immediately took her up on the offer. I found the combination of vinegar, soy sauce and jalapeño peppers, among the other ingredients, a real taste treat. From that night onward, chicken adobo became a standard dish in my own home.

Fast forward a couple years. I decided during my third year of teaching that I wanted to go to law school. I chose to attend American University in Washington, D.C., because my parents lived close by in northern Virginia. I would live with them to keep the cost down. Leo was scheduled to graduate from JFK in June 1979. As a graduation present, I offered to take him to the mainland for the summer since I was returning to go back to school. He jumped at the opportunity.

A few weeks after his graduation, Leo and I were preparing to depart Guam. Nicky was worried that he would have a tough time adjusting to stateside food without rice, so she gave me a large coffee can filled with Calrose rice to take back to my parents' house. Soon after we arrived, Leo and I prepared dinner for my parents. That night we served them chicken adobo, along with the Calrose rice.

Before I came to Guam, I only knew Minute Rice. Whenever my mother made a recipe with rice, which wasn't that often, she always used Minute Rice. With Minute Rice, all you have to do is to add boiling water, stir, and in a minute the rice is ready to eat!

To this day, I can still remember my parents' expression when they tasted the adobo with the Calrose rice. I think they were both a bit skeptical at first, but as they swallowed that first bite, they both smiled, looked up at us and said together, "This is delicious!" They couldn't believe how good "real" rice tasted. A short time later, my father threw out the Minute Rice and bought a rice cooker and a 10-pound bag of Calrose rice! Leo and I taught my mother how to make adobo. My parents entertained frequently, and chicken adobo became their favorite "exotic" main dish for many of their formal dinners.

So it is with extreme gratitude that I devote this first column of 2021 to the Payumo family, especially to Danny and Nicky, who are now living with other family members in Las Vegas.

My adobo recipe has changed over the years. However, the essence of the recipe harks back my early days on Guam when a local family "adopted" me and greatly expanded my cultural and culinary experiences. We remain good friends to this day. I can't thank them enough!

So, if you are new to Guam, or even a lifetime resident, give this recipe a try. Every year, much happiness is derived from what we eat!

Place the cut chicken into a large bowl.

In a separate bowl, mix all the other ingredients, except the potatoes.

Pour the liquid over the chicken and marinate for at least 3 hours, preferably overnight.

Pour the marinated chicken into a large cooking pot. If you are going to add the potatoes, microwave the potato cubes for about 4 or 5 minutes then add them to the pot and cover. (You don't want them too soft).

Bring to a boil, then lower the heat and simmer for 30 minutes. Taste the sauce, and add a bit more pepper, if desired. (Depending on the amount of soy sauce you used, you may want to add just a bit of salt). Stir occasionally.

After 30 to 40 minutes, uncover and continue to simmer until the sauce is reduced and thickened – about 20 to 30 minutes.

Serve with rice. (But do NOT use Minute Rice!)