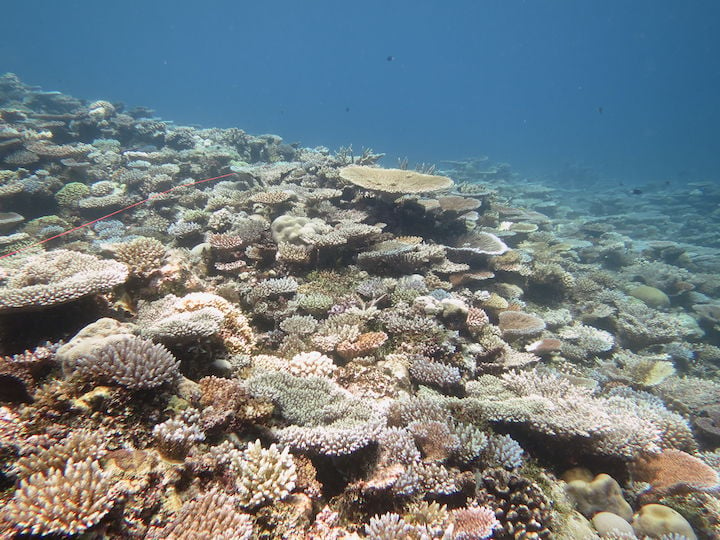 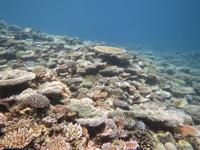 2016: Piis Patch Reef on Chuuk is shown in August 2016. Photo courtesy of the University of Guam 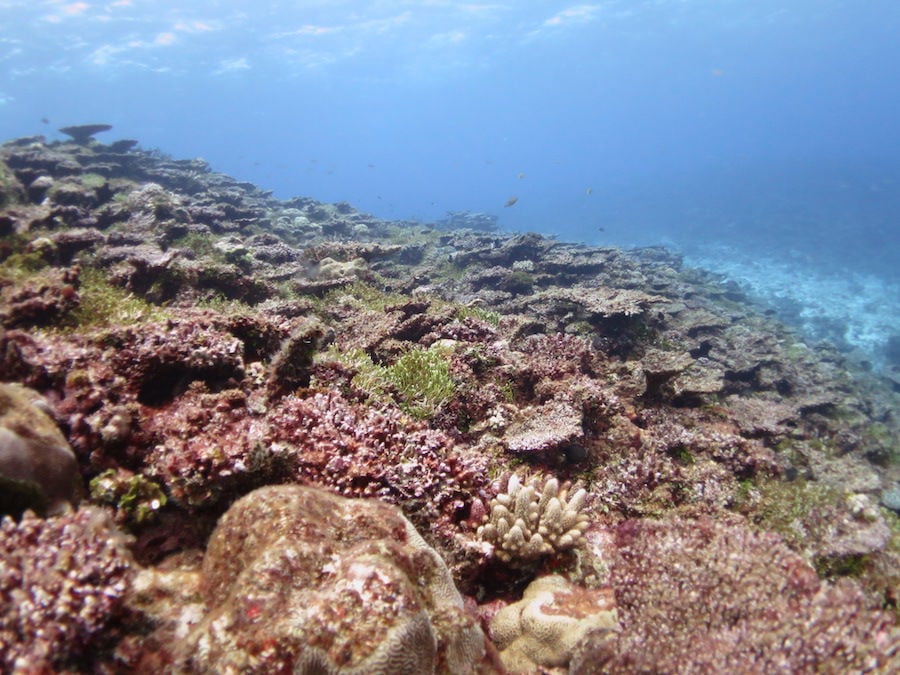 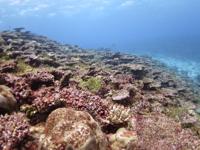 2018: Piis Patch Reef is shown in February 2018 following a coral bleaching event associated with El Niño, or the warming phase of sea temperatures. Photo courtesy of the University of Guam 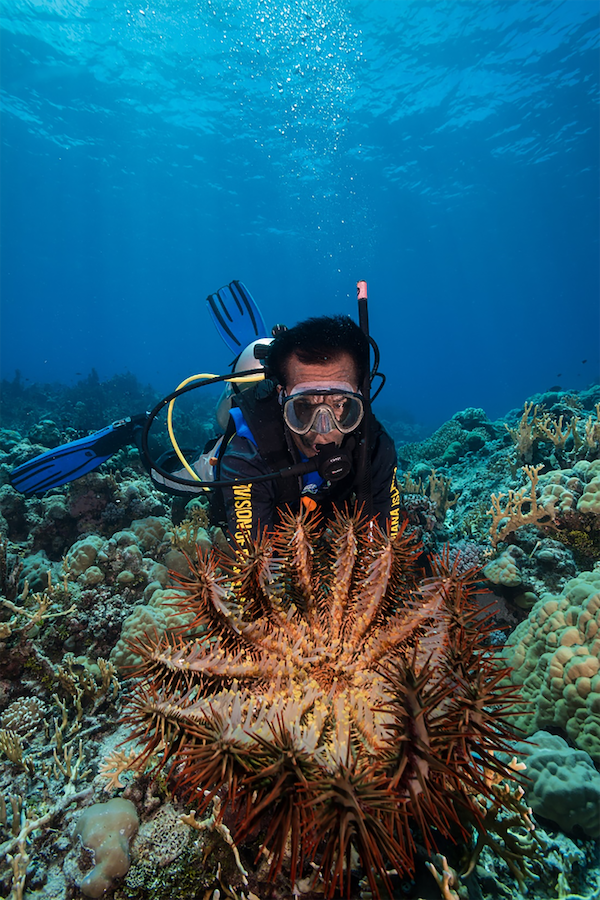 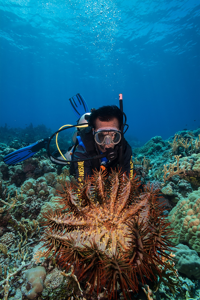 ONE OF MANY: Lorenzo Stephan, a coral reef monitoring team member in Chuuk, holds one of many coral-eating crown-of-thorns starfish found during the El Niño Southern Oscillation event of 2015–2017. A recently published study out of the University of Guam Marine Laboratory found a predictable pattern between starfish invasions and the interaction of El Niño and Pacific Decadal Oscillation climate events. Photo courtesy of the University of Guam 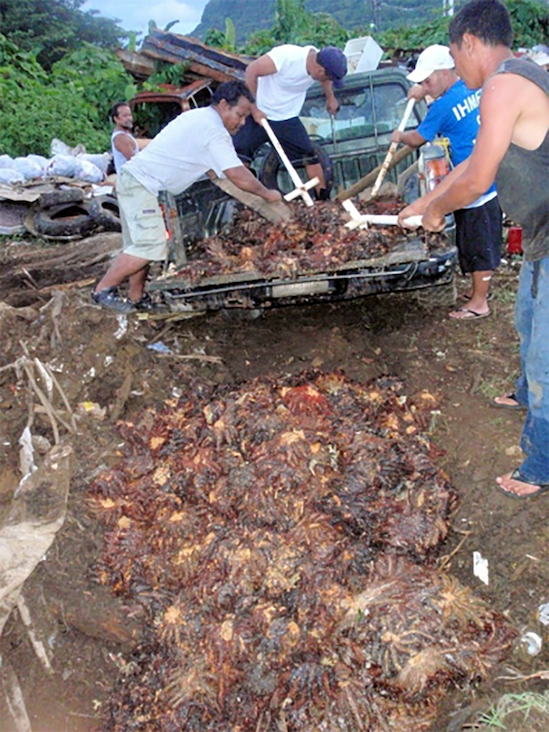 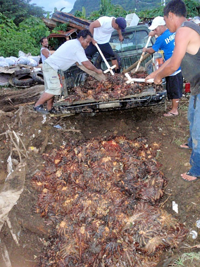 POHNPEI: A coral reef monitoring team in Pohnpei unloads a truckload of crown-of-thorns starfish that they collected from the reef in 2009. Photo courtesy of the University of Guam 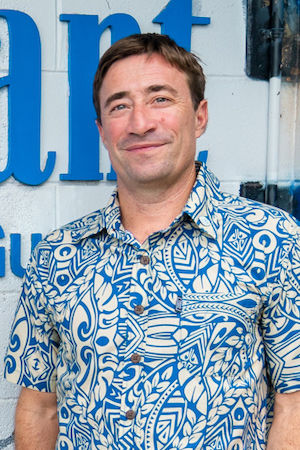 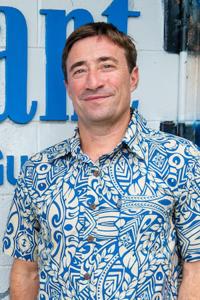 2016: Piis Patch Reef on Chuuk is shown in August 2016. Photo courtesy of the University of Guam

POHNPEI: A coral reef monitoring team in Pohnpei unloads a truckload of crown-of-thorns starfish that they collected from the reef in 2009. Photo courtesy of the University of Guam

Consider it an early warning system that for many nations, islands and jurisdictions could help ensure a plan is put into place to fend off any danger to its coral reefs, which serve as both tourist magnets and ecosystems that provide food for residents.

A new study by the Marine Laboratory at the University of Guam may help researchers predict coral bleaching months earlier than current methods, and may even help predict the invasion of coral-eating crown-of-thorns starfish, according to a press release from the University of Guam. The study was published on May 8 in "Scientific Reports," a peer-reviewed journal published by Nature Research.

Unlike other prediction tools, this study used the interaction of two major oceanographic modulators – El Niño and Pacific Decadal Oscillation, or PDO – to predict how "warm blobs" of seawater and excess nutrients move around the tropical Western Pacific to cause these two destructive events. Existing tools typically provide bleaching warnings two to three weeks in advance; however, this new tool extends the warning period to between three and five months.

Advanced warnings have important implications for coral reef management efforts in the Pacific region and potentially beyond.

"It takes management from a reactive position to a more proactive one," said senior author Peter Houk, an associate professor of marine biology at the UOG marine lab. "Not a lot can be accomplished with only a couple weeks' notice, but predicting bleaching and starfish disturbance events a few months out may give governments and other agencies more time to acquire supplies, create legislation and create support networks to ensure reefs are better equipped to handle these forces."

For example, it allows more time to revise temporary fisheries regulations, raise funds for the removal of starfish and procure supplies needed to support these acts. The authors have predicted outbreaks of starfish to emerge in Eastern Micronesia this year, providing time for Kosrae's tourism industry and resources agencies to gather supplies and build monitoring and removal plans now. Further, the authors can provide warnings for other islands down current to be on the lookout, as starfish outbreaks are known to spread across islands and reefs in the direction of prevailing currents.

Above-average sea surface temperatures are common across the tropical Pacific following El Niño Southern Oscillation events, which are increasingly exacerbated by climate change. However, islands – from Palau to Kosrae – can be affected differently. One may bleach, while another experiences little to none.

That question motivated researchers to study the impact of El Niño interacting with the PDO. Together, the two patterns predict maximum sea-surface temperatures and also the movement of "nutrient plumes" filled with what is known as "chlorophyll a" around the Pacific Ocean that attract plankton and cause the crown-of-thorns starfish outbreaks that wreak havoc on coral. Both sea-surface temperatures and nutrient plumes have been mapped by satellites for years; however, predicting their future has been a challenge.

The researchers analyzed sea temperatures dating back to 1980 and biological data dating back to 1998, including coral cover and chlorophyll a plumes, from 82 survey sites on the main islands of Micronesia to track how they are influenced by the interaction of these two cycles.

The study shows that including PDO events into forecasts may improve predictions of when and where bleaching and starfish outbreaks will occur. The next step will be to build an online resource to host the predictive model for scientists and resources managers to access, and to keep improving the model to the extent possible.

"We provide the first insight into how PDO and El Niño cycles predicted sea-surface temperatures, chlorophyll a concentrations and changes to coral cover across the tropical north Pacific Ocean," the authors said. "These results may be transferrable to other oceanic regions to help predict coral reef status at even larger scales."

Houk's co-authors include graduate students Christy Starsinic and Andrew McInnis of the marine lab, as well as numerous regional researchers including Anthony Yalon of the Yap Community Action Program, Selino Maxin of the Conservation Society of Pohnpei, Marine Gouezo and Yimnang Golbuu of Palau International Coral Reef Center, and Robert van Woesik of the Florida Institute of Technology.