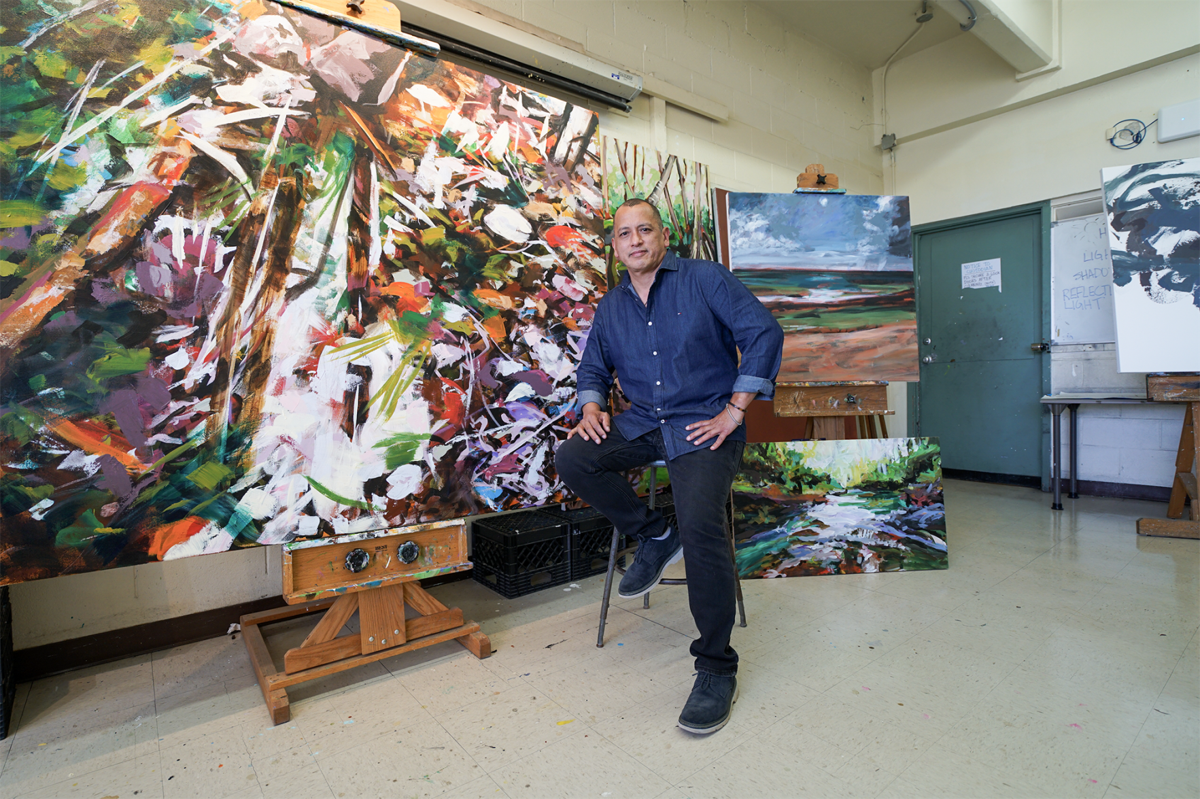 COLORS FOR THE CANVAS: One of the tables in Ric Castro's classroom studio, crowded with dozens of tubes and jars of paint. Robert Clark/The Guam Daily Post 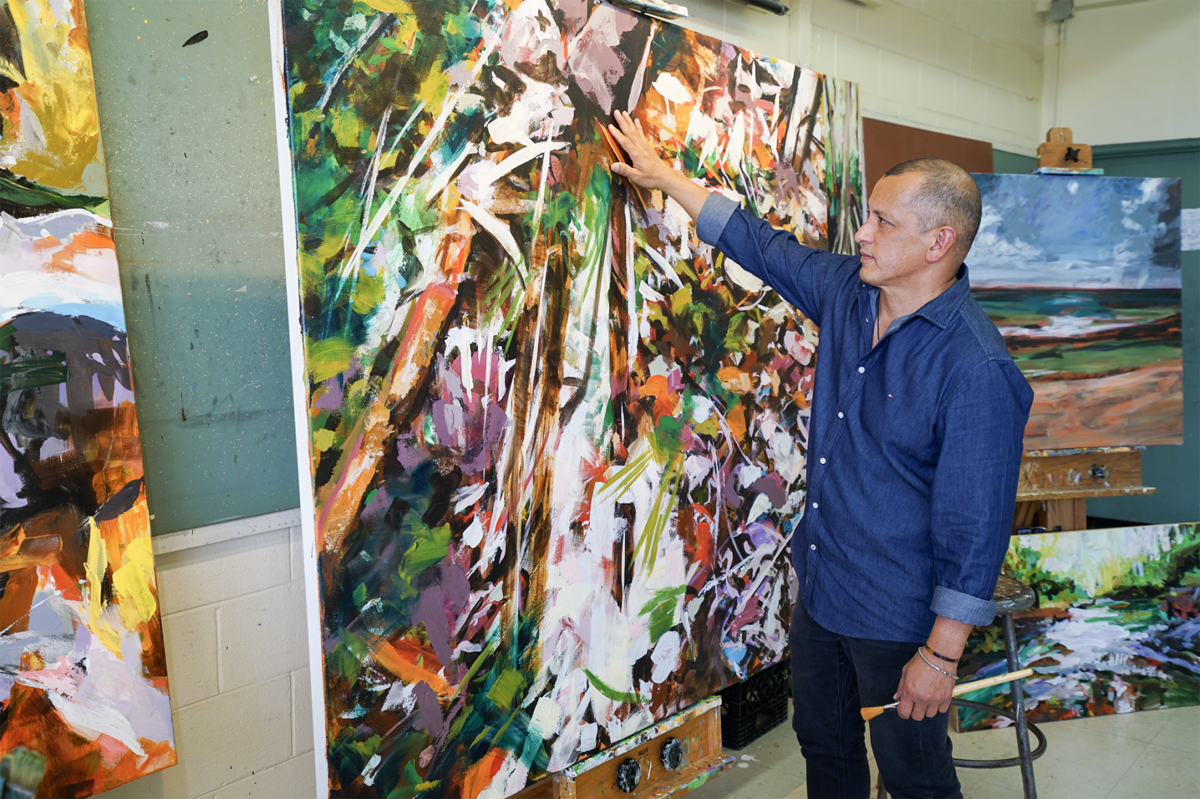 A WORK IN PROGRESS: Ric Castro stands in front of one of his latest abstract works, still untitled – a 62-inch-by-72-inch acrylic painting on canvas. Robert Clark/The Guam Daily Post

COLORS FOR THE CANVAS: One of the tables in Ric Castro's classroom studio, crowded with dozens of tubes and jars of paint. Robert Clark/The Guam Daily Post

A WORK IN PROGRESS: Ric Castro stands in front of one of his latest abstract works, still untitled – a 62-inch-by-72-inch acrylic painting on canvas. Robert Clark/The Guam Daily Post

Ric Castro can't tell you what you're looking at. Or maybe he can – he just won't.

The 60-year-old art professor is in his classroom on the second floor of the University of Guam Fine Arts Building in Mangilao, standing in front of a 62-inch-by-72-inch acrylic painting of – what, exactly?

Splashes of browns and greens here, purples and blues there. Streaks of white.

"If you look at my work, a lot of people – my abstract stuff, which is my nonobjective work – they see fish, they see coral, they see fish bones, they see jungle," he says. "It's just a mixture of the sand, the sky, the ocean, the coral, the fish. All into one. And that's why I love abstract expressionist work, because it's just a jumbled, chaotic mixture of forms that are just pulled out of my mind and transported onto the canvas."

The work itself poses a question, with no correct answer. So it goes.

"That's what I tell people, when they ask me to talk about it – I'm like, 'It's whatever you see in it,'" he says. "They could look at it, 'Oh, I see this. I see that.' That's perfect. Abstract work allows my audience to have a personal dialogue with the paintings, themselves. I don't have to sit there and narrate it for them, you know?"

Castro has been working at the university for more than two decades, instructing and influencing his students, many of whom have gone on to make their mark as artists themselves on and off island.

"I'm somewhat of a dinosaur, you could say, in the art department," he says, with a smile.

Today there are no students in the studio, as has been the case for a while now, since the pandemic forced classrooms to close their doors to in-person instruction. Slowly, students are returning, in smaller numbers than before, but some classes remain strictly virtual – including Castro's next class, which starts in about an hour. "Studio for Non-Majors." Zoom.

He doesn't mind at all, he says.

The semesters spent teaching remotely and social distancing have allowed him to fully inhabit his classroom studio space. A couple of long tables where normally students would be sketching in charcoal pencils or creating watercolor landscapes are now covered in large-format prints of his own pieces, and the stretcher bars and canvas he'll use to create new works. Another table is crowded with dozens of tubes and jars of paint, and here and there Big Gulp cups crammed with paintbrushes of all sizes.

It was during his own days as an art student, far from his island home, that Castro began to embrace the idea of a life putting brush to canvas.

"I stayed on the East Coast, in Philly – for eight years I was there," he says. "That's a lot of downtime away from your island, to assess what you want as an artist."

After earning his associate's degree from the Art Institute of Pittsburgh and his bachelor's from the University of Pennsylvania, he set his sights on the graduate program at the Pennsylvania Academy of the Fine Arts in Philadelphia.

"So, as I finished my graduate program, that's where I became more or less an abstract painter," he says. "I've tried everything – sculpture, printmaking, painting of course. To me, painting was the way to go."

Not all of Castro's work is abstract, however. He's likely best known for what he calls his "junglescapes": scenes of sandy coastlines crowded with coconut trees; or the dense, humid interiors of the island that hide away latte stones and other historical remnants.

Many of his works, "especially the realistic 'narrative' pieces, like landscapes," are derived from the scenery and culture here on the island, and his time away from home as a student only cemented his appreciation for Guam's natural beauty.

One place in particular, he says, has always been close to his heart – his family's scenic ranch at Jinapsan Beach in northern Guam. For years, weekend trips there were "a family tradition."

"We basically grew up there. It became a ritual: Every Sunday, that's where we would barbecue. For my entire life. The only time we didn't do it is when I was off in school," Castro says.

"It's almost like going to church. 'What are you bringing?' 'Oh, I'm bringing the fried chicken.' 'I'm bringing the ribs.' It was like a given. So that beach, really, is, I would say, the catalyst to most of my work. Whether it's literal – you know, taking pictures of it and painting it – or I'm just influenced by the environment and the memories of it."

The property, with its wide-open beaches and towering coconut trees, features in many of his landscapes, from his large acrylic pieces to his smaller watercolors.

It might seem that he has more of these depictions of jungle scenery than he knows what to do with, but he knows exactly what he's going to do with them.

"I have a book coming out, hopefully soon, called 'Junglescapes of Guam,'" Castro says. "And that's a series that I've been working on for over 15 years."

Many of the pieces he's been compiling for the coffee table book include the small demos he'd make for students in his classroom over the years.

"I was doing demos for my students – and my sources, my resources material, is the old family beach up north," he says. "So I'd say, 'OK guys, gather around, we're going to do a landscape in watercolor,' or a landscape in acrylic. So that was my source. I'd just pull out my archive."

Not all the pieces in the book will depict northern beaches, of course, and many of the works were inspired by locations in central and southern Guam.

"Even though I'm attached and have a bias for my beach up north – man, the most untouched, primal areas, in my opinion, are down south," he says.

Castro got the idea for the book, all those years ago, from a fellow painter and art professor at the university.

"Joe Babauta, he was my colleague – he passed away, God bless him – he was the one who looked at it. He said, 'Where'd you get all these paintings? When did you do these?' I said, 'I do them every week, for my students.' He said, 'Man, you should put a book out.' This was like 2003, I think, was when he suggested it."

The book, which he describes as "a gift back to the island," will be divided into two sections: acrylics and watercolors.

"I may break it down into – even though they're 'junglescapes,' I want to throw in some iconic landmarks, like Two Lovers Point, boat basin, Hågat bridge," he says. "So it's not all deep jungle, but I just like the ring to it: 'Junglescapes of Guam.'"

While he assembles works for the upcoming book, Castro is also preparing for the opening of his new art gallery in Harmon.

"I wanted to kind of downscale, but open another gallery-studio where I could work and display," Castro says. He recently closed his gallery at the Tumon Sands Plaza, where for more than two years he displayed his and other artists' works.

He has high hopes for the new space, he says.

"I'm renovating currently in the Harmon Industrial Park. I'm trying to turn this dive area into a new, like, 'SoHo.' I'm hoping it's contagious and other people start renting the warehouses around there."

A work in progress

Back in his classroom at the university, Castro is focused on his latest piece, the large acrylic painting on canvas he hopes will find a middle ground between his two major influences.

He stares intently at the canvas, running his hand across a crash of colors.

"It looks very much abstract right now, but it's a work in progress," he says. "I'm going for this different angle – I'm going to try and have it somewhere in between my straightforward landscapes and my abstractions."

Finally, he describes the origins of the piece, this halfway point between the abstract and the objective. The image, and its intent, come into focus, and he asks:

"Abstract work allows my audience to have a personal dialogue with the paintings, themselves. I don't have to sit there and narrate it for them."

Some of Ric Castro's abstract paintings are now on display at the Isla Center for the Arts, located in House 15 on Dean's Circle at the University of Guam campus in Mangilao.

The exhibit also features works from the other faculty members of the university's Fine Arts Program:

Admission is free, but donations are welcome.

Heading into a third year of the COVID-19 pandemic, the struggle of businesses and families to make ends meet continues. Read more

Election years pose so many opportunities for aspiring and existing public officials. The island has so many poorly or unaddressed needs that … Read more