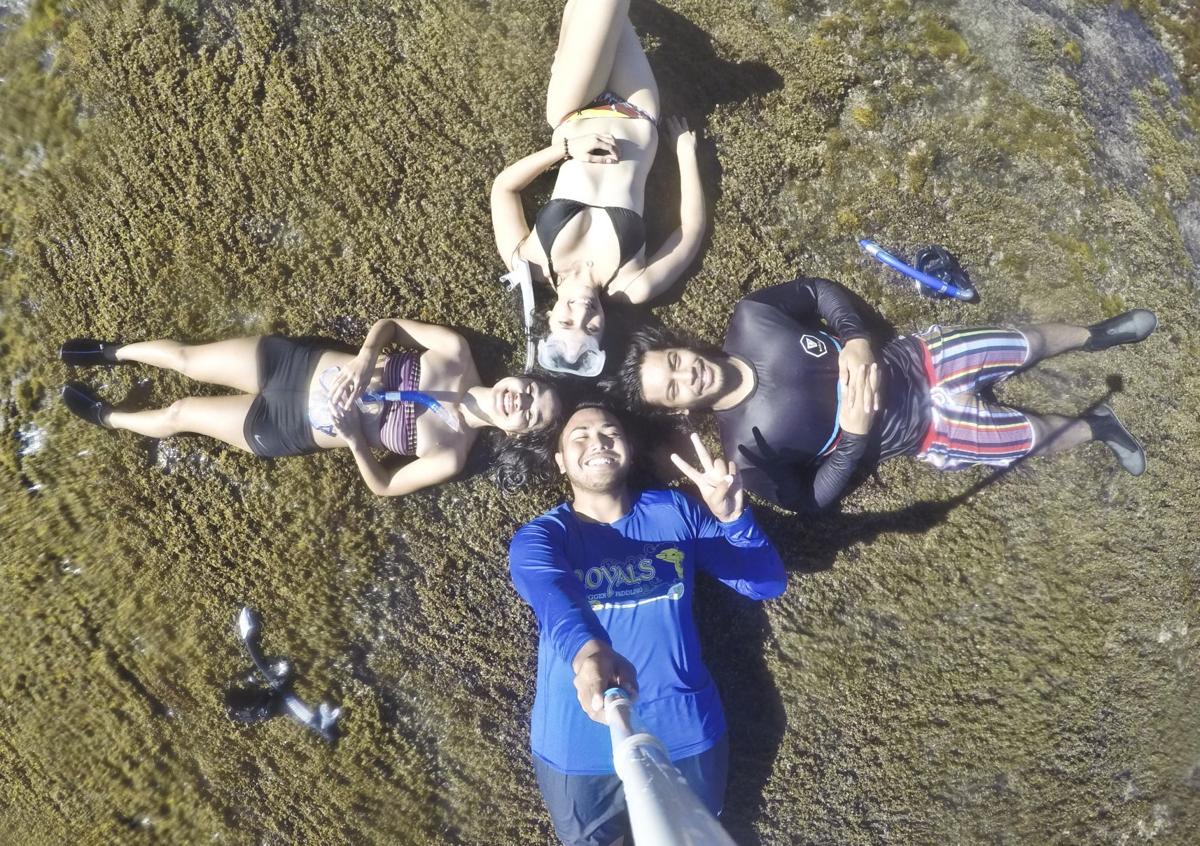 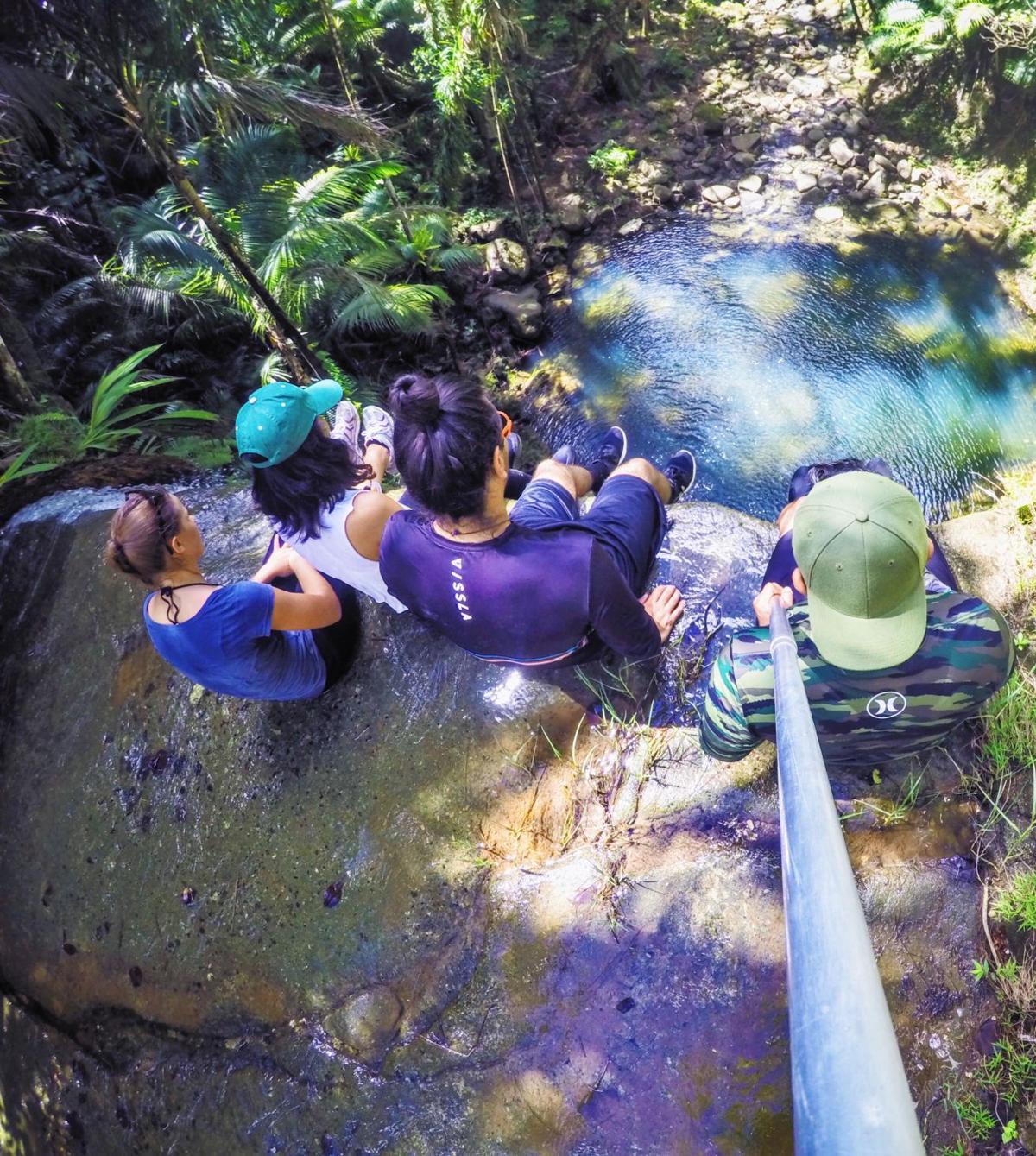 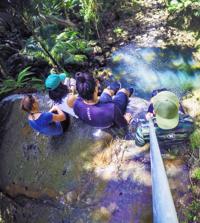 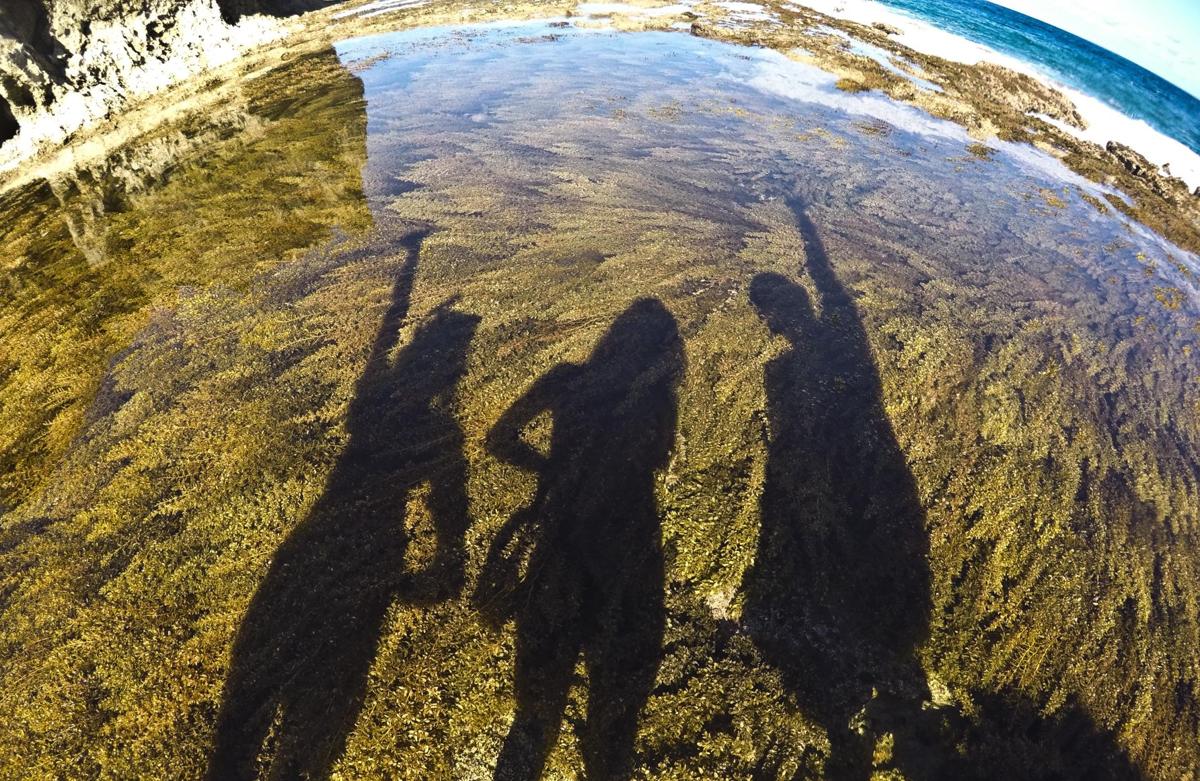 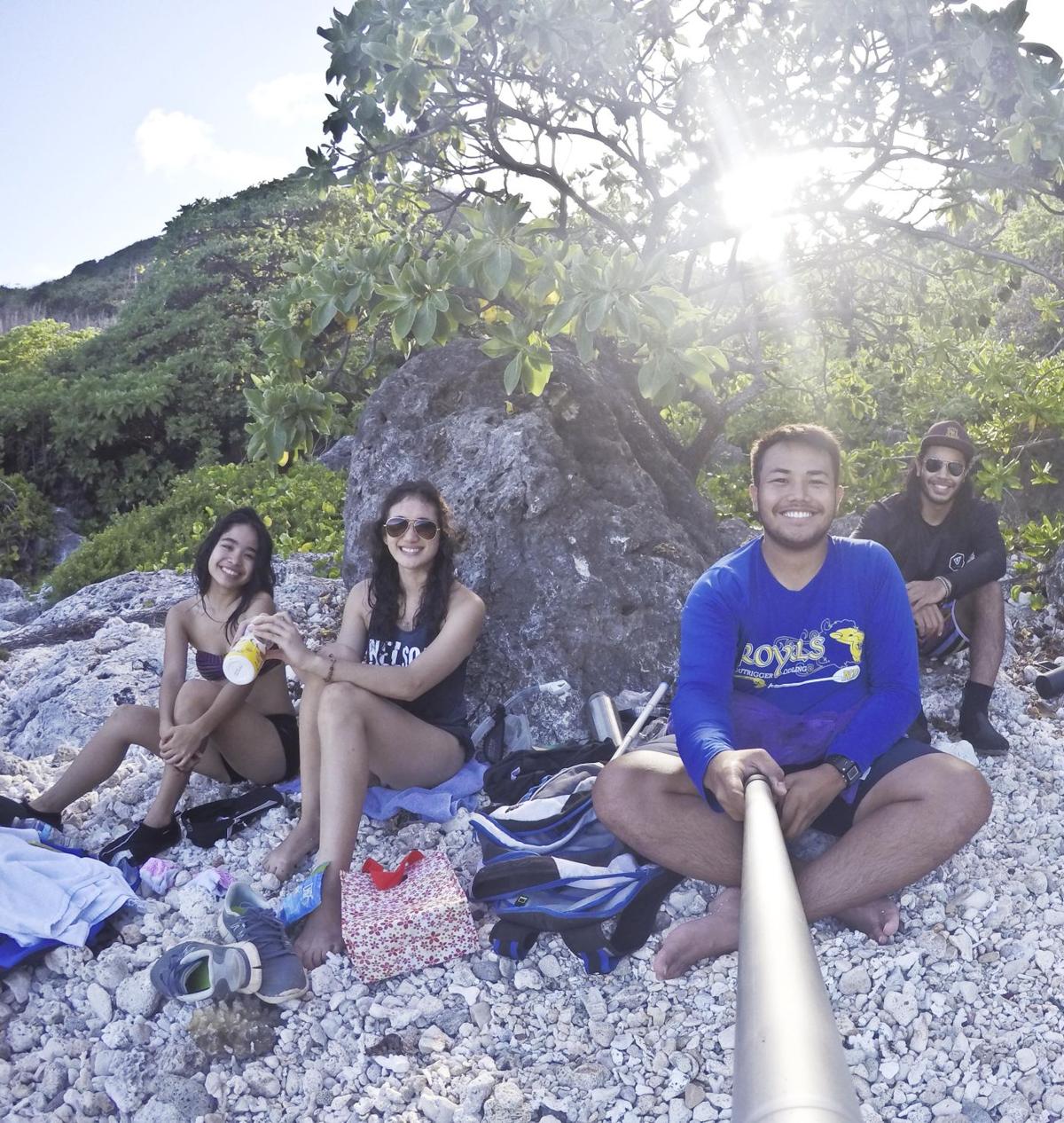 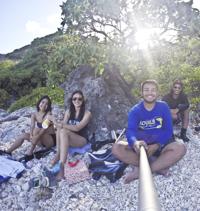 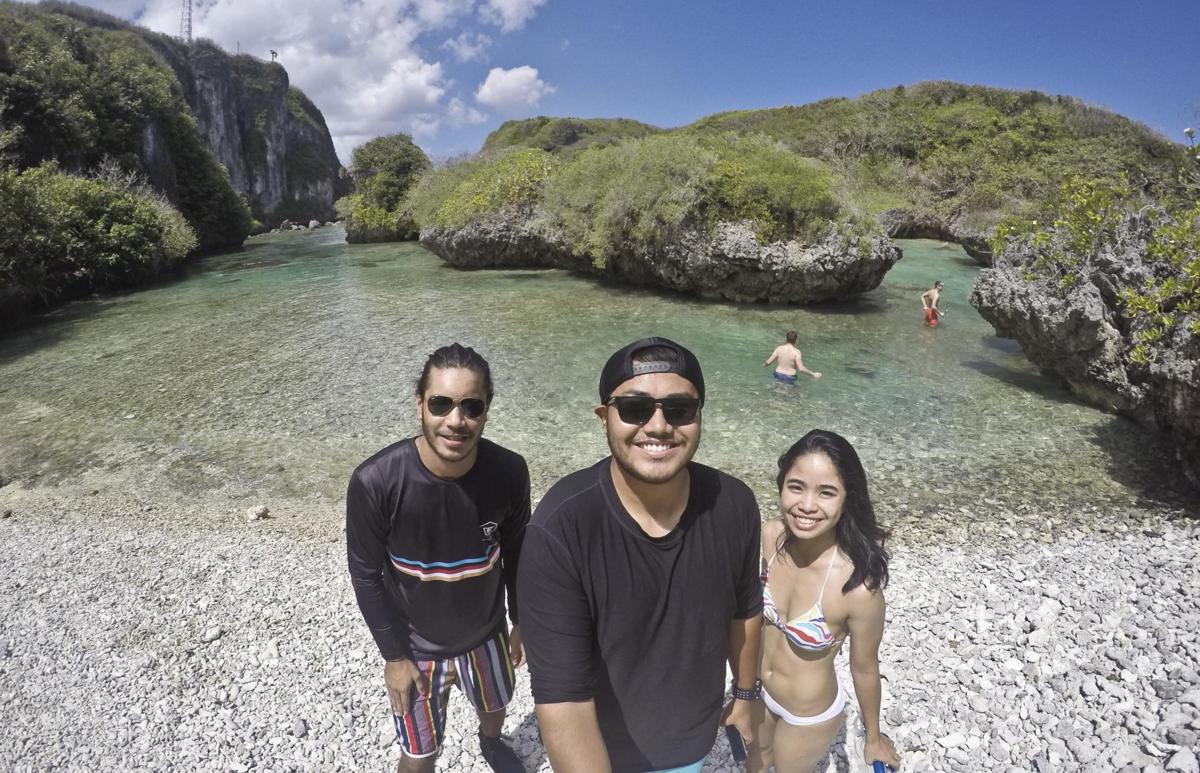 Walking deep into dark jungles, across remote coastal plains and into dangerous valley ravines just wouldn't be as safe or enjoyable without the company of friends.

While the soothing sounds of nature are incomparable to bustling cityscapes, something even more memorable than whistling winds and rustling tree leaves is a genuinely good time with friends.

Through all the hikes featured on Spots on the Rock, it's been clear to see that we have beautiful landscapes and hidden gems across the nooks and crannies of Guam.

I'd be willing to venture you haven't seen or ever heard of the many natural wonders we have on island, but even though I write about them routinely, they're not what's most important to me.

I don't think I say it often enough, but in the spirit of Thanksgiving, here it is: I'm grateful for the many friends who have joined me through hundreds of hikes within the past two years alone.

Besides the beauty of nature, these hiking buddies of mine have made every hike a memorable one. If it weren't for their friendship and good spirits, a lot of these photos would be meaningless to me.

So, I thank them for the good times past and hopefully better ones ahead!

If I had a dollar for every time someone asked, "Who do you hike with?" I could probably buy new friends. ... Just kidding.

I've hiked to different places with different people. On Guam, hiking is one of the few constant "things to do," so I take advantage of it, and it's not too hard to find people with similar outdoor desires.

My two main hiking buddies for the past two years have been Michaela "Mika" Sablan and Paolo Cruz. Although they're both my classmates from Notre Dame High School, neither of us ever talked too much to one another back then.

Paolo is currently the oh-so-famous drummer of The John Dank Show. He's the tall, long-haired fellow in the photos. He used to be our Tarzan, until "Justice League" came out. He is now our Aquaman.

Mika generally keeps to herself and has the most amazing taste in indie music. She's a cultural dancer at the Guam Reef and Olive Spa Resort, as well as the Guam Beach Bar six nights a week. Although she stands barely over 5 feet, she keeps up pretty well with the big guys.

We were all acquaintances at best, but when I first started hiking, Mika and Paolo would always reply to my Snapchats, wanting to join the next. The rest is history!

I don't think I ever would have accomplished as many hikes as I did without them. During the spring of 2016, we'd hit a new stomping ground two or three times a week. We were on a hiker's high and always motivated each other to go. I'm pretty sure we all skipped our classes more often than hikes.

Paolo has been the leader of our trio, not necessarily because he knows where he's going (he doesn't), but because he's fit and always focused on the destination.

Mika is usually in the middle, following whoever's in front of her, not knowing where we're going, but confident we'll get there. She always comes in clutch with snacks, even though it's usually nuts and seeds. Sigh.

I usually bring up the rear, taking strides to capture our journey, and also because I'm probably catching my breath while trying to keep up with these two regular gym-goers.

Looking back at our hour-long treks with the sun beating down and our destination nowhere in sight, I couldn't have asked for better hike buddies.

They never complain. In fact, both Paolo and Mika are the most easygoing, carefree people I know. Those attitudes are a blessing when hiking in Guam's godforsaken wilderness. I'm grateful for their good spirits.

In fact, you would think dropping your phone off the edge of Tarzan Falls would throw anyone into chaos, but not Mika. This is one of our "that one time" stories, by the way.

After a quick-and-easy hike to the base of Tarzan Falls, we decided to explore the upper area of the falls, which was nice until we decided to take a seat on one of the ledges.

Just a few feet across from the cascading waterfall and about 100 feet or so above the falls' base, we sat casually along the Tarzan ledges, relaxing with the concrete jungle before us.

I was busy taking photos. Paolo was probably on his phone. Mika, always relaxed and good-natured, was probably just enjoying the sights – until her phone plunged at least 50 feet down onto another ledge near the bottom of the falls. Yep, that happened.

We freaked out, but even she wasn't destroyed like most millennials would probably be. Paolo climbed a rope down the face of the rock wall nearby, retrieved her shattered phone and came back up somewhat victorious.

Despite not falling into the waterfall's pool, which would have been the worst-case scenario, Mika's phone was still pretty much broken, but she sure wasn't!

We carried on, almost as if nothing happened, and I know Paolo would have reacted the same, as would I. We've always been three peas in a pod, truly.

There have been other causalities and worst-case scenarios that we've braved, like Mika using a faulty "waterproof" phone case to go snorkeling, me falling at virtually every turn, and all of us getting lost pretty badly a handful of times.

I'm grinning as I jot down these memories. I guess I've never really thought about how much meaning my friends have brought to the hikes we've accomplished.

At some point, a lot of these good times – and even the "bad" – became memories, and you never really realize it until you're sitting at your work desk, writing a story about it months later.

We have no problems boasting about food and family during Thanksgiving on this island. Those themes of the holiday are natural to Guam, but reflection is often left out.

Take the time to review your snapshots of good memories from time to time. Reflect on the laughs, smiles and conversations. Remember who was there and how it felt to be surrounded by people who value you.

Soak it all in and be ingrained with gratitude for the things and people who make life worth living.

Winnie the Pooh said it best: "We didn't realize we were making memories, we just knew we were having fun."

Have a fun holiday season this year, whether you're hiking or not. Someday they'll be your fondest memories.