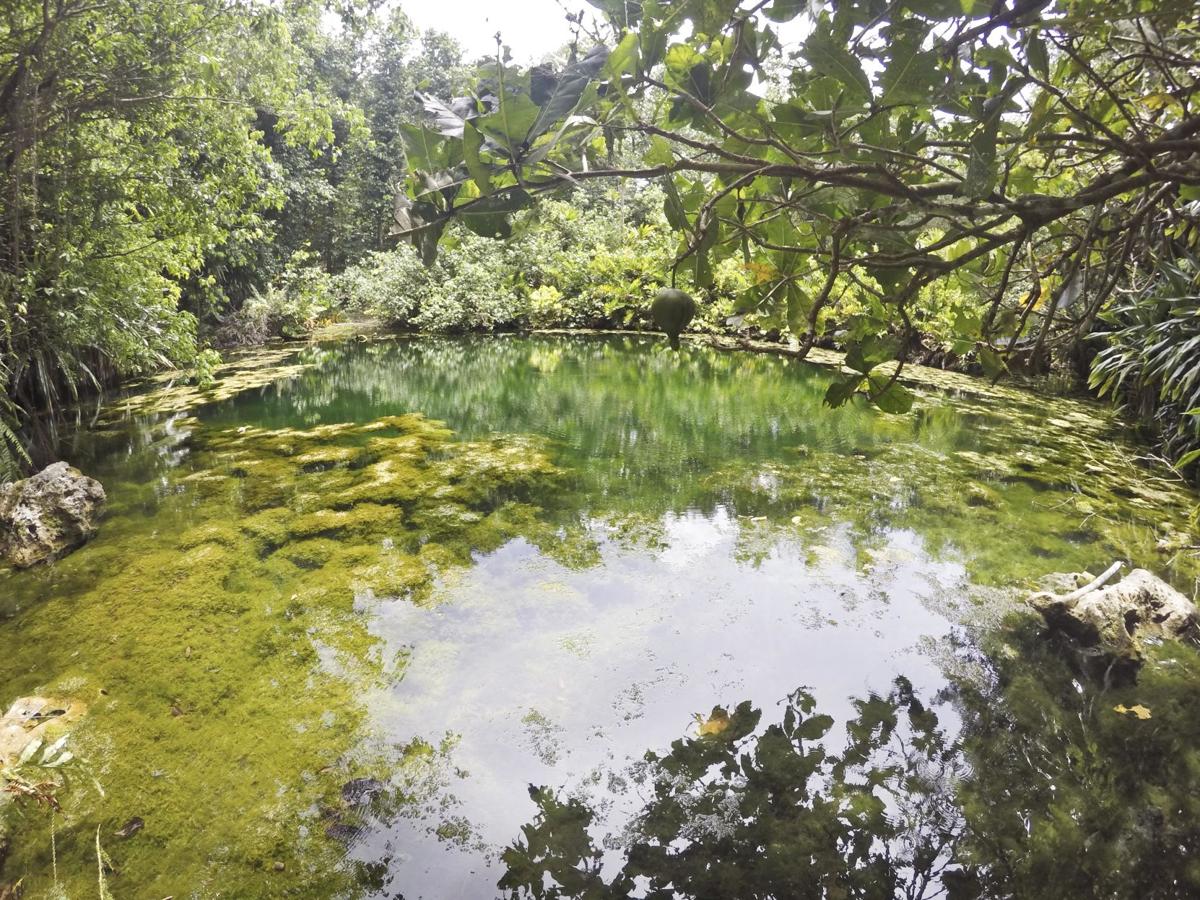 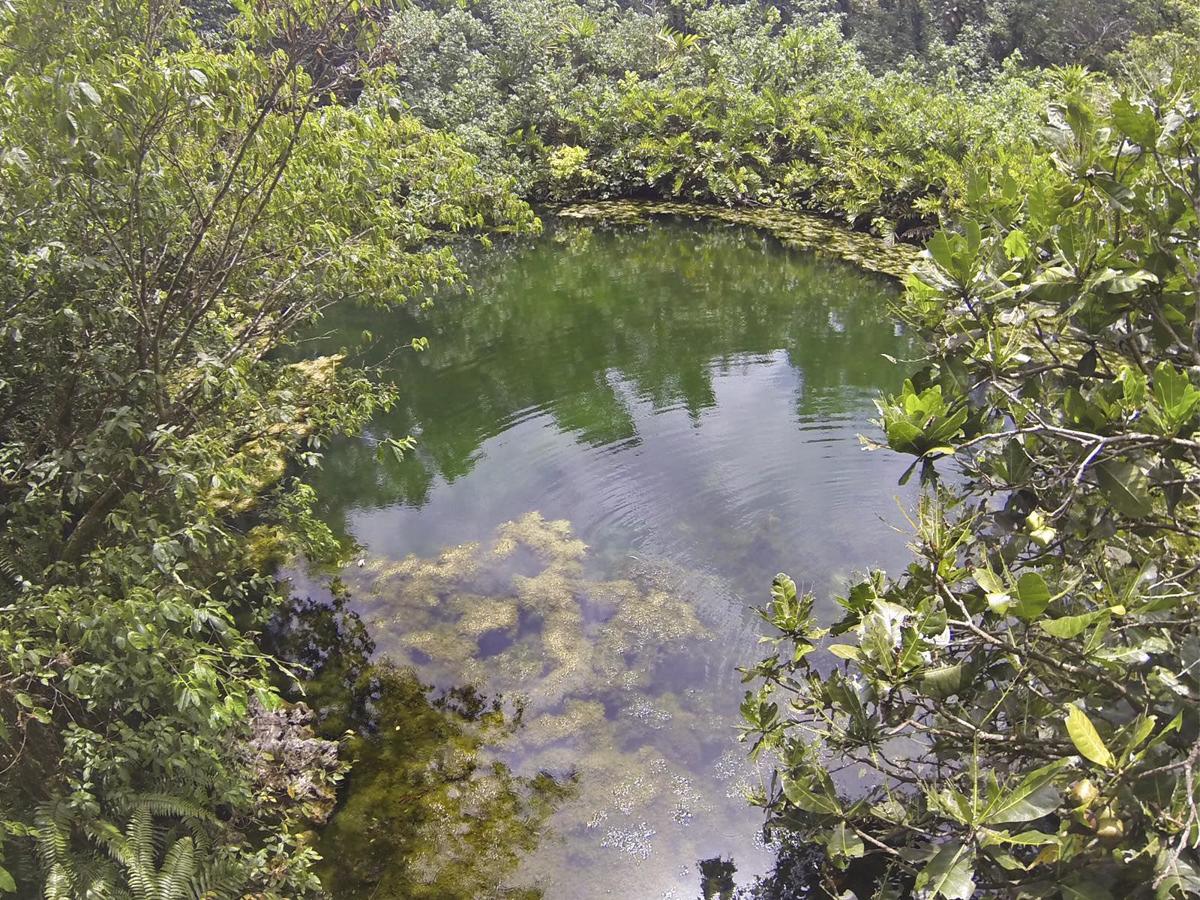 GREEN JUNGLE GEM: Lost Pond, a green gem in the jungles of northwestern Guam, gets its color due to algae covering the isolated freshwater sinkhole, as well as the tinted reflection of the surrounding jungle. The Guam Daily Post 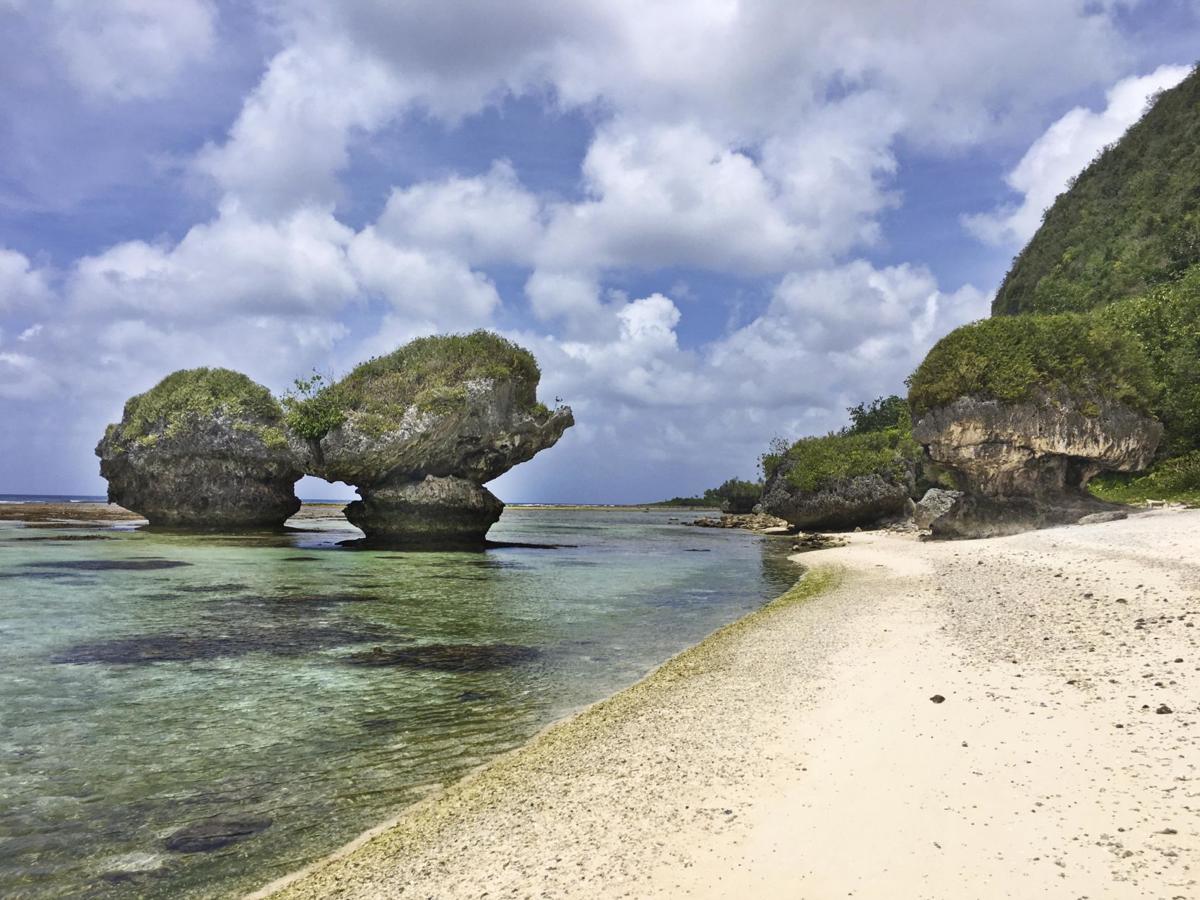 A LINK TO THE PAST: Hila'an Beach, the site of an ancient CHamoru settlement, is a white, sandy welcome to the long beach hike ahead, captivating with its mushroom-shaped rock formations jutting out of the shallow water. The Guam Daily Post 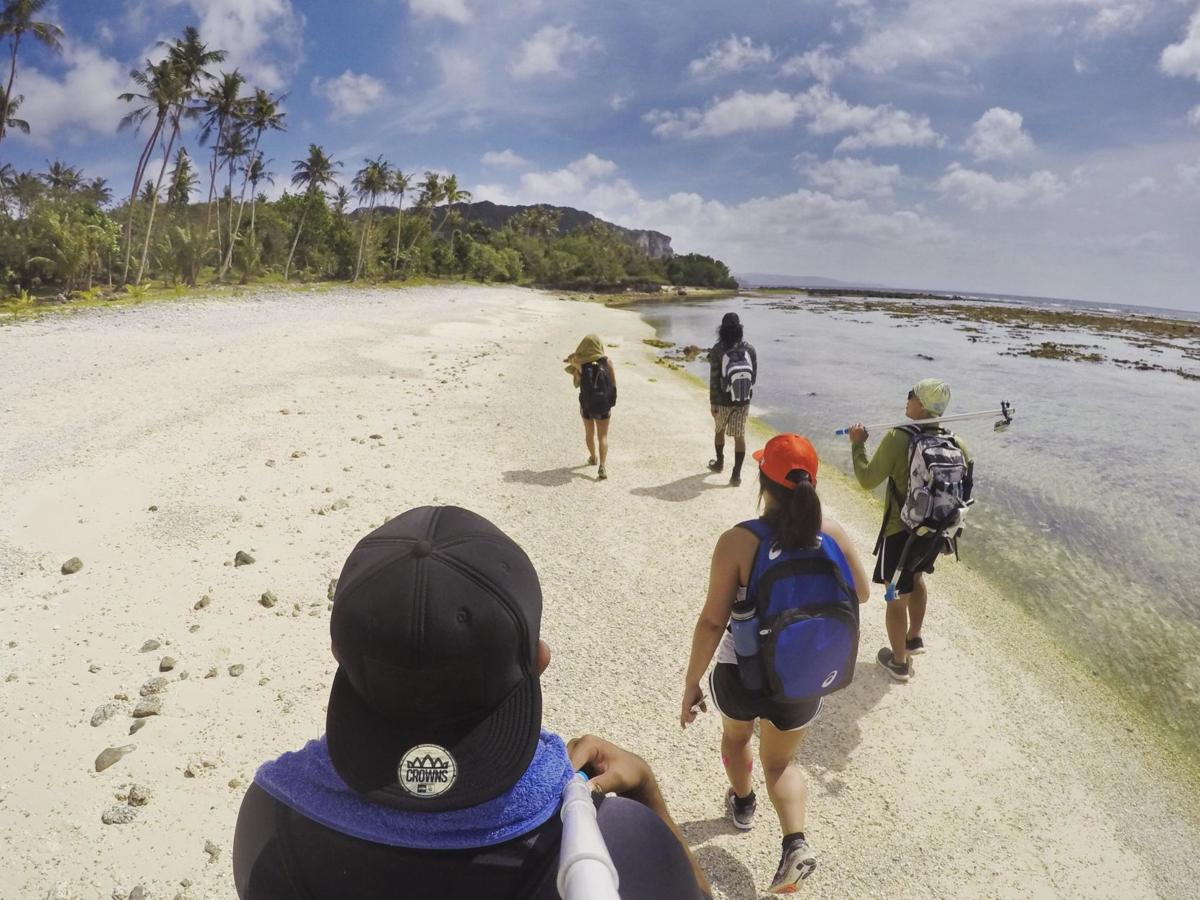 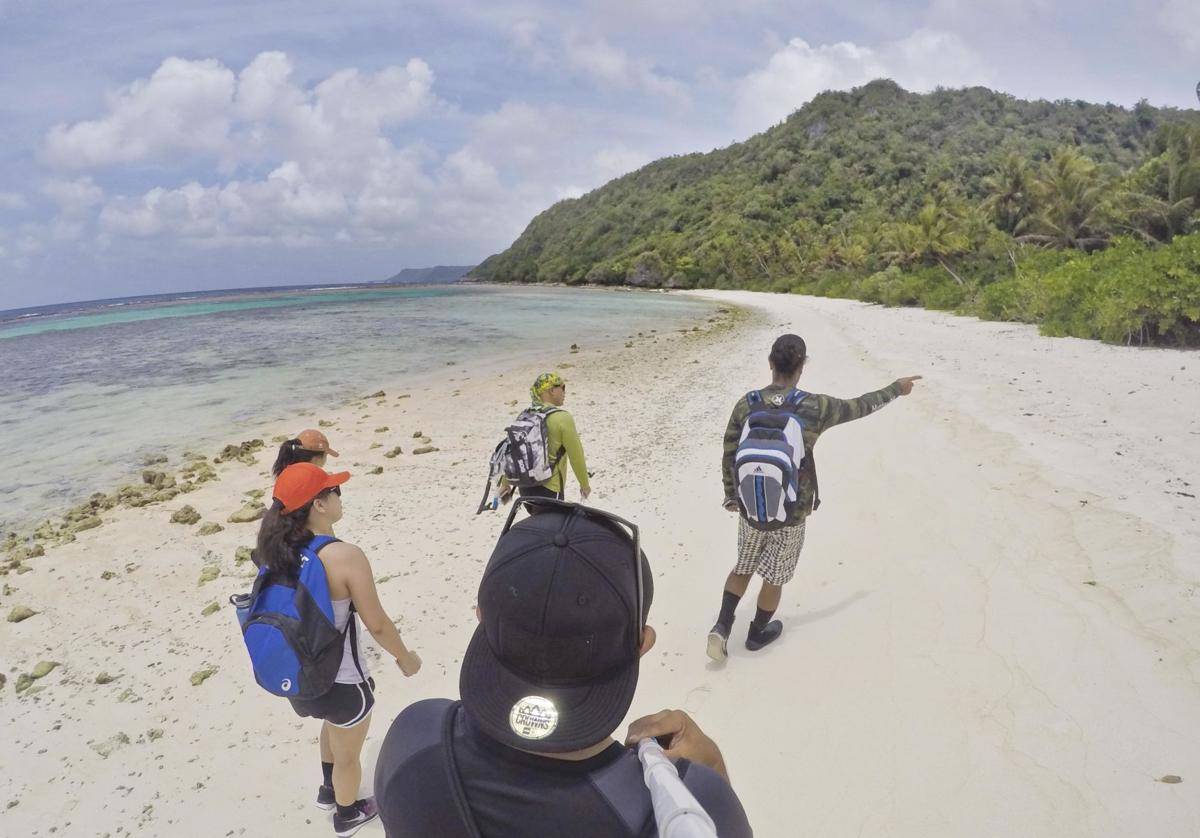 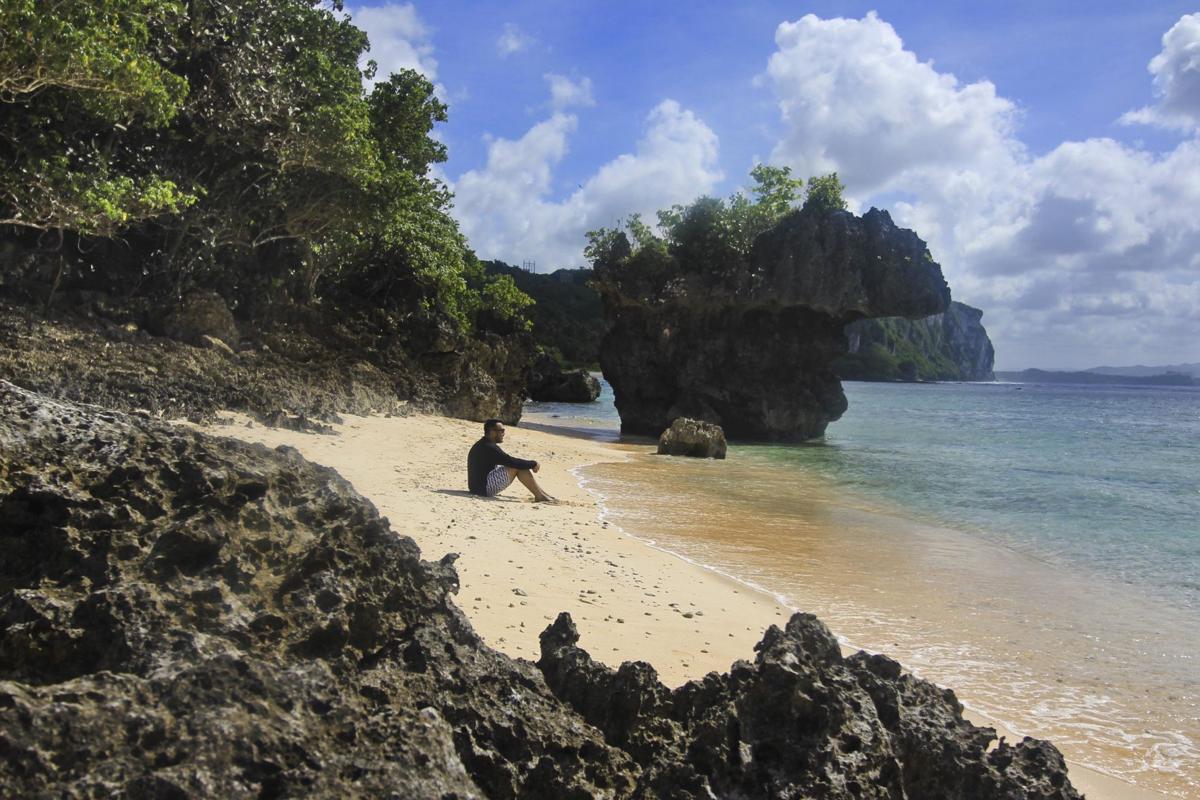 FUN IN THE SUN: The beach near Shark's Hole in Dededo. The Guam Daily Post 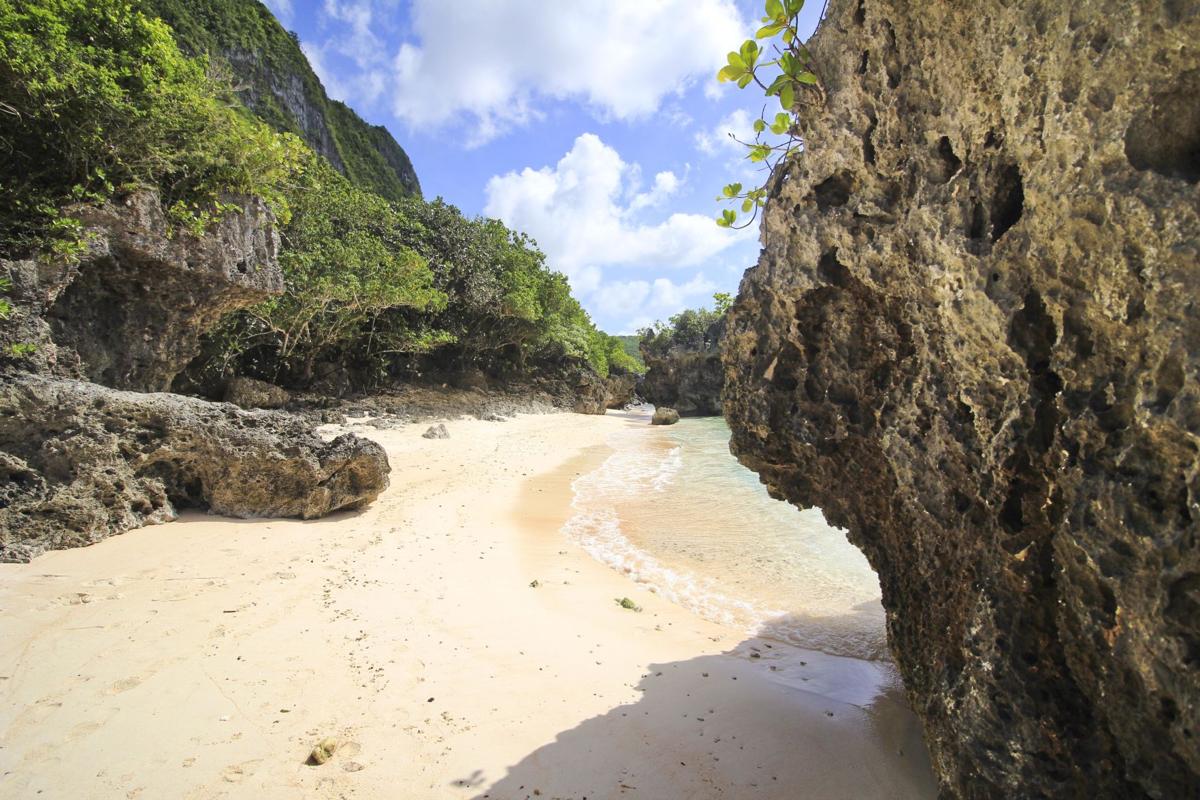 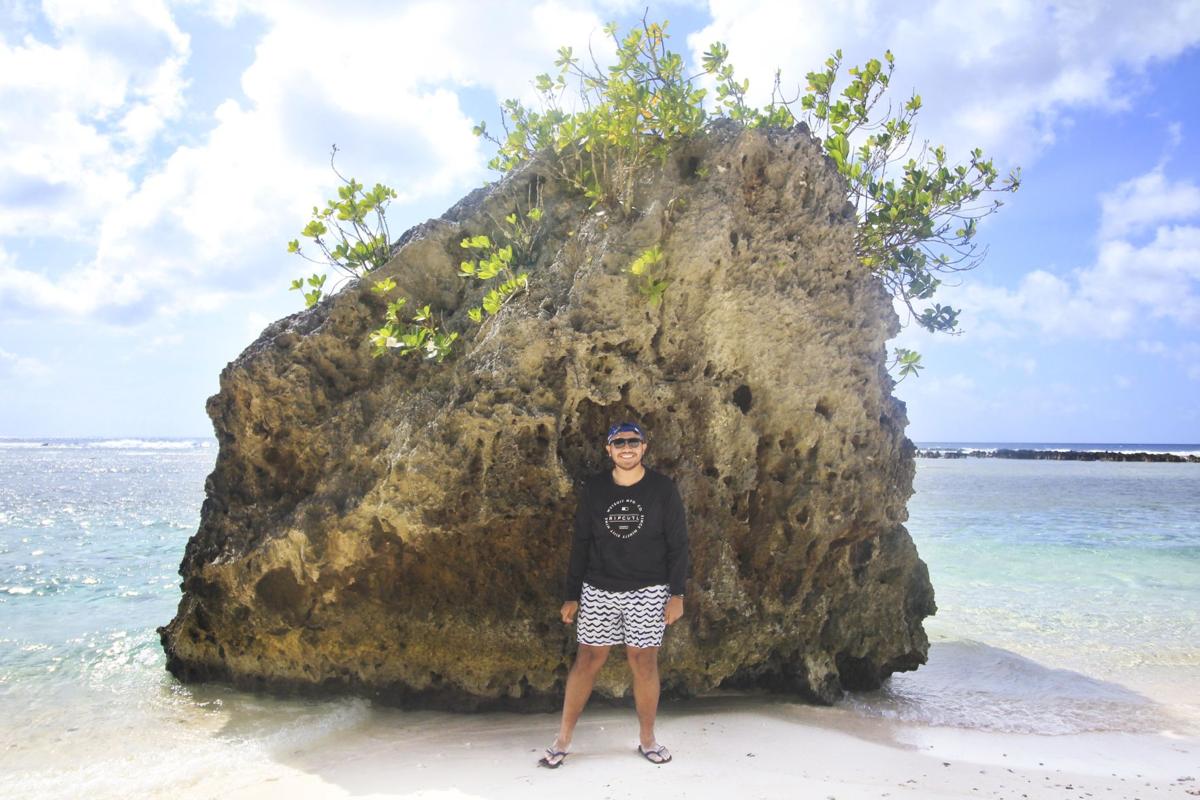 The year is 1719. The thirst for adventure is real, and there's a boat heading out to sea with your name on it. Hop on board!

Embark on an island adventure like no other, surging past sea swells that crash dramatically against the seashore.

The treacherous trek sounds serious, but it's no match for the rush of recklessness that surely kicks in.

The hike to Hila'an Beach, Lost Pond and Shark's Hole unfolds like chapters out of Daniel Defoe's "Robinson Crusoe," which tells the story of a castaway living on a remote island in the Caribbean.

If coming from northern Guam, cruise south on Route 1/Marine Corps Drive. Immediately after passing Micronesia Mall, prepare to turn right on to Route 34, just before a Shell gas station with a Jack In The Box.

If coming from southern or central Guam, cruise north on Route 1/Marine Corps Drive. Immediately after passing a Shell gas station with a Jack In The Box, turn left on to Route 34, just before Micronesia Mall.

Turn left at the next intersection that comes up, and continue on the highway as it passes Two Lovers Point (Puntan Dos Amantes) to the left, and Core Tech facilities to the right.

Winding down the steep and rugged road, you'll soon reach Tanguisson Beach Park. Cross the pothole-studded entrance and find a parking spot beneath the trees by the beach. Park here.

You (probably) won't encounter any cannibals, captives or mutineers in this isolated part of the island, save for a series of other exciting adventures en route to the hike's three dreamy destinations.

Hila'an Beach, the site of an ancient CHamoru village, is a white, sandy welcome to the long beach hike ahead, captivating with its mushroom-shaped rock formations jutting out of the shallow water.

Lost Pond, which isn't as hard to find as its name suggests, is a large freshwater swimming hole located in a dense jungle just 50 feet from the beach.

Shark's Hole, also known as Shark's Cove, is a pristine, underwater playground – and one of the island's best snorkeling sites, complete with riveting reef life and colorful coral.

To start, hit the beach and find the jungle path to the right. Running parallel to Tanguisson Beach, follow the rocky jungle trail as it twists and turns around several trees.

In less than five minutes, you should break out on to the beach with wide-open skies and blissfully blue waters before you.

Spend some time exploring the sandy shores, combing the beach for tropical treasures. There are tons of stunning sea glass, seashells and peculiar pebbles to find!

Just half a mile down the coast is Hila'an Beach, a hot spot for regular beachgoers. The area is characterized by its mushroom-like rock formations and surrounding tropical foliage lining the beach.

Take advantage of fun photo opportunities by safely wading through the water to the rugged rock plumes.

Continue your string of beach bonanzas by following the coastline north. The next half hour to 45 minutes is literally a long walk on the beach to the next destination.

On a calm, sun-shining day, this part of the hike is a breeze, so beware the weather conditions. When it's low tide, you can easily walk through the shallow water, about 1 to 2 feet high, around the next few rocky outcroppings that block off the beach.

However, when the water's rough and waves are crashing, you'll have to walk directly over and through the rocky terrain. Look out for any foot- and handholds that can assist you.

After close to 30 minutes of seaside strolling, passing two distinct lagoons, your next marker is an old, rusted metal cross.

Unmistakable, this weathered cross commemorates the many souls lost at sea, dozens of fishermen and swimmers who have died in the nearby waters.

Just beyond the cross lies the last lagoon, home to the last couple of destinations on our hike. To find Lost Pond, walk north along the beach, and be on the lookout for a slight opening into the jungle to your right. Enter here.

Find and follow colorful markers tied to trees. Note that the pond is no more than five to 10 minutes away.

Following the flags along the beaten jungle path, you should eventually come to a rope that has been added to the trail in recent years. This makes finding Lost Pond a walk in the park.

Use the rope to lead you all the way to the pond, and in a matter of minutes, you'll be there!

Once you reach the swimming hole, you might notice just how green it is. This is due to algae covering the isolated freshwater sinkhole, as well as the tinted reflection of the surrounding jungle.

Go for a swim in the refreshing water before venturing back out to the beach. There is a rope swing nearby, and reportedly there have been freshwater turtles at the pond, as well.

To get to Shark's Hole, retrace your steps out of the jungle and back to the sandy shores of northwestern Guam.

Notice the light blue patch of water out in the distance. That is Shark's Hole! This popular diving and snorkeling spot is a unique underwater utopia with roaring reef life and robust coral communities.

Not to burst any bubbles, but, of course, "Shark's Hole" got its name for being a nurse shark nursing ground.

While this theory might thwart hikers from exploring the deep blue seas, rest assured that sightings are rare, and that nurse sharks are harmless to humans. They're even part of interactive marine exhibits worldwide.

After living life as a castaway, you may or may not want to return back to civilization. But if you do, simply retrace your steps back to Tanguisson Beach.