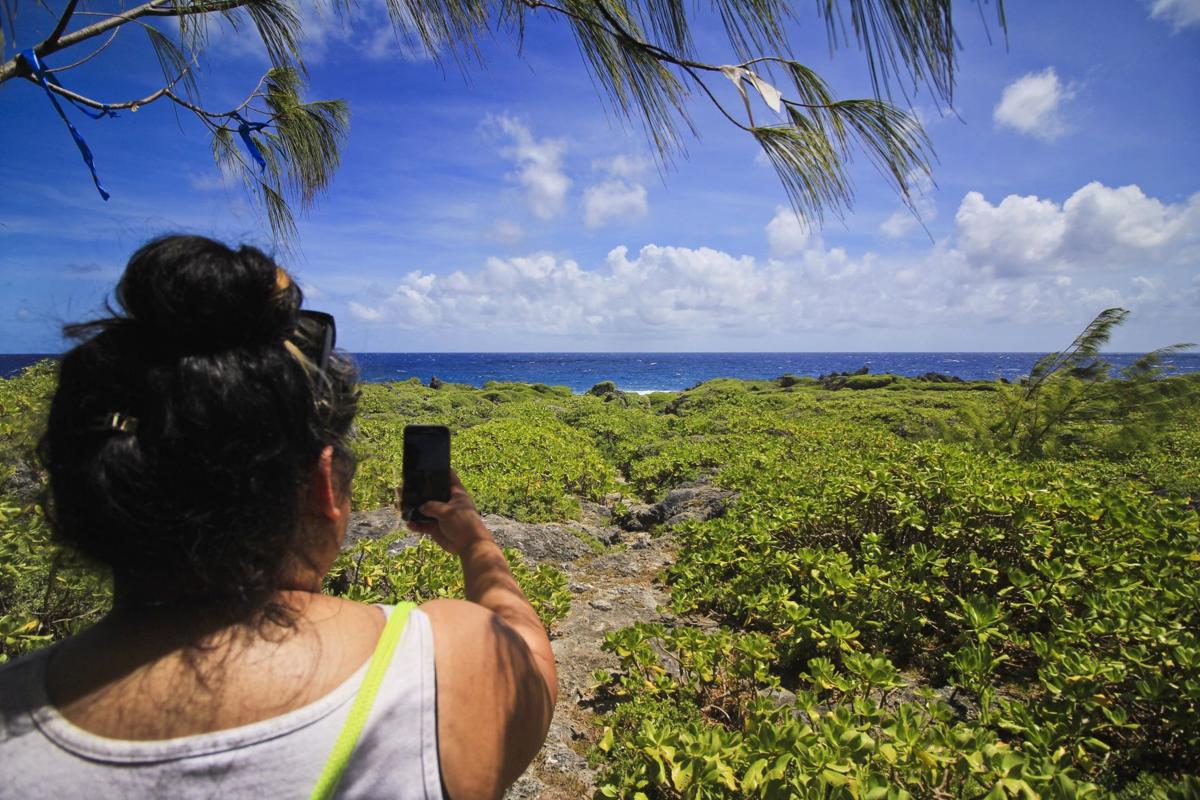 LIMESTONE LANDSCAPE: The first scenic sights of the coastal area at 1,000 Steps in Mangilao will naturally make you take your phone out. A blanket of tropical plants covers the limestone landscape. Tihu Lujan/The Guam Daily Post 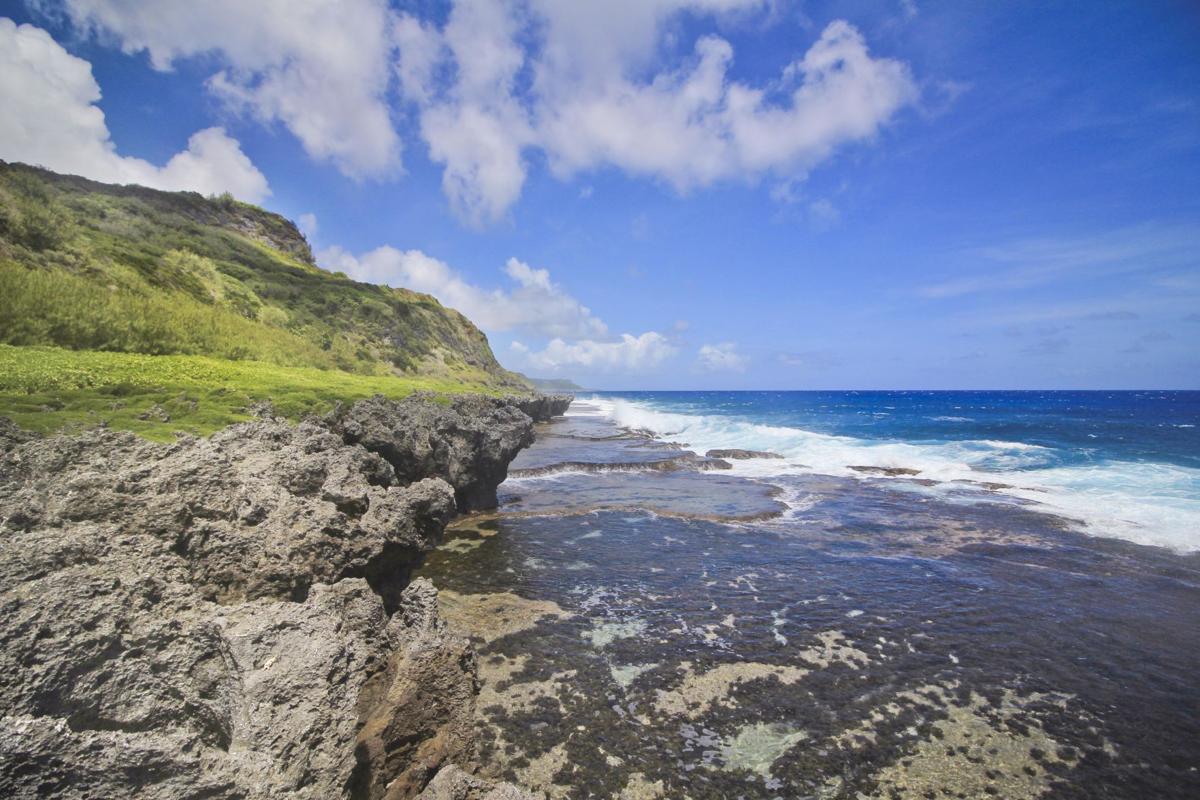 BATTERED AND BEATEN: Watch the ocean's waves roll in and crash onto the battered, weather-beaten coastline at 1,000 Steps in Mangilao. Tihu Lujan/The Guam Daily Post 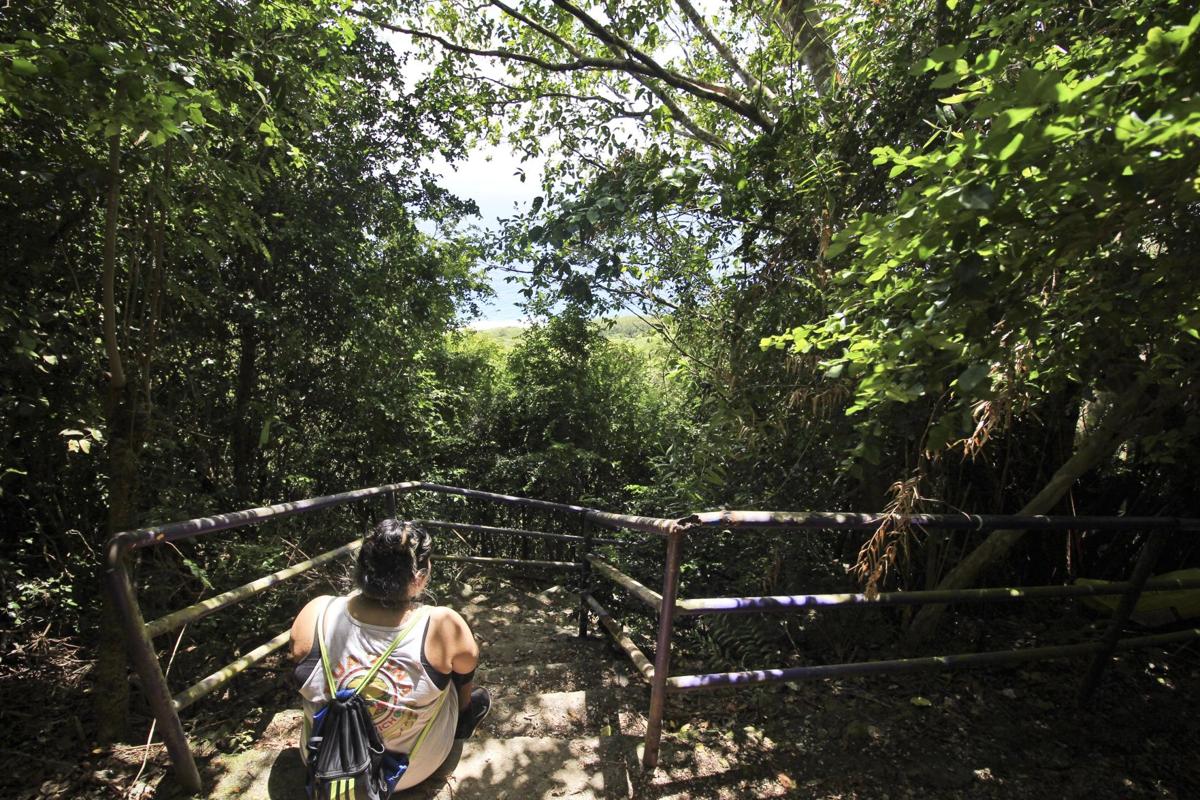 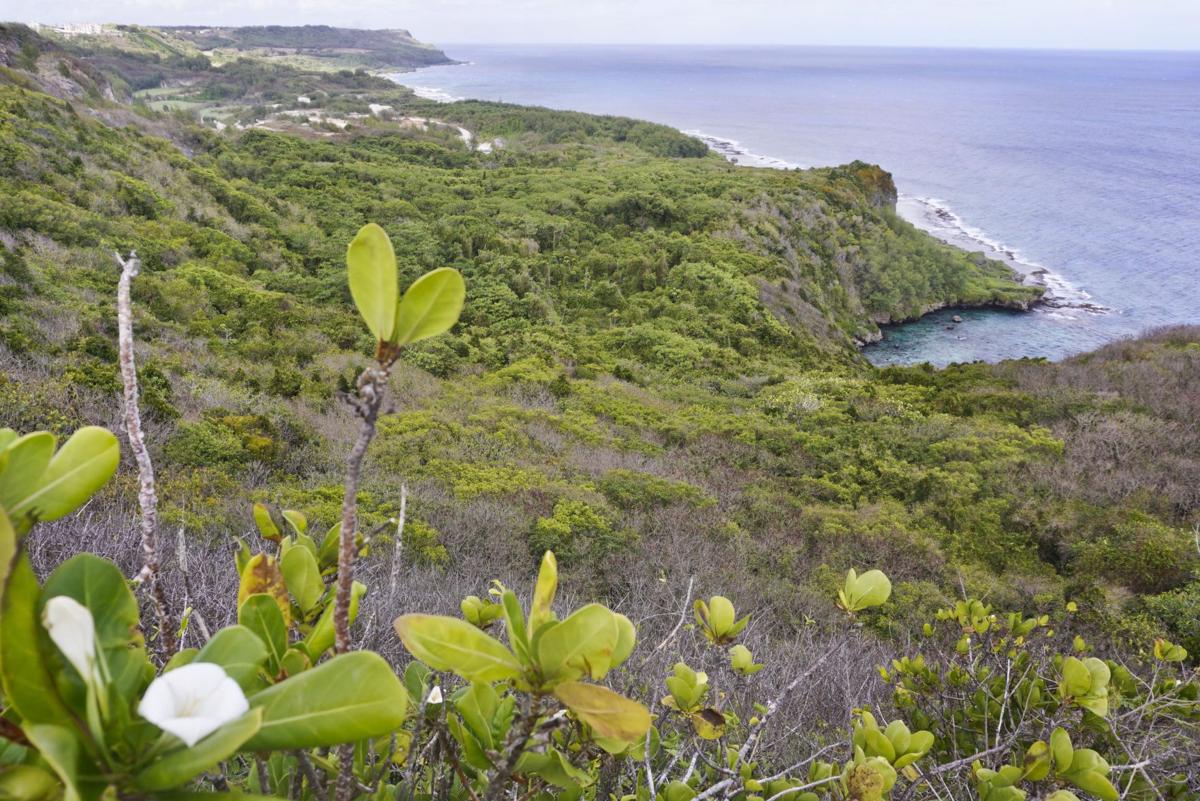 WELL WORTH IT: One of the lesser known hikes on Guam, the trek to Fadi'an Cove is tough and trying, but rewards the lion-hearted with stellar views of an isolated island spot, and treats the tired to a scenic snorkeler's sojourn. The Guam Daily Post 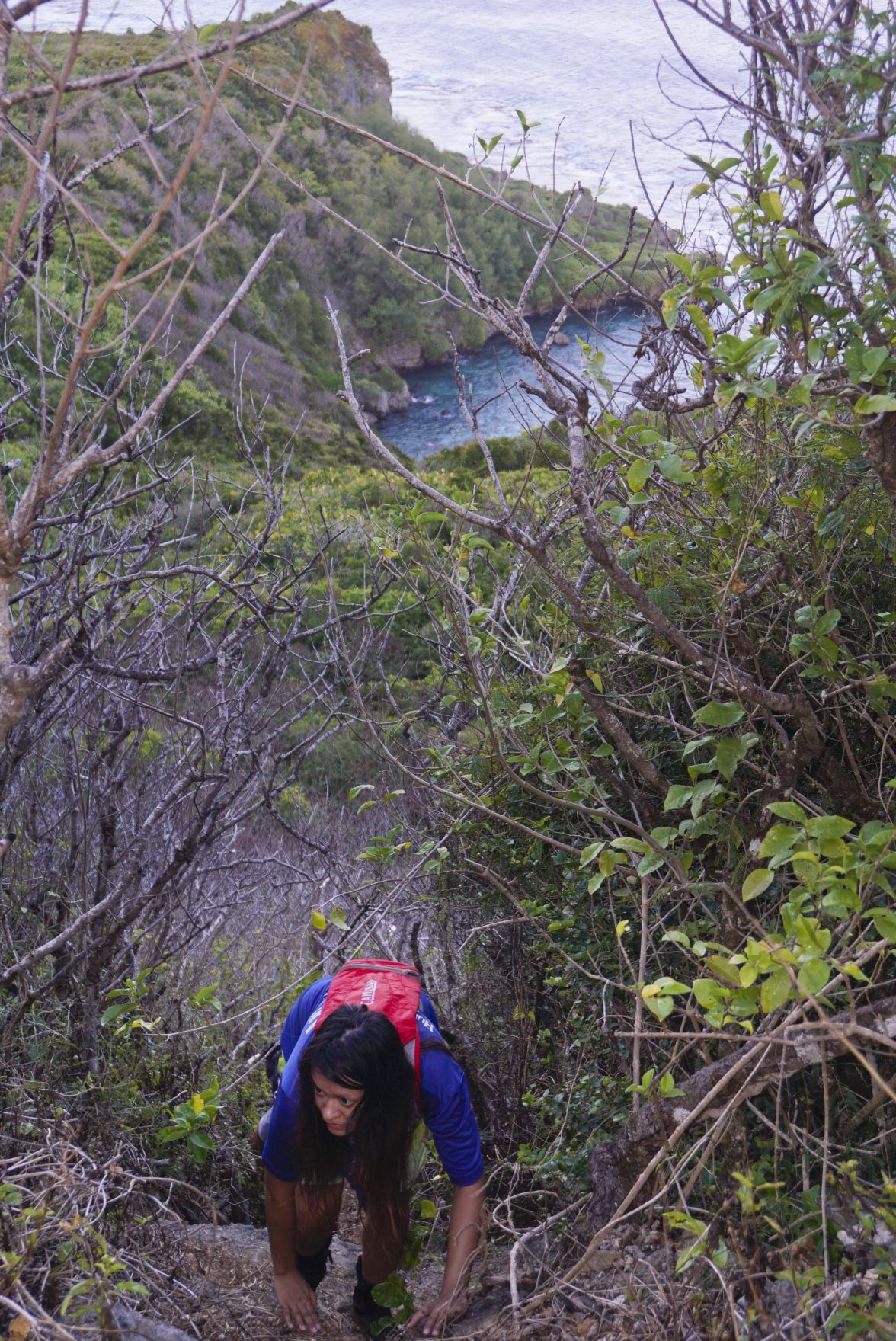 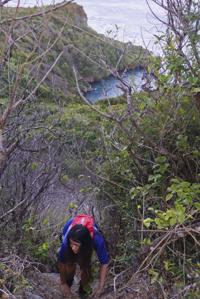 NOT FOR THE FAINT OF HEART: While the cove seems but a hop, skip and a jump away from the viewpoint, its warm, welcoming water won't come without a trying trek that tests physical ability and your instinctive navigating skills. The Guam Daily Post 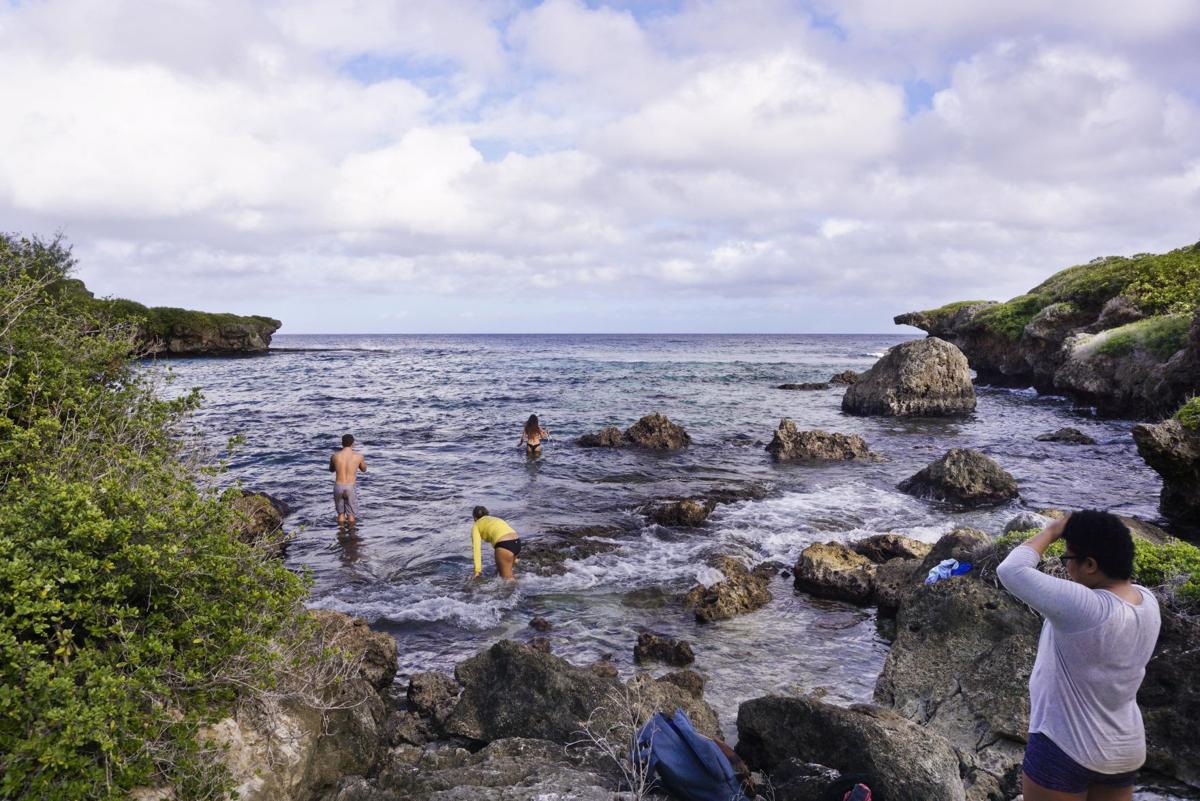 HAVE FUN, BUT BE SAFE: Observe weather and surf conditions at Fadi'an Cove before entering the water. The northeast coast is notorious for claiming lives. It's delightful waters can also be dangerous and deadly. The Guam Daily Post 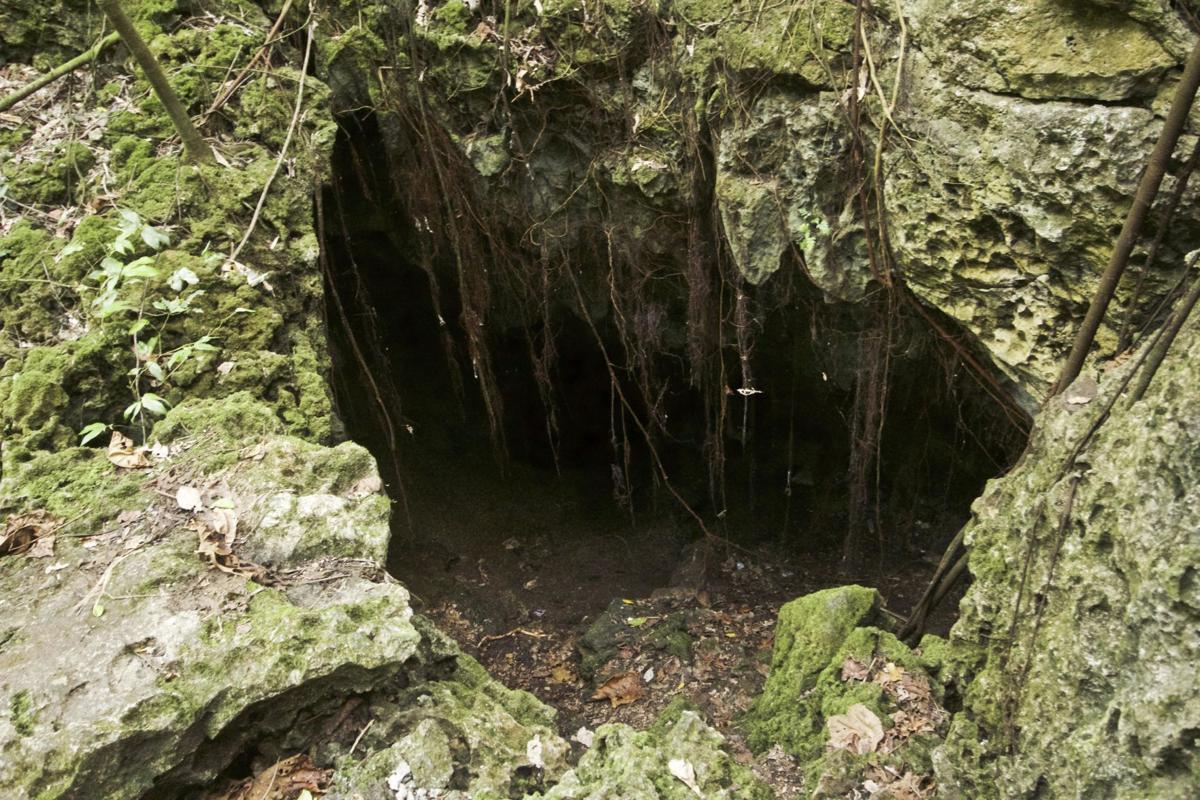 LET THERE BE LIGHT: Pågat Cave is pitch black inside and requires wading through waist-deep water. Bring flashlights or lamps, and tightly pack your belongings before venturing in. Post file photo 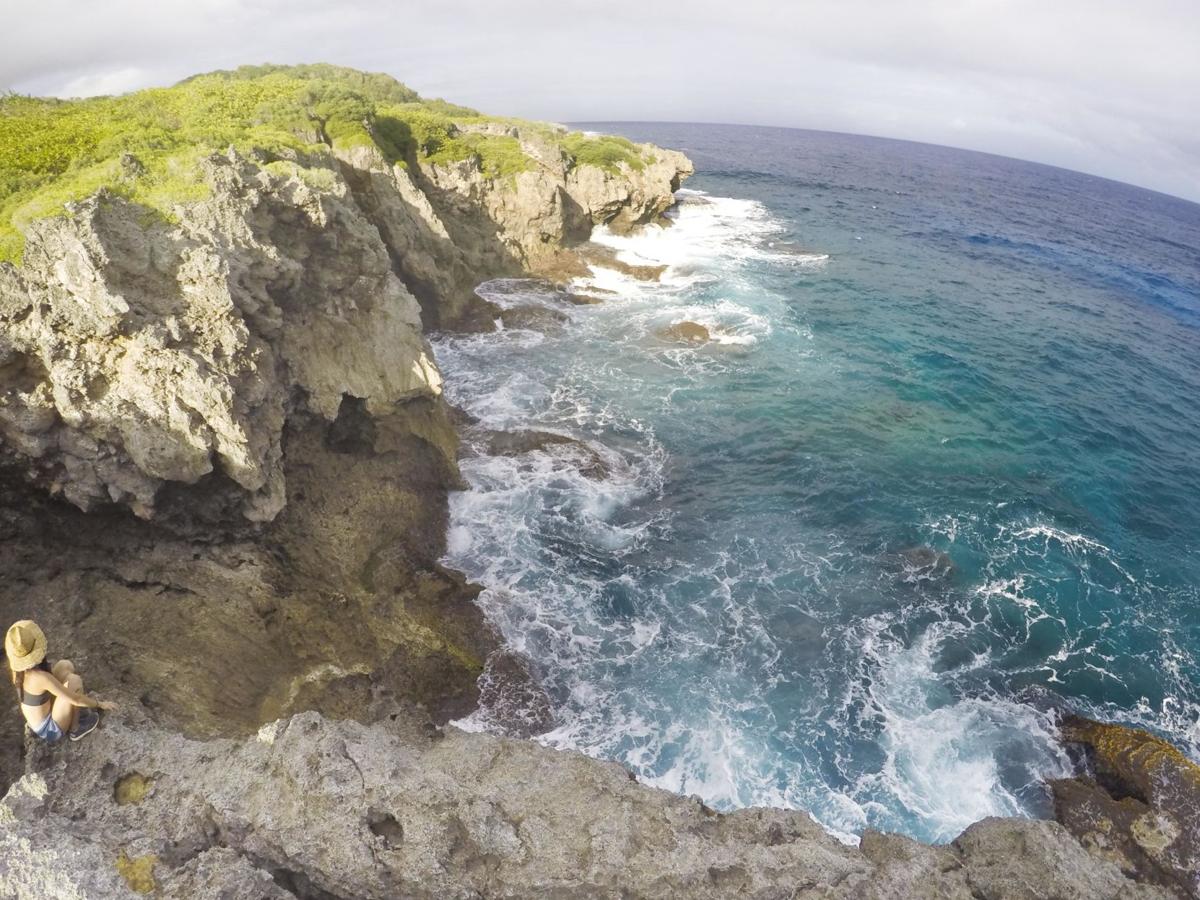 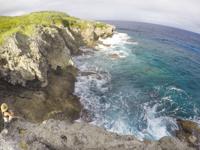 JAGGED JOURNEY: Cool coastal views of the deep blue Pacific Ocean are seen from the cliffs near Pågat. Feel free to venture anywhere along the jagged cliffs, but remember the entrance back into the nearby jungle. Post file photo 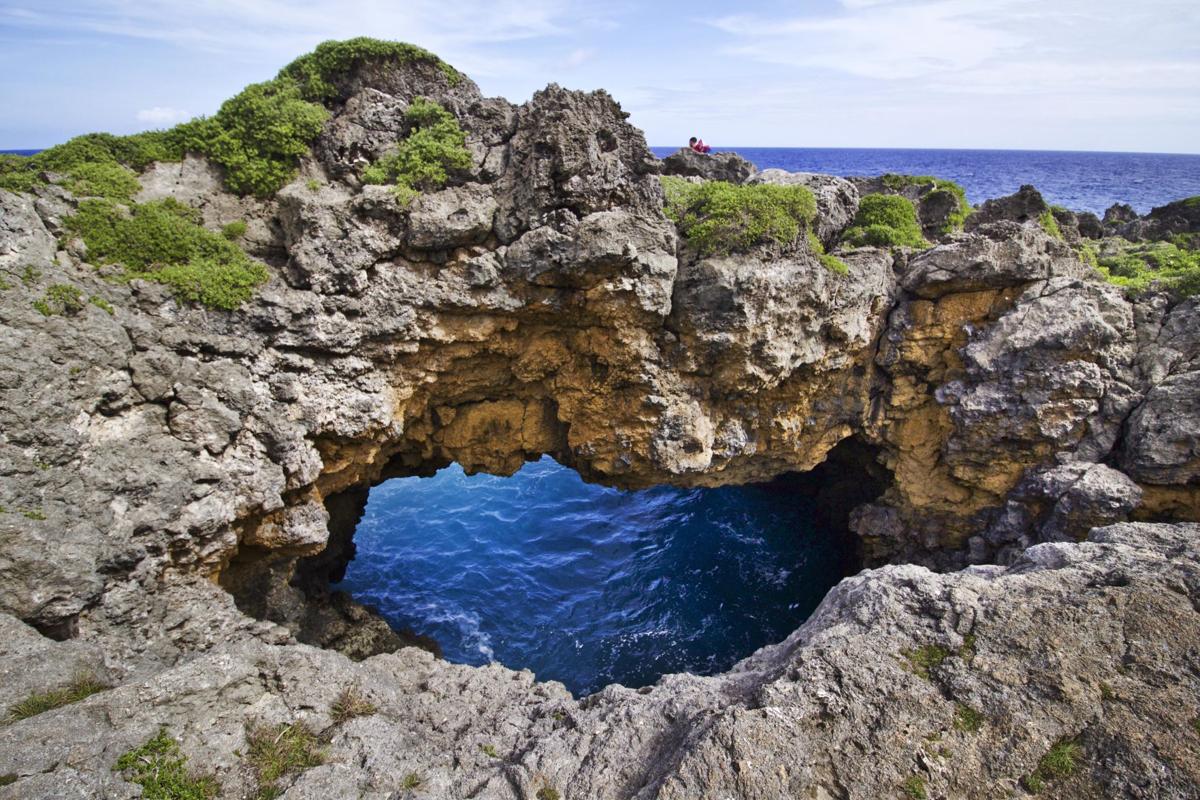 LIMESTONE LANDSCAPE: The first scenic sights of the coastal area at 1,000 Steps in Mangilao will naturally make you take your phone out. A blanket of tropical plants covers the limestone landscape. Tihu Lujan/The Guam Daily Post

NOT FOR THE FAINT OF HEART: While the cove seems but a hop, skip and a jump away from the viewpoint, its warm, welcoming water won't come without a trying trek that tests physical ability and your instinctive navigating skills. The Guam Daily Post

HAVE FUN, BUT BE SAFE: Observe weather and surf conditions at Fadi'an Cove before entering the water. The northeast coast is notorious for claiming lives. It's delightful waters can also be dangerous and deadly. The Guam Daily Post

JAGGED JOURNEY: Cool coastal views of the deep blue Pacific Ocean are seen from the cliffs near Pågat. Feel free to venture anywhere along the jagged cliffs, but remember the entrance back into the nearby jungle. Post file photo

Editor's Note: This is the third in a Spots on The Rock series exploring Guam's southwest, southeast, northwest and northeast coastlines.

There's a fierce battle ongoing between the land and the sea, and front-row seats are set in stone along the island's rocky northeast coast.

Watch the ocean's waves roll in and crash onto the battered, weather-beaten coastline, where a formidable, castle-like limestone fortress sends the water back into its blue depths after a good push and pull as old as time.

The hike along Guam's northeast coast encompasses steep descents down limestone cliffs, under the cover of jungle canopies, and culminates at the coast, near the sometimes-calm, sometimes-crazy Pacific Ocean.

Note: This hike is not contiguous and is separated into three distinct coastal treks, including 1,000 Steps (or Tagu'an Point), Fadi'an Cove and Pagåt in Mangilao.

• Pack enough snacks and water to keep healthy and hydrated.

• Internet and phone service is scarce and spotty in these areas. Make preparations and keep in mind options available in the event of emergencies.

• Check the National Weather Service website at www.prh.noaa.gov/guam and follow them on Facebook at @NWSGuam for weather updates and advisories. For up-to-date tide charts, visit www.tide-forecast.com/locations/Guam-Marianas/tides/latest.

• The weather and tide can change dramatically at any given time. Take shelter in inclement weather and avoid swimming or walking through water at high or hazardous tides.

• For more detailed directions, parking information and more on each destination, search the hike name at www.PostGuam.com.

Although a great beginner's hike, 1,000 Steps, also known as Tagu'an Point, is not ideal for pets or children due to sharp rocks and a generally hazardous coastline.

To start, find the dirt path just beyond the parking lot, which parallels an old fence and heads toward the ocean.

Note that the straightforward trail ahead will transition between a series of man-made staircases and concrete walkways, courtesy of the National Park Service.

Avail of the old handrails lining the staircases, but don't rely on them, due to their age. Also, take extreme caution when walking over the slick concrete walkways, especially when wet.

After 20 to 30 minutes of scaling the cliff, you'll come to the last and longest staircase, which curves as it descends toward the coastline.

At the bottom, you'll enter a brief spot of jungle. Follow the open-ended path as it winds toward the left, passing a large ironwood tree. Then, find the narrow trail to your right, lined by tropical plants, which will quickly let out to the coast. You made it!

To get back to your car, retrace your steps to the large ironwood tree close to the cliff line, and begin the ascent back up 1,000 Steps.

Due to the hiking path at Fadi'an Cove's tremendous transformation, and its less-traveled trail, it's recommended that you do this hike with someone familiar with the area.

Looking ahead, the hike entails climbing down a super-steep cliffside path over loose dirt and trekking over limestone boulders through dense jungle to land at a rocky beach with possibly hazardous surf. It's not at all safe for pets, kids or those with health conditions.

With the construction of the Gloria B. Nelson Public Service Building (Guam Power Authority/Guam Waterworks Authority headquarters) in Mangilao a few years ago, the trailhead of the original hiking path is lost.

That being the case, hikers will need to skirt the chain-link fence along the left side of the building, and even this comes with its challenges.

Leave the utility building's parking lot area behind and walk down Ignacio Road. At the bottom of the short hill, you'll see the fence nearby, to your right.

Tiptoeing around a small pigpen, make your way into the invasive tangantångan jungle beside the fence and trace the outskirts until it reconnects with an old, paved road.

Once you reach the abandoned road, near some dumpsters on the other side of the fence, the path will be more defined for a short while.

Follow the concrete path farther into the jungle, passing patches of whimsical wildflowers and something with less natural beauty, but all the more eye-catching – a gargantuan illegal dumping ground.

Continue to follow the littered trail as it transitions into a less beaten path. Avoid any meandering trails that look like they lead to nowhere. Stay on paths that lead left, toward a small hill.

Winding through a short jungle juncture, you'll reach the base of a semi-steep hill. Ascend the hill using any handholds available to reach the top.

After reaching the rocky summit, behold one of the island's most majestic million-dollar views: a lavish green-and-blue landscape that colors the northeast coast.

Move on to the next trial by finding the incredibly steep, loose dirt path that descends the cliff nearby, to your left.

With great attention and care, make your way down the tormenting trail. Use nearby branches and jutting rocks to assist your descent. Scoot down on your butt when necessary!

Once you've accomplished the treacherous trek, take a breather and enter the eerie limestone jungle ahead. This leg of the hike will be confusing, and you'll need to lean on your instinctive navigational skills to make it through.

The cove is less than 20 minutes away from this point, but you'll have to boonie stomp your way there. Do not rely on the countless colorful markers tied to trees. There's too many that often lead in conflicting directions.

Carefully hop across the limestone boulders in the direction of the ocean. From there, find sensible paths that head in that same direction. Closer to the bottom, the trail will become narrow.

A final set of colored flags – these you can trust – will lead the way to the cove through a tight jungle trail.

You'll fight a few branches guarding the cove before you finally make it, but eventually you will emerge triumphant at Fadi'an Cove.

After soaking in all the sea, salt and sun offered at Fadi'an, retrace your steps back up the cliff to get to your vehicle.

The trek to Pågat is on the more difficult end of the medium rating, especially if you decide to add on the optional portions, but it's worth every drop of sweat!

This hike is not ideal for pets or small children due to the deep water inside the cave, the generally rough, rugged landscape and close proximity to dangerous cliffs. Even for adults, extreme caution and preparation are encouraged.

To start, follow the beaten path as it heads toward the ocean.

Soon, the trail will slowly descend a jungle canopy-covered slope for the next 30 minutes, transforming from a dirt path to one of slick and slippery limestone, characteristic of northeastern Guam.

Near the end of the descent is the final test: a steep incline down sharp coral and moss-covered rocks. Carefully make your way down with the assistance of available ropes and other handholds.

After conquering the coral descent, about a mile into the hike, you'll reach home base. From here, there are three features to freely visit.

Going straight ahead will lead hikers through a brief spot of jungle before opening up to cool coastal views of the deep blue Pacific Ocean.

When you're tired of stumbling over rocks and baking in the sun, retreat to home base, and this time, take the other path to your right to reach the cave.

Descending another short limestone path into a depression, traverse a few minor coral rocks to reach the bottom.

To the left, you'll notice a couple of dark entrances, which lead to Pågat Cave. Note, the cave is pitch-black inside and requires wading in through waist-deep water. Bring flashlights or lamps, and tightly pack your belongings before venturing in.

When you're ready, slowly make your way into the cave lobby, entering the shallow pool of freshwater that opens up inside.

In just a minute, you should reach the main room of the cave, a cavern with dry ground to the left and a large natural swimming pool to the right.

Settle your belongings and set up some sort of lighting system for your temporary stay.

After cooling off in the underground oasis, head back out to the mouth of the cave for another two tantalizing treks.

Exiting the cave, to your left, climb another short limestone hill, which leads to another jungle path, covered by a cool, leafy canopy.

At the first fork in the trail, travel left, farther into the jungle. You'll reach the plateau of a hill. Continue to follow the beaten path for another few minutes.

Soon, another fork, divided by a tree, appears. This time, take a right. The peaceful jungle juncture eventually will lead to the site of one of the most well-preserved ancient CHamoru settlements on island.

At the end of this trail, you'll find several small latte stones, though they won't look like the ones branded across Guam tourism promotions. The signature stones stand upright and are mostly aligned, signifying the site of an ancient dwelling.

To reach the natural rock arch found only at Pågat, follow the same path past the latte stone site to another fork. Take a right, and follow it all the way to the breathtaking coastline.

Retrace your steps past the ancient village and underground cave to home base, and from there, back up the long, sloping hill to your vehicle.