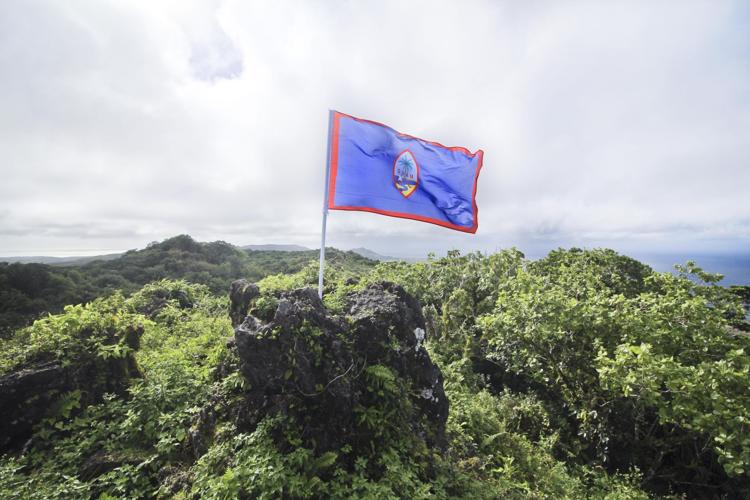 AT THE PEAK OF PARADISE: The Guam flag waves prominently at the peak of Mount Lamlam, Guam's tallest point at 1,332 feet. Post file photo 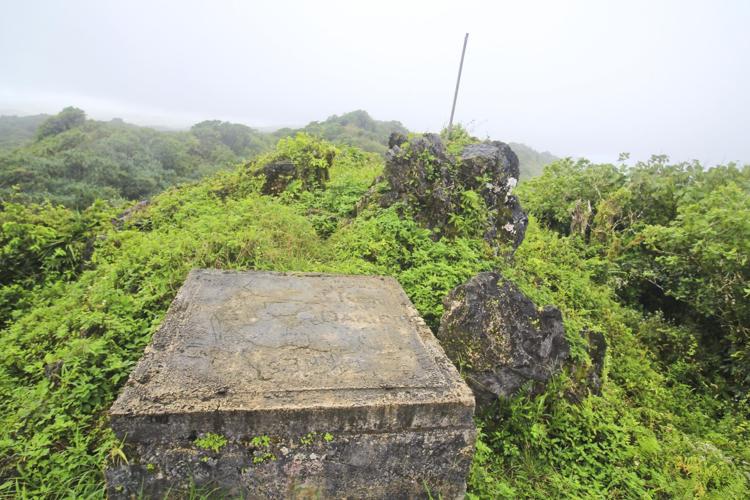 BEFORE: The peak of Mount Lamlam, Guam's highest point at 1,332 feet, is seen with a geographical survey marker and an old, rusted flag pole on Dec. 21. Tihu Lujan/The Guam Daily Post 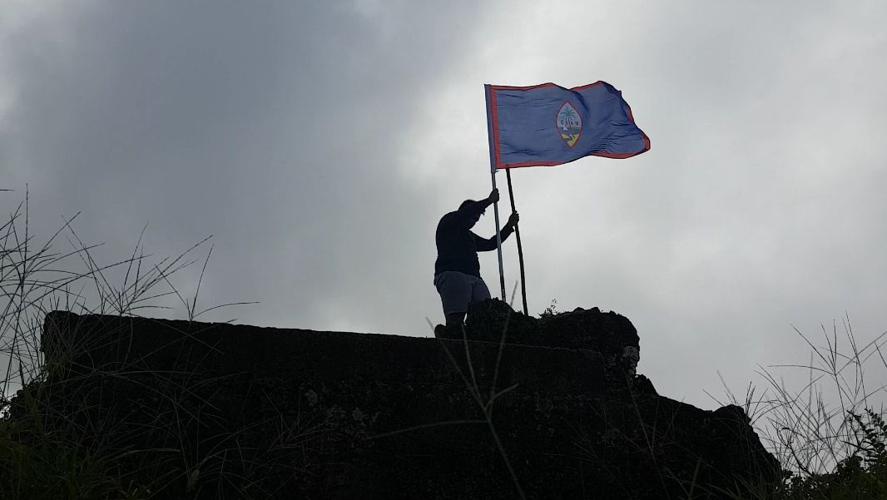 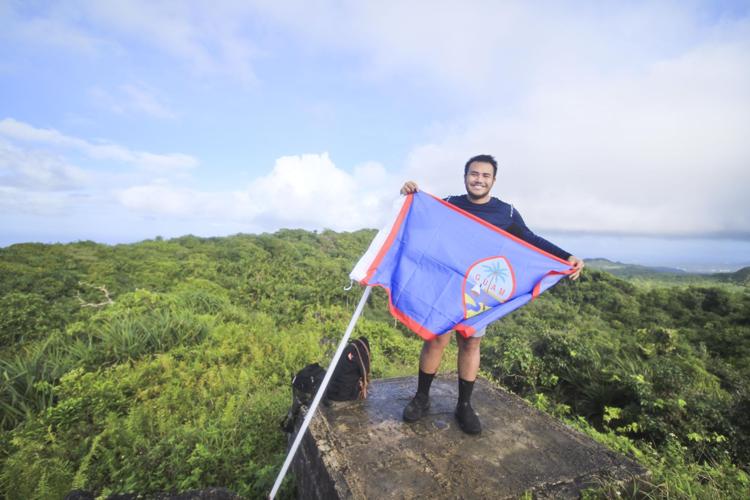 FOR GOD, FOR GUAM: Tihu Lujan poses with the Guam flag before planting it atop Mount Lamlam on Dec. 21. Tihu Lujan/The Guam Daily Post 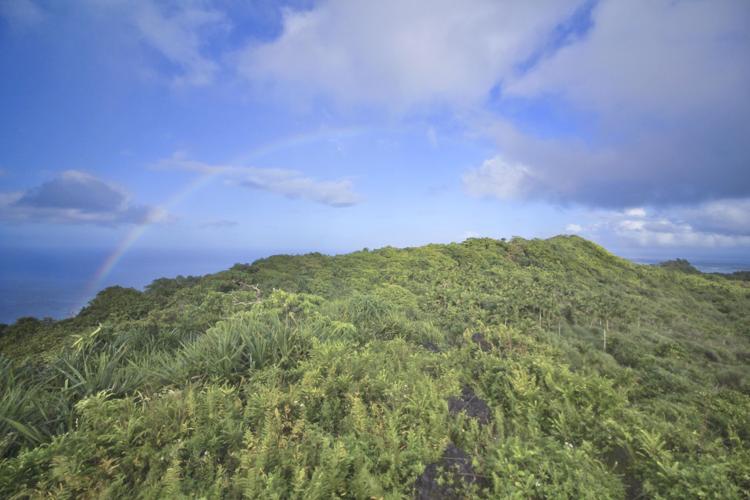 PROMISE OF PEACE: A rainbow appears over southern Guam, as seen from the peak of Mount Lamlam in Umatac. Post file photo 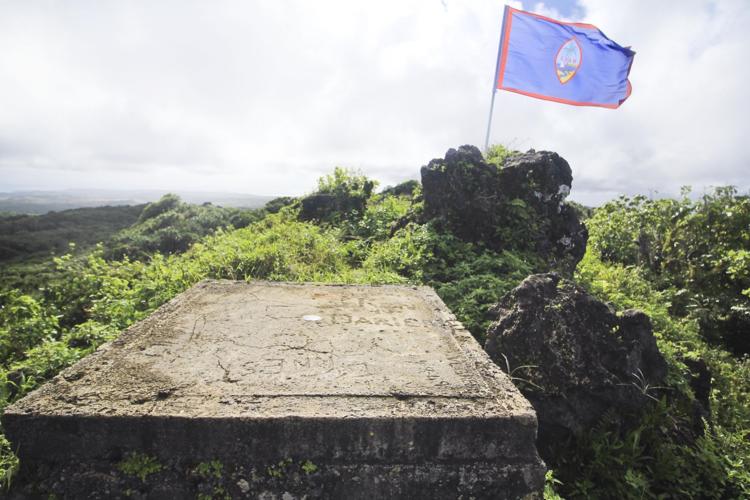 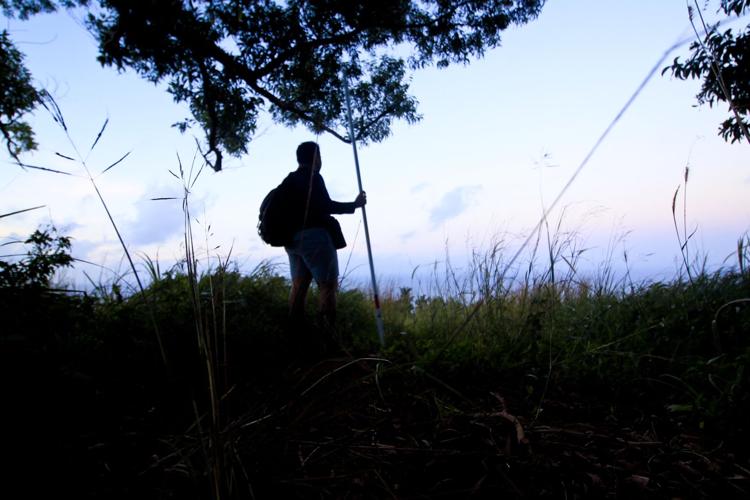 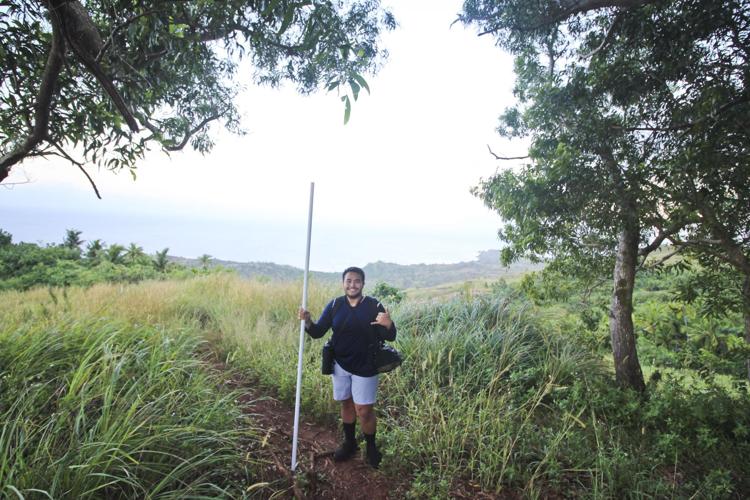 AT THE PEAK OF PARADISE: The Guam flag waves prominently at the peak of Mount Lamlam, Guam's tallest point at 1,332 feet. Post file photo

BEFORE: The peak of Mount Lamlam, Guam's highest point at 1,332 feet, is seen with a geographical survey marker and an old, rusted flag pole on Dec. 21. Tihu Lujan/The Guam Daily Post

FOR GOD, FOR GUAM: Tihu Lujan poses with the Guam flag before planting it atop Mount Lamlam on Dec. 21. Tihu Lujan/The Guam Daily Post

PROMISE OF PEACE: A rainbow appears over southern Guam, as seen from the peak of Mount Lamlam in Umatac. Post file photo

Greetings Guam, from the highest peak on island!

The date is Dec. 21, 2017, and I write this to you from the peak of Mount Lamlam, Guam's tallest mountain, and if measured from the bottom of the nearby Marianas Trench – the world's tallest!

Let me be quick to clarify the confusion between Mount Lamlam and nearby Mount Jumullong Manglo.

Mount Jumullong Manglo is the mountain most island residents are familiar with, adorned with dozens of wooden crosses and an especially large concrete one. We hike up this mountain annually in observance of Good Friday every March.

Mount Lamlam, on the other hand, is the sister mountain just down the range from Jumullong Manglo, and is actually the island's highest peak.

According to oral tradition, when Guam's Catholic faithful first began the tradition of making a pilgrimage up the mountain, Mount Jumullong Manglo was much easier to reach and provided more flattened landmass than Lamlam. However, Lamlam has always been the tallest.

It was just easier to settle for Guam's second-tallest peak than to make the extra difficult journey to Lamlam's limestone peak another mile down the range.

However, for an avid hiker like myself, ascending Mount Lamlam was a task and bucket-list item that fit the Spots bill and needed to be accomplished before 2017 ended because, well, it's been a pretty lame year, at least for me.

A few weeks ago, I started learning as much as I could about Lamlam and the hike in order to not get lost and to be aware of any hazards.

Through my research, I found that for many years, a U.S. flag adorned the mountaintop. Photos I saw showed the American flag had been flying proudly on Guam's tallest peak since the late 2000s, and perhaps even earlier.

It was an interesting tidbit to the hike, but I wondered if there had ever been a Guam flag planted atop the peak. I failed to find any photos of Guam flags, nor had I heard or read of any past Guam flag plantings. It seemed odd that a U.S. flag would fly over the island in place of the actual island's flag.

I don't say this out of anti-American sentiment or CHamoru advocacy at all, but this is Guam. Our flag should fly over our island.

If there's anything I wanted to accomplish before the year ended, it was climbing our island's tallest peak to plant our island's flag, and yesterday, I did it!

Without any knowledge of how the peak looked in person, I decided to take up a new flagpole along with the Guam flag.

So, with my camera bag, hiking bag and hydro flasks, I carried an extra 30 to 40 pounds with me up the mountain. No biggie.

The hike started around 6 a.m., along the same path to Mount Jumullong Manglo. With everything I had on me, it felt as if I was carrying my own cross!

Even just after climbing the initial hill, I seriously questioned my ability to move forward.

After taking a brief break at the first of 14 Stations of the Cross, I reminded myself that the deed was "for God and for Guam." I whispered that to myself at every Station of the Cross afterward.

With God as my guide and the island I love serving as inspiration, I powered through and managed to reach the final fork between Lamlam and Jumullong Manglo.

Ecstatic, I took the left, as the right leads to the crosses. After a couple of steps in the wrong direction, I soon entered a thick jungle filled with vibrant green, moss-covered limestone rocks and a grove of pandanus trees. It was an enchanting experience to walk atop the mountain range, a place like no other.

Monarch butterflies, a rare sight on Guam, fluttered freely from flower to flower. The flowers, too, grew in such diversity and to surprising sizes. There were orchids the size of a full grown man's fist. This is what the top of the world looks like!

Midway through the jungle, however, the dreamy landscape slipped into an ominous vibe. I started to feel eyes on me, but that's typical of being in remote areas around the island.

Up high in the mountains, I wouldn't have expected to be crossing through ancient CHamoru settlements, but our ancestors' spirits roam the entire island I suppose.

The spirits, as I accepted, did not feel malicious, but rather suspicious. As I was carrying a large white pole and several bags into the isolated jungle, I couldn't blame them.

Soon I stumbled my way up a steep limestone hillside, to what I hoped would finally be the peak of Mount Lamlam. To my excitement, it was!

As I stepped foot onto the peak, the clouds, which seemed within reach at this point, showered down unmercifully.

Without any cover, I tried my best to shield my belongings, laughing through the rain. Was it just a wet welcome, or a sinister sign? I didn't dwell on it, especially since I was reassured by an incredible, full rainbow after just a minute of downpour.

Gazing across Guam, I enjoyed sweeping views of much of the island. You can definitely see more atop Jumullong Manglo, but even at Lamlam you can see all of Orote Point and Sumay to the west, Umatac's Sella and Cetti Bay to the south, Pago Bay and all of Yona and Mangilao to the east, and parts of Harmon, Tumon and Barrigada to the north.

You can even see parts of Fena Lake (but don't tell the military that).

Before starting the hour-and-a-half journey, I wondered what it would feel like to be on top of the island/world. It was a moment of ecstasy when I finally reached the top, but perhaps out of relief at the journey's end. I was simply amazed by the views, but who wouldn't be? No matter, I definitely felt on top of the world!

Atop the Lamlam peak is a large cube of concrete that sports a "Guam Geodetic Triangulation Net" structure, which is essentially a geographical survey marker.

There was also an old, rusted flagpole, but the last U.S. flag that has probably been replaced throughout the years is probably long gone by now.

Without much fanfare from the jungle audience around me, I replaced the old pole with my new one and strung on a new Guam flag, which currently wavers over the island from its highest peak.

As I wrap up writing from the mountaintop, I've been drenched and naturally dried five different times. I've seen two distinct, robust rainbows spread across the island. There have also been several shrouds of fog forming through the valleys.

Simply amazing, but that's just Guam – and that's life, too. It's why I decided to lug up a new flag and pole to our highest peak.

I love this island and all its furnishings. From its developed areas to its unspoiled depths, Guam has been abundantly blessed by God. We've always had all we need to live happily and in good health. What more could we ask for?

I've been so fortunate to have had the opportunities and abilities to explore what we have and share it with the community. It's something I always hope to do!

Additionally, it's always my greatest hope that when we're hiking across Guam, we remember to preserve our blessings for the future, and not necessarily just for future generations, but because these blessings are ours.

Or, in English: "I offer myself to protect and to defend ... the water and the land of the CHamoru, which are our inherent God-given rights. This I will affirm by the holy words and our banner, the flag of Guåhan."

I hope you do, too. Magof Nochebuena and Merry Christmas!