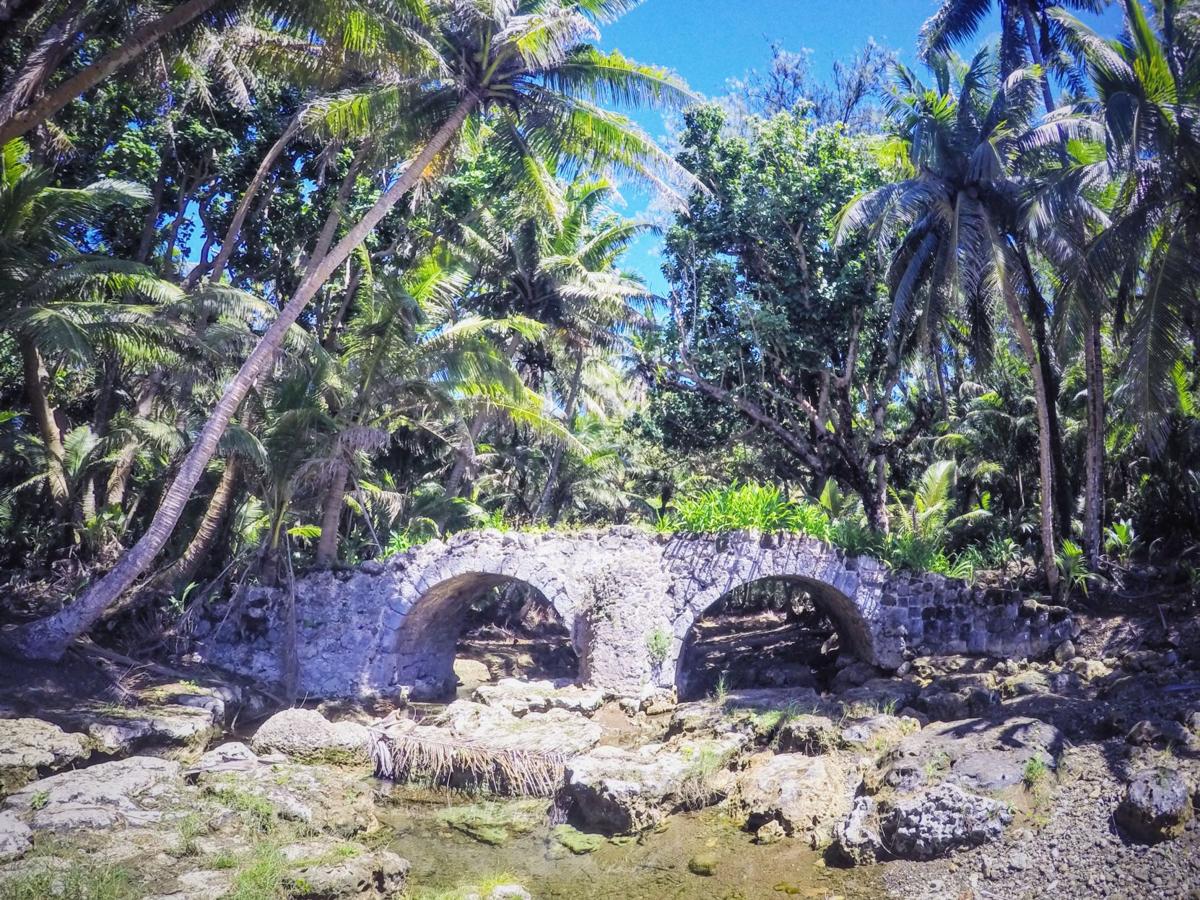 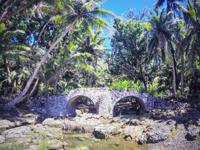 SPANISH BRIDGE: A remnant of the Spanish era on Guam, this bridge located at the base of the Sella Bay trail is more than 300 years old and was constructed by the Spanish in the 16th century as part of El Camino Real. This main Spanish roadway connected the Spanish port of Umatac to the seat of government in Hagåtña through the southwestern coastline. To the north of Sella Bay in the nearby jungle also lie remnants of an ancient CHamoru settlement, which include latte stone segments and a Spanish-era oven. The site was listed on the National Register of Historic Places in 1974 as an archaeological site. The Guam Daily Post 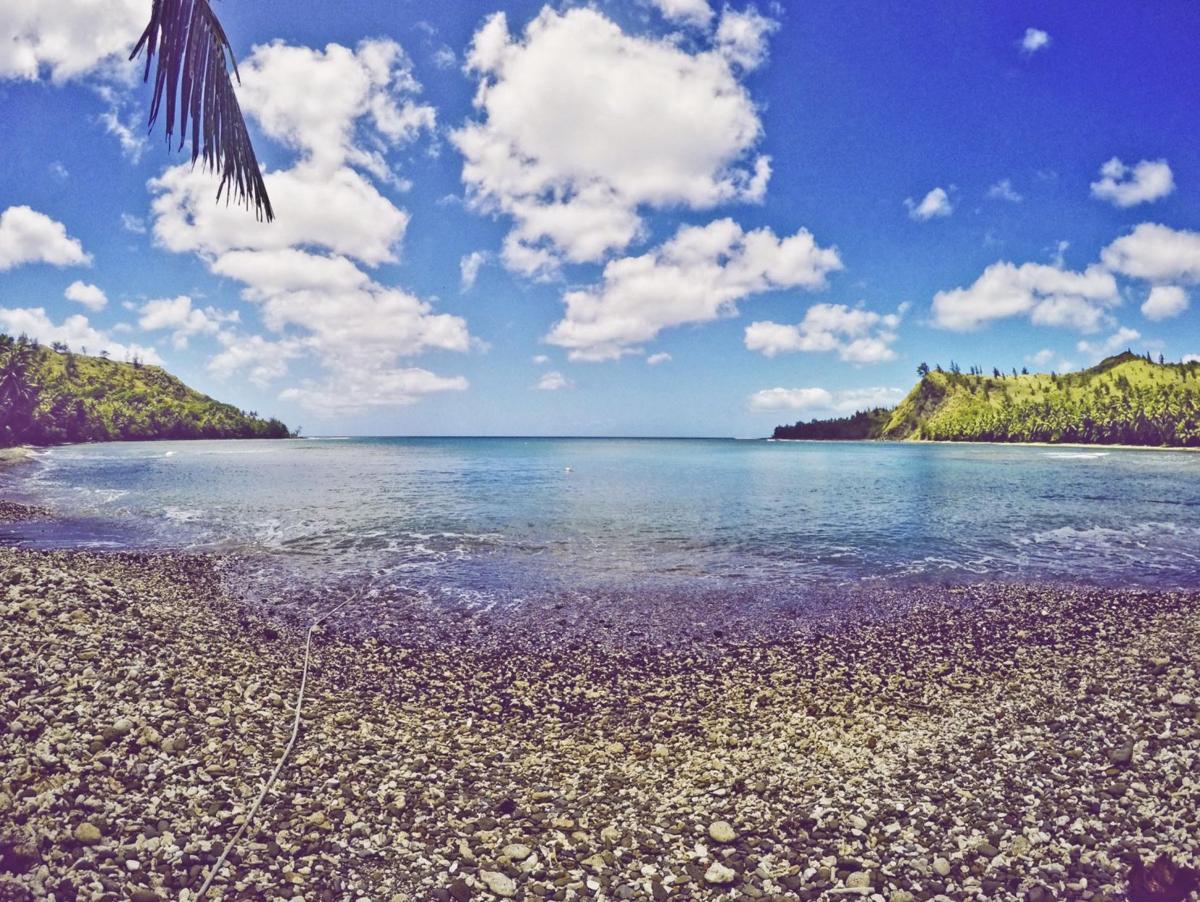 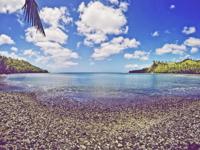 HIKE INTO HISTORY: Remnants of ancient CHamoru latte stones and pottery remain scattered around Cetti Bay and Sella Bay. They offer a look at the historical past of the coastal area previously settled for about 3,000 years before Spanish conquests of the island in the 16th century. The Guam Daily Post 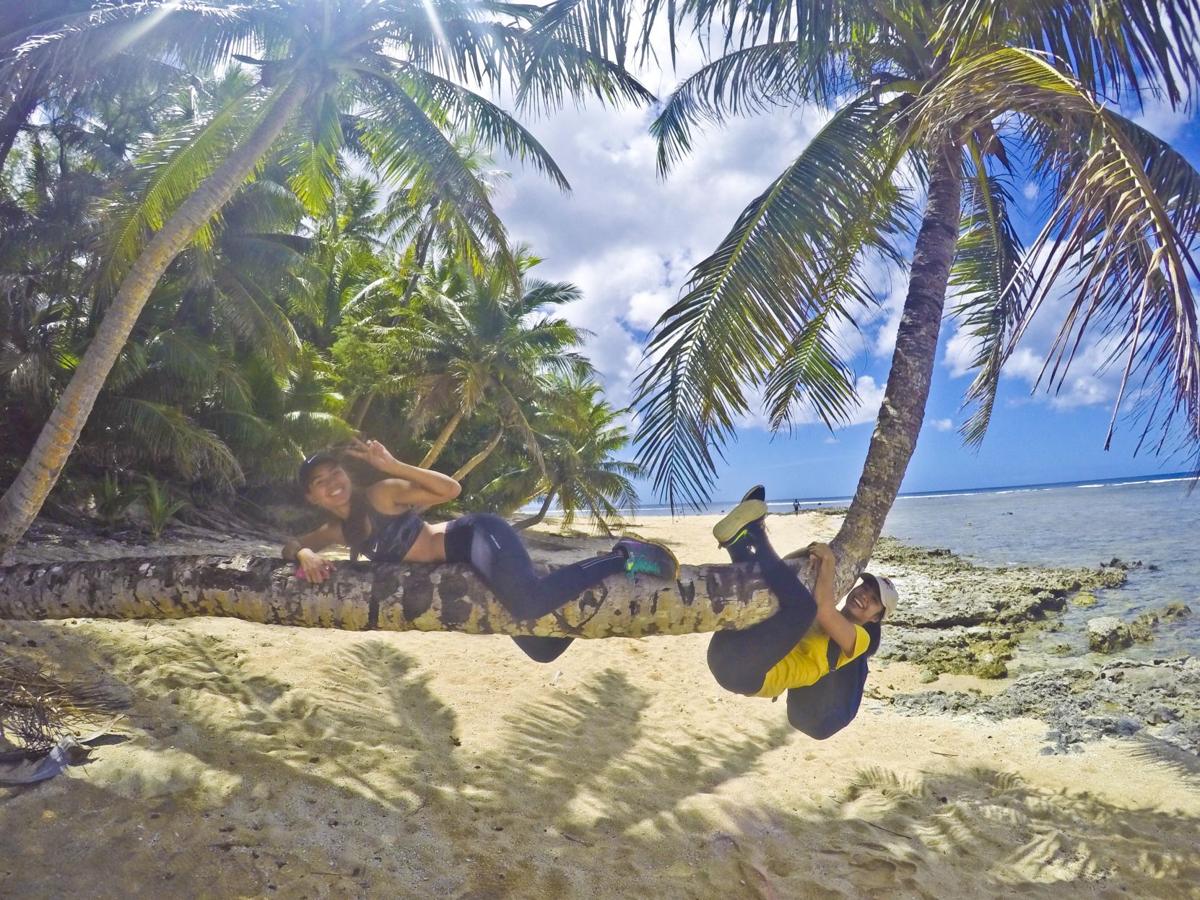 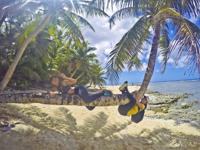 GYMNASTIC FUN: One of the many uniquely shaped coconut trees along the Sella Bay to Cetti Bay beach walk presents the opportunity for some gymnastic fun! Stop by for a short rest underneath the shade and for some cool pictures, too. The Guam Daily Post 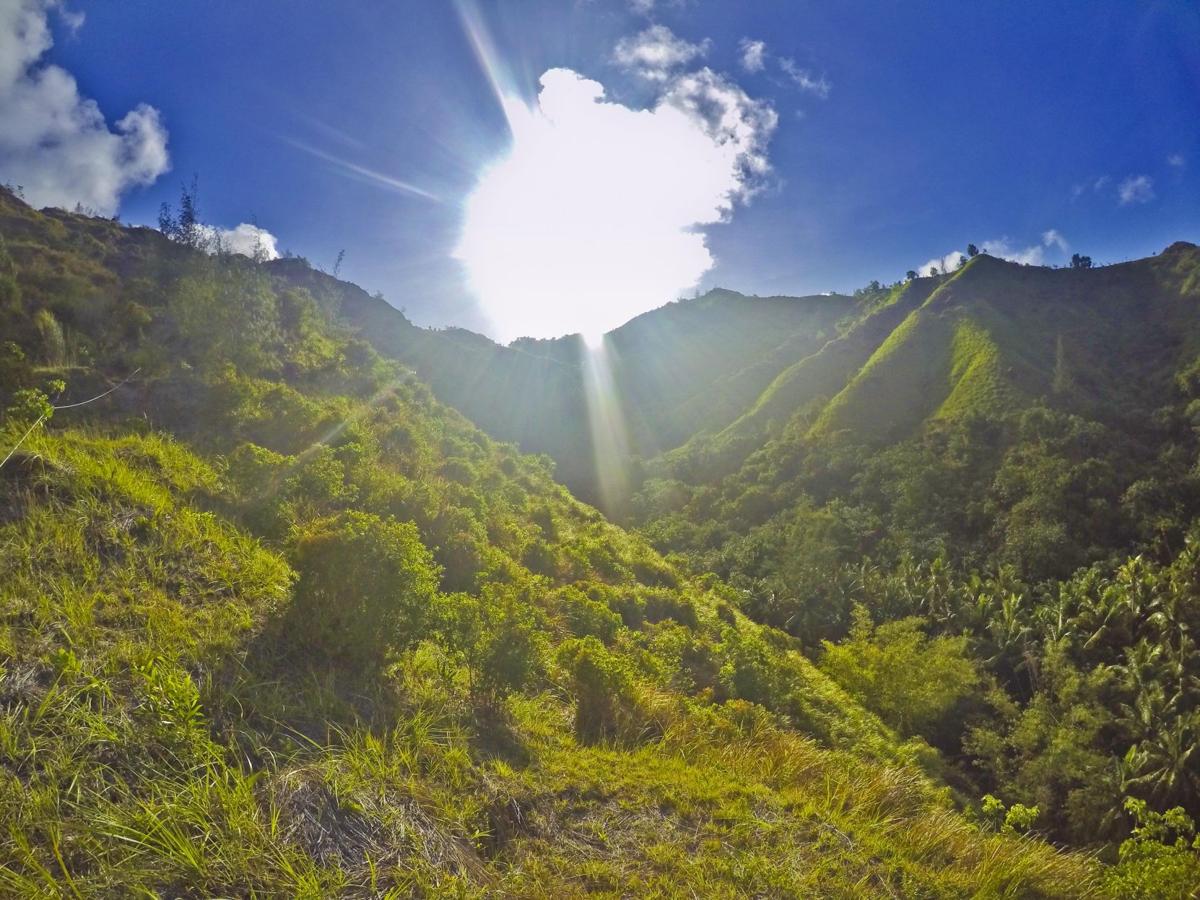 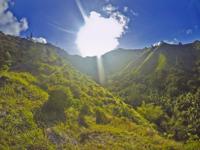 SOUTHERN MOUNTAINS: The slopes of the southern foothills are covered with grassland, savanna, coconut trees and jungle flora – as seen here from along the trek to the southwestern coastline of Sella and Cetti bays. They also hide the secret Cetti Waterfalls, another Guam hike that contains seven different waterfalls that cascade down the hills backing the bay. This southwestern area is on the Guam and National Registers of Historic Places. The Guam Daily Post 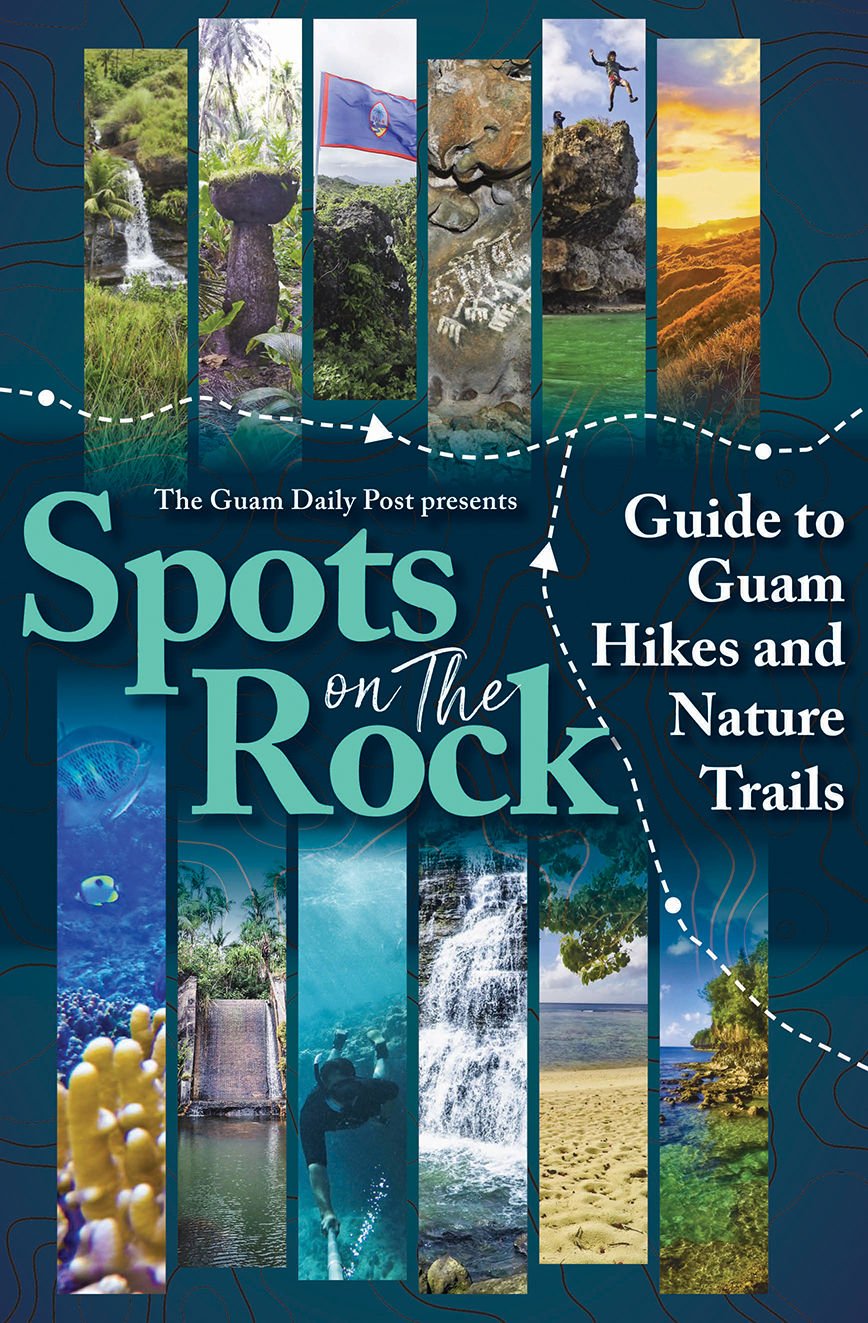 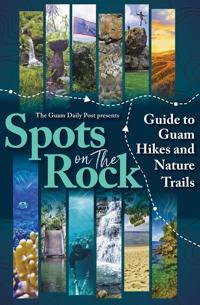 SOUTHERN MOUNTAINS: The slopes of the southern foothills are covered with grassland, savanna, coconut trees and jungle flora – as seen here from along the trek to the southwestern coastline of Sella and Cetti bays. They also hide the secret Cetti Waterfalls, another Guam hike that contains seven different waterfalls that cascade down the hills backing the bay. This southwestern area is on the Guam and National Registers of Historic Places. The Guam Daily Post

Hiking on Guam frequently takes visitors into the remote and most pristine areas of the island, often exposing ancient cultural sites, historically significant sites, and various breathtaking landscapes. It is my duty as a resident of Guam to respect and protect the land, the water, and all things natural to my island. I will not litter, graffiti, or damage these spots on the rock. I will leave nothing but footprints and take only memories.

Take a trek down to two southwestern bays in Umatac this weekend, exploring several delights of southern Guam's Territorial Seashore Park, which also is listed on the Guam and National Registers of Historic Places. The park includes sweeping views of the southern mountains and foothills, a 300-year-old Spanish bridge, isolated beaches and snorkeling fun.

A lengthier hike than usual, this weekend's hike is filled with history, jungle adventure and long walks on the beach. The trail down to Sella Bay and then over to Cetti Bay covers a lot of ground, both in distance and in types of terrain.

With the trailhead located not too far from Mount Lam Lam, northern residents will have to travel southbound toward Umatac – passing Naval Base Guam, the Agat Small Boat Marina, and the Old Spanish Bridge Market – and proceed up and along the southern mountains.

After going up the large and winding hill leaving Agat, there will be a turn off Route 2 on the right-hand side into the Sella Bay Overlook. Turn in and park here.

Be sure not to confuse the turning point with the Cetti Bay Overlook, which is located less than a mile down the road adjacent to Mount Lam Lam.

For southern residents traveling northbound through Merizo or Umatac, the turn into the Sella Bay Overlook will be on the left-hand side, just half a mile after passing Mount Lam Lam and the Cetti Bay Overlook.

An overview before you start

Before beginning your hike, you might be interested in taking a gander of the journey ahead. Take a short walk up the nearby staircase to get to the overlook for a glimpse of Sella Bay. Overgrown vegetation might prevent any sort of "overlook" at all, but you might want to check it out anyway. If the tangantangan has been cut back, you'll be able to see all the way down the hillsides to the sea.

To start the hourlong trek down to the bay, walk back down the staircase and follow the surrounding signs to the Sella Bay Trailhead, an obvious path just a few feet to the left of the stairs.

For the entirety of this hike you will be traveling downward toward the bay, which is visible for most of the way as your mark. You'll also get great views of the rugged southwestern coastline.

For the most part, much of the first half of the hike is self-explanatory with a single path to follow. Be aware of the pink, yellow or orange hiking tags adorning trees to keep you on track.

Descending slope after slope, the path will begin to widen and you will soon cross one of two small streams.

Cross over and continue the hike, following the set path over a few more hills. At this point the trail may widen even more and branch off into different paths.

Again, be sure to keep an eye out for brightly colored tapes signifying that you are going in the right direction and remember to head in the direction of the bay at all times.

After traveling through open area for some time, you will soon come across a second stream, which will likely be a little harder to cross as the stream is both wider and deeper than the last. Use the rocks popping above the water to safely scramble across.

You'll know you're close to the bay, about five minutes or so away, once you enter thick jungle.

The hiking path basically disappears once you're in the jungle, which seems vast at its entrance, but, rest assured, the Spanish bridge and Sella Bay shoreline are just a few feet away.

In the jungle, you'll have to rely on finding and following the colored markers among the trees. You should also be able to quickly hear and find the Sella River, which leads to the bridge and bay.

Follow the path along the river to reach its mouth and the hike's destination. You made it!

Take a break at the Spanish bridge, which is over three centuries old. It was part of the Spanish "El Camino Real," meaning The Royal Road or the King's Highway, which connected the Spanish port settlement in Umatac to its seat of government in Hagåtña.

A weathered yet completely sturdy structure, the bridge has withstood centuries of typhoons and the brunt of time, so take a moment to take it in. Better yet, snap a cool picture on top of it! From the sides of the river there are paths to get atop the bridge, so be sure to take advantage.

After taking some time to explore the bridge and surrounding Sella Bay, consider making the extended trek to CettiBay.

An optional part of the hike, it's quite literally a long walk on flat beach down to the other bay for about another half-hour.

You might ask, "Well, why would I want to extend my hike just to see another bay?" The answer: Since you've already hiked all the way down the hills and are exploring the isolated southwestern coast, why not? You might as well see all you can.

Also, Cetti Bay is not just like any other bay. In fact, it's considered one of Guam's most remote and beautiful bays. It's also great for snorkeling without having to go too far out into open water.

Along the way there are unique rock formations on the shore, oddly shaped coconut trees great for hanging around and plenty of sandy beach crustaceans to keep you company.

To reach Cetti Bay, simply turn left at the Spanish Bridge and follow the beach south for about 1-1/2 miles or 20 to 30 minutes. As you walk, you'll even catch sight of Cocos Island in the distance.

Cetti Bay, wide and welcoming, will be visible after a sharp curve along the beach.

You can either set up camp here along the side of the bay or continue farther to the center if you want to get a different vantage point of this picturesque marvel.

The best part about swimming in the bay is that you can get the best of open-ocean snorkeling within a few feet of the shore.

Be sure to take a dip here, even if you don't snorkel, before making the 5-mile trek back along the beach and up the hills.

To return to your car, retrace your steps along the beach back to Sella Bay, through the jungle and up the numerous sloping foothills to end your day's adventure.