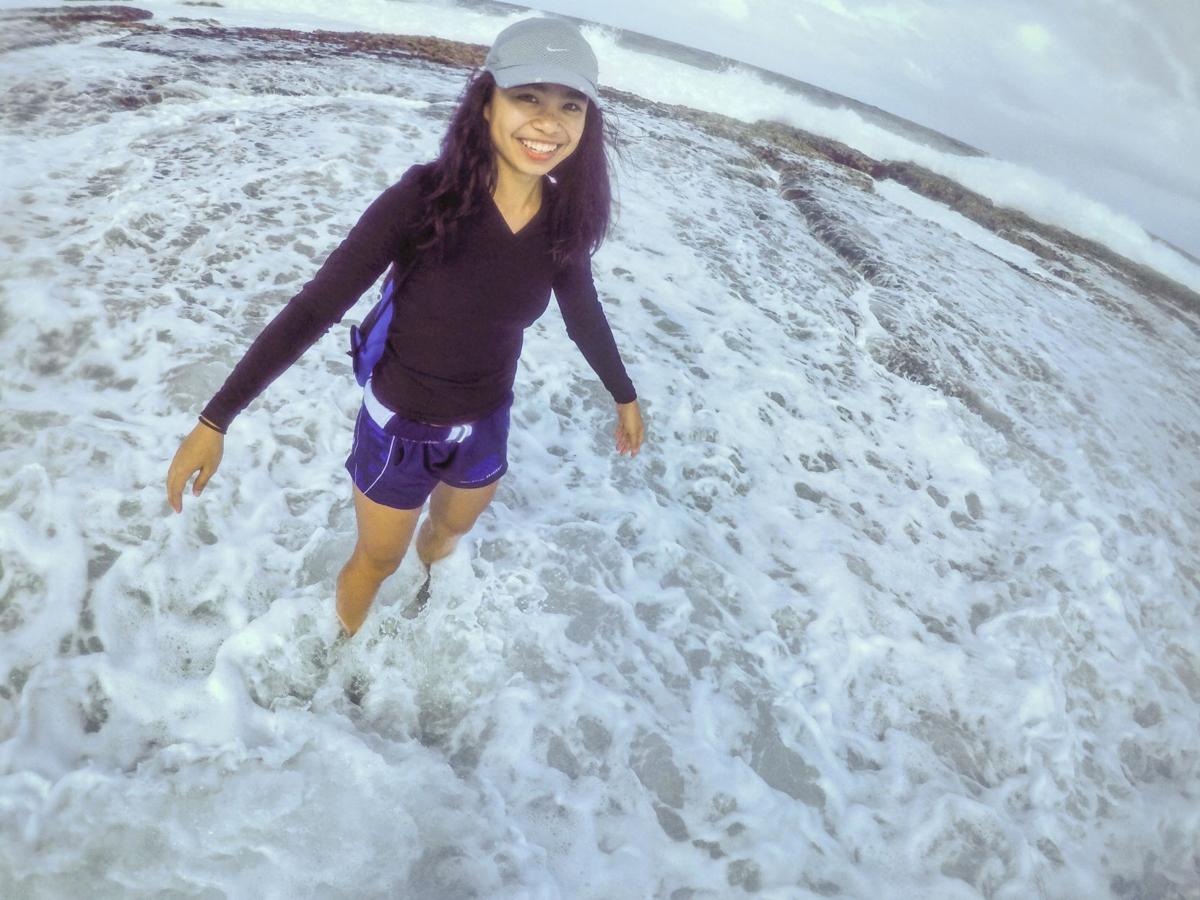 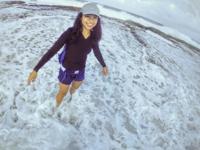 ON THE EDGE: Michaela Sablan walks out to the reef's edge, near Taga'chang Beach in Yona, to explore several shallow caverns that are clear enough to see schools of colorful fish, coral and anemones. Tihu Lujan/The Guam Daily Post 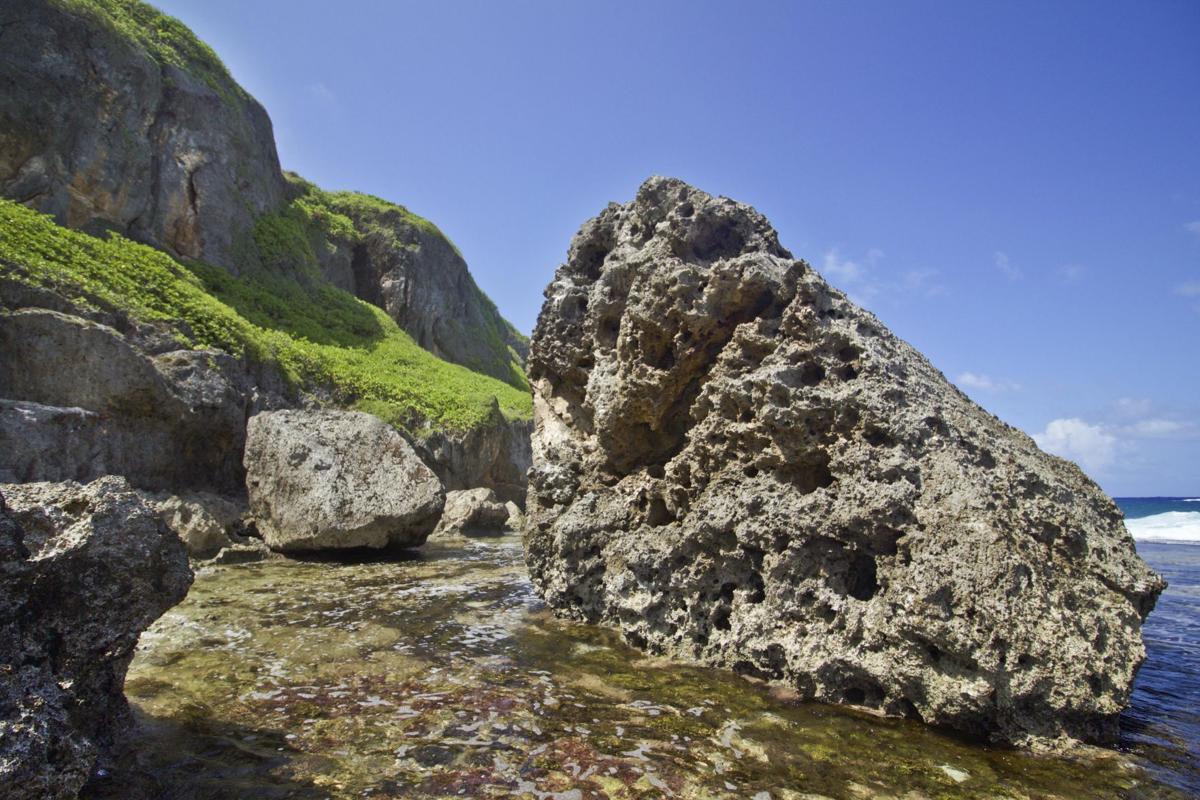 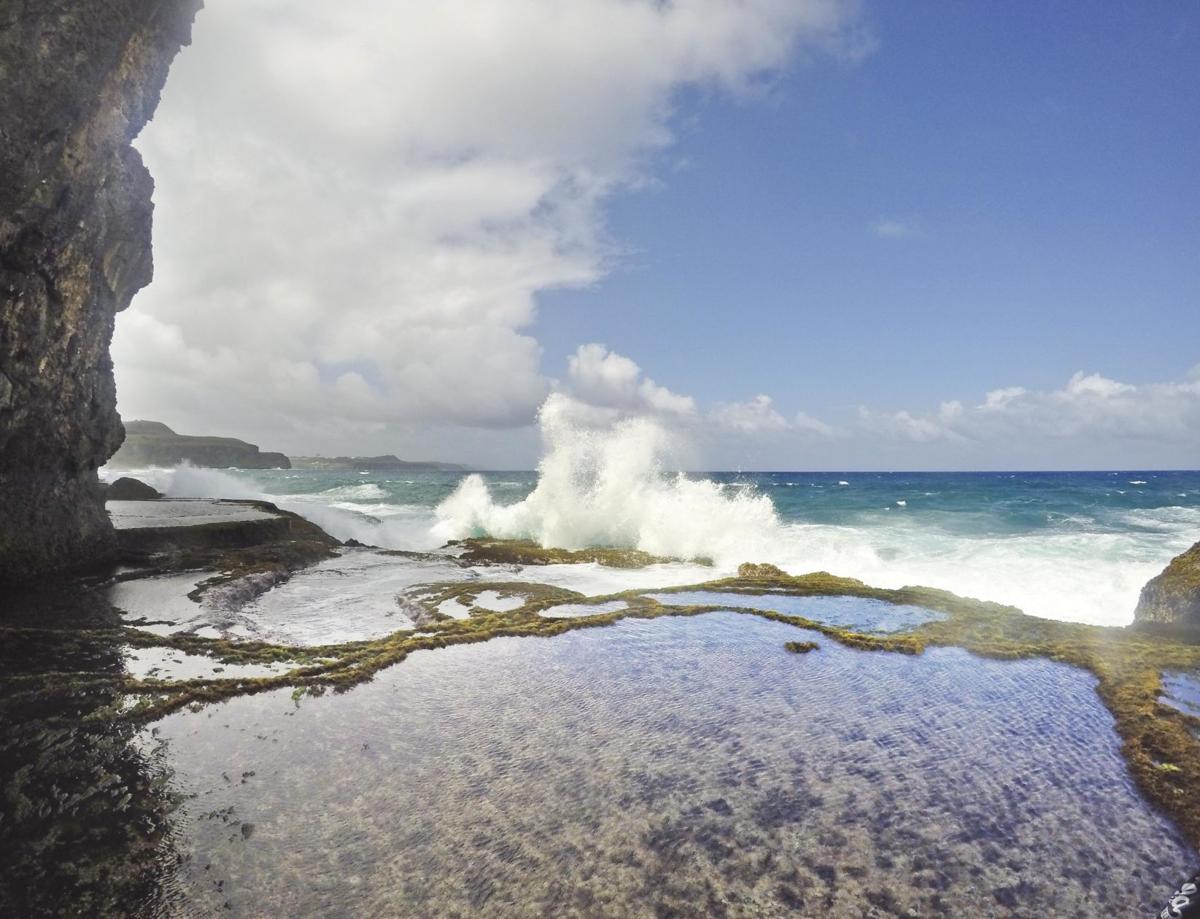 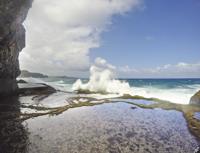 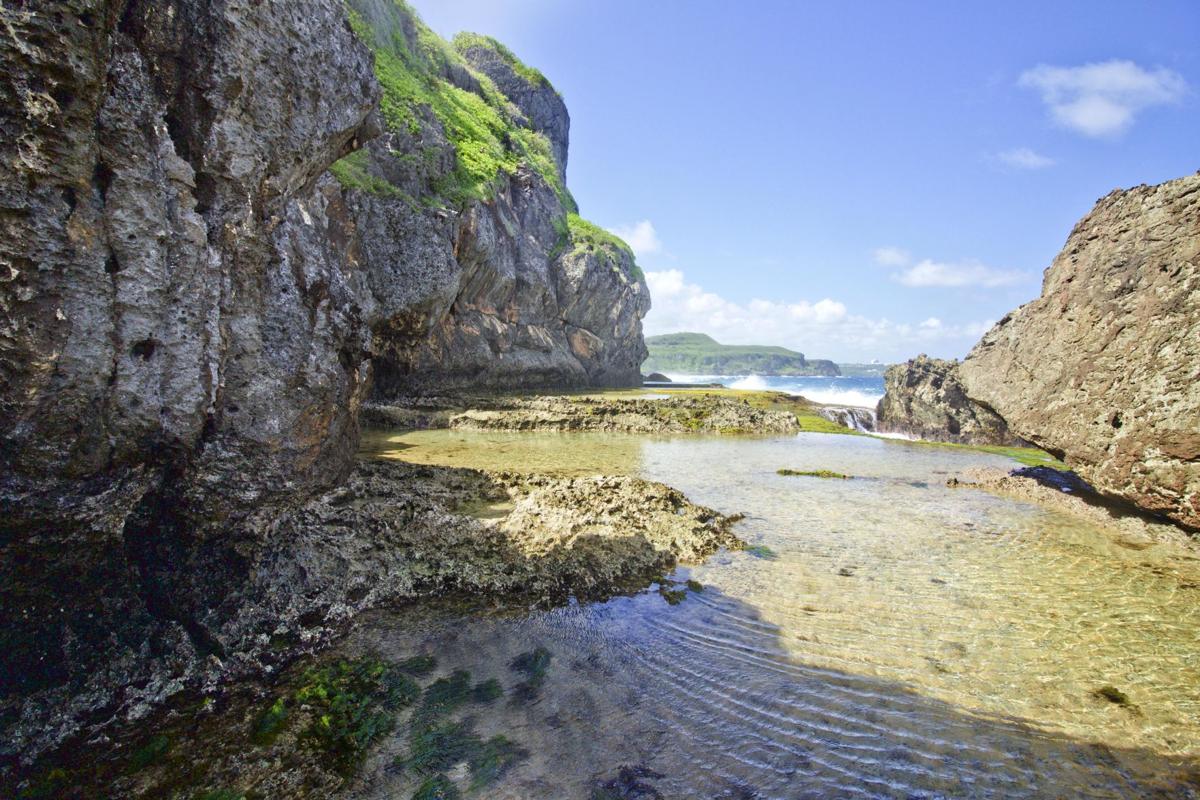 YOURS TO EXPLORE: The island's southeast coast is home to dozens of fascinating limestone formations, seas of seaweed and coastal creatures. Tihu Lujan/The Guam Daily Post 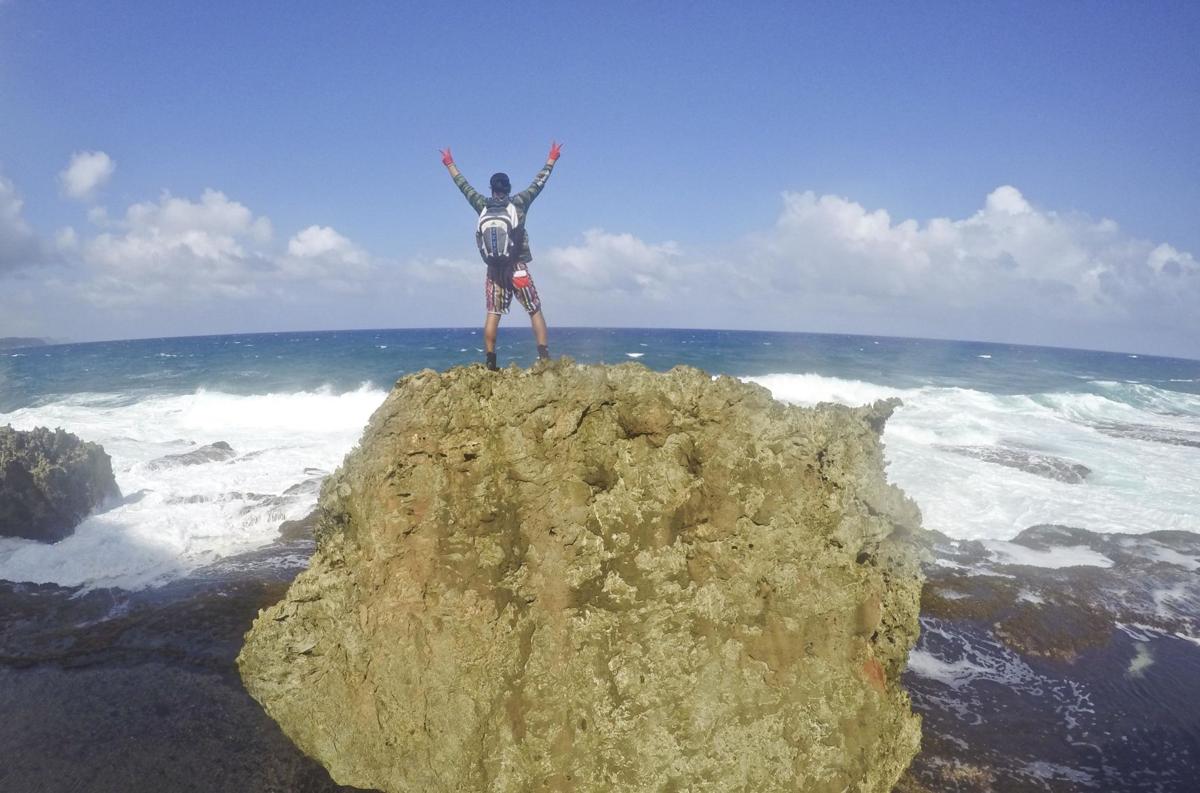 EYES ON THE HORIZON: Paolo Cruz poses atop one of the dozens of fascinating limestone formations seen along the coastline between Turtle Cove and Taga'chang Beach in Yona. Tihu Lujan/The Guam Daily Post 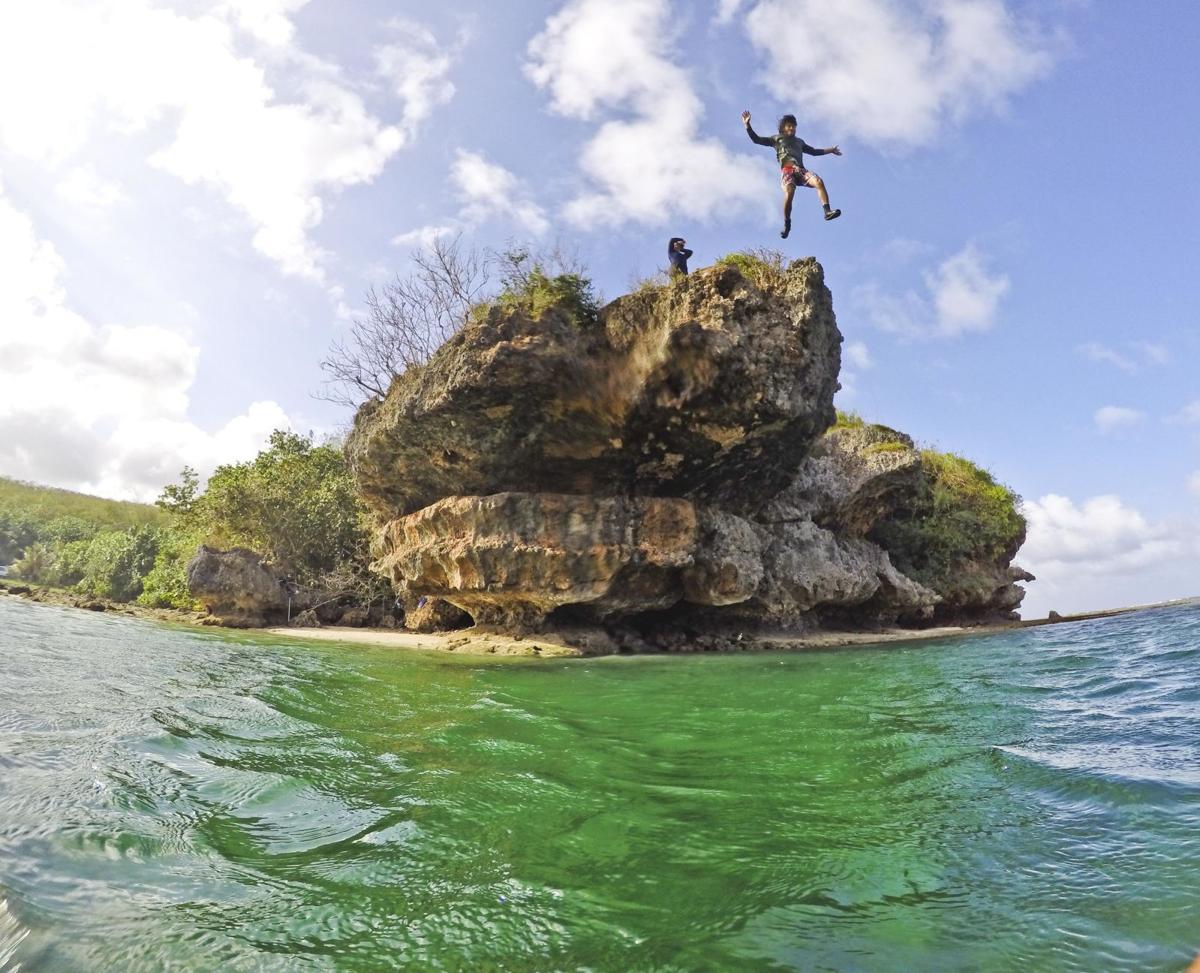 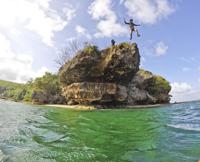 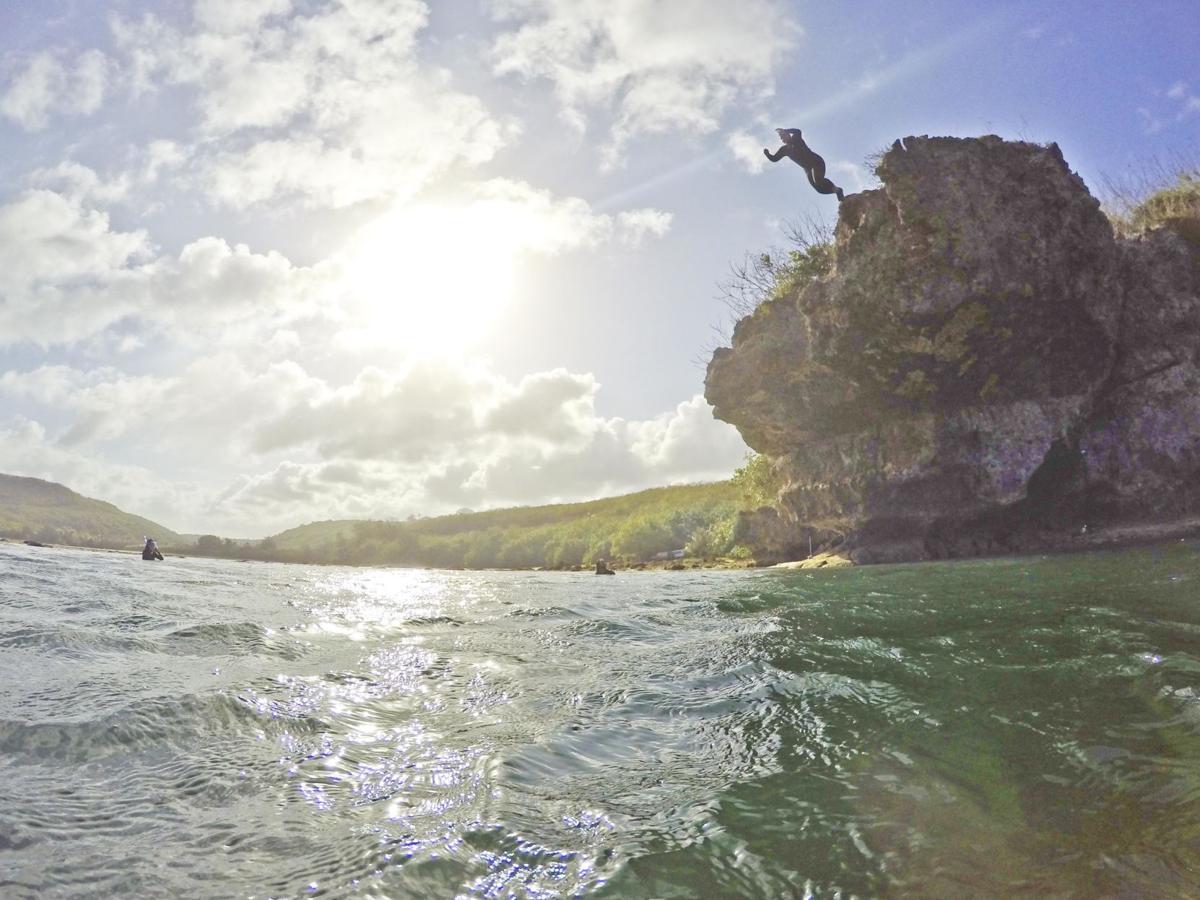 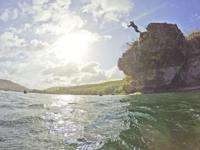 SLICE OF PARADISE: Near the edge of secluded Turtle Cove is a large limestone outcropping, recognized as the "turtle's" nose. Hiker's can take a thrilling jump from the nose into cool waters below. Tihu Lujan/The Guam Daily Post 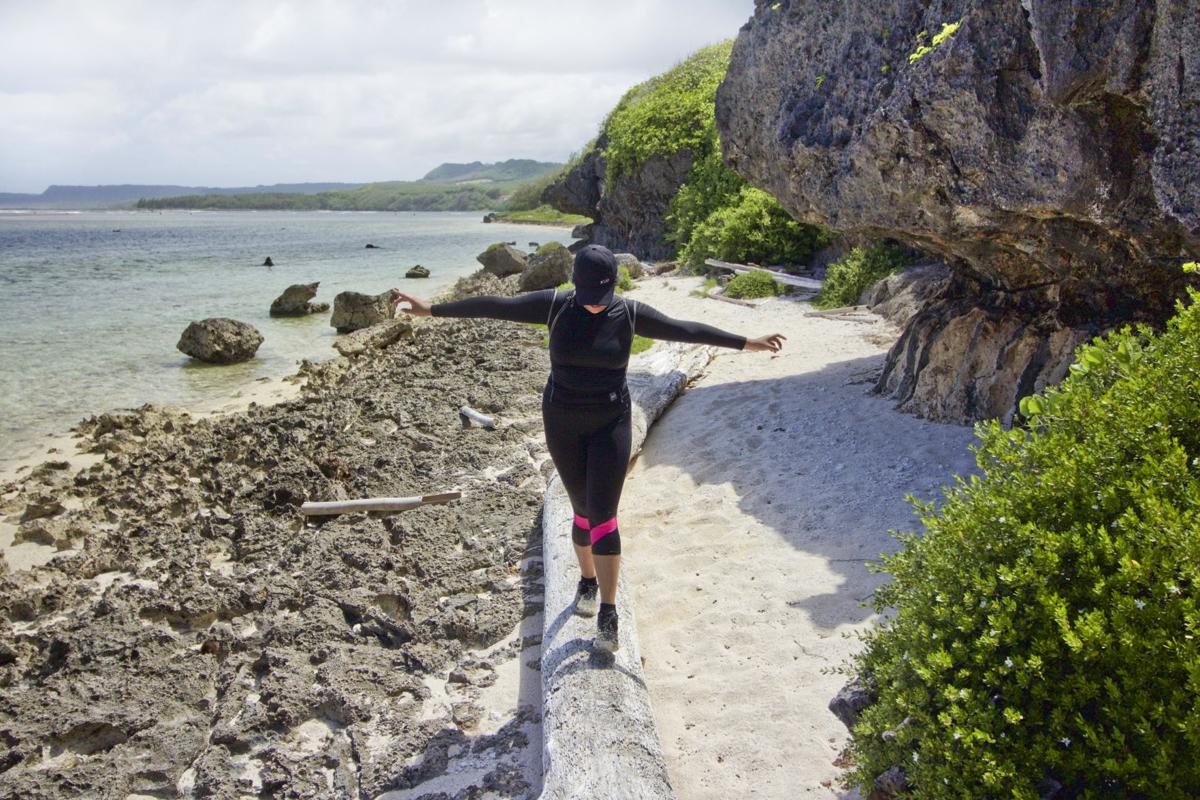 CRUISING THE COAST: As you cruise the cool coast between Turtle Cove and Taga'chang Beach in Yona, look out for a variety of crab species crawling about, zipping fish and even a few sleepy seabirds resting in the distance. Tihu Lujan/The Guam Daily Post 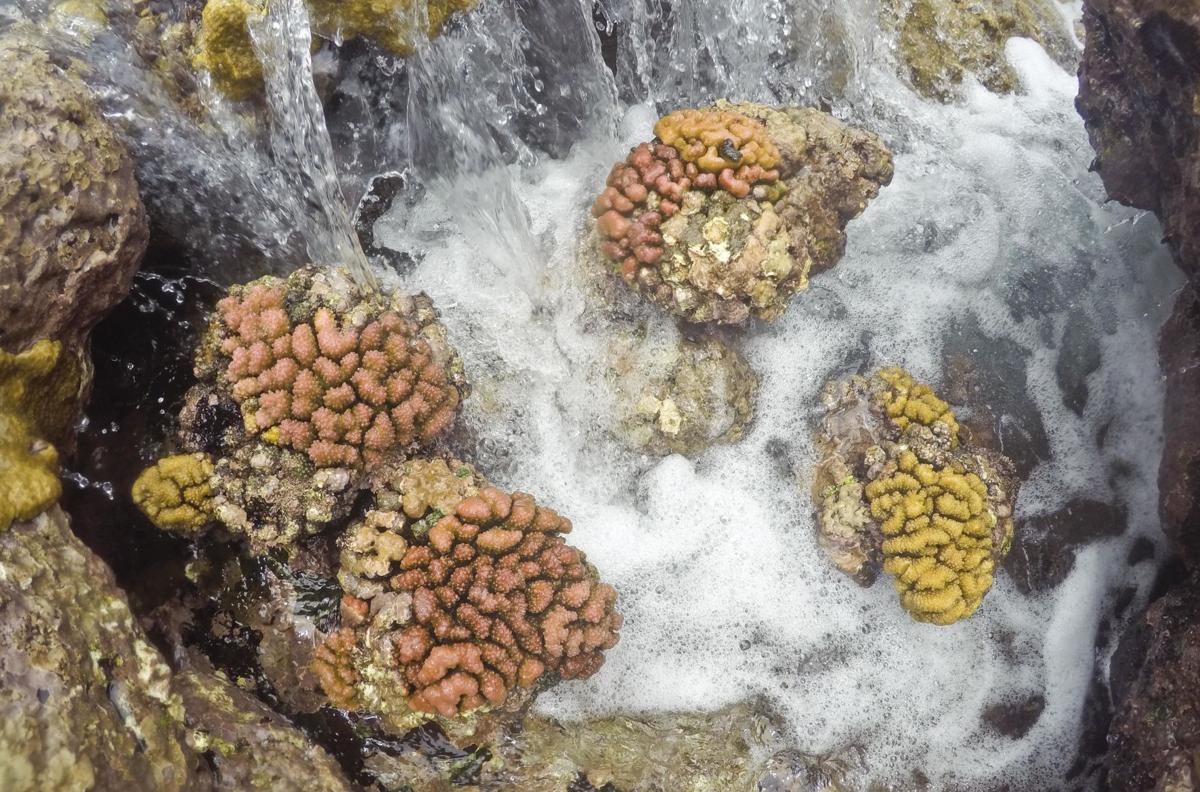 LOOK BUT DON'T TOUCH: If the weather is welcoming, hikers can take a dip in pretty pools along the reef by Taga'chang Beach in Yona. Here, you can peer into an underwater utopia, home to purple, pink, red, orange and blue corals. Tihu Lujan/The Guam Daily Post 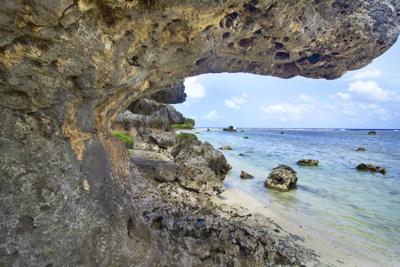 Amid crashing waves and crazy wind, robust ocean reefs roar to life with colorful coral and an electric ecosystem. Here, the raw beauty of nature is kept all natural.

Tour what's often called the "rainforest of the sea" with shallow coral reefs seen along the southeastern end of the island, between Ylig Bay and Taga'chang Beach in Yona.

Guarding Guam is roughly 42 miles of these nearshore reefs, which form a diverse ecosystem vital to the island's biology, culture and economy. The reefs, like any in the world, are created by colonies of tiny nutrient-rich organisms.

Without getting too close to the island's reefs, which have claimed countless lives, you can safely trek close enough to the reef in Yona without cause for concern.

While it's an easy beginner's hike with only a mile of flat walking along the coast, it's not recommended for pets or children due to the potentially hazardous surf nearby.

Additionally, you need to hike on a calm, clear and sunny day, and at low tide, in order to make it all the way to Taga'chang Beach. Otherwise, you're still able to hike on most days, as far as you responsibly can.

Before embarking on your coastal cruise, feel free to tour tranquil Turtle Cove. This secret slice of paradise was the site of a 60-unit, A-frame campsite for water and recreational activities in 1969, according to Guampedia.

Although the coastal complex was one of many causalities of Typhoon Pamela in 1976, the cove has remained a hotspot for beachside barbecues and water fun.

If you're wondering about the name, you'll be sad not to see any turtles swimming by. Only visible from far out in the water, the cove's cliffs and jungles combined resemble the outline of a turtle.

Near the edge of the secluded cove is a large limestone outcropping, recognized as the turtle's nose. Find the rocky "staircase" behind the boulder and climb to the top of the turtle's head.

From here, thrill-seekers can leap from the turtle's nose for a 15-foot drop into the refreshing, emerald-green waters below. The surrounding sea is also great for snorkeling.

After soaking in the satisfying, warm waters of the Pacific, carry on to the next leg of the journey by wading in waist-deep water around the head of the turtle, to the other side. Use the overhanging rock as support.

From here, Taga'chang is less than a mile away, but there are many bits of bliss in between.

If you like long walks on the beach, then you'll love the next half hour of the hike. As you cruise the cool coast, look out for a variety of crab species crawling about, zipping fish and even a few sleepy seabirds resting in the distance.

On particularly calm days and with low tide, you can safely walk out to the reef's edge to explore several shallow caverns, clear enough to see schools of colorful fish, coral and anemones.

If the crashing waves are at bay, hop into these pretty pools to peer into an underwater utopia, home to purple, pink, red, orange and blue corals.

When you're done checking out the reef's rocky wonders, head back to the shore and continue along the coast, passing dozens of fascinating limestone formations, seas of seaweed and more coastal creatures.

Toward the end of this breezy tour, you'll stumble onto the coastal headland, completely composed of wet limestone. Here, the waves thrash a little more violently nearby.

If the weather is welcoming, it's perfectly safe to travel over the reef bench, or "låmasa," to reach Taga'chang Beach, which is just around the corner. Avoid creeping close to the water, or swimming at all.

Once on the other side, after crossing the dangerously beautiful reef bench, Taga'chang Beach should be in sight. Walk though the few feet of shallow water to get there.

With towering ironwood trees, backdropped by gorgeous green cliffs, this southern locale is frequented by fishermen and picnickers.

While it's a little less groomed than Tumon Bay, Taga'chang is a hidden gem in its own right. Enjoy the soft, white sand beach and its inviting waters before heading back the way you came, or to your car parked nearby.

It's recommended that you hike in a group and park two cars in separate spots for easier access – one at the beginning and one at the end of the hike.

Park one car at the end of the hike, at Taga'chang Beach Park. To get there from central or northern Guam, travel south to Yona on Route 4/Chalan Kanton Tasi. Climbing the sloping hill past Pago Bay, prepare to turn left, just after a sharp curve, near the lookout. Then immediately turn right, and follow the winding hill down to the parking lot. Park here.

To get there from southern Guam, travel north to Yona on Route 4/Chalan Kanton Tasi, passing the entire village. After passing the village Mobil gas station, prepare to turn right before the sharp curve down to Pago Bay. Immediately turn right, and follow the winding hill down to the parking lot. Park here.

To get to the second parking spot from the Taga'chang Beach Park, head south, passing the entire village of Yona on Route 4/Chalan Kanton Tasi. After passing the 7 Day and Day Buy Day Supermarkets, continue down the winding, jungle-lined road.

Approaching the extremely sharp curve, midway down the hill, signal left and prepare to turn onto a hidden dirt road, surrounded by jungle brush.

The private road to the right is the way down to the trailhead at Turtle Cove, however, the road is narrow and unkempt. Drive on the road and park closer to the cove at your own risk. Otherwise, park along Route 4, on the main road, and walk down instead.