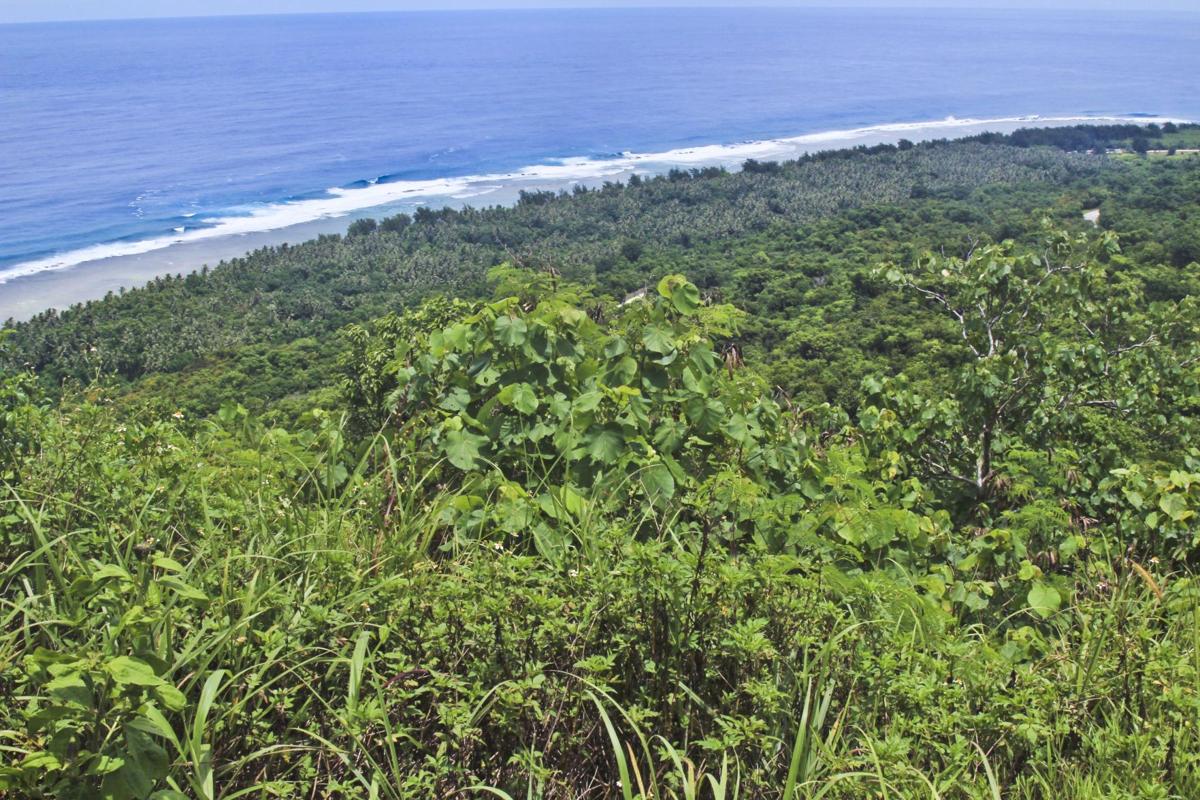 COAST: The Ritidian coastline as seen from a viewpoint above the beach. Tihu Lujan/The Guam Daily Post 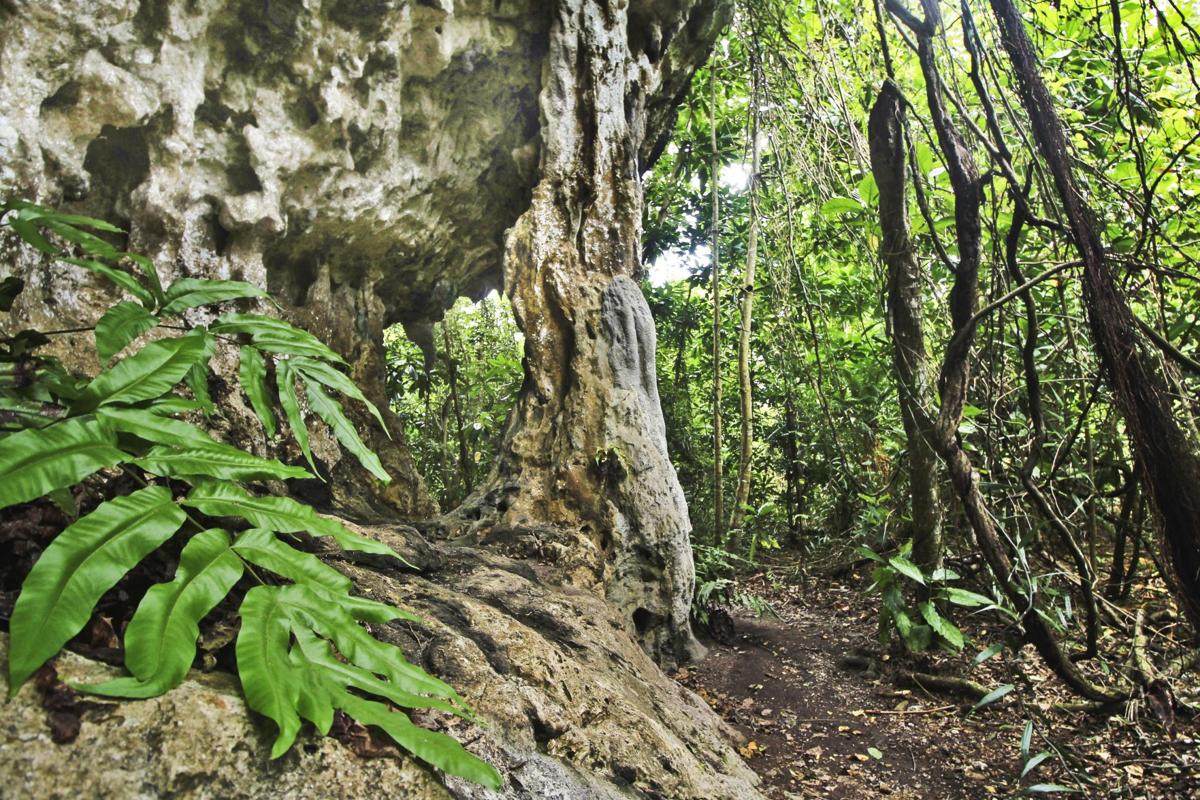 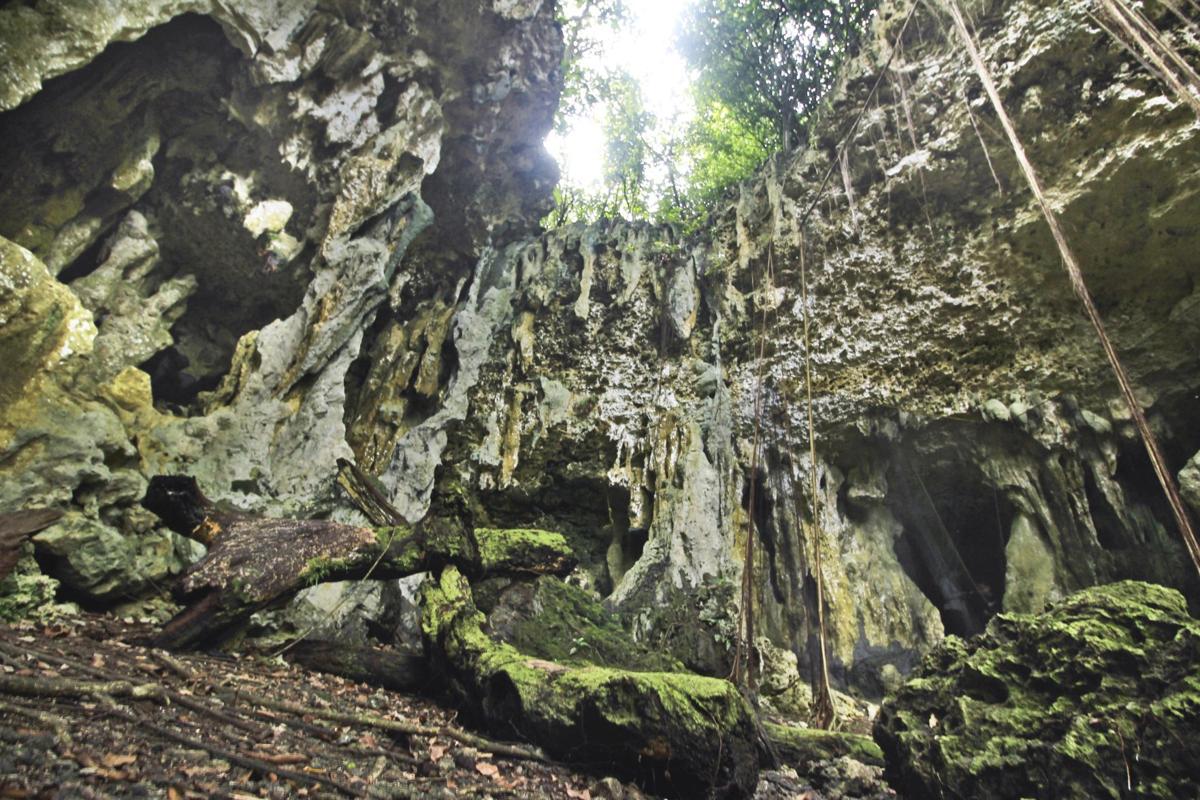 CAVE TOUR: The "cathedral" of Ritidian surrounds the ancient Star Cave and is an enchanting spot along the Cave Tour. Post file photo 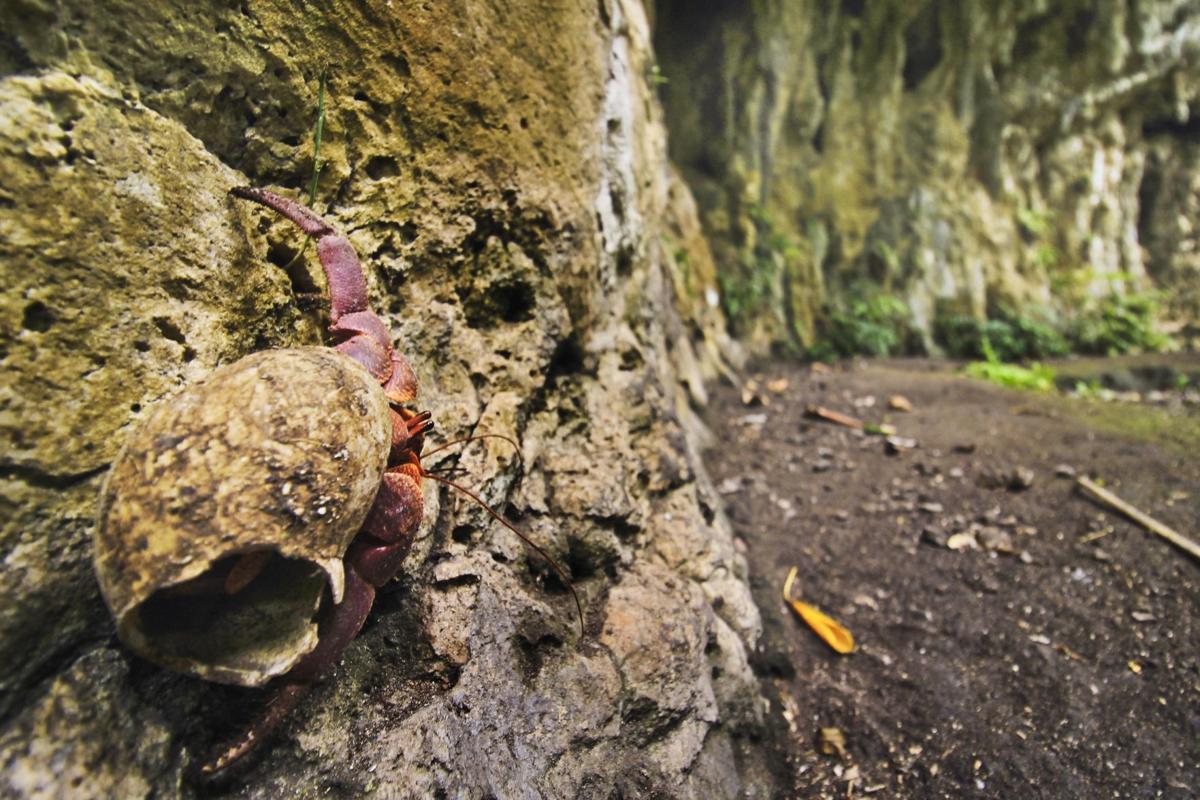 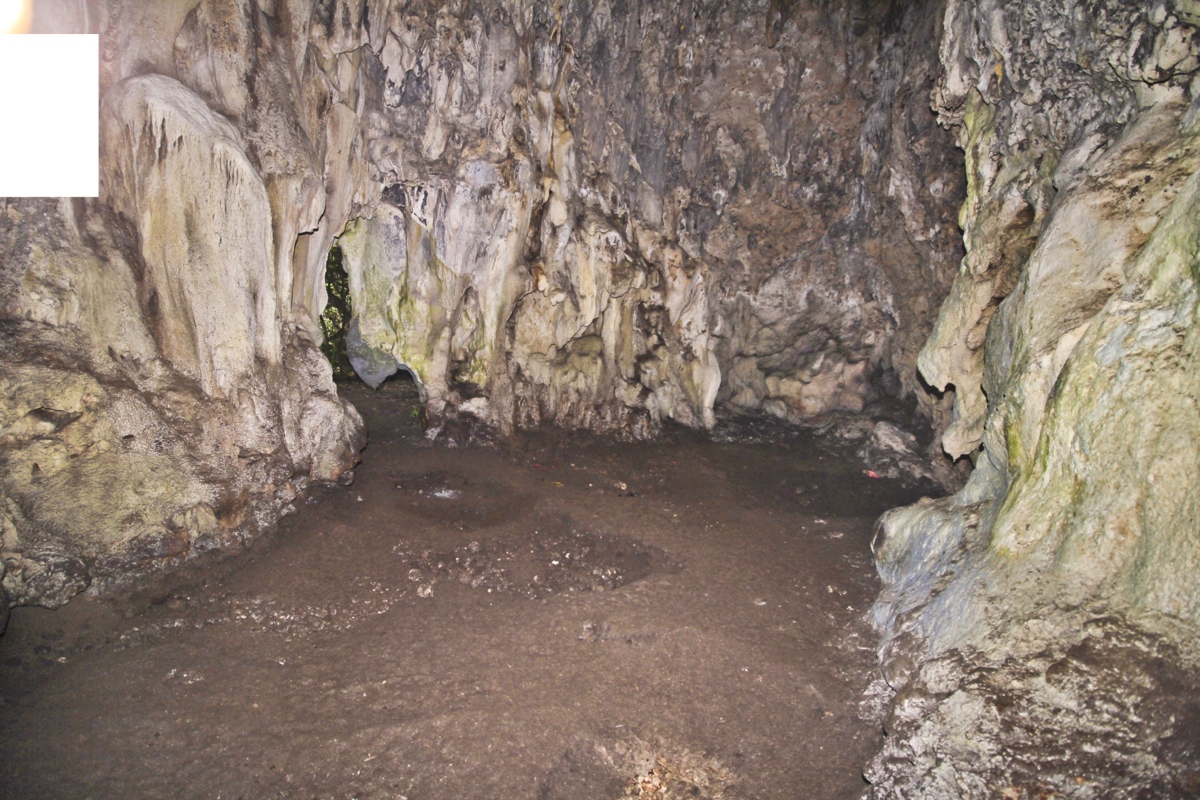 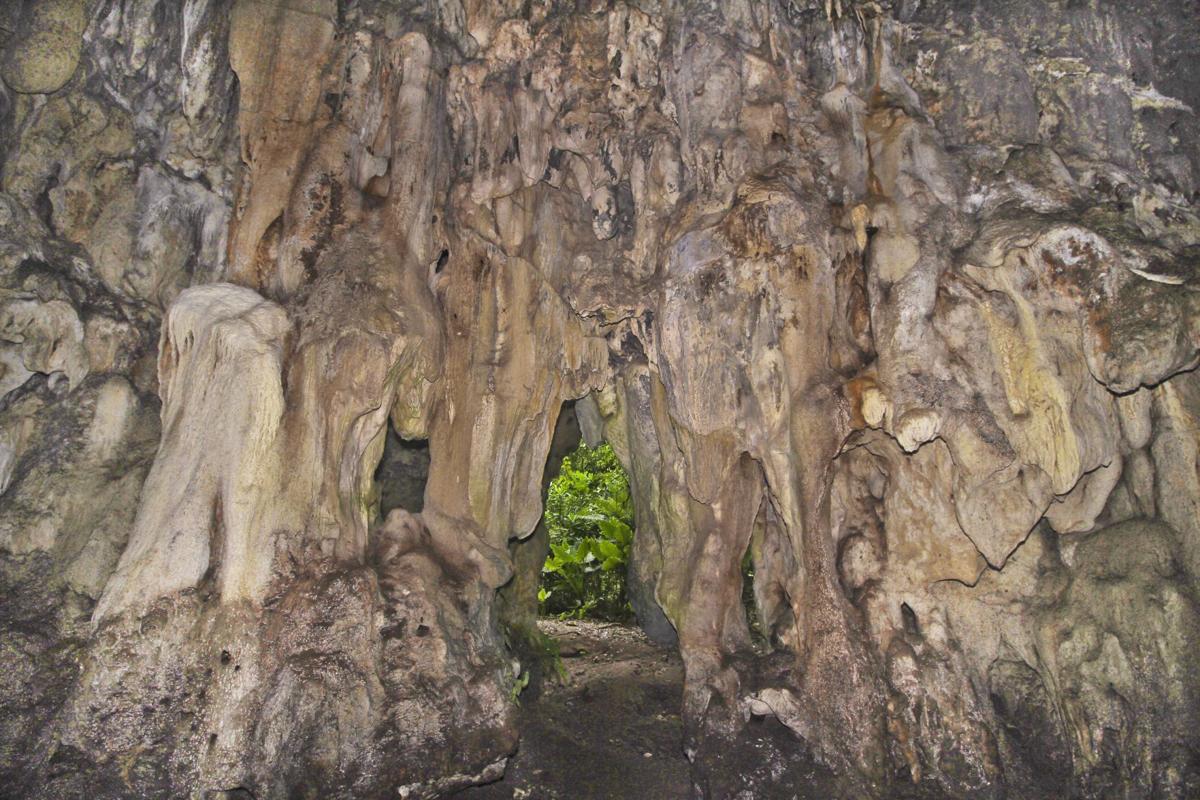 RITIDIAN CAVE: The interior of the shallow Beach Cave at Ritidian is shown in 2017. Human remains found in a Ritidian Point ritual cave and which are more than 2,000 years old point to the possibility that Guam's CHamoru has ancestry from the Philippines and Taiwan, a new study suggests. Post file photo 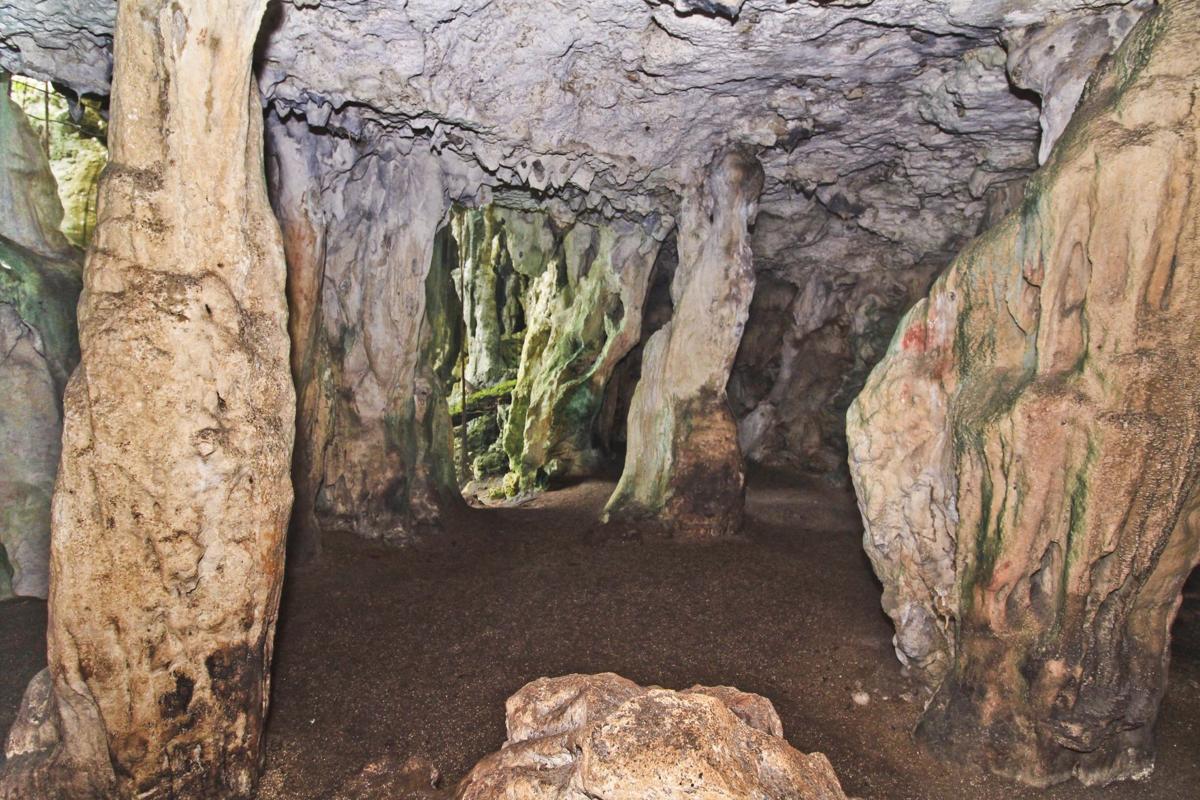 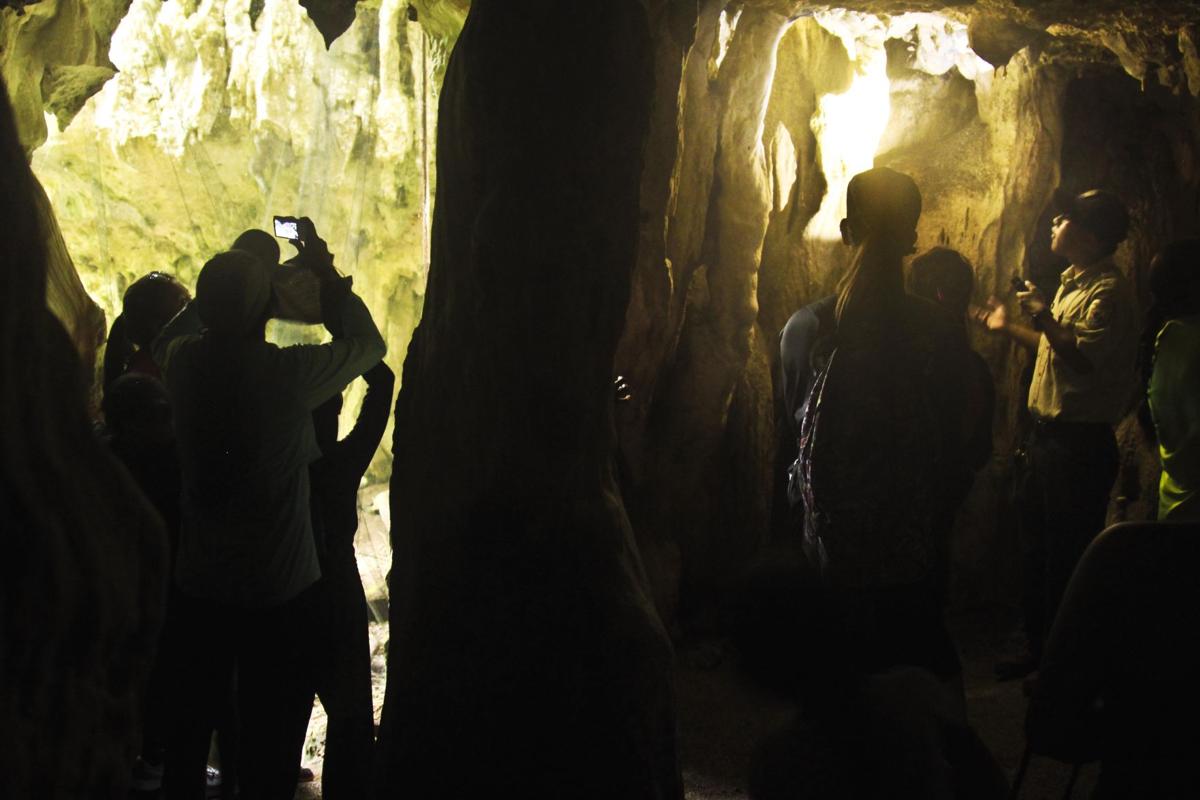 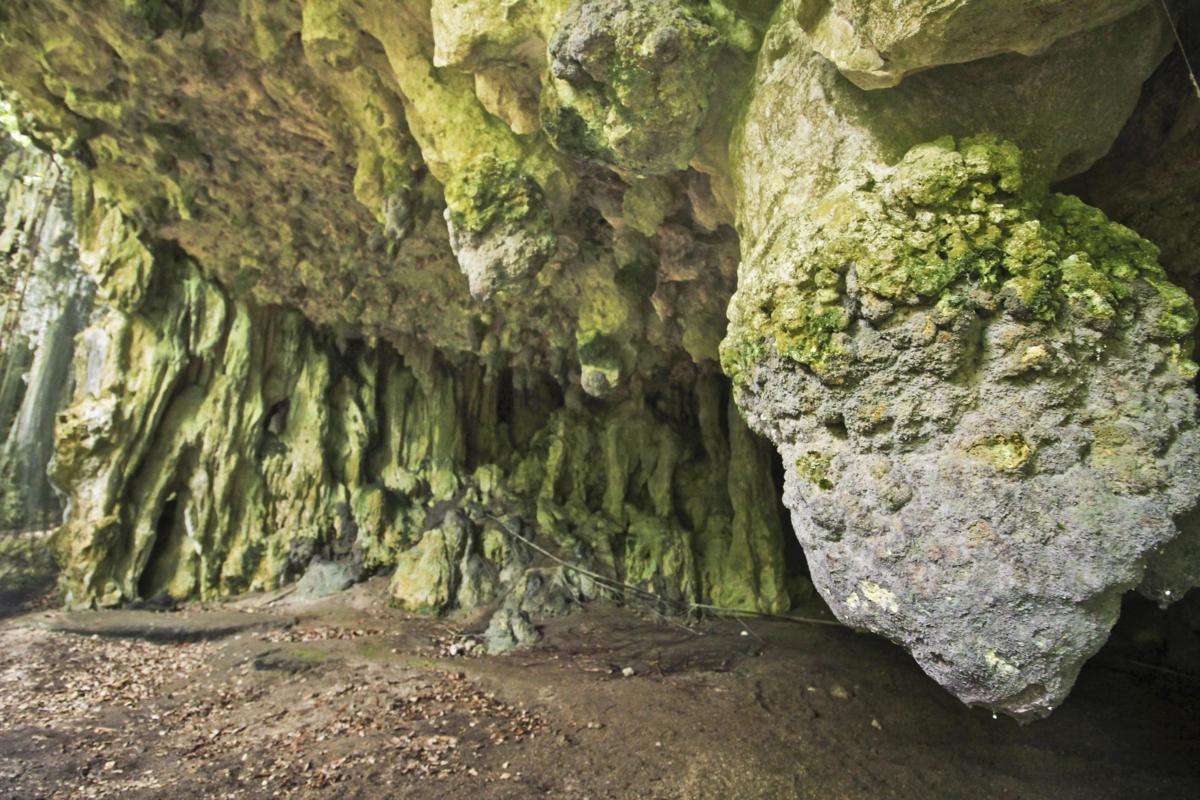 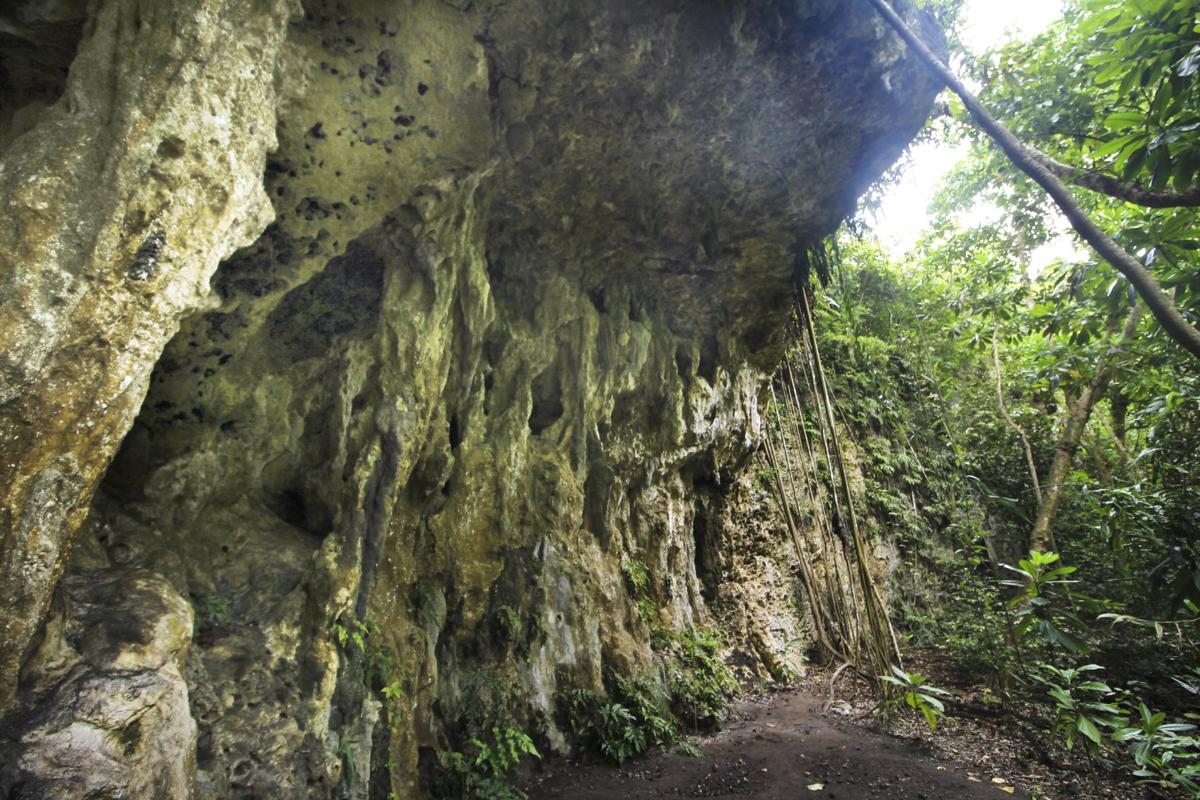 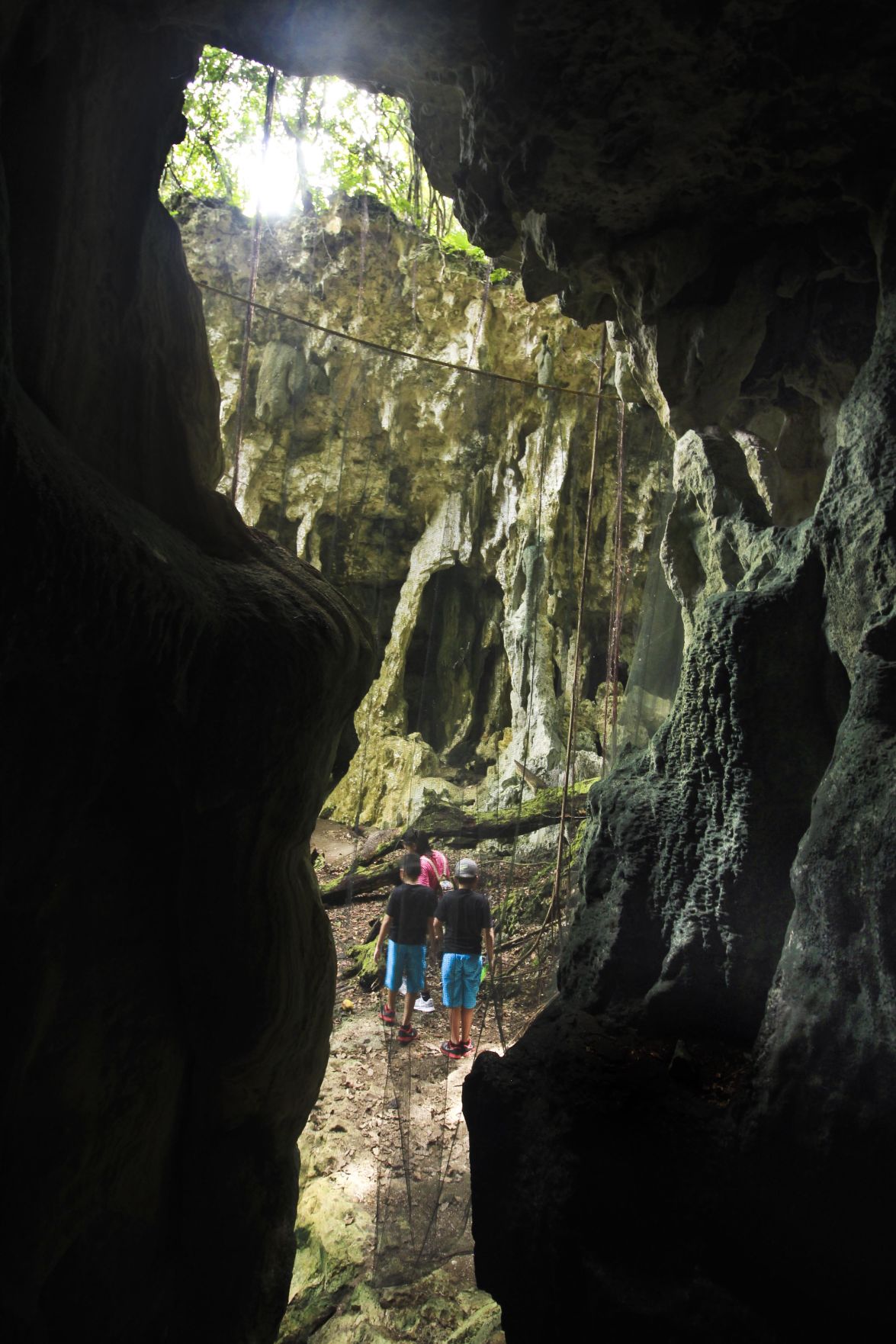 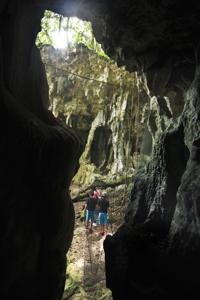 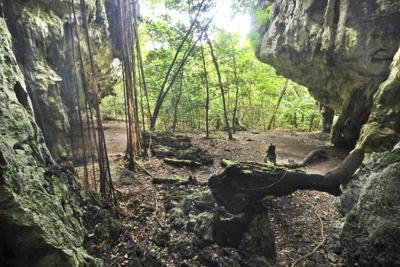 I acknowledge that hiking on Guam frequently takes visitors into the remote and most pristine areas of the island, often exposing ancient cultural sites, historically significant remnants, and various breathtaking landscapes. It is my duty as a resident of Guam to respect and protect the land, the water, and all things natural to my island. I will not litter, graffiti, or damage these unique hiking destinations. I will leave nothing but footprints and take only memories.

Living on Guam, we always hear the local tourism industry promoting the island as a tropical getaway abundant with white sandy beaches, postcard-worthy sunsets and other beautiful, natural phenomena.

Tumon is the usual marketing jewel of the island with its pristine bay and luxury shopping venues. Other stops along the typical island itinerary include several hiking destinations and local hot spots.

Essentially, nearly every locale on Guam is a possible tourist venture, but one remote area reigns king as the top Spot on the Rock.

Without a doubt, Ritidian is the textbook definition of a true tropical island getaway on Guam. You do hear about its white sandy beaches a lot, but the inherent charm of Ritidian lies in its history, caves, flora, fauna, reefs and culture.

In spite of the political landscape surrounding Ritidian, also known as “Litekyan,” Spots on the Rock will spend this weekend and the next uncovering the hidden treasures of the northern jewel.

Not necessarily to showcase what is “at stake,” but to encourage island residents to visit Guam’s greatest, unspoiled natural wonder for a getaway of their own.

Get ready for a road trip

No matter where you live on the island, traveling to Ritidian is an adventure in itself.

I live in Talofofo, so the literal hourlong journey from down South to the island’s northernmost point has always been a fun road trip filled with engaging conversations, good music, lots of snacks and memories in the making.

So, before you head out, be sure to pack your favorite chips, drinks and maybe even plan to have a picnic!

Create your ideal summer road trip playlist because on Guam, it’s always summer! Don’t forget to charge your phone for the kids who’ll likely be bored along the ride.

Lastly, note that the road into Ritidian has yet to be resurfaced — and unless you’re driving a large truck, jeep or heavy-duty vehicle, the ride in will feel more like a hike for any compact cars. Be ready to play Guam’s favorite game of “dodge the pothole” on steroids.

To get to Ritidian, if coming from the southern and central areas of the island, travel along Route 1 (Marine Corps Drive) northbound toward Dededo. After passing Micronesia Mall, prepare to turn left onto Route 3A, where Guam Regional Medical City is.

Continue driving along this long, straight road for the next 15 minutes, about  5 miles – passing the Naval Communications Stations (NCS) – until you reach a Y-shaped intersection, across from the Starts Guam Golf Resort.

From the Y, Ritidian lies another 6 miles ahead, but the journey in will likely take around 20 minutes due to the rugged dirt roads and enormous potholes. Simply follow the sole road all the way to Ritidian.

You’ll know you’re almost there when you reach a last final stretch of unbearably rough dirt terrain. I’d consider it a final trial to see if beachgoers value the prize enough to trash their tires over it, but I guarantee it’s worth it!

After passing the challenging patch, you’ll soon come to the top of a winding hill. There is a viewpoint off to the left side of the road that is worth checking out. Afterward, continue down the curvy road until you reach the Nature Center. You can either park here or down the nearby dirt road closer to the beach and nature trails.

Either way, I recommend checking out the center for more information on the wildlife refuge and all it has to offer. It’s a very educational setting with interactive exhibits and friendly refuge officers.

Note that the hikes covered this week and the next are not readily accessible by the public and will be restricted to nature tours coordinated by the wildlife refuge’s Nature Center.

This week we’ll highlight Ritidian’s cave tour, which explores about a quarter mile of the area’s towering limestone cliffline, as well as two historically significant caves and a latte stone site.

The hourlong cave tours are closed off to unaccompanied visitors, so be sure to catch either one of the scheduled tours offered every Tuesday and Saturday from 9 to 11 a.m. Interested hikers can also schedule private tours by contacting the refuge in advance.

On any given tour, an intelligible, friendly park ranger will guide visitors through a jungle path that lies directly beneath the refuge’s majestic cliffline.

Directly across from Ritidian’s powdery-sanded beaches is another, lesser-known jewel of the refuge, where two caves and exotic plant and animal species find a home in the magical jungle.

In fact, entering the jungle is an enchanting experience itself! Without many words to describe it, the initial walk in is mystical, and somehow feels as if we’re traveling back in time. The tour ahead isn’t so farfetched from the idea, either.

Just a few feet into the tour, visitors will spot historical shards of pottery, remnants of the site’s ancient CHamoru and Spanish-era beginnings.

Once the group reaches the cliff, a couple of small latte stones are also found to be still standing.

From here begins the real straightaway journey through ancient CHamoru history, filled with geological wonders and nature crawling all about.

It’s preserved habitats like the nature trail ahead that truly exhibit the unspoiled beauty of Guam, and where an ancient Hafa Adai spirit is palpable.

The first stop along the tour is the Ritidian Beach Cave, a shallow dwelling with some stellar stalagmites and ancient pictographs. The prehistoric drawings are of great interest to archaeologists and give a glimpse into the ancient CHamoru past.

Past the Beach Cave, the trail continues through the dense jungle, and you can bet your bottom dollar you’ll have sights of a variety of cool creatures crawling about!

From shy hermit crabs and fluttering butterflies to speedy geckos and gazing iguanas, there’s a good chance you’ll see all of them.

Another feature to the hike includes interesting tidbits on the vast variety of plant species found growing off the walls of the cliffline and among the jungle.

The limestone walls themselves are a sight to see! There are at least two rock arches to be seen and other formidable formations along the cliffline. Not to mention, there are tons of trees and vines rooted in the limestone!

At the end of the tour is the greatest sight of all – the Ritidian Pictograph Cave, also known as the Star Cave. This site for sore eyes is definitely a contender for the most beautiful Spot on Guam.

Sitting beneath an indent in the cliffline are limestone walls draped with cascading vines and moss-covered tree trunks. The towering jungle above casts fractured rays of light on a site in Ritidian coined as the island’s natural “cathedral.”

The atmosphere surrounding the Star Cave is a sacred one for sure. Without too much history known about that particular area, it definitely feels of importance.

Inside the Star Cave are several ancient CHamoru pictographs, unique to this part of the island. The only other known pictographs on Guam lie undisturbed in Inarajan’s Gadao Cave.

According to park rangers, the prehistoric drawings depict what life hundreds to thousands of years ago might have looked like. With that said, don’t go in expecting to see some professional artwork with definite subjects.

The pictographs, which have also been weathered and eroded over the years, are more or less a bunch of miniature shapes and lines scattered across the cave walls.

However, archaeologists have related the ancient drawings to symbols of fishing and farm life in prehistoric Ritidian.

A collective set of dotted pictographs in a closed off section of the cave are thought to paint pictures of the stars, likely used for navigation by the ancient CHamorus. While only speculation, the Star Cave gets its name for its out-of-this-world pictographs.

After exploring the shallow cave system here and the cathedral-like area just outside, park rangers will guide the group back to its starting point, ending an enchanting travel back in time.

Cave Tours are offered every Tuesday and Saturday from 9 to 11 a.m. Private tours are also offered.

The Ritidian Wildlife Refuge is open from 7:30 a.m. to 4 p.m. daily. However, the refuge is subject to close at any time pending the island’s condition of readiness or storm warnings issued by the National Weather Service.

Visit the refuge’s website at www.fws.gov/refuge/guam or call them at 355-5096 for more information Ritidian and tours.

How to schedule a private Cave Tour:

Cave Tours are limited to a maximum of 30 individuals and are scheduled on a first-come-first-serve basis.

To make reservations, call the Ritidian Wildlife Refuge at 355-5096 with the following information: