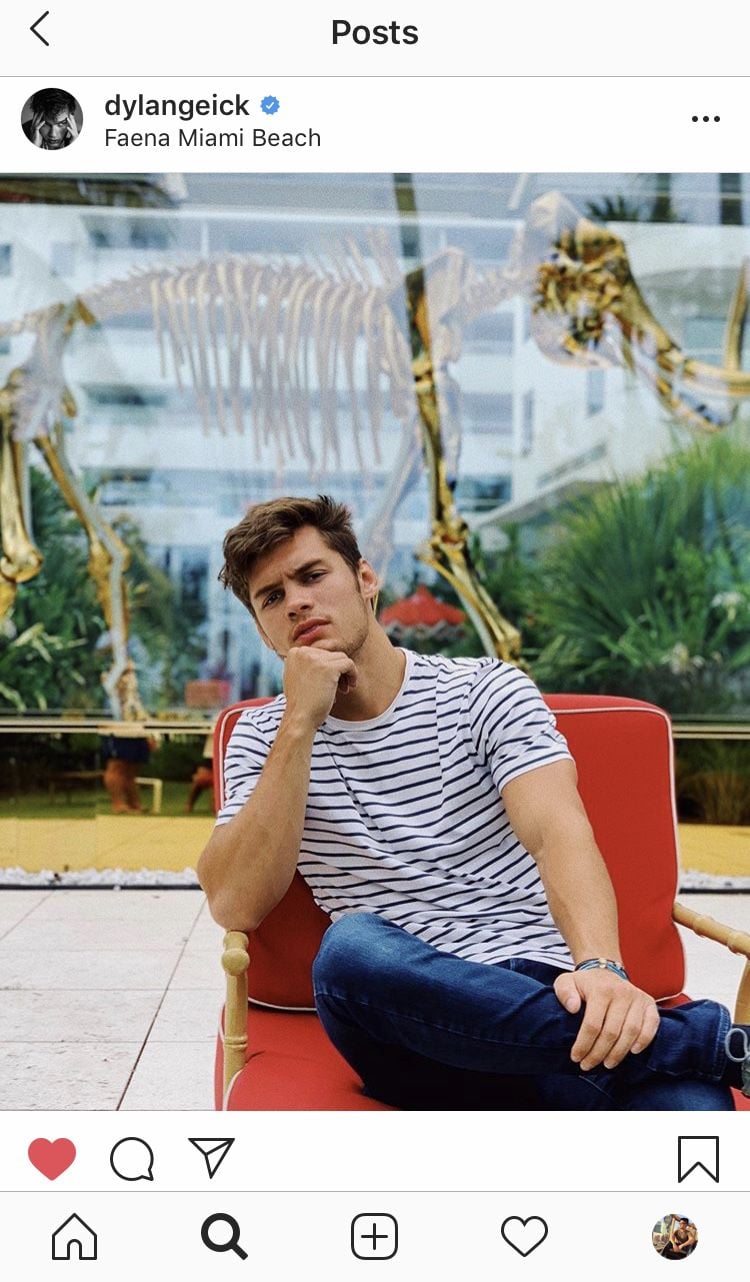 GEICK: A superb wrestler at Columbia University, Dylan Geick became famous when he revealed his sexuality to his friends in high school. Featured in Outsports and in The New York Times, the internet personality’s choice to be honest about his identity enabled him to garner 745,000 followers on Instagram. Screenshot of Dylan Geick’s Instagram post 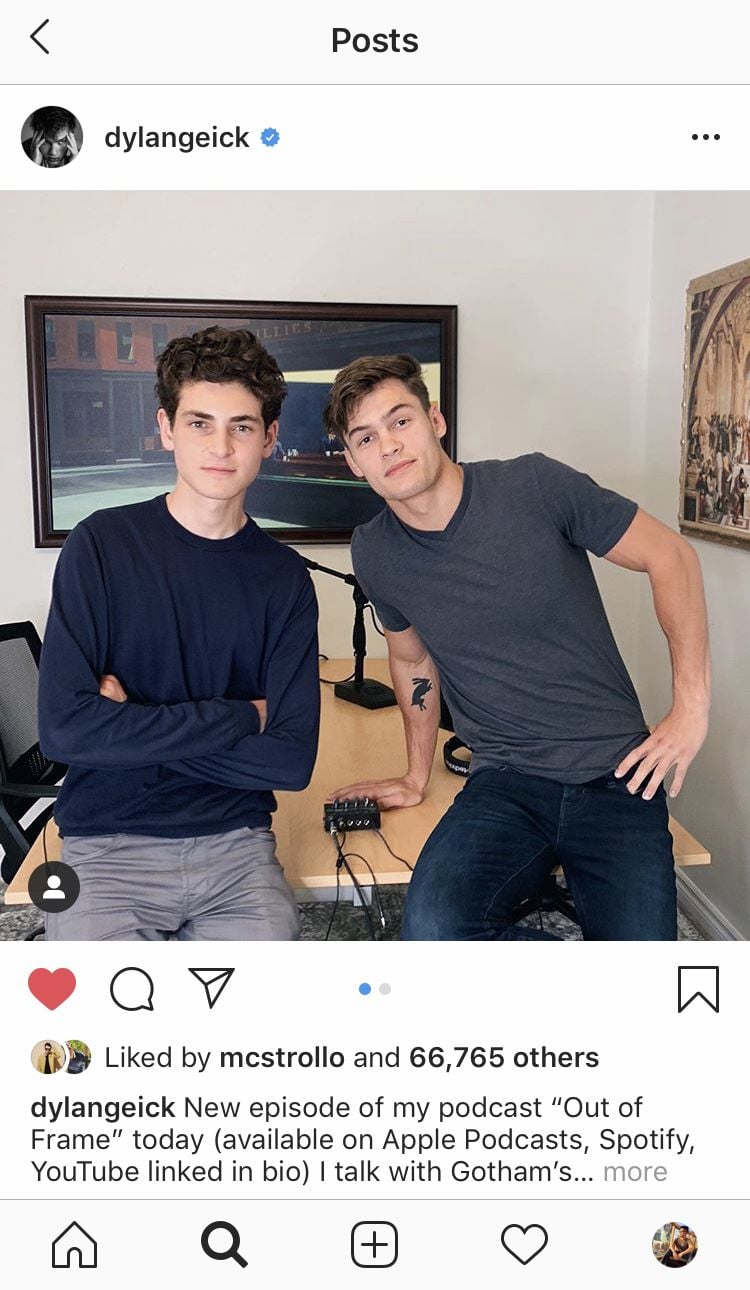 INTERVIEW: In his podcast "Out of Frame," Dylan Geick interviewed David Mazouz, left, of Fox's "Gotham," about his experience in playing the role of Batman as well as his future plans. Screenshot of Dylan Geick’s Instagram post

GEICK: A superb wrestler at Columbia University, Dylan Geick became famous when he revealed his sexuality to his friends in high school. Featured in Outsports and in The New York Times, the internet personality’s choice to be honest about his identity enabled him to garner 745,000 followers on Instagram. Screenshot of Dylan Geick’s Instagram post

INTERVIEW: In his podcast "Out of Frame," Dylan Geick interviewed David Mazouz, left, of Fox's "Gotham," about his experience in playing the role of Batman as well as his future plans. Screenshot of Dylan Geick’s Instagram post

An influential student at Columbia University, Dylan Geick is the epitome of a phenomenal individual. Known for his proficiency in wrestling, the 20-year-old became a two-time All-American high school wrestler, a three-time member of the Illinois Freestyle national team and placed fourth in his final two seasons in his weight class in the Illinois State Championships.

Other than being an outstanding athlete, Geick became an internet personality when he opened up about his sexuality to his peers in Stevenson High School in Illinois. Due to his sincere and inspiring move, Outsports and The New York Times featured him on their platforms.

With 750,000 followers on Instagram and 203,000 subscribers on YouTube, Geick’s fans constantly await for his weekly podcast, "Out of Frame," in which he interviews prominent businessmen and influencers, such as Ponder’s CEO William Legate and David Mazouz who played the role of Bruce Wayne in Fox’s “Gotham.”

Balancing school and all of his endeavors may seem like a challenge, but according to Geick, he just needs to put his head down and focus on being productive.

“I become very scheduled and habitual,” the collegiate wrestler stated. “I find that it’s best not to think about how busy I am and just let the rush of classes, practices and social media take me along for the ride.”

His ardent passion for wrestling began when he started to take up taekwondo when he was 6. He thought that it would transform him into Jason Bourne.

“When I was 8 years old, I watched the first few UFC championships and immediately knew that was what I really wanted to do, so I switched into MMA.”

For years, the star athlete focused on jiujitsu and muay thai. It was watching Matt Hughes fight in the Ultimate Fighting Championship that made him want to pick up wrestling. At first, he used it as a tool for mixed martial arts, but he quickly fell in love.

"The work ethic and camaraderie in wrestling are simply unmatched by any other sport in the world," he said.

Outside of the mat, Geick is an English major and an adept writer who self-published his first book, “Early Works: A Collection of Poetry,” in 2017. Growing up with a motley of sci-fi and fantasy works, such as “Ender’s Game,” “Eragon” and “Harry Potter,” the award-winning wrestler had always been fond of the world of literature.

“Honestly, writing felt as natural as reading when I was younger. As I got older, I just continued to learn, and my appreciation for writing as an art form grew,” Geick said. “My younger sister also seems to have picked up the pen. Her poetry has unbelievable depth and craft for such a young writer. She’ll outshine me for sure.”

Lately, the vlogger had been more active in YouTube — uploading podcasts every Sunday. The initial idea for the podcast was to talk to Geick’s generation of social media influencers about what their lives really consisted of, according to the star athlete.

“I was interested in showing the human side of celebrity culture, how it came with such massive ups and downs, how unregulated it was and what a healthier relationship between creators and consumers of digital content might look like.”

Other than that, the podcast has become very free form. Now, Geick talks to musicians, actors, political activists, and investors. Entering closed gates to talk with fascinating people, he attempts to let them control what they discuss in the podcast. “I’m just there to soak up the knowledge and give some commentary.”

Christin Baik, a junior at Academy of Our Lady of Guam, used to watch Geick’s YouNow livestreams and found him captivating. She described Geick as a genuine and brave man who challenges the status quo.

“He was able to accomplish so much at a young age and that took a lot of risks,” Baik said. Breaking the societal “rules” of stereotypes, such as "feminine equals gay" and "jocks equal stupid" proves his braveness. He uses his YouTube channel as a way to have fun and inspire people rather than a platform to get famous or money.”

Baik thinks Geick’s will to discuss taboo subjects as well as other political topics makes him stand out from other celebrities.

“Most YouTubers I have seen do not discuss these topics because they know that some viewers will not agree with them, and they do not want to risk losing popularity,” Baik stated. “From my point of view, he cares more about changing people's mindsets rather than counting his subscriber count.”

After a gap year, Geick is returning to Columbia University to continue his studies. He said it would’ve been great to have a normal college experience, leaving behind social media sometimes. Nevertheless, he revealed that despite juggling school and his motley of activities, he had a blast so far — not regretting anything.

“One thing wrestling taught me well is that valuing medals, achievements and milestones brings far less peace than appreciating experience and relationships,” Geick said. “My proudest achievements are the relationships I’ve built with my friends.”

Despite the fact that the wrestler is known for his bravery in breaking the stereotype that an athlete needs to be macho and heterosexual, Geick still thinks that he hasn’t made half the impact he would like to. He said maybe the community he came from felt change, but on a national stage he is aware that there are so many athletes living a life half in silence.

“I have received hundreds of messages of personal impact and those give me hope, but I know that for each of those, there are ten still in the closet in division one or pro sports,” Geick said. “I think I might have to win some national titles to make headway in the next few years.”