A TALK: Lana Condor, right, plays Lara Jean, and Noah Centineo plays Peter Kavinsky in "P.S. I Still Love You," which is part two of the Netflix movie "To All the Boys I’ve Loved Before." Netflix 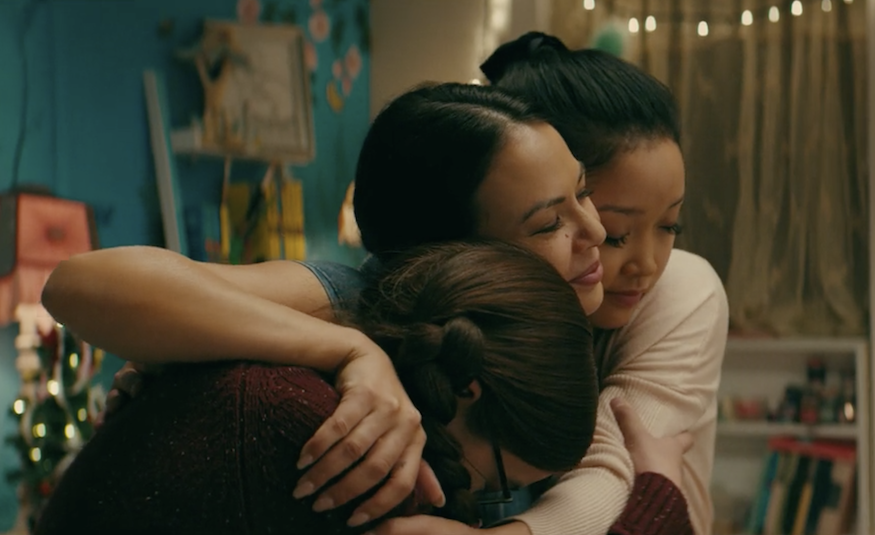 A MOMENT: Lara Jean, played by Lana Condor, right, embraces her sisters in a scene from "To All the Boys I’ve Loved Before." The second installation of the Netflix original, "P.S. I Still Love You,” is running on Netflix. Netflix

CARB LOADING: A scene from “To All the Boys I’ve Loved Before," a Netflix breakout released last summer. Part two is now showing on Netflix. Netflix

A TALK: Lana Condor, right, plays Lara Jean, and Noah Centineo plays Peter Kavinsky in "P.S. I Still Love You," which is part two of the Netflix movie "To All the Boys I’ve Loved Before." Netflix

A MOMENT: Lara Jean, played by Lana Condor, right, embraces her sisters in a scene from "To All the Boys I’ve Loved Before." The second installation of the Netflix original, "P.S. I Still Love You,” is running on Netflix. Netflix

CARB LOADING: A scene from “To All the Boys I’ve Loved Before," a Netflix breakout released last summer. Part two is now showing on Netflix. Netflix

There’s something to love about watching a hopeless romantic fall in love in high school. It’s a meaningful experience that culminates at the budding of a new relationship. But sadly there comes a part where the “honeymoon stage” ends. So what happens then?

In the second installment of the Netflix Original, “To All the Boys I’ve Loved Before,” which was originally written by Jenny Han and adapted into film by Michael Fimognari, the audience is faced with the ups and downs that come with high school relationships.

But before we dive right into the movie (and into our feelings, too), let’s do a quick recap.

In the closing scenes of the first “To All the Boys I’ve Loved Before,” Peter Kavinsky, played by Noah Centineo, asks Lara Jean, played by Lana Condor, to be his girlfriend in the middle of the soccer field. They kiss and the audience is left with butterflies and happy vibes.

As “P.S. I Still Love You” opens, it carries over the same energy while the scene begins to show a bubbly Lara Jean getting ready for a date with Peter.

As Kavinsky comes in with flowers, the audience swoons! There he is, our wonderful Prince Charming.

As they go on this date, the angles and shots taken of the two really highlight the beauty and happiness that comes with falling in love. Their date is simply beautiful. It’s everything.

And that’s the thing about Peter Kavinsky and Lara Jean, from fancy dinners to lantern festivals to spontaneous fair dates, they seem to have done it all.

It just shows that everything is all sunshine and rainbows for the two, until the letter that changes everything comes in. The letter from John Ambrose McClaren.

We discover that John Ambrose, played by Jordan Fisher, writes Lara Jean back, after receiving the letter that Lara Jean wrote in middle school for him. We now know the letter was mailed by Kitty (her younger sister).

And as she reads this letter, memories and feelings slowly creep in. She then snaps out of it, and chooses to believe that her troubles and thoughts of John Ambrose would stop there. She thought she wouldn’t have to write him back and she could go back to her perfect relationship with Peter.

And that does happen for a while, until Volunteering Day. Lara Jean decides to volunteer at Belleview Retirement Home, since her sister Margot volunteered there, while Peter chooses to volunteer with his friends elsewhere.

On her first day on the job, all seems to go well. She meets Stormy, who is a feisty, endearing, and motherly figure played by Holland Taylor. But everything is going great, until the new volunteer comes in, and of course it’s John Ambrose.

The two briefly talk, but it’s mostly about the forbidden letter Kitty sent to him, but these conversations seem to hit Lara Jean differently, since the audience begins to see how the exchange between the two resonates deeply within Lara Jean.

The audience, along with Lara Jean, is faced with multiple questions. Why now? What if the letter was sent earlier? What if John Ambrose comes back for a reason?

But these questions start to deepen as the rift between Lara Jean and Peter widens.

To put it simply, his negative characteristics begin to shine.

He stood up Lara Jean for hours, plagiarized an Edgar Allen Poe poem for Valentine’s Day, got mad at her for arranging a reunion with John Amrose. He chooses to party rather than spend time with her, but the kicker goes to his relationship with Gen.

Gen, who was Peter’s longtime girlfriend before Lara Jean, was a constant source of insecurity for Lara Jean. But Peter didn’t seem to care about that.

Throughout the film, we are reminded of Peter’s actions that make him look like a very bad boyfriend to Lara Jean.

John Ambrose, on the other hand, has everything that Peter was missing.

The ball at the Belleview seems to be the perfect window for Lara Jean to take a chance on a new leading man, a new love.

Channeling the negative feelings of the ending

After the movie, I was enraged. Why did Lara Jean do that? But it comes down to the basic principles of loving someone. And although it may be disappointing to me, it was a choice made in love.

You can decide for yourself whether she made the best decision.

Soundtrack and other cinematic comments

The film’s soundtrack is a unique compilation of songs that will remind watchers of a time where they were either in love, growing up, going through heartbreak, or all of the above.

The curation of the list and its fantastic order within the film stood out among the film's many cinematic features.

Artists ranging from Lauv to MARINA highlighted the tone and mood of each scene. And the execution of each song from frame to frame was memorable and lasting.

The Netflix film was original in its concept and delivery. The positioning of the frames, angles, and shots focus on the mood of each portion of the movie. The hues that were highlighted and used for each season and time within Lara Jean and Peter’s relationship just made the film more likable and memorable for their audience.