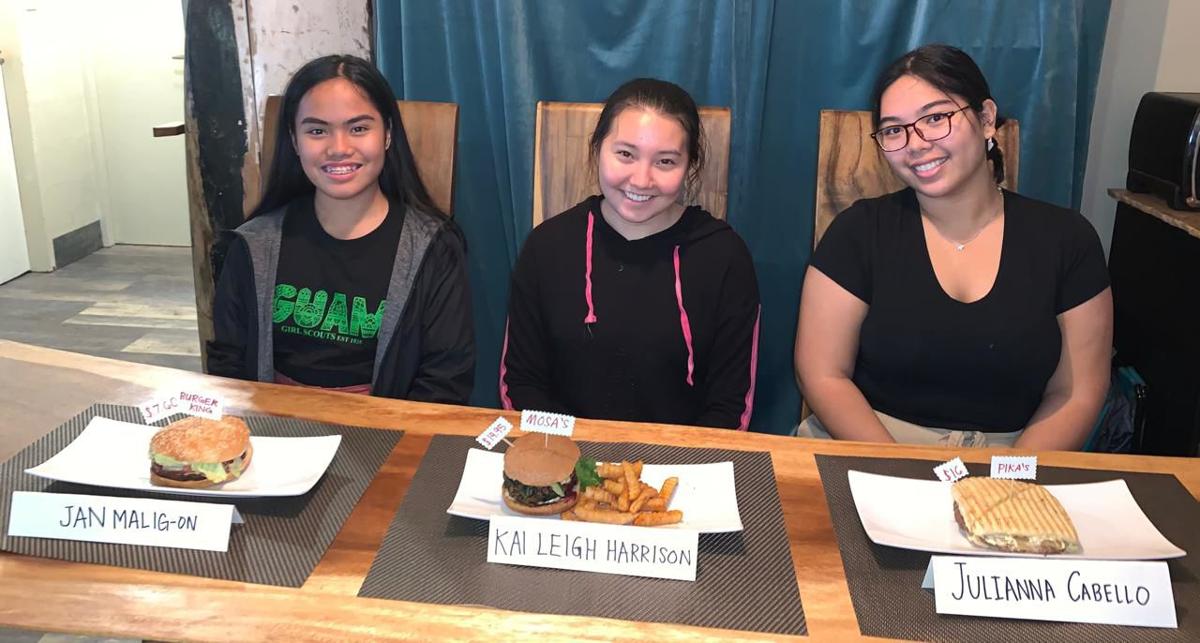 BURGERS?: Burgers, from right, from Pika’s Cafe, Mosa’s Joint and Burger King serve a growing population of vegetarians and vegan eaters on Guam. The Scoop 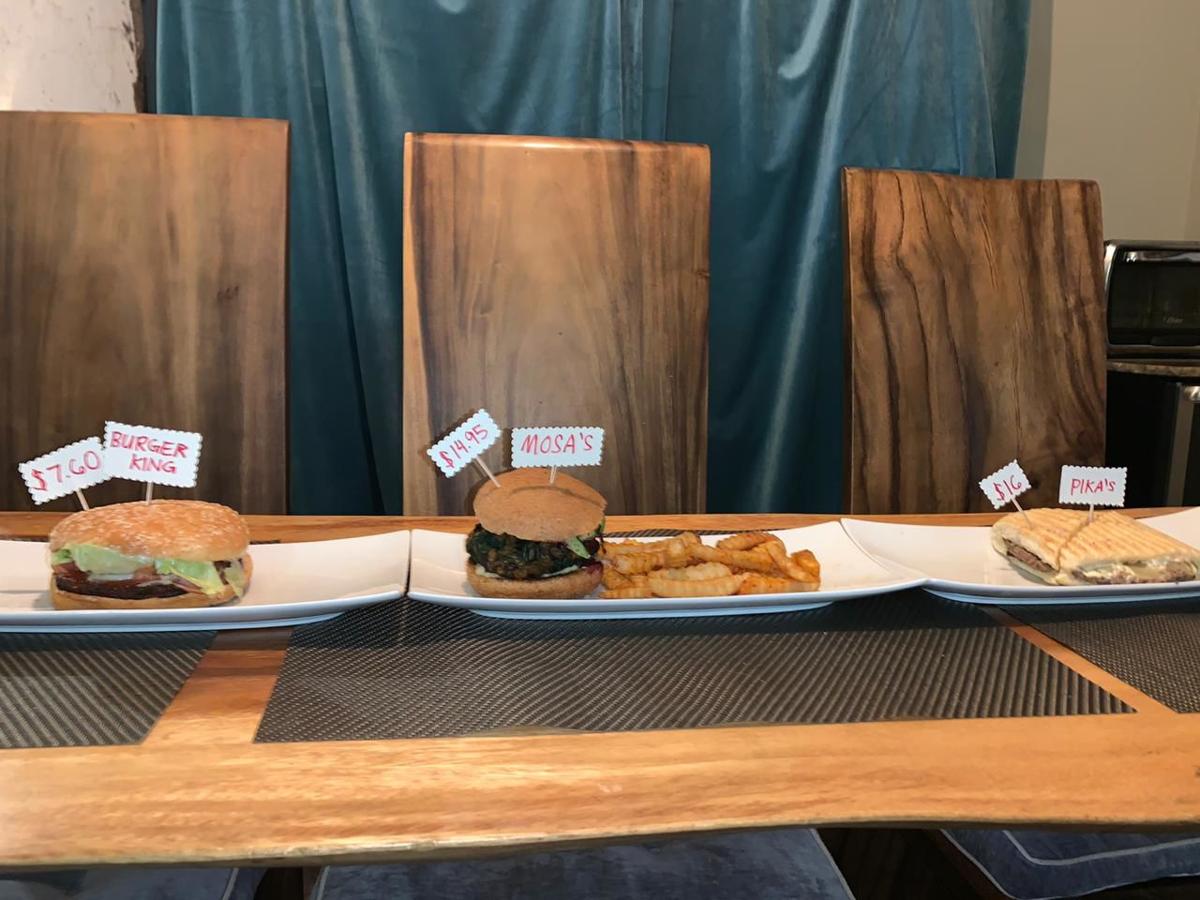 A DIFFERENT PERSPECTIVE: Burgers, from right, from Pika’s Cafe, Mosa’s Joint, and Burger King serve a growing population of vegetarians and vegan eaters on Guam. The Scoop

BURGERS?: Burgers, from right, from Pika’s Cafe, Mosa’s Joint and Burger King serve a growing population of vegetarians and vegan eaters on Guam. The Scoop

A DIFFERENT PERSPECTIVE: Burgers, from right, from Pika’s Cafe, Mosa’s Joint, and Burger King serve a growing population of vegetarians and vegan eaters on Guam. The Scoop

As vegetarianism and veganism gain popularity, some of Guam's restaurants have added meatless options to their menus.

More teens are also trying to explore meatless choices with more celebrity role models to look to, including Joaquin Phoenix, the star of the wildly popular film “Joker,” and world-famous singer Billie Eilish.

Pika’s Cafe, Mosa’s Joint and Burger King are among them. Grocery stores are also expanding their product offerings for those who want to do away with animal meat.

With changing palates also influencing island youth, some of The Guam Daily Post's teen journalists in the Scoop program did a taste-test on some products available locally.

Priced at $16, Pika’s Cafe created the “Impossible Burger,” which is a vegetarian alternative to regular local burgers on the cafe's menu.

In regard to price points, it is the most expensive of the three, which is a surprise, but it is also the most filling.

It didn’t seem like a burger; it looked and tasted like a fancy panini. The bread was good, but the burger was a little greasier than I usually like.

When I first took a bite of the “Impossible Burger,” it’s true, I didn’t think it was possible. The amount of cheese and the quality of the burger amazed me.

I thought to myself, “How can this possibly be vegetarian? It’s too good for that.”

I was simply enticed at how well made a supposed “healthy” option was, but after a few bites, the “Impossible Burger” caught up to me.

Its cheesy bites were starting to fill me up – fast. And even though I was sharing with two other people, the portion I was given was too much for me to finish.

Fast-forward to 30 minutes after trying the burger, I realized, “that was such a heavy portion of the burger.”

When going for the “Impossible Burger” at Pika’s Cafe, bring a friend or someone who can share this surprising vegetarian option with you.

Mosa’s Joint offers a vegan burger with fries or a salad included for $14.95 as a healthy, meatless and dairy-free option for burger lovers.

The burger was filling and came with plenty of fries or a sizable salad.

The vegan burger was not trying to be something it wasn’t or to masquerade as meat. It was proudly a bean-based burger that you had no doubt was meatless.

The burger was extremely healthy. It's not as greasy or as fatty as many of the traditional burgers tend to be. More importantly, my stomach was safe from an experience similar to Pika’s burger.

The flavor and texture were extremely enjoyable to me, although the two others trying the burger with me objected heavily to my opinion. While I enjoyed the fact the burger did not at all resemble meat, my fellow critics disliked this.

This burger was extremely good despite the limitations it faced, not even having cheese. It was creative and had interesting flavors, varying from the typical tofu substitute with its bean patty.

This burger became a favorite of mine. Vegans, vegetarians, or people concerned with healthy eating will likely appreciate this burger.

I have never tried a veggie burger or anything of the sort so this experience was the first time for me. I was nervous to try it and expected the worst, but I was proven wrong.

When I bought the Impossible Whopper, I was expecting it to be less than it actually cost which is $7.60. At first sight, it didn’t look any different from a regular burger. The patty looked deceptively like meat and I first thought that it was. Every other aspect of the burger, such as bread and lettuce, was the same as Burger King's other Whoppers, except that there was no sliced cheese because I wanted to keep it as close to vegan as possible. If you would like to keep it healthier and more vegan, skip the mayonnaise.

I was anxious when I was about to take the first bite. I kept thinking that it would have a strong vegetable taste. Surprisingly, it didn’t taste like that. It was a healthier version of a Whopper, which ultimately is the goal of an Impossible Burger. Unfortunately, the patty was a little dry, but it stayed together unlike other veggie burgers I’ve heard of.

Although I was surprised at the price, it is lower compared to other Impossible Burgers on the island. For people who want to eat healthier on a budget, this burger is definitely for you.