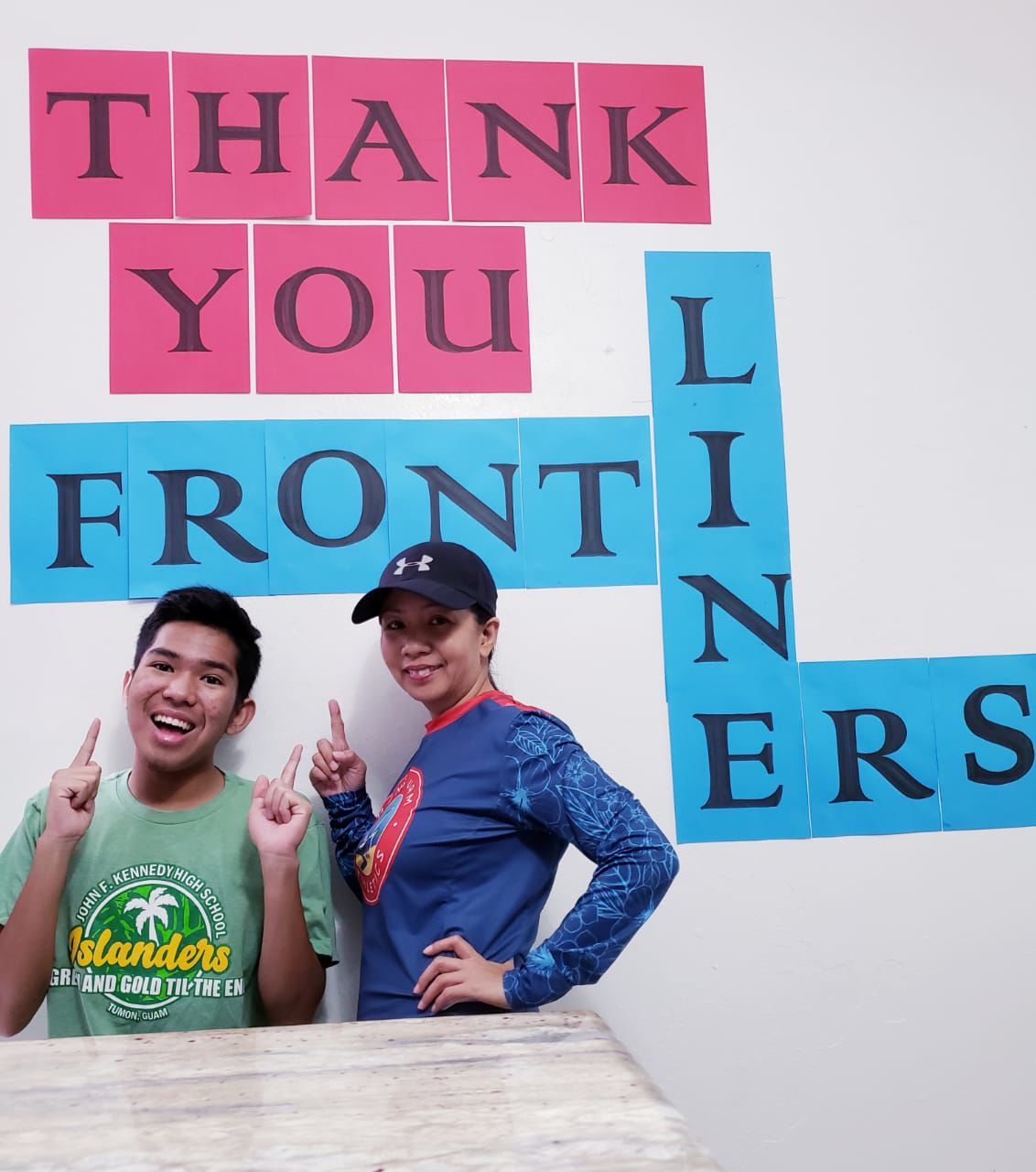 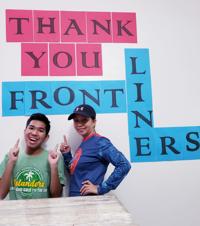 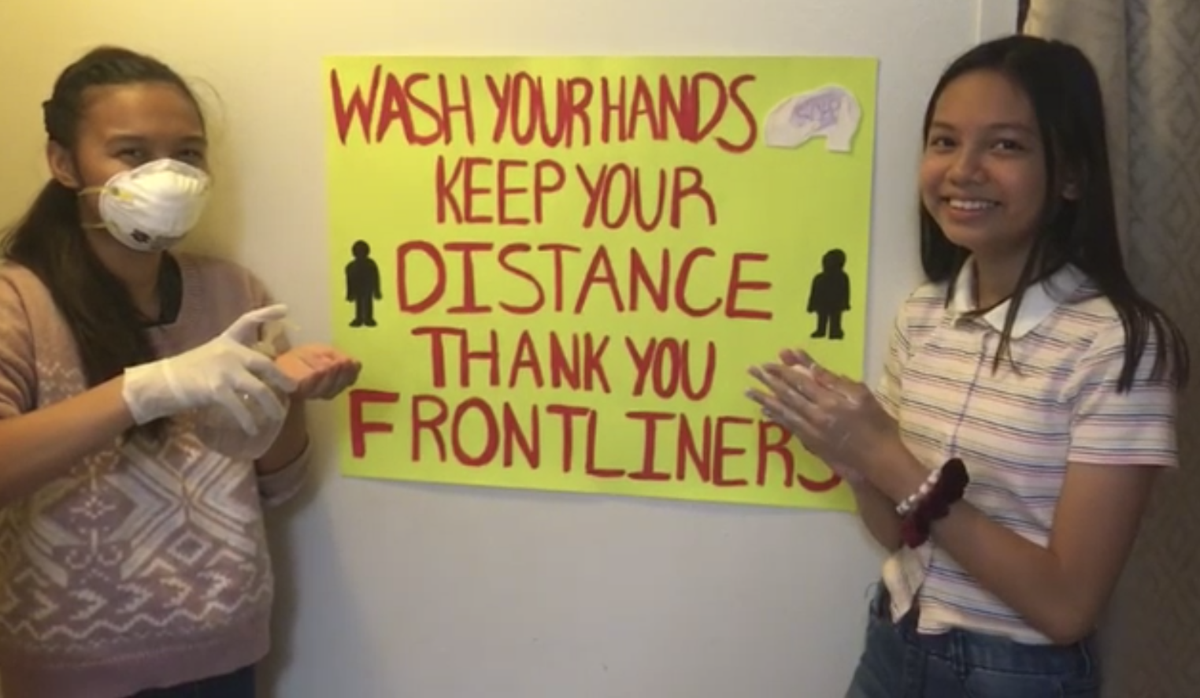 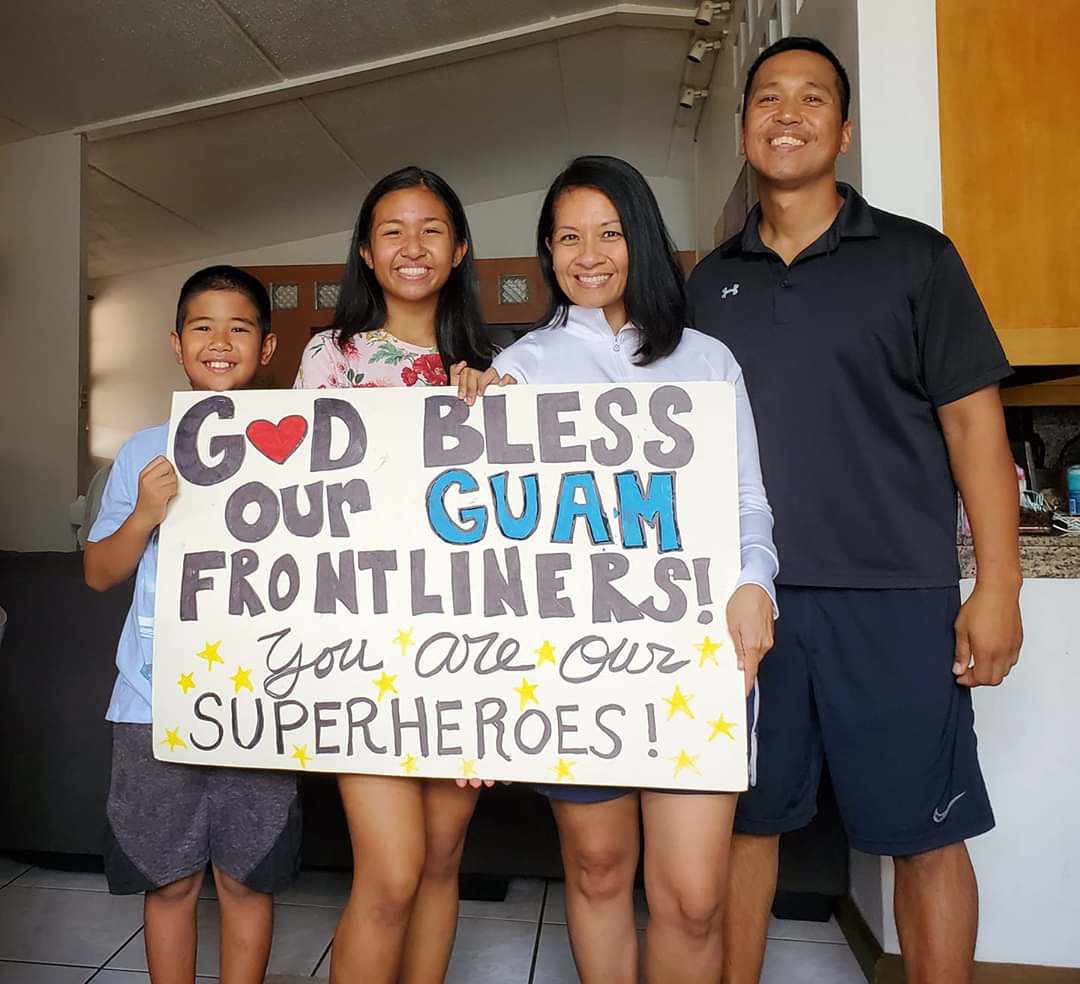 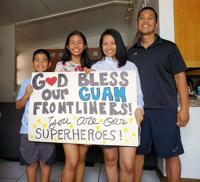 UNITED SUPPORT: The Andres family sends a thank you to health care providers and others working on the front lines. The message is part of a community effort to boost the morale of those continuing to work through the COVID-19 crisis on Guam. Pictured from left are Jace, Maya, Gretchen and Angelo Andres. Photo courtesy of the Andres family 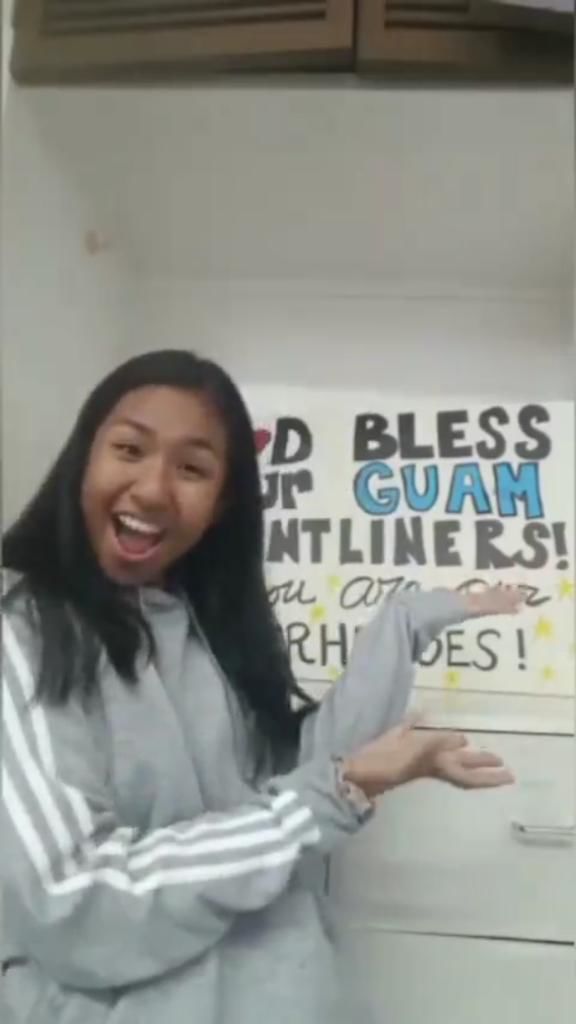 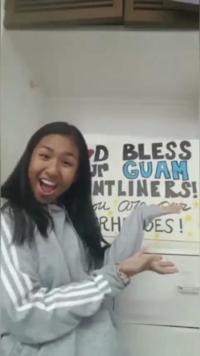 UNITED SUPPORT: The Andres family sends a thank you to health care providers and others working on the front lines. The message is part of a community effort to boost the morale of those continuing to work through the COVID-19 crisis on Guam. Pictured from left are Jace, Maya, Gretchen and Angelo Andres. Photo courtesy of the Andres family

It was a Friday, nearly two weeks after the governor had ordered schools shut down, when inspiration came to Maya Andres.

The John F. Kennedy High School freshman was online scrolling through Instagram and YouTube when she thought perhaps she and her friends could do something to show appreciation for those working to keep our community going through the COVID-19 crisis.

"I felt that most of us ... were stuck at home and there are other people outside who are trying to help, and we should support them," Andres said.

People around the world are in situations similar to Guamanians – everyone trying to do their part to stop the spread and "flatten the curve."

Andres saw videos of people around the world, sharing messages of comfort and encouragement as they did their part to stop the spread of COVID-19 in their own communities.

Here at home, Gov. Lou Leon Guerrero ordered the shutdown of local schools and government agencies beginning March 16. The exceptions included nurses and doctors, police officers and others whose primary functions were health and safety or those who provide them direct support.

That order was followed a few days later by an order for most businesses. Again, there were exceptions for those critical to our community, such as grocery stores and distributors, gas stations and banks.

From the government of Guam to the private sector, there were many people who, because of the essential services they provided, continued to go to work.

"So I found the song and ... reached out to some friends," Andres said. "I was surprised because they were so excited to do it and that made me more excited to do the video. ... I guess we just thought that the people who are helping our island should be recognized, and we wanted to share the message that we really appreciate their work and what they're doing for us."

More than 20 of her friends wanted to help, she said. And she asked them to come up with their own messages of thanks.

"I just asked them to share what they wanted to say to the community."

What Andres didn't realize was many of her friends have parents or siblings who are among those out working.

"It was also a way for them to say they're grateful for their siblings or their parents. ... So some of the messages were personal for them," she said.

With about 25 to 30 people sending videos, she said she wasn't sure her not-so-fancy Android could do the job of compiling and editing clips for what ended up being a five-minute video.

"I was scared my phone was going to crash," she said. With a little sigh of relief, she added: "But it came through."

A little help from her friends

It took about 2 1/2 days to complete the video – from sharing the concept with her friends to editing the final product.

"A lot of people said it was really nice. ... Some of them said it made them cry or tear up," she said.

Andres said many of her classmates were glad they decided to be a part of it.

"They felt it made a difference ... and I just really want to say thank you to all of my classmates. It wouldn't have come out as great as it is if it wasn't for their help."

The final compilation includes photos of students offering messages of thanks to all who continue working, with some Islanders lip-syncing to a cover of Michael Jackson's "Heal the World."

The freshman said if there's one thing she and her classmates have learned these last few weeks, it's that not only are there "bigger things and bigger problems out there" than many people realize, but there are many people who do a lot for this community.

"It makes us more grateful for what we have right now and ... it teaches us that ... we shouldn't take anything for granted," she said.

Ivan Aguilar, president of of the JFK class of 2023, said for him the project was a great way to lift spirits.

"I was surprised to see some people in the video ... and I hope this encourages all students to participate more," he said.

He was among those students whose message of community and support came from experience. He has several family members on Guam and in the mainland who are health care professionals.

"They're risking their lives and risking their own health to help others," he said, noting one of his uncles couldn't see his family for weeks because he had to be quarantined after spending weeks working.

He said if there's one message he hopes people get out of the video, it's that people understand "that even though they're not out there in the field, they can send a message of thanks and appreciation for those who are out there."

He added his own appreciation for his classmate: "This video was Maya's idea and she did all of the editing work ... and it really helped bring a lot of students together and lift our spirits."

'Our island's strength and perseverance'

Dad and JFK class of 2023 head adviser Angelo Andres is understandably proud of his daughter Maya and shares Aguilar's appreciation of her efforts.

"She had worked on a video project with the class to commemorate their freshman year at JFK to include our current COVID-19 situation. When she was done with that, she wanted to make a more direct statement given that her aunts and uncle are in the medical field," Angelo Andres said.

"My wife and I are very proud of her efforts. Even more so because she had no clue how to edit prior to working on the first video and she was using her phone, which was not your top-of-the-line phone."

Andres said he was glad his daughter was also able to get "support from fellow officers and class members to be a part of spreading positivity and hope" during this challenging time.

He added, "I am sure the message will reach the community and will serve as a reminder of our island's strength and perseverance."