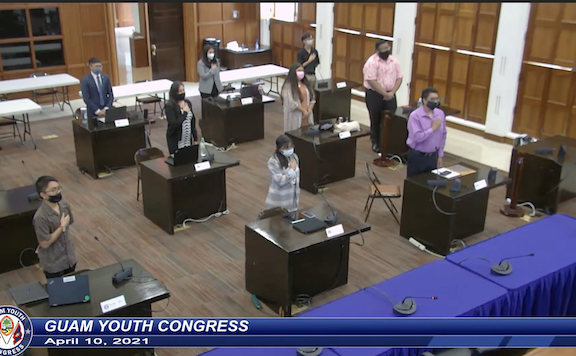 RESOLUTION: Representatives of the Guam Youth Congress sing the national anthem at the start of session on April 10. The young legislators passed a resolution stating their opposition against a bill being considered by the Guam Legislature that would lift the restriction on silencers for guns. Guam Youth Congress video screen grab 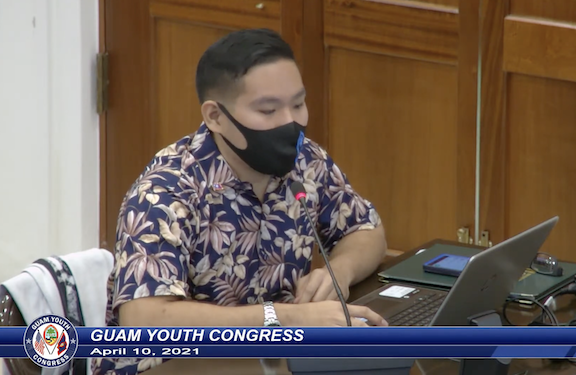 RESOLUTION: Representatives of the Guam Youth Congress sing the national anthem at the start of session on April 10. The young legislators passed a resolution stating their opposition against a bill being considered by the Guam Legislature that would lift the restriction on silencers for guns. Guam Youth Congress video screen grab

The Guam Youth Congress is standing in opposition of legislation that would make legal suppressors or silencers on firearms.

The young legislators on April 10 passed Resolution 9-33, which was introduced on April 7 by Reps. Chloe Lizama and Nolan Flores, and Vice Speaker Al Edrich Labang.

"The increasing gun violence throughout the continental United States should be reason enough for the loudness of guns to not be minimized or silenced, and instead made recognizable," the resolution reads in part. "By making gunshots harder to hear or see, silencers diminish the effectiveness of law enforcement and gunshot detection systems."

The resolution includes various instances of gun violence across the U.S. and Guam.

"On June 14, 2019, the Virginia Beach shooter killed 12 people at the municipal building using a silencer; and a survivor of the mass shooting states that if a suppressor hadn't been used, employees within the building could've had more time to protect themselves," the resolution continues. "A catastrophic mass shooting should be a great reason why mufflers, silencers, or devices for deadening the sound of discharged firearms should be prohibited; and be it further."

Labang said there have been a number of instances where people have utilized their right to bear arms to deprive others of their lives.

"Silencers again may not be used in these incidences but the sound of guns may help others escape the violence and keep themselves safe," he added.

"As a future teacher of this island, I want my students to worry about what is on the curriculum and not for their safety."

On the vote, there were 13 ayes, 0 nays, and the Youth Congress had 11 excused absences.

Their discussion and vote followed a few days after the 36th Guam Legislature held a public hearing in which most of the testimony was in favor of Bill 73-36. Despite the support, some lawmakers did levy concerns about how that might affect public safety on Guam.

"I Liheslatura further finds that suppressors are legal in 42 states and all but two of these states (Connecticut and Vermont) allow their use for hunting," Bill 73 states. "There are three main reasons people own suppressors and silencers: reduction of noise pollution, hearing protection, and safety training."

The Guam Legislature has yet to go into session, which is when Bill 73 can be discussed and voted on.

The Scoop asked Krystal Paco-San Augstin, governor's director of communications, what thoughts the governor had on the bill.