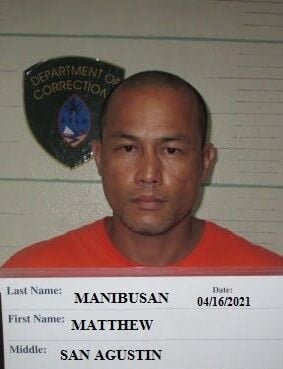 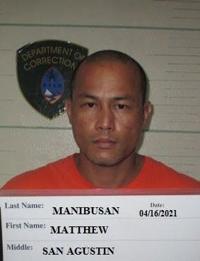 Matthew San Agustin Manibusan was arrested by police on suspicion of murder. He is accused of shooting Joshua Meno on Thursday. Meno's body was discovered by a passing motorist on the side of the road. 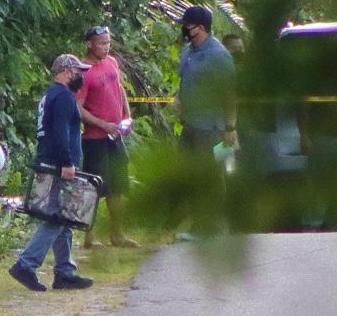 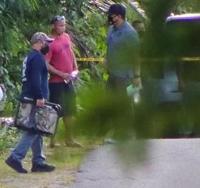 Matthew San Agustin Manibusan was arrested by police on suspicion of murder. He is accused of shooting Joshua Meno on Thursday. Meno's body was discovered by a passing motorist on the side of the road.

Police have arrested a man with a violent criminal history on suspicion of murder in the death of Joshua Meno, 25, who was found on the side of the road on Swamp Road in Dededo on Thursday.

He was arrested on charges of murder, aggravated assault, use of a deadly weapon in the commission of a felony, unlawful discharge of a firearm, possession of a firearm without valid identification, unsworn falsification, and reckless conduct.

The Guam Daily Post captured a picture of Manibusan at the scene of the crime on Thursday. He was seen speaking with a Guam Police Department officer.

Police records indicated that he resides on Swamp Road.

According to a release from GPD spokesperson Sgt. Paul Tapao, while police were investigating what led to Meno's death, Manibusan was identified as a person of interest.

Tapao said that Manibusan was brought to the GPD Tiyan headquarters and interviewed. Detectives were able to locate and confiscate a gun that was believed to be used in the incident.

Manibusan was arrested at 5:20 a.m. Friday., and confined at the Department of Corrections, according to arrest records.

This is not his first time at DOC; he has a lengthy criminal record dating back to 2002.

In 2002 he was arrested for assault, family violence, and terrorizing. He has been in and out of jail since then on similar charges.

In 2014, he picked up a motor vehicle theft charge, followed by another case involving stalking the same year. And a theft-related charge in 2015.

In 2017, he was charged with carrying and possessing a concealed firearm without a valid firearms ID.

In 2018 he was accused of strangulation, assault, and family violence.

That year he was committed to DOC and served two years; he was released in May 2020.

He has had several bench warrants issued for his arrest over the years for court violations.

Meno's lifeless body was spotted by a passing motorist Thursday afternoon; he was laying in the brush, just feet from the road.

Meno's death is a massive blow to his family, who are still reeling from Meno's brother Justin's death.

Justin was incarcerated in the Department of Corrections maximum security unit in 2017 when he was found hog-tied and severely beaten. He was in a coma for two months and later died of a tumor.

That assault case was halted in its tracks when the charges against the suspects were dismissed without prejudice. The government said the dismissal was a result of pending DNA test results from the FBI.

It's been four years since the crime, and no one has been held responsible since the dismissal.