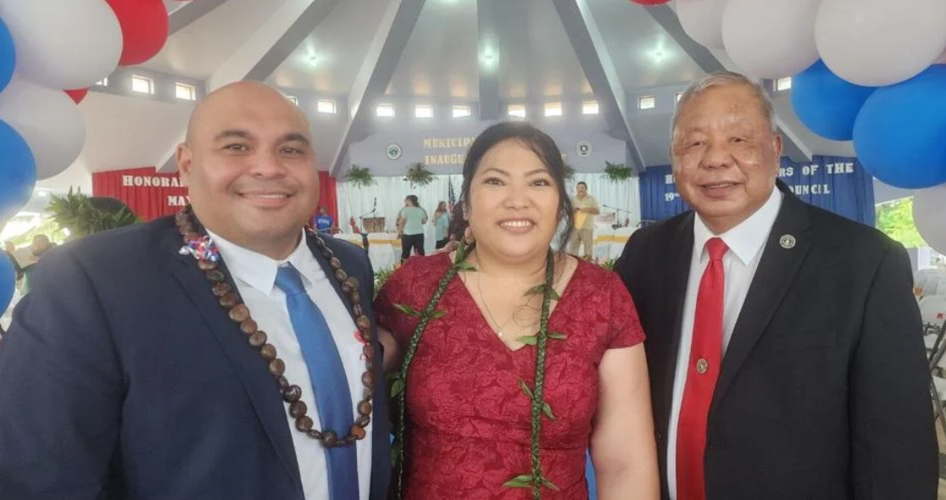 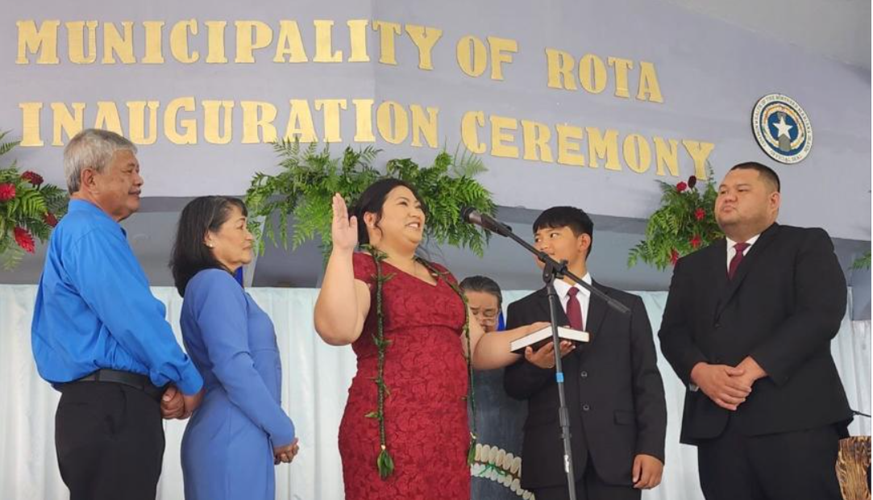 Hocog, 35, was first sworn in on Saipan on Jan. 9 at the CNMI Supreme Court. Chief Justice Alexandro Castro administered the oath of office on both Saipan and Rota.

In her inaugural address, she said that it has been her dream, since she was a girl, to stand before her community and be sworn into office.

“Seeing this dream become a reality is one of the greatest accomplishments of my life. I will serve to the best of my ability to ensure and promote the general welfare of our people,” she said.

Speaking to reporters, Hocog said, “I am just so humbled and so thankful to our people of Rota for giving me this honor and this privilege to serve them. I vow to work hard with our Rota legislative delegation, our municipal council, and our … Honorable Gov. Arnold I. Palacios and Honorable Lt. Gov. David M. Apatang to really help provide a plan (and serve) our people.”

As the CNMI’s first elected female mayor, she said “it is such a great honor. I hope to continue to work alongside the other newly elected leaders for the Commonwealth. … I hope to work and collaborate with them to see not only how we can help (improve) Rota, but the Commonwealth as a whole.”

Given the current state of the CNMI’s finances and the high cost of living on Rota, Hocog said, “We have a lot of very creative people who already have ideas that can help us work with our business community to reduce the cost of living here because our people deserve better. And we cannot afford to continue to live in this manner.”

She said that the people of Rota are fortunate to be able to fish, farm and hunt - skills that were passed down to them by their parents.

“But we’re hoping that we can find other means to help reduce the cost of living here on our beautiful island of Rota,” she added.

Numerous dignitaries were present for the inaugural ceremony at the Rota Round House on Saturday, including Apatang and Rota’s lawmakers, Sens. Donald Manglona, Paul Manglona, Dennis James Mendiola, and Rep. Julie Marie Ogo.

In her inaugural address, Hocog asked all of the elected Rota officials to stand as a show of unity.

“We will be the leaders of this municipality. It is my hope that this is a new start of a great partnership with our delegation to generate ideas and plans to build a better road that will preserve our cultural identity, as well as modernize our communities to adapt to the ever-changing technological world that we live in,” she said.

“Our islands have gone through many hurdles, supertyphoons, and a global pandemic that has affected our economy and our livelihoods - which forced us to create a new set of standards for living.

“I truly believe in my heart that we have intelligent, talented and creative people. Residents here on our beautiful island who, if given the proper guidance, training and resources and, led in unison by our leaders, will, together, generate a plan that embodies shared common goals that our island, once again, prospers,” she said.

Hocog said Rota also welcomes the military and investors to partner with the island’s stakeholders and generate a plan that is conducive to the best interests of the people of Rota, while preserving the natural environment and protecting cultural practices and beliefs.

“We can do this together,” she said.

“The responsibility of being a public servant will not be easy, but I firmly believe that by working together with our leaders and my Cabinet members, we can be able to push forward and progress on island to a place that our future generation can be proud of,” she added.

Hocog extended her gratitude to her family, friends, the CNMI Republican Party, the outgoing and the newly elected administrations, the inaugural committee, the people of Rota and the people of the Commonwealth.

“This was a great ceremony today,” Apatang said. “I want to congratulate the people of Rota for electing the first female mayor. And I’m looking forward to working with the mayor for our people of Rota and also the whole Commonwealth. She gave a very good speech today, and I’m very proud of her and her family. … Congratulations to the mayor and I look forward to working with her.”

“Not only do we have tourism, but we have a common bond. We’re one people. We have environmental issues that affect both of us. We have issues with regards to global warming and climate change and, of course, we’re all going to be impacted by the expanded military buildup. So, there are a lot of things that we need to do in the normal course of our work to make sure that we bring each other up. I think that’s the whole point. When we’re vibrant, everyone else is vibrant. It’s the same thing. So, I think it’s very important for us to all be together,” said Tenorio.