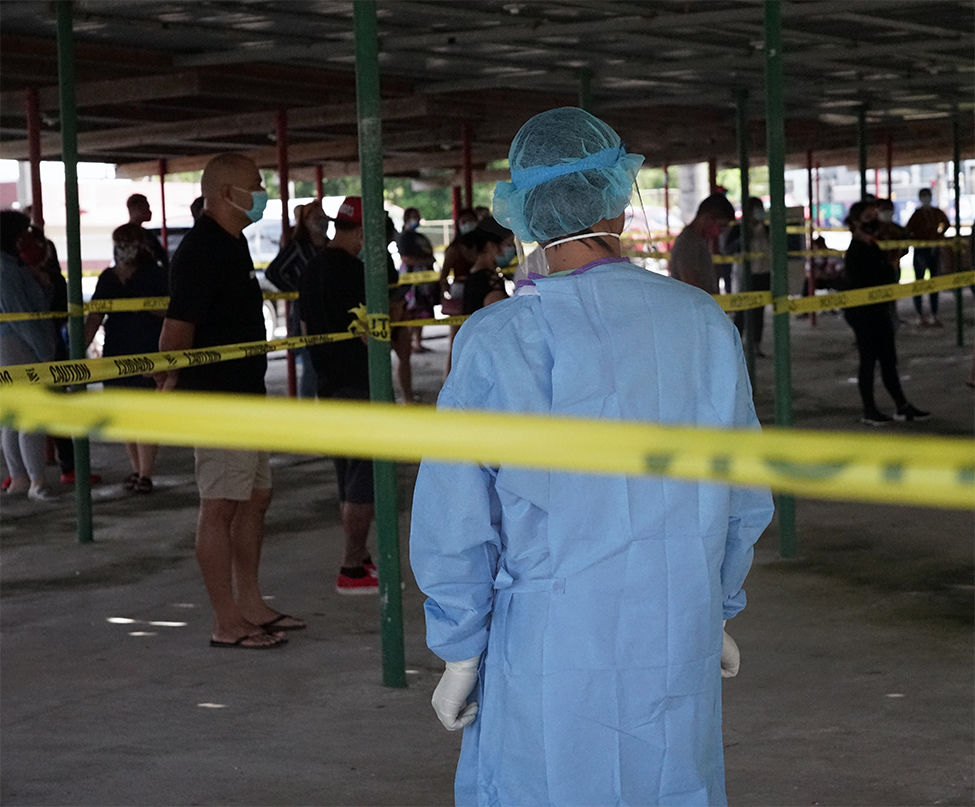 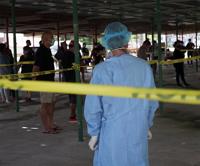 RISING NUMBERS: A nurse does a quick head count before conducting more rounds of testing at the lot of the Mangilao Night Market on Tuesday. Haruo Simion/The Guam Daily Post

RISING NUMBERS: A nurse does a quick head count before conducting more rounds of testing at the lot of the Mangilao Night Market on Tuesday. Haruo Simion/The Guam Daily Post

Another 12 people were confirmed as the newest COVID-19 cases on island, according to the Joint Information Center on Wednesday.

That means Guam had a total of 87 active COVID-19 cases and that number could grow as the Department of Public Health and Social Services continues its mass testing. There have been a total of 271 confirmed cases of COVID-19, with five deaths and 179 who have been released from isolation. Forty-six are military service members – 35 of whom have been identified among a unit deployed to Andersen Air Force Base.

Another mass testing is available for free from 9-11 a.m. today at the Yigo gym.

The last mass testing for the community was held Tuesday at the area near the Santa Teresita Church in Mangilao where the line of cars wound up the hill on Route 10 into the road to Guam Community College and around the curve to the Ladera Towers.

Given that the Fourth of July holiday weekend will likely mean families and friends gathering, Dr. Felix Cabrera urges residents to take precautions.

“In addition to the usual precautions we hear every day regarding frequent hand washing, social distancing and wearing face mask, it is worth reminding people to avoid touching others,” he stated. “This is especially important between family members and friends who don't live together but may see each other in public or visiting. No kissing on the cheeks, even though you're both wearing a mask. Yes, I've seen this often in public. No shaking hands or hugs, too.”

During the last COVID-19 briefing at Adelup, Gov. Lou Leon Guerrero said the increase in confirmed cases is expected as more people are tested. She and Dr. Cabrera, who leads the governor’s medical advisory group, said there’s also a concern that the most recent cases aren’t part of a cluster.

Cabrera explained why this is cause for concern.

“A cluster is defined as several individuals who have a clear link tracing them to each other as primary contacts through successful contact tracings,” he stated.

“Best example of this was back in late May when there were 10 positives coming from a multifamily compound. In this cluster situation you have a better chance of isolating and containing the coronavirus. Compare that to a situation like now, when you have more than 15 individuals with no obvious contact link.”

He did note that with further contract tracing they might find the link through work or a community event.

“But for now, compared to a cluster discovered early, it is even more unclear how much has already spread and how much more is needed to identify all primary contacts to be monitored, isolated and/or tested,” he stated.

In June alone, there were 87 positive cases – more than 60 were confirmed in the second half of the month. The Guam Daily Post asked if this was an anomaly or if it could be linked to a cluster or specific action.

“Statistical anomalies are basically defined as chance showing itself in a peculiar way that may not seem like chance at all. When dealing with data behind COVID-19, our actions must responsibly err on the conservative side, which in this case means treating this spike as true – especially when there is no other good reason to believe otherwise,” Cabrera stated. “These are not completely randomized sampling of Guam's population, therefore there are likely links and patterns that the contact tracing team must dig deep to pursue, and do so quickly.”

Cabrera said the spike could be related to the "cluster" of active-duty airmen who tested positive in the second half of June.

“We also know that they have broken quarantine. To be clear, so far DPHSS has not reported contact tracing links between the two groups as of this time,” he stated. “Another temporal relationship to consider is with these cases coming a few weeks after the change in quarantine rules on June 8. It resulted in more restrictions on some travelers, but it also did liberalize the use of home quarantine for many – especially those coming from stateside. This is in part why we had decided to now include objectively specified states as high risk areas in the July 1 changes.”