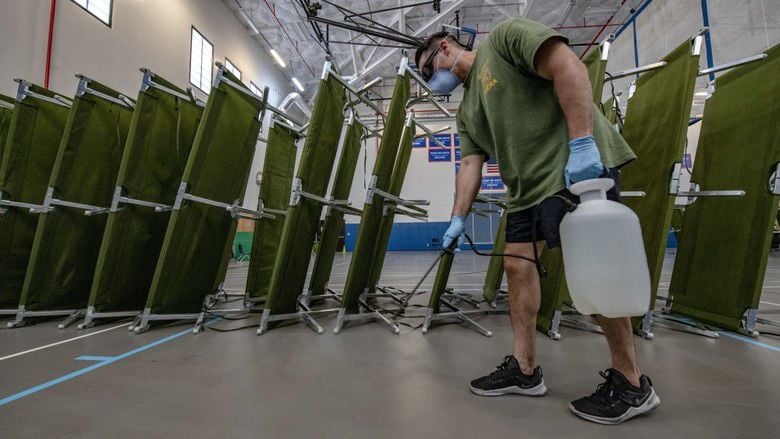 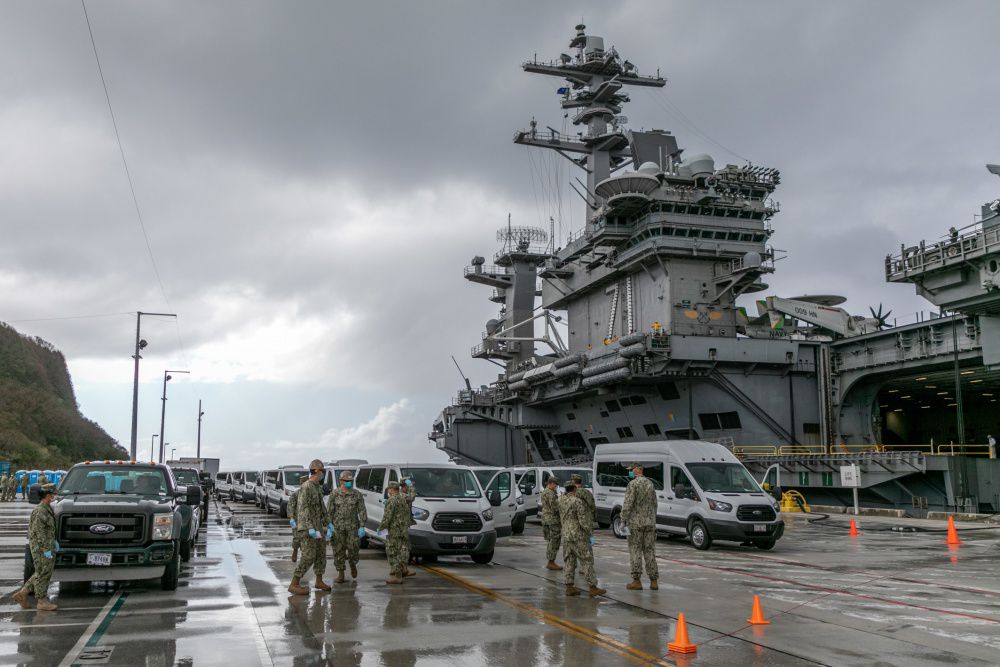 TRANSFER: On Friday, April 3, Seabees assigned to Naval Mobile Construction Battalion coordinate the transportation of sailors from the aircraft carrier USS Theodore Roosevelt, which is docked on Naval Base Guam, to hotels in Tumon Bay for a 14-day quarantine. U.S. Navy photo by Chief Mass Communication Specialist Matthew R. White

TRANSFER: On Friday, April 3, Seabees assigned to Naval Mobile Construction Battalion coordinate the transportation of sailors from the aircraft carrier USS Theodore Roosevelt, which is docked on Naval Base Guam, to hotels in Tumon Bay for a 14-day quarantine. U.S. Navy photo by Chief Mass Communication Specialist Matthew R. White

Of the roughly 4,845 sailors aboard the USS Theodore Roosevelt, 92% have been tested for COVID-19 since the San Diego-based aircraft carrier arrived on Guam in March.

A total of 585 sailors tested positive, according to Rear Adm. John Menoni, commander of Joint Region Marianas on Monday.

“That’s a significant amount of sailors,” said Menoni. “My primary mission is to help get TR sailors healthy and get them back out to sea.”

Menoni declined to release the conditions of those sailors who tested positive, along with the two who were hospitalized at Naval Hospital Guam last week.

“I am going to respect their privacy and the privacy that their families demand, and I am not going to talk about their specific medical conditions,” he said. “They are getting very focused medical care at this time.”

As of April 13, more than 3,700 sailors have tested negative, and Menoni said upward of 4,000 sailors have since been taken off the aircraft carrier and placed in quarantine sites on Naval Base Guam and in hotels in Tumon.

“Now we have the social distancing capacity needed for the health and recovery of the crew,” he said. “We can more efficiently continue our next phase of the operations, which includes deep cleaning and sanitization of the ship.”

The commander said there was one sailor who tried to escape from the quarantine site off-base.

“There was a break of a quarantine in one of the hotels. That sailor, as I committed to the governor and the community of Guam, was pulled from the hotel. It was all internal to the hotel,” he said. “That sailor was taken back to Naval Base Guam with all the evidence from the investigation that ensued and turned over to the command for further investigation and any possible consequences from that.”

Only sailors who tested negative and are asymptomatic are allowed to be placed in the quarantine sites away from the Navy base.

He declined to say if any of the sailors who are in quarantine in the hotels have since developed symptoms or tested positive for the virus.

Menoni added that two active-duty service members have also tested positive; however, he declined to specify which military unit or the base in which those confirmed cases were reported.

Plans are in the works for the military to provide additional medical support and staff in the future, he said. At present, there is no clear timeline as to when that could occur.

Menoni said all the sailors in quarantine will be retested and cleared before being allowed back on the ship.

“This virus is a serious enemy and it threatens to undermine both our mission and endanger all of us on Guam and in the CNMI. Working together, we will win this fight.”