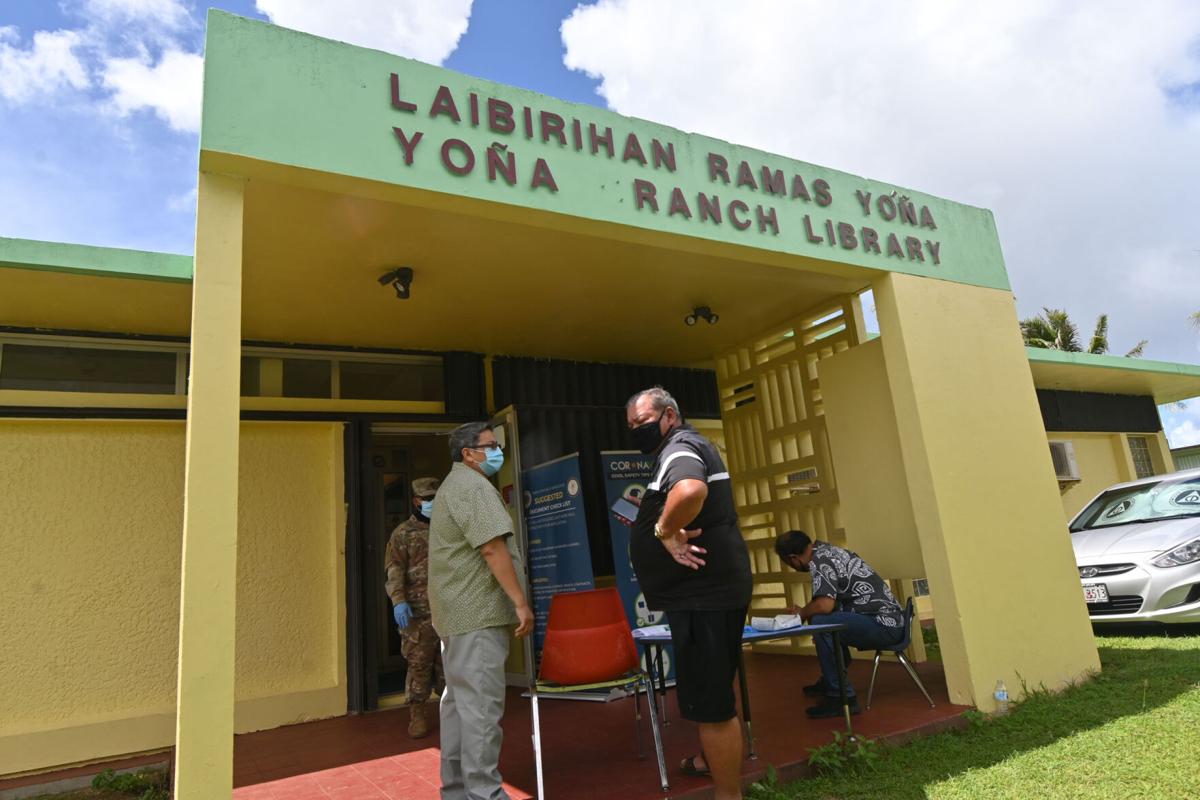 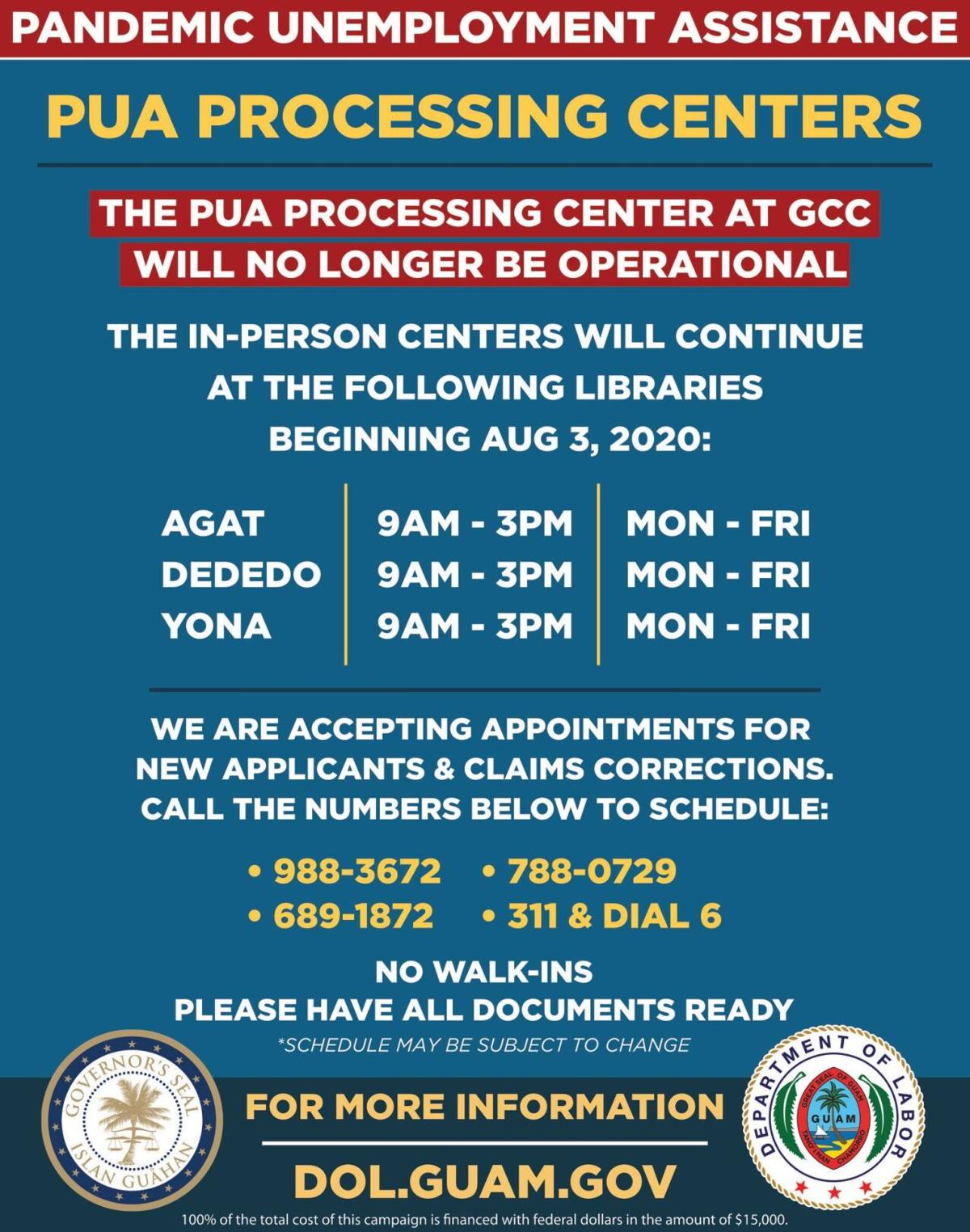 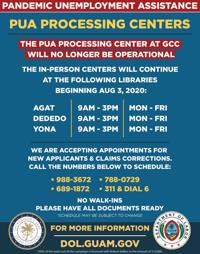 If you want to file an unemployment claim or have issues with your existing claim, call these numbers and make an appointment. For Agat and Yona public libraries, the PUA staff can assist you as a walk-in client if there is no line.

If you want to file an unemployment claim or have issues with your existing claim, call these numbers and make an appointment. For Agat and Yona public libraries, the PUA staff can assist you as a walk-in client if there is no line.

Guam Labor Director David Dell'Isola on Thursday said the release of nearly $60 million in unemployment benefits has been moved to next week, mainly because of fraudulent claims.

This is an increase from the initial $54 million that the local Labor Department was supposed to release this week.

Next week's release will cover cleared claims filed through July 8.

Additional local unemployment claims were cleared, after they were caught in the fraud measures, Dell'Isola said.

"I feel there may still be some local claims caught in the net but wanted to get this out," he said.

Pandemic Unemployment Assistance payments should be able to reach workers' bank accounts or mailboxes by Tuesday or Wednesday.

Because of different bank and post office schedules, unemployment claimants could get their benefits days later.

Labor has noticed in recent weeks a spike in questionable claims, mostly from outside Guam, and these have been holding up the process for legitimate claims from those on Guam.

As of Thursday, 35,468 employees on Guam were laid off, furloughed or got work hour cuts as a direct result of the COVID-19 pandemic.

This is based on the reporting of 2,024 employers on Labor's portal, hireguam.com.

But the total initial claims filed as of Thursday reached 38,745, which is higher than the actual number of displaced workers.

That discrepancy, according to Labor, is a result of fraudulent claims, as well as the self-employed who have also filed claims but were not part of the separation notices data.

While some workers were surprised to learn of new payment dates, they said they're thankful that there's at least something to look forward to, which would help them financially survive the pandemic.

"I understand why it is being done. The director is taking extra measures for the long term. If he doesn't do the extra fraud measures, hackers, fraudsters and embezzlers may get their hands on millions of money intended for PUA," Jolyn Acfalle, 38, said. "It is frustrating, yes, but what the people must realize is that the unemployment funds are a privilege, not a right."

Acfalle is among those waiting for their first PUA payment, which has had multiple payment date changes since July 14. There were banking information errors, she said, "but everything now is in order."

"I will not just sit back and feel defeated as I wait for the funds to be released. If I must find items to sell on Facebook sell groups, I will. If I must reach out to family more fortunate than I for help, I will," she said. "It is about taking responsibility."

She continues her job hunting. She has six children about to begin school.

Catalina Roldan, whose last paycheck was April 1 because of the COVID-19 pandemic, said she's thankful she got her first PUA payment so she could pay her piled-up bills. She's now waiting for her weekly claims.

"We are helpless," she said, worrying about additional bills and rental payment, and two children to feed.

Roldan said she's been trying to get a new job but it's been difficult at this time.

Dell'Isola requested a $924 million budget for Guam's pandemic unemployment program, of which $276 million in initial allotment was released.

Once Guam Labor releases the nearly $60 million in PUA payments next week, there's not much left of the initial allotment from the U.S. Department of Labor.

"USDOL is working on getting us an allotment," Dell'Isola said.

Any COVID-displaced worker who's planning to file a new PUA claim or has a problem with his existing claim can now proceed to the Agat or Yona public libraries as walk-in clients.

Previously, PUA clients were required to make an appointment to be seen at the Agat or Yona libraries.

"Those two aren’t busy so we’ll take them immediately or give them an appointment – if the line is too long – to come back soon," Dell'Isola said.

The Dededo library, which has been busy with clients, is requires an appointment.