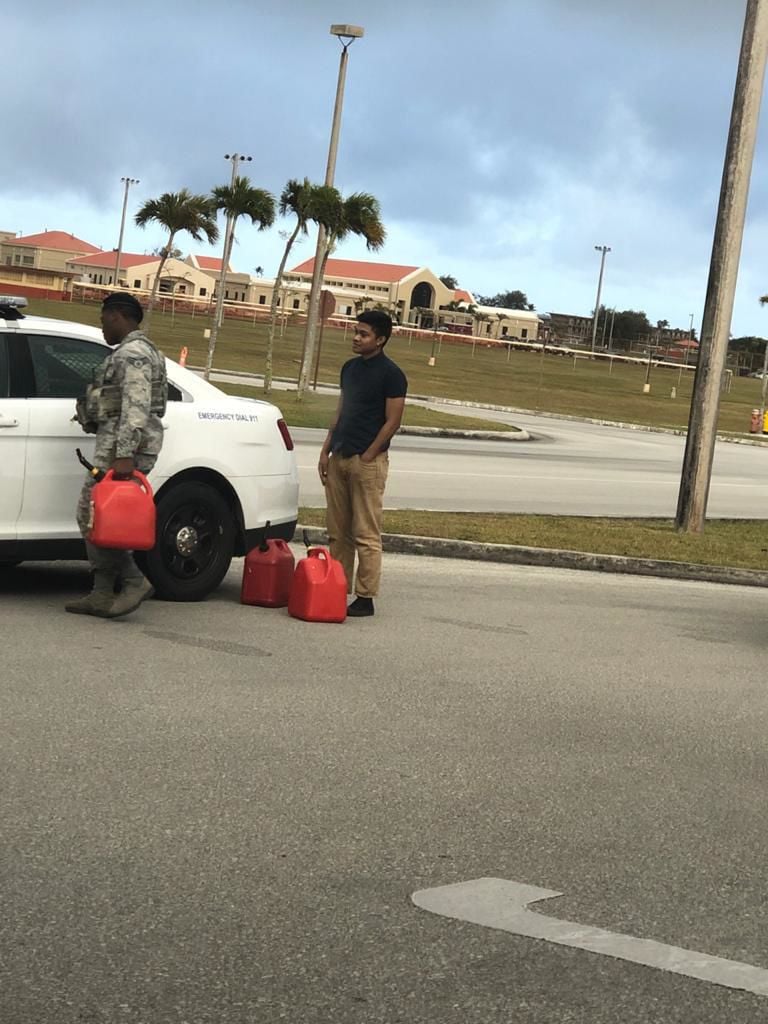 TRYING TO BUY GAS: A Guam National Guard member who wasn't on active duty was seen earlier this week on Andersen Air Force Base after making his way to the gas station and filling a few containers of gas. Contributed photo

TRYING TO BUY GAS: A Guam National Guard member who wasn't on active duty was seen earlier this week on Andersen Air Force Base after making his way to the gas station and filling a few containers of gas. Contributed photo

Navy Rear Adm. John Menoni, commander of the military's leadership on Guam, released a letter to the public Friday following public criticism of the decision to limit most National Guardsmen, reservists and veterans to shopping on base exchange stores and commissaries only on Saturdays and Sundays while the island is under a public health emergency. Exempted from the limitation are guardsmen and reservists on active-duty status.

The base stores are also instituting a general limit on certain items.

Menoni's letter reasoned that the decision – limiting veterans' and most guardsmen and reservists' base privileges in the interim – is meant to contain the spread of the virus that causes COVID-19.

In a letter to Menoni, San Nicolas wrote: "This is a chance for our military to showcase that they are here alongside the community when times are tough ... I am confident a better plan that is more inclusive and less divisive will be developed in place of the current circumstances – the admiral and base leadership are good people."

San Nicolas on Thursday stated he hasn't received a response from the military on his letter.

The admiral said the military has been transparent to the island community.

Menoni stated the military's "openness and transparency, though, has a second-order effect of adding additional information to the facts, rumors and ﬁction we are bombarded with every day. The effect is to add to the stress we are all feeling and our own individualized fears that may be developing as we work through this crisis."

"This stress, which is not localized to any one person or group of people, threatens to fracture the Guam civilian-military team. We cannot let that happen - we are all in this together."

"In order to accomplish these tasks and best mitigate the risk of spreading the virus, we have had to control access to our bases – including critical facilities like the Commissary and Hospital – and limit some of our nonessential services – measures that are consistent with the guidelines issued by the governor in the Public Health Emergency declaration," Menoni wrote, adding: "It is important to note that this cannot and will not devolve into an 'us' versus 'them' distinction."

Cited for trying to buy gas

Earlier this week, an unidentified Guam National Guard member was given a citation for entering Andersen Air Force Base during the week and trying to buy gasoline from the base.

Staff Sgt. Divine Cox said previously the guardsman was seen at the base gas station filling up a few containers of gasoline. “Guardsmen who are not on Title 10 orders are not allowed on base until the weekend … per the recent restrictions because of coronavirus,” Cox said. Title 10 orders place guardsmen under federal active-duty status.