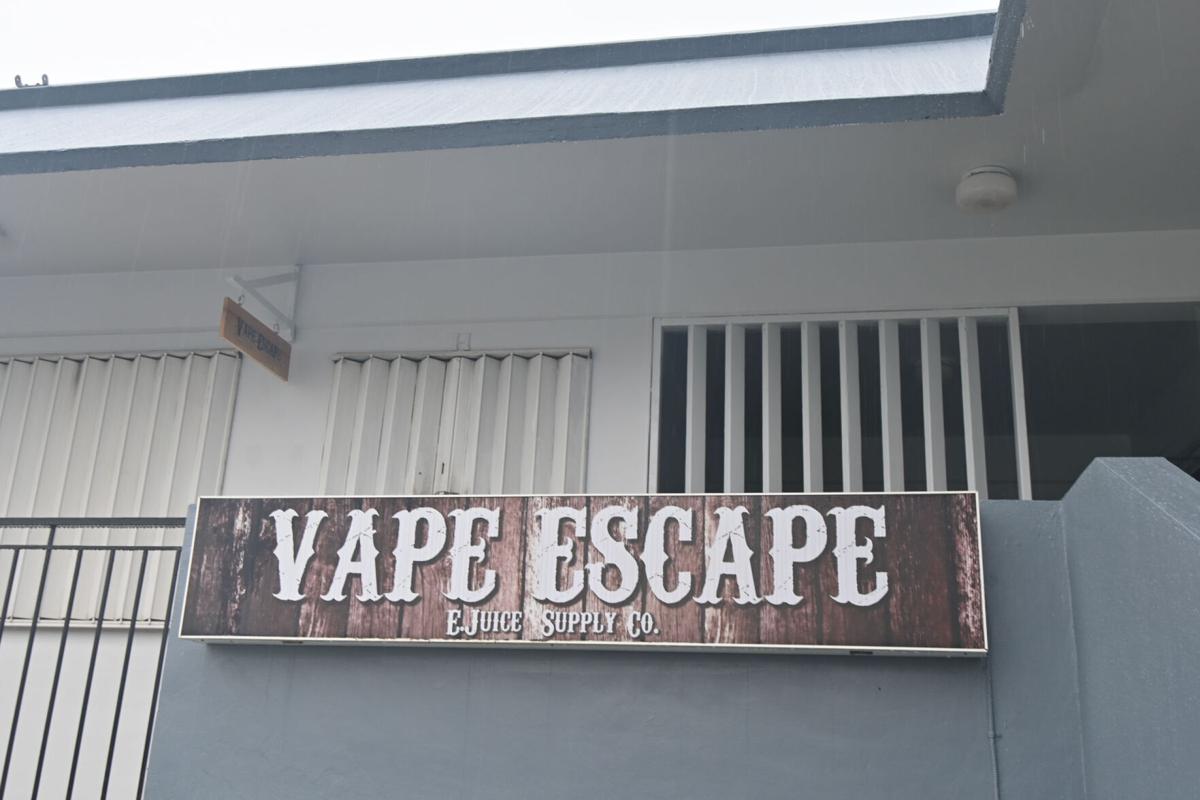 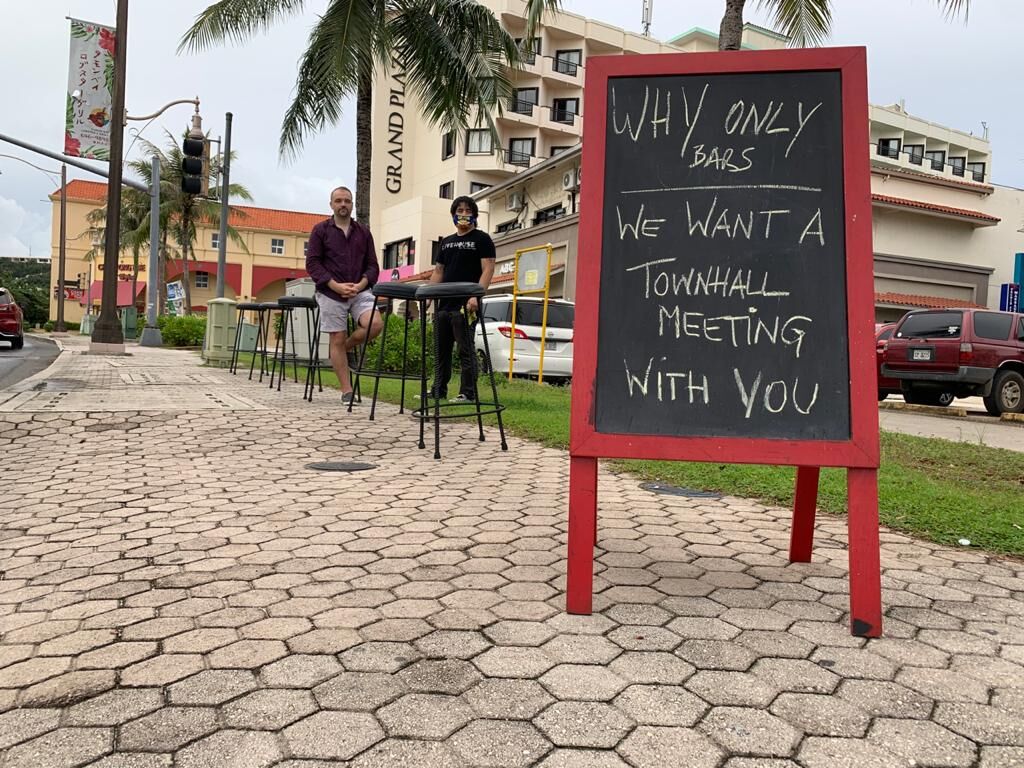 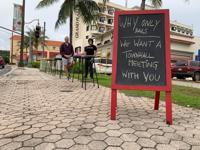 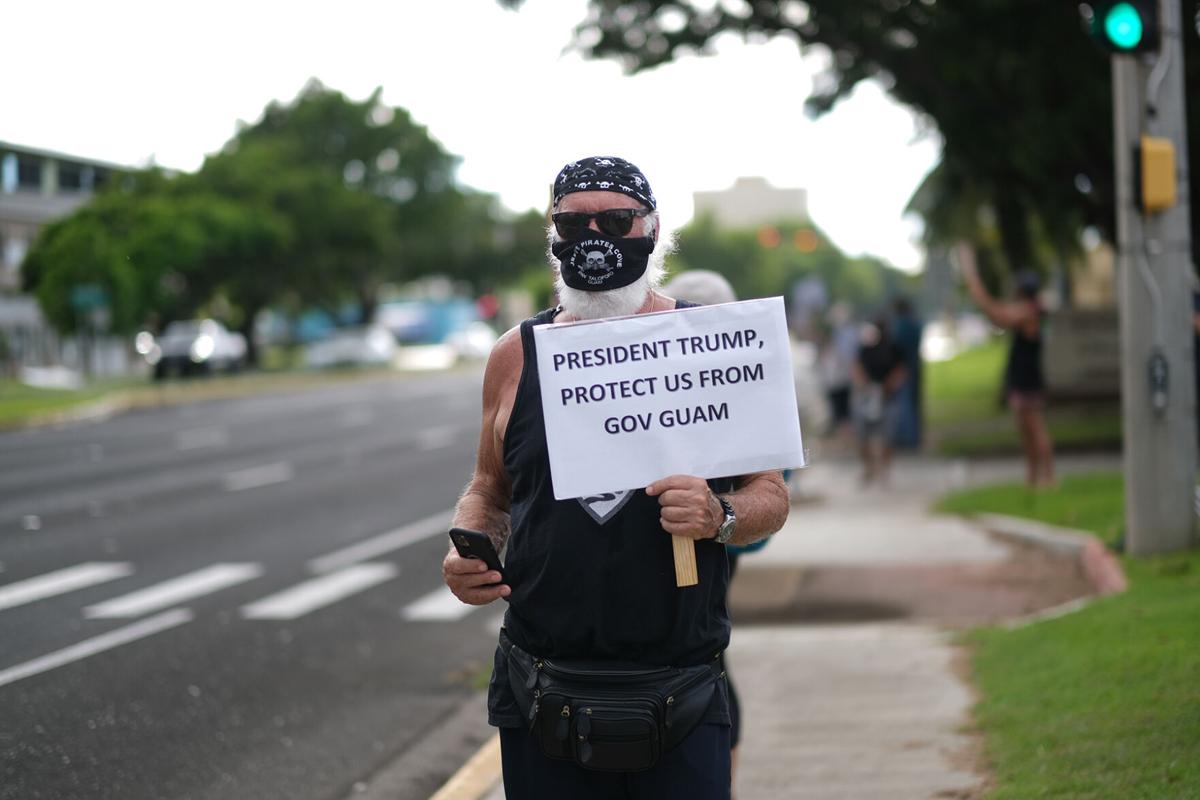 PROTEST: Jeff Pleadwell, the owner of Jeff's Pirates Cove in Ipan, was one of the business owners carrying a sign at the Hagåtña protest against the local government's restrictions on nonessential businesses earlier this month. Norman M. Taruc/The Guam Daily Post

Theseus Mendiola, 42, is worried about losing the small business that he and his wife worked hard to build over the last three years.

The governor's order to shut down a wide range of businesses she deems nonessential, to help control the spread of COVID-19, is now also reaching the point of killing Mendiola's Vape Escape.

"Allow us to survive, open us up," he said. "The lockdown is not stopping the virus. Allow us to work and reopen our business, with all the health and safety guidelines that we will follow to the teeth."

Miles away from Guam, a federal judge Monday ruled that the Pennsylvania governor's coronavirus orders, which closed nonessential businesses and limited gatherings, is "unconstitutional."

"I believe it," Mendiola said of the ruling.

While Mendiola is not one to take the government of Guam to court, he hopes that local leaders will learn from the Pennsylvania court ruling and lift the business restrictions.

Other small businesses on Guam, however, said they are following Pennsylvania businesses' lead in seeking court action to strike down Gov. Lou Leon Guerrero's COVID-19 restrictions that include the massive closure of businesses.

Jeff Pleadwell, owner of Jeff's Pirates Cove, who has been vocal about his concerns about the restrictive executive orders, Wednesday said he and other businesses will be filing a lawsuit similar to that filed by the Pennsylvania businesses.

He said they're meeting with an attorney about the plan.

A statement from Adelup, when sought for comment on the Pennsylvania court ruling and whether it has implications for Guam, said, "The governor has acted to save lives and prevent outright collapse of our health care system because of COVID-19."

"That's not only legal; it's her job. Courts have repeatedly recognized that emergency actions taken to combat a once-in-a-century global pandemic are necessary, and we believe the same would be true on Guam," the governor's press secretary Krystal Paco-San Agustin said Wednesday.

Pleadwell said things are getting worse for businesses as the lockdowns and other restrictions linger.

"My worst days ever are now. We have reduced to 16 employees, from 38 several weeks ago," Pleadwell said.

That 58% workforce reduction was a result of the GovGuam restrictions that permitted restaurants to open only curbside service. Before that, restaurants were limited to pickup or to-go orders.

When Pleadwell was allowed to reopen his dine-in restaurant, he was only permitted 50% occupancy despite the huge size and open-air concept of his restaurant.

The Pennsylvania governor’s efforts to slow the spread of the coronavirus "were undertaken with the good intention of addressing a public health emergency. But even in an emergency, the authority of government is not unfettered," the judge wrote.

He said, "The Constitution cannot accept the concept of a ‘new normal’ where the basic liberties of the people can be subordinated to open-ended emergency mitigation measures."

For months, Guam's small business owners have voiced their concerns about what they believe is the unconstitutionality of the governor's executive orders to control the virus such as shutting down businesses.

'I am not a Leon Guerrero'

In his desperation to bring attention to the plight of small businesses, Mendiola wrote an open letter to the governor and senators on social media.

"I feel like nobody listens to a little person or non-heavyweight and not a contributor to political campaigns like me," he said.

Any letter sent by mail, he said, would be ignored anyway.

"I worked hard for what I built. I am not a Calvo, Camacho, Gutierrez, Leon Guerrero or any notable family," Mendiola wrote. "I may lose everything because the government you control says I am not essential. I am essential to my customers. Stop these useless shutdowns and let us be responsible small businesses."

Unlike grocery stores, hardware stores and banks with hundreds of people in them most times, Mendiola's small business that sells vape juice and gear gets visited by only up to 10 people in an hour, he said.

"They don't come in all at once," Mendiola said. "I sanitize; I check temperatures; I follow social distance guidelines at my stores but yet I am deemed more unsafe than the places allowed to open with hundreds of customers an hour."

The coalition's members filed government claims "to ask to receive reimbursement for fixed cost and expenses based on a daily rate" for being forced to shut down under the governor's orders.

"We have been following measures taken by the leadership since the first day of the pandemic on March 20th, 2020. However, after 180-plus days, we can no longer accept that politicians of both sides of this leadership are turning a blind eye to our burden of heavy commercial rents and other monthly fixed costs that keep accumulating," the business group said.

If the lockdown lingers even longer, Mendiola hopes that GovGuam will put a freeze on rent for commercial properties that were not allowed to operate and provide landlords relief, lower the business privilege tax, and not charge for business license fee renewals, among other things.

Mendiola, of Vape Escape, said when his wife applied for the GEDA grant, she was told their small business does not meet the requirements of the program.

Mendiola said he's not asking for a handout in the time of a pandemic, but a fighting chance to keep his business that's been a source of pride, joy and food for his family and his employees.

Some 35,000 workers have already been laid off, furloughed or had their work hours cut directly as a result of the COVID-19 pandemic, and more will be added. Pacific Islands Club recently announced it is laying off 119 employees by mid-November.

While the pandemic temporarily shut down businesses, some have already closed for good. They include: