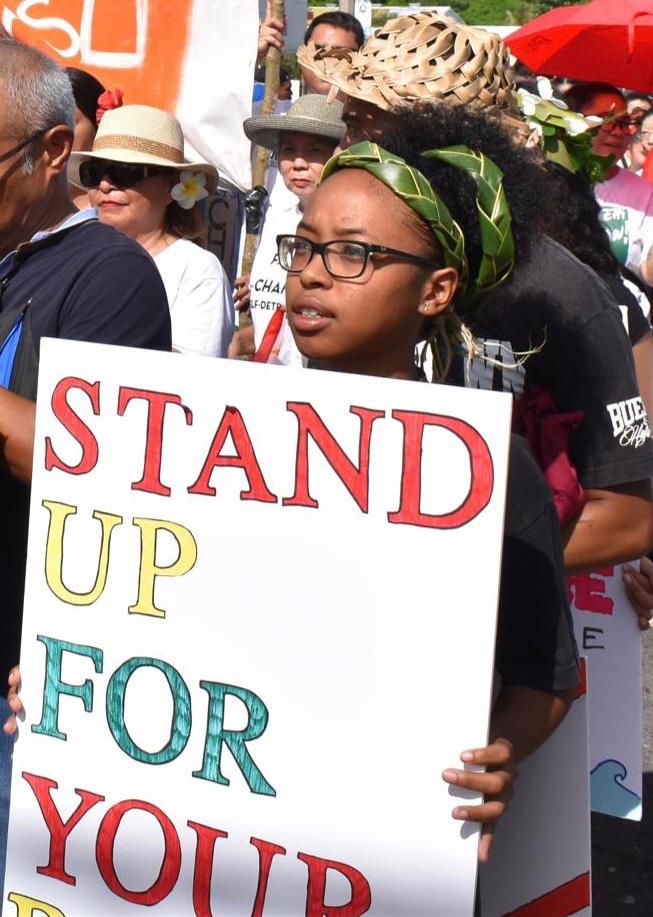 AN ADVOCATE FOR CHANGE: Talaani Gilbert is shown in a 2019 photo at an Independent Guåhan protest. The 2018 George Washington graduate, who will be attending the University of Guam in the fall, is coordinating a Black Lives Matter protest with Talysa Kakas to lend Guam's voice to the growing global cry against racial injustice. Photo courtesy of Talaani Gilbert 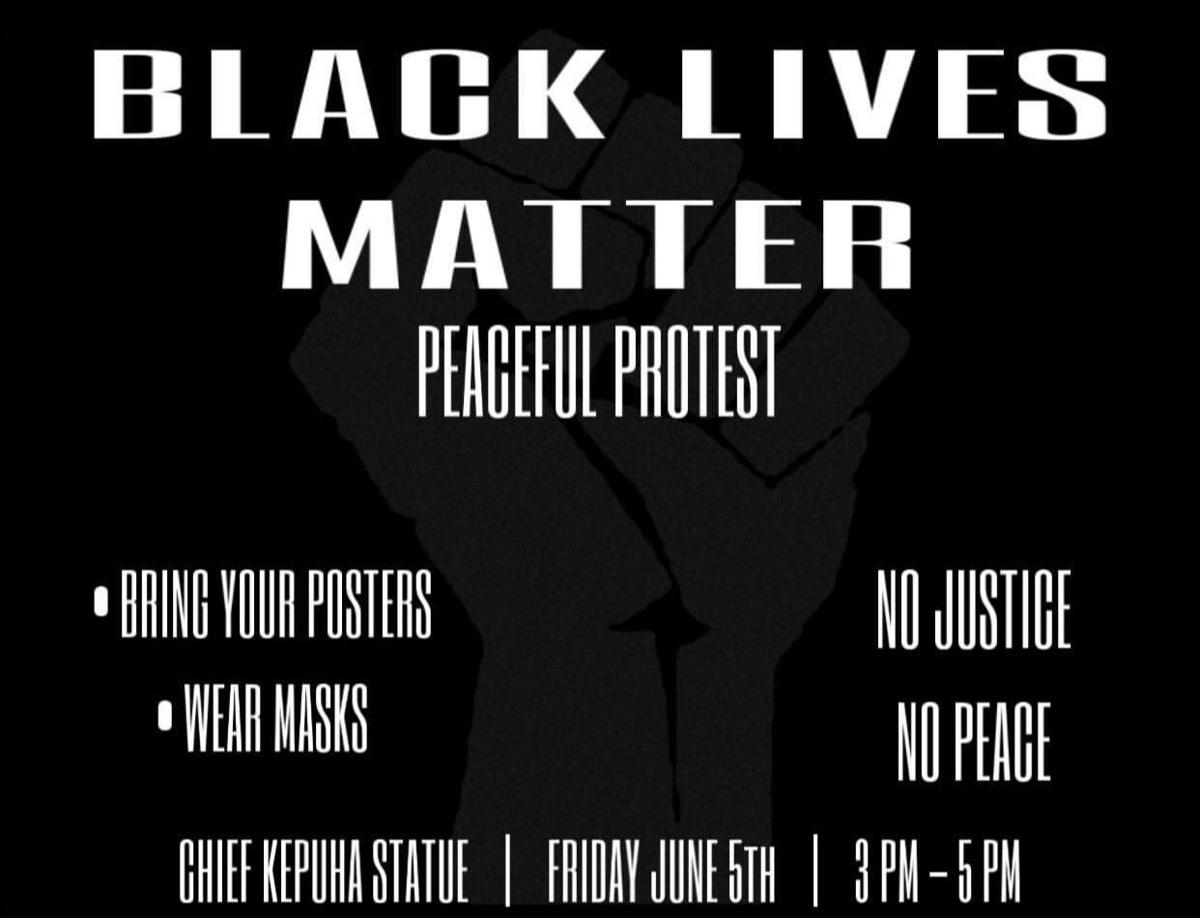 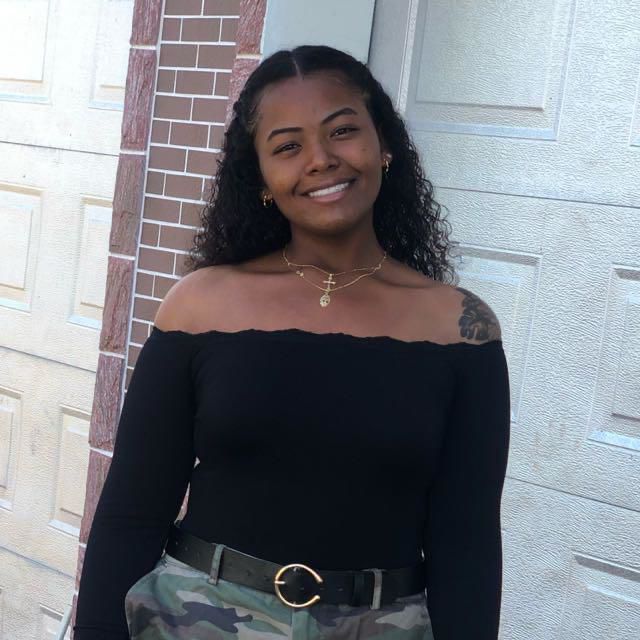 SPEAKING OUT: Talysa Kakas, a 2018 John F. Kennedy High School graduate and Social Work major at the University of Guam, is coordinating a Black Lives Matter protest with Talaani Gilbert. The peaceful protest, set for Friday from 3-5 p.m., will be held at the Chief Quipuha statue in Hagåtña. Photo courtesy of Talysa Kakas

AN ADVOCATE FOR CHANGE: Talaani Gilbert is shown in a 2019 photo at an Independent Guåhan protest. The 2018 George Washington graduate, who will be attending the University of Guam in the fall, is coordinating a Black Lives Matter protest with Talysa Kakas to lend Guam's voice to the growing global cry against racial injustice. Photo courtesy of Talaani Gilbert

SPEAKING OUT: Talysa Kakas, a 2018 John F. Kennedy High School graduate and Social Work major at the University of Guam, is coordinating a Black Lives Matter protest with Talaani Gilbert. The peaceful protest, set for Friday from 3-5 p.m., will be held at the Chief Quipuha statue in Hagåtña. Photo courtesy of Talysa Kakas

For two young women, speaking out against racism and lending Guam’s voice toward the global chorus to end racial injustice are worthy goals.

Both half-black and half-CHamoru, Talaani Gilbert and Talysa Kakas connected on social media, angry at the injustice after the recent death of George Floyd when a police officer from Minnesota kneeled on his neck for eight minutes. His death has sparked protests, most peaceful and some violent, across the U.S., rallying people from all corners of the nation.

To raise awareness and help Guam’s voice join the national discussion, the duo plan to hold a peaceful protest Friday in Hagåtña. Both outspoken and proud of their CHamoru heritage, they say it’s time to embrace their Black heritage as well, and get the island involved in what many consider an uncomfortable topic.

“We want to support those who are protesting all over the world,” said Kakas, a 2018 graduate from John F. Kennedy High School. “We all have to stand by each other.”

“The overall goal of this protest to show support … to show those back there that we see and know what they’re going through,” Gilbert said.

“I’ve honestly been speaking about since I was in high school, I used to write papers and do presentations about Black Lives Matter to try and give people the knowledge that I have about it,” said Gilbert, who graduated from George Washington High School in 2018 and will be majoring in business at the University of Guam. “I think now it’s important because honestly, it’s getting out of hand. It’s been happening too much and some people just choose to stay silent about it or turn a blind eye to what’s going on because it’s not happening here on island.”

“There’s racism towards Chuukese, Palauans, Filipinos,” said the 20-year-old, who was currently accepted into the Social Work program at UOG. “It’s important to voice your opinions. … To turn a blind eye means you’re giving permission and allowing it to happen.”

Both said they want to raise awareness. The protest serves to let people across the world know that Guam stands with them, they said, and to let people of the island know it’s not okay to make racist comments or stand idle when they see injustice.

The response to the protest has been pretty positive, they said, with family members and friends agreeing to help out.

However, Gilbert said, some of her family have expressed concerns, but she said it’s a discussion that has to happen.

Kakas said the response has been mostly positive but Facebook comments to her post have “definitely irked” her, she said. Some making comments about looting and rioting in the streets have gotten under her skin, she said, emphasizing that this will be a peaceful protest.

However, friends and family have jumped in to defend her on the FB post, supporting the cause.

"The support has been really nice – friends and family," she said. "I’m glad that they’re stepping up with me and fighting with me."

Growing up on Guam

“A lot of people try to adopt the Black culture, but they’re unwilling to adopt the repercussions or support people who live differently,” said Kakas, who has faced comments about her darker complexion or having curly hair. “Sometimes, people are rude and think I don’t belong here.”

Her first rude awakening came during her first trip as a child to the states when people didn’t want to be her friend because she was black. It has been a growing process for her, she said, one that was helped by having a supportive family, especially her mom. Her CHamoru grandfather, John Kakas, sat her down one day and gave her tips to protect herself if she’s pulled over or facing a situation she’s unfamiliar with.

The two don’t claim to be the experts in racism, but they hope to start a discussion that leads to understanding, especially on the island they love.

One example is people who use the N-word, which is prevalent in songs and movies.

Using the excuse that “my friend is black so I can see these words” is unacceptable, Gilbert said.

Kakas agreed, adding “People don’t look at the history of words and how they can hurt.”

If you have nothing nice to say, listen to what we were all taught as children, she said, and don’t say anything at all.

The protest, scheduled for Friday afternoon from 3-5 at the Chief Quipuha loop in Hagatña, will observe strict social distancing guidelines.

“This is a peaceful protest,” Kakas said. “Bring your signs and bring a mask.”