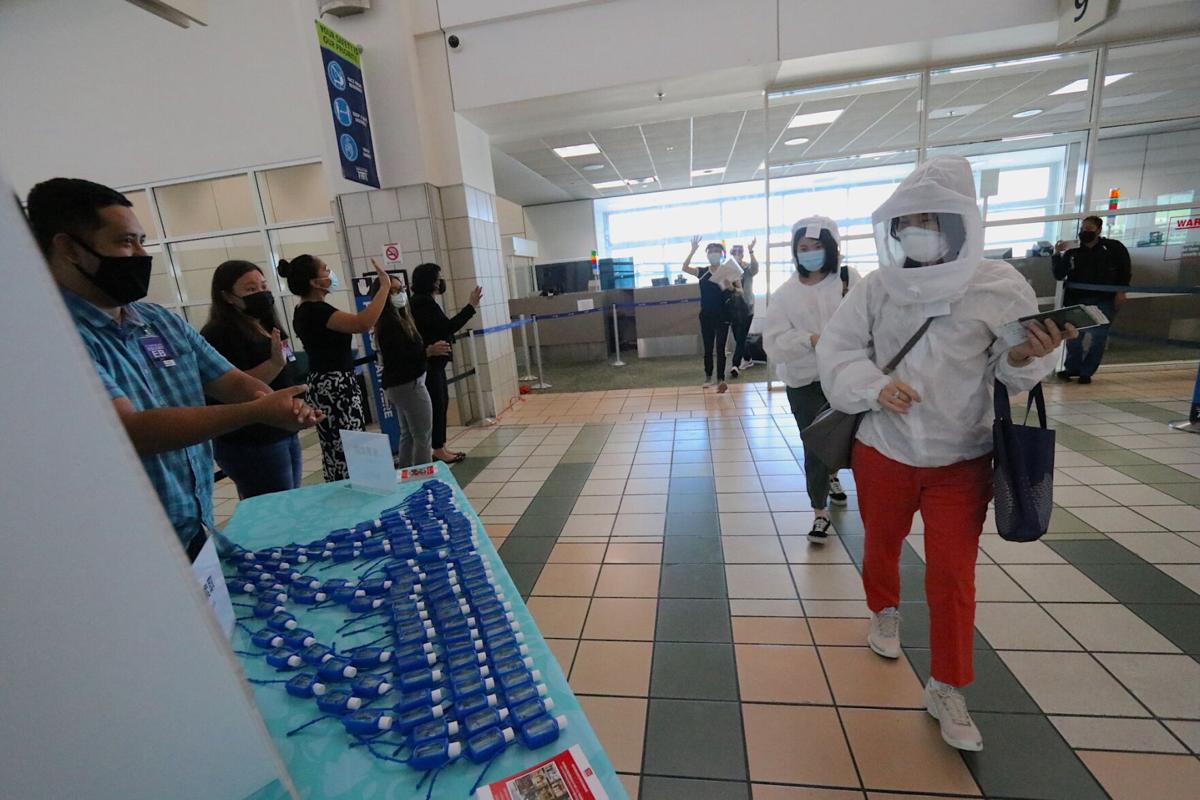 GREETINGS: Passengers wearing protective clothing arrive from Taiwan as part of Guam's vacation and vaccination program. They are greeted and offered free travel-size bottles of hand sanitizer by Guam Visitors Bureau staff as they make their way through the gate upon arrival at the A.B. Won Pat International Airport on July 28. Dontana Keraskes/The Guam Daily Post 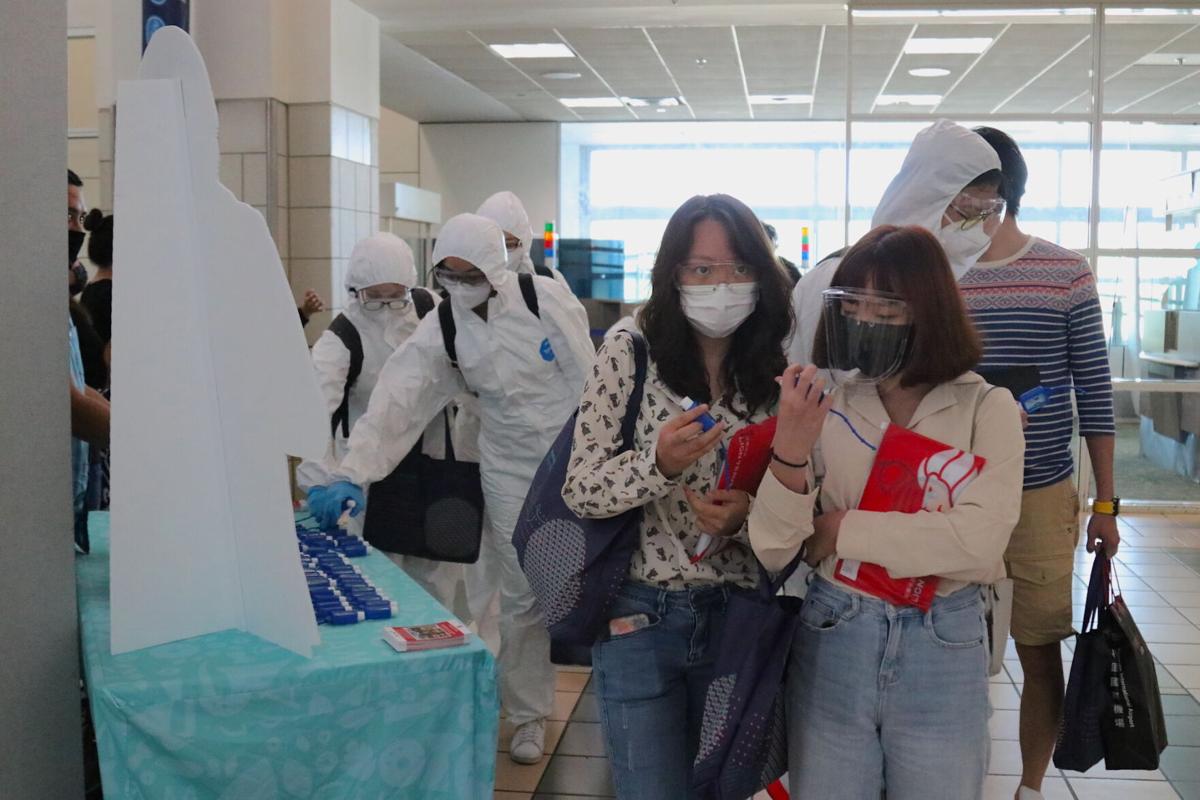 GREETINGS: Passengers wearing protective clothing arrive from Taiwan as part of Guam's vacation and vaccination program. They are greeted and offered free travel-size bottles of hand sanitizer by Guam Visitors Bureau staff as they make their way through the gate upon arrival at the A.B. Won Pat International Airport on July 28. Dontana Keraskes/The Guam Daily Post

Tourists have been trickling back to Guam but there are barely enough stores and restaurants in Tumon to visit, so Guam Visitors Bureau Board Chairman Milton Morinaga and other officials on Tuesday called for more tourism-related businesses to reopen.

More regular flights from Guam's main tourism market of South Korea will resume starting on July 31 and Aug. 6, after the tourism industry took a brutal hit from the COVID-19 pandemic.

These are on top of the more than 1,000 Taiwanese tourists that have arrived since July 6, including 177 that came in on Tuesday afternoon, and at least seven more charters in August, GVB said.

Most of the visitors from Taiwan are here for GVB's Air V&V or "vaccination and vacation" program but many have come and gone without many stores and restaurants to visit, Morinaga said.

"Tourists are coming back. Please have these stores start to open their doors. I know it's hard but we gotta just start to do business now to be ready," Morinaga said at Tuesday's GVB board meeting.

More Korean tourists are expected in August and September, and the Japanese are expected to start arriving in October and November, officials said.

Sam Shinohara, chairman of the Recovery Task Force, said Guam should prepare and learn lessons from destinations like Hawaii wherein "they're not ready for the volume of numbers they're having."

GVB President Carl Gutierrez said while businesses are "not quite opening up as what we would like," it's up to GVB to share information about flights coming in soon.

Gutierrez and other GVB officials said Guam has seen increased military personnel because of ongoing exercises and residents have been going out more, while the island is nearing its herd immunity goal of fully vaccinating 80% of the adult population.

Based on information provided at the GVB board meeting, here are other preliminary flight schedules and available passenger seats:

"We have all these flights coming in and if you can open your door to your stores or business, please do so. And if you have any store that are open and you like people to know, let GVB know and we will make sure information is transmitted to the necessary entities," Morinaga said.

The pandemic continues to hit the restaurant and tourism industries, with Red Lobster announcing its permanent closure on July 26 or only two years after opening. Many more businesses folded because of the pandemic.

Trolleys to be back soon

He said GVB and the Guam Economic Development Authority are working to "share the cost" of getting the trolleys running again, especially up and down the San Vitores Road in Tumon and surrounding areas like KMart.

GVB Board Director Derrick Quinata said he's glad the issue of getting the trolleys back was brought up because the car rental companies on Guam right now are already "maxed out" with the current business.

With the return of more tourists, Quinata said he doesn't think the car rentals can "sustain the level of business coming."

"Any uptick, you're gonna see a situation in places like Hawaii where they have to start charging through the roof for rental cars right now," he said.

Quinata added that a considerable supply of new cars may not happen until 2022 but the auto industry is hoping that would happen before 2021 ends. But this is for the service and retail market.

"The rental car business, when these people start coming in, it's gonna be really bad. So the trolleys, the buses, need to come in. GVB needs to keep that in mind," he said.

GVB has patented "Air V&V," GVB Vice President Gerry Perez announced, which he said gave Guam "green shoots of opportunity to really get us back on track and stimulate an industry that has been pretty much locked down for a year and a half."

Most of the visiting Taiwanese opted to get the two-dose Pfizer and Moderna vaccines, instead of the single-dose Johnson & Johnson vaccine.

Arrivals from July 1 to 16, for example, were up by 385.7% to 3,424, compared to the same period last year, Perez said, and that's driven mainly by the Air V&V arrivals from Taiwan and the ongoing military exercises.

Guam was receiving more than 1 million visitors a year prior to the pandemic but its fiscal 2022 forecast is a conservative 70,000 or an optimistic one at 130,000.

GVB is considering a delegation of Guam dignitaries visiting Taiwan to personally request that the protocols for travelers returning from Guam be different from those returning from the U.S. mainland.

Gutierrez said if this trip materializes, the delegation could include him, Morinaga, the chairman of the Physicians Advisory Group Dr. Hoe Nguyen, Guam State Surgeon Dr. Mike Cruz, and the governor's chief of staff.

The plan is to "convince" the Taiwanese government "that Guam should not be lumped in with the entire United States," Gutierrez said.

"Our protocol should be different so that when that happens, then maybe three flights a week with some of these airlines will start to materialize," he said.

It will not only provide a rain shelter for students and residents but also for tourists who walk from the Tumon hotels to Kmart. GVB is working on the cost estimates for the project, and is also considering seeking donations.