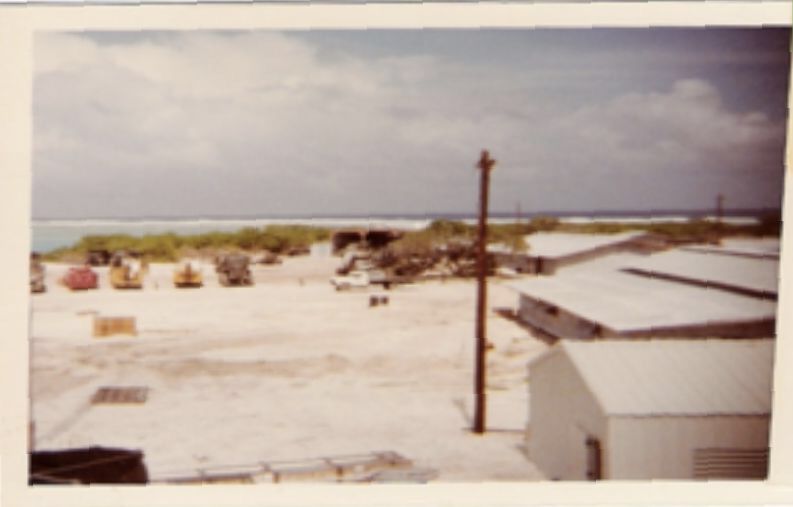 LOJWA ISLAND: A soldier's view of Lojwa Island on Enewetak Atoll, in the Marshall Islands. Military housing can be seen to the right. Robert Celestial was sent to Lojwa Island by the U.S. Army to clean up nuclear waste from years of testing. Today, Celestial advocates for those who participated in the cleanup to receive federal compensation for radiation-related illnesses. Photo courtesy of Robert Celestial 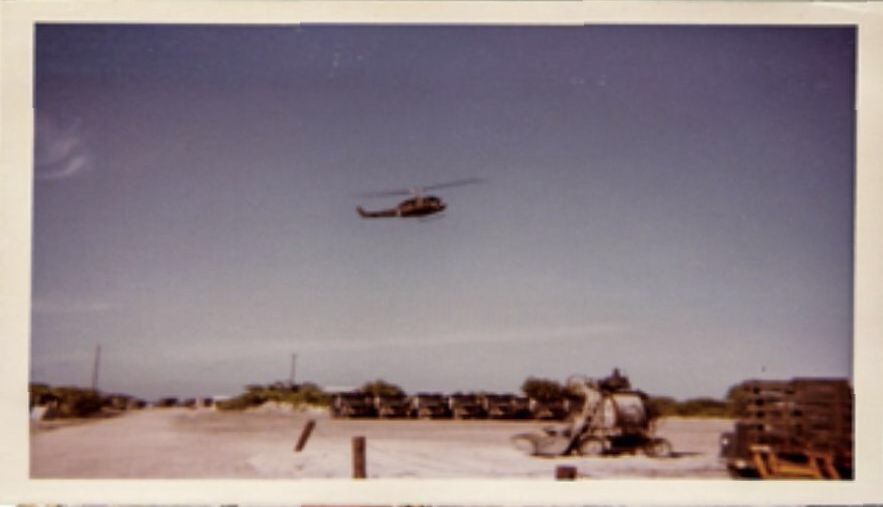 ENEWETAK ATOLL: A military helicopter hovers over Enewetak Atoll in the Marshall Islands for a medical transport, in this photo provided by Robert Celestial. He was sent to Lojwa Island by the U.S. Army to clean up nuclear waste after years of testing. Photo courtesy of Robert Celestial 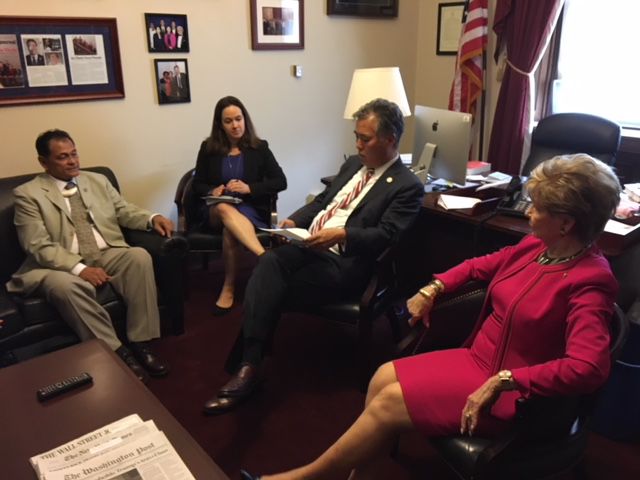 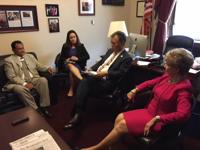 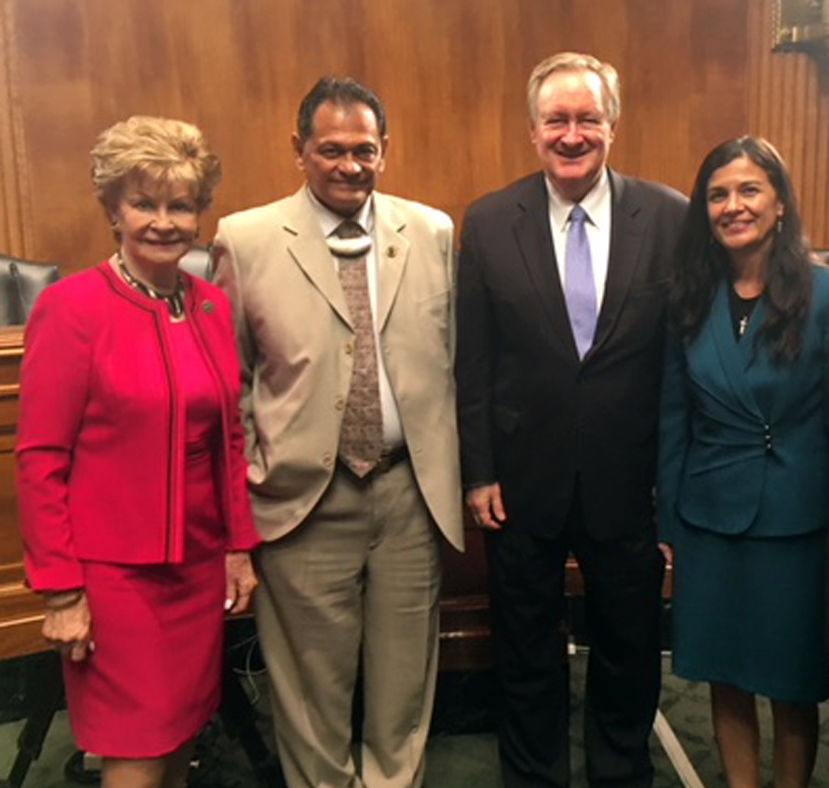 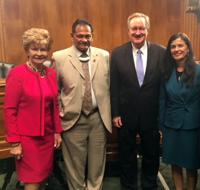 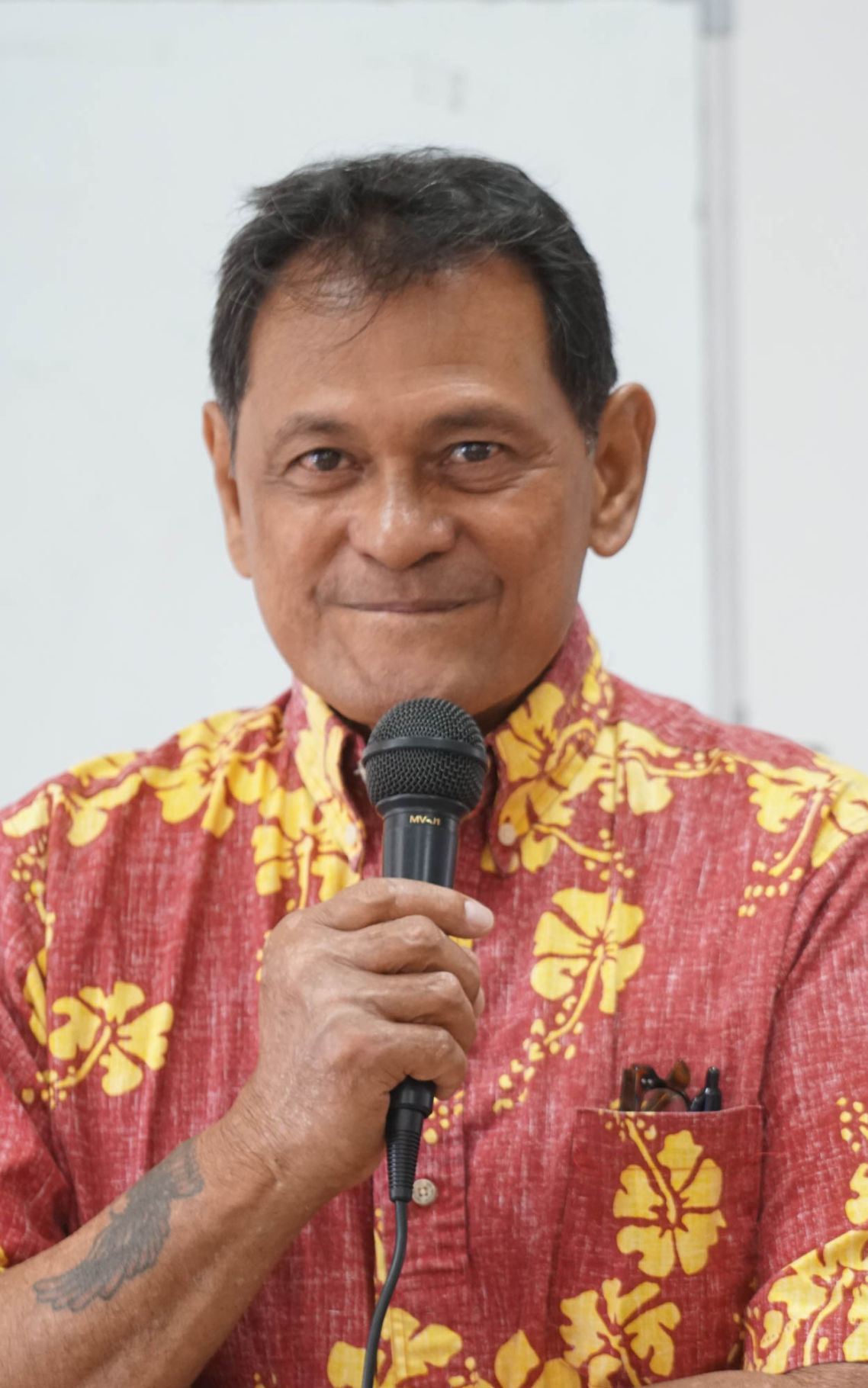 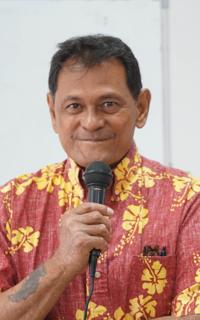 LOJWA ISLAND: A soldier's view of Lojwa Island on Enewetak Atoll, in the Marshall Islands. Military housing can be seen to the right. Robert Celestial was sent to Lojwa Island by the U.S. Army to clean up nuclear waste from years of testing. Today, Celestial advocates for those who participated in the cleanup to receive federal compensation for radiation-related illnesses. Photo courtesy of Robert Celestial

ENEWETAK ATOLL: A military helicopter hovers over Enewetak Atoll in the Marshall Islands for a medical transport, in this photo provided by Robert Celestial. He was sent to Lojwa Island by the U.S. Army to clean up nuclear waste after years of testing. Photo courtesy of Robert Celestial

As one of a few islanders in his company within the U.S. Army, Robert Celestial jumped at the chance to help with post-World War II cleanup in the Republic of the Marshall Islands in the late 1970s. He looked forward to six months of island living and was promised a monthly trip to Hawaii for some R&R.

Not long after, Celestial found himself draining water from a crater on Lojwa Island in the Enewetak Atoll, wearing shorts, boots and a dust mask. The crater was left over from a nuclear test explosion. While he knew they were dealing with nuclear waste during the deployment, he said he did not know that was what the crater was from.

“We were never told the extent of the 66 nuclear detonations,” he said. “The only thing that was serious was the Air Force was in charge of the Geiger counters ... if you see an Air Force guy running, then you better run.”

Like any good soldier, he followed orders and didn’t ask questions. When a magazine came to report on the cleanup, some soldiers donned a full-body protective suit. Celestial said it was the only time he saw the suit used.

Celestial said he and fellow soldiers often caught fish, lobster and octopus to eat. They were not told that the seafood could be contaminated until months after arriving.

More than 70 years after the United States dropped atomic bombs on Hiroshima and Nagasaki, Celestial’s past willingness to be exposed to that level of nuclear radiation is unthinkable.

But that was decades ago, at the dawn of the nuclear age. Few could be expected to predict the ramifications of their six-month cleanup tour.

Today, Celestial, who serves as president of the Guam-based Pacific Association for Radiation Survivors, says he is blessed: He hasn’t been diagnosed with cancer, unlike many of his fellow veterans, and was discharged from the Army with full disability.

Celestial said he deals with rheumatoid arthritis and osteoporosis. In fact, he said, almost all atomic veterans suffer from brittle bones. Two decades ago, while living in San Diego, California, Celestial was told he had the liver of a 90-year-old and was given four years to live, but he ultimately recovered.

Others have not been as fortunate. One Enewetak veteran, who lives in Maine, has been diagnosed with six distinct cancers, Celestial said. Because he was diagnosed after his separation from the military, he does not receive any compensation for medical costs.

Without any major medical issues, some wonder why Celestial has spent the better part of the past two decades fighting for Guam and veterans who participated in the Enewetak Atoll cleanup to receive federal reimbursement for illnesses linked to radiation exposure.

Legislation has been introduced that would expand the Radiation Exposure Compensation Act. The current law has distributed more than $2 billion to residents within Nevada, Utah and Arizona who suffer from radiation-related illnesses, but will end payments by 2022. The last year for people to apply for coverage is 2020.

The proposed amendment would extend RECA by 19 years and offer up to $150,000 in medical coverage to residents of Guam, Idaho, New Mexico and the Navajo Nation.

In late June, Celestial gave testimony before the U.S. Senate Committee on the Judiciary. Toward the end of the hearing, he was asked if he had cancer.

He said his Senate testimony – given alongside downwinder allies from Idaho, New Mexico and Navajo Nation – was a new high in his decades-long fight.

“Now the Senate really believes our testimonies,” Celestial said. “They really understand this.”

But he refuses to make any promises about the future.

“What we’ve done in the Senate is the closest we’ve come,” he said. “Now we have to go to the House.”

Days after returning from his mainland tour, Celestial already is back to work.

He hopes to get back to the nation's capital before the 115th Congress adjourns in December. If the RECA amendment is not passed and signed into law before then, much of Celestial’s progress will be lost.

Celestial admitted that he was once naive about how to navigate political dealings. Today, he understands there’s only so much he can do as the president of a nonprofit. The rest is up to the island’s and the nation’s elected leaders.

He said he is grateful for the support he’s received from Vice Speaker Therese Terlaje, who attended the Senate hearing and submitted written testimony.

“I give her a lot of credit for being there, for being strong, for really believing in what we’re trying to do,” he said of Terlaje, who he said attends all of the PARS meetings.

Years ago, Celestial’s fight was bolstered by a report from the Board on Radiation Effects Research, which determined that Guam “did receive measurable fallout.”

Without this proof, Celestial said, he would not have continued his work on RECA.

Lt. Charles Bert Schreiber, a chemical, biological and radiological officer with the U.S. Navy who served on Guam in 1952, gave testimony to the BRER, saying that just two days after a nuclear explosion in the Marshall Islands, radiation level readings were off the charts on Guam.

According to Schreiber’s testimony in 2001, he went straight to the admiral’s top aide to see what needed to be done. Minutes later, he was told to leave.

“I then knew something was very, very wrong,” Schreiber said in his testimony.

After giving this testimony, containing information that Celestial said was previously classified above the top-secret level, Schreiber revealed to Celestial that a burden had been lifted from him, as he was finally able to share what happened.

“The Guamanians, for the large part, had only rainwater for drinking ... and they were drinking highly contaminated radioactive water and I could not tell them to stop. The Navy ... did not provide any information to the military personnel, civilians or the natives about how to protect themselves.”

According to Post files, Schreiber called it quite simply “madness.”