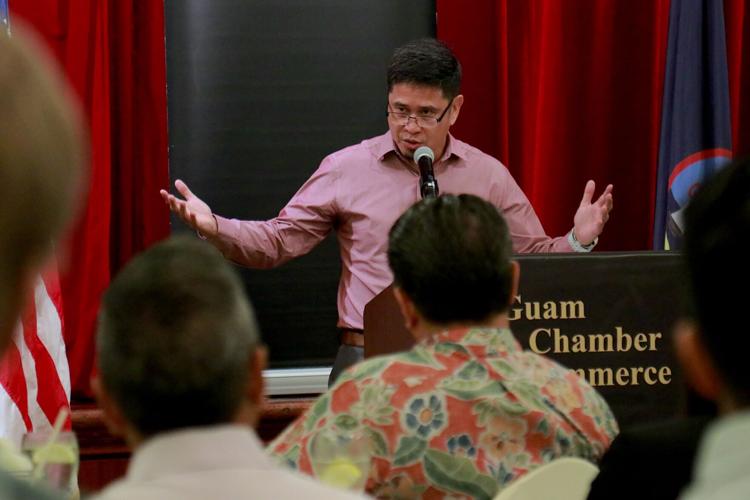 GUMATAOTAO: Shawn Gumataotao, managing partner of GET LLC and adjunct instructor in the Division of Communications and Fine Arts at the University of Guam, speaks Wednesday during a meeting of the Guam Chamber of Commerce at the Hilton Guam Resort and Spa about how federal funds are used in the government of Guam.  Dontana Keraskes/The Guam Daily Post 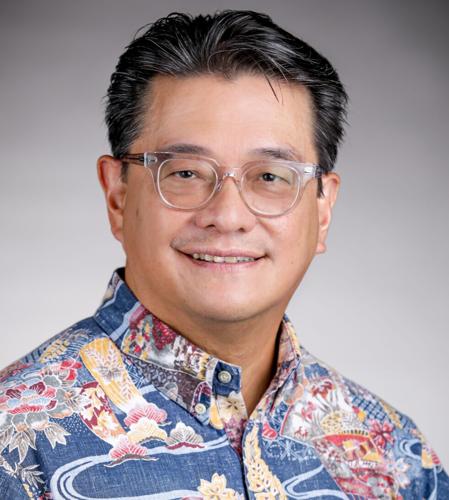 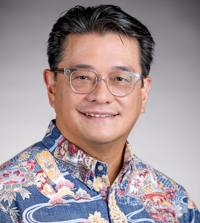 The tax cut will cost the local government about $60 million and GovGuam can afford to take the hit because, according to Untalan, it hasn't spent $348.55 million in American Rescue Plan Act funding to help keep businesses and jobs afloat.

The largest business organization on Guam has been seeking a BPT rollback from 5% to 4%.

Adelup recently reported that its actual general fund revenue collection for the first half of fiscal 2022 exceeded its target by $68 million, and GovGuam could end up with that amount of excess revenue at the end of the budget year.

"We are $68 million ahead of the game. Set aside $68 million and roll it back one year," Untalan said at the Chamber's general membership meeting at Hilton Guam Resort and Spa. "We have $345 million (in unspent ARPA money), roll it back two years, set it aside. Use the money wisely to help the community."

Gov. Lou Leon Guerrero has maintained that the BPT will remain at 5%, which was supposed to be temporary during the prior Republican administration to make up for GovGuam's revenue dip as a result of then-President Donald Trump's tax cuts.

Leon Guerrero later said she's open to discussing a rollback if there's going to be a replacement for the revenue lost as a result of a rollback.

"It's difficult when you have leaders in there who are already set and they don't even want to hear," Untalan said.

At the same time, he is calling on businesses to join the political action group called Action PAC Inc., which has launched a petition to roll back the BPT to help ease the burden on businesses and the people they employ.

Shawn Gumataotao, managing partner of GET LLC and former deputy chief of staff and director of policy during the administration of then Gov. Felix P. Camacho, said not much has changed over the years in the process of spending federal funds appropriated by Congress and approved by the White House.

He talked about the American Recovery and Reinvestment Act, or ARRA, funding in 2009 and the COVID-19 pandemic response and recovery funds of today. Guam has seen more than $3 billion in federal funds since the start of the pandemic, including that for military buildup construction and the $800 million-plus for Pandemic Unemployment Assistance.

This is on top of the $578.71 million in ARPA funding that the governor has full control over.

All these federal funds, Gumataotao said, speak to how much authority the office of the governor has in driving the spending of funds approved by Congress and the White House.

"The point is, plenty of money is being spent, ever, by the office of the governor of Guam. Now these numbers and the process that we've all been witness to over the last two years should be a cautionary tale for all of us. We have seen in recent weeks cash set aside to give raises, to hire new employees, and to give money to taxpayers. Now the latter makes some sense, right, but the other two – raises and hiring?" Gumataotao asked.

"This little exchange only scratches the surface of this important discussion," Gumataotao said, adding that Chamber members can bring these discussions up with lawmakers.

Untalan said an election year, such as this year, is when policymakers listen more to their constituents, including those in the business community.

At the end of every year, I like to take a moment and think about what these previous months taught me about students, education, the professi… Read more