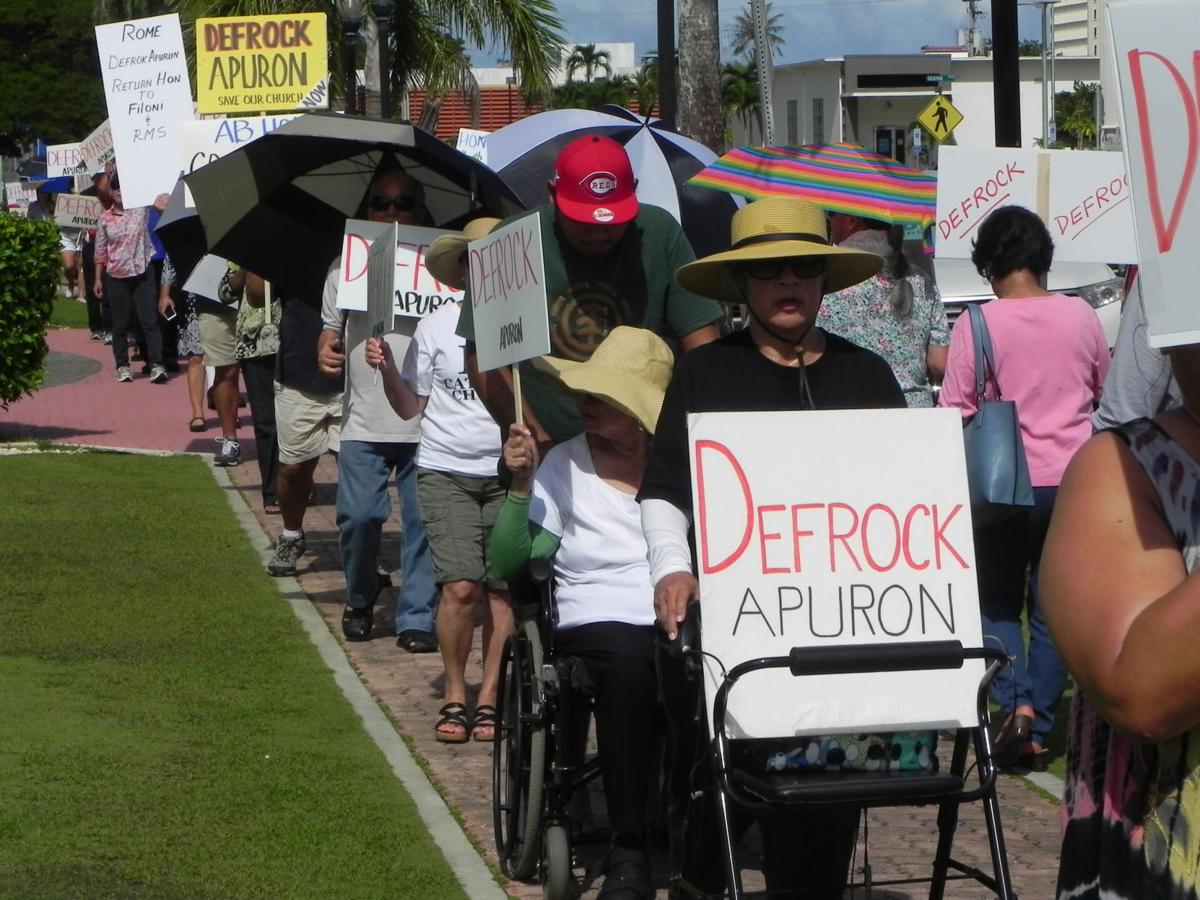 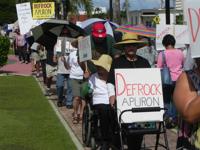 GRIEVANCES: About 150 Catholic lay activists join the weekly protest in front of the Dulce Nombre de Maria Cathedral-Basilica in Hagåtña yesterday, Sept. 25. They are calling for the removal and defrocking of Archbishop Anthony Apuron for grievances that include the sexual abuse of altar boys in the 1970s. Neil Pang/Post 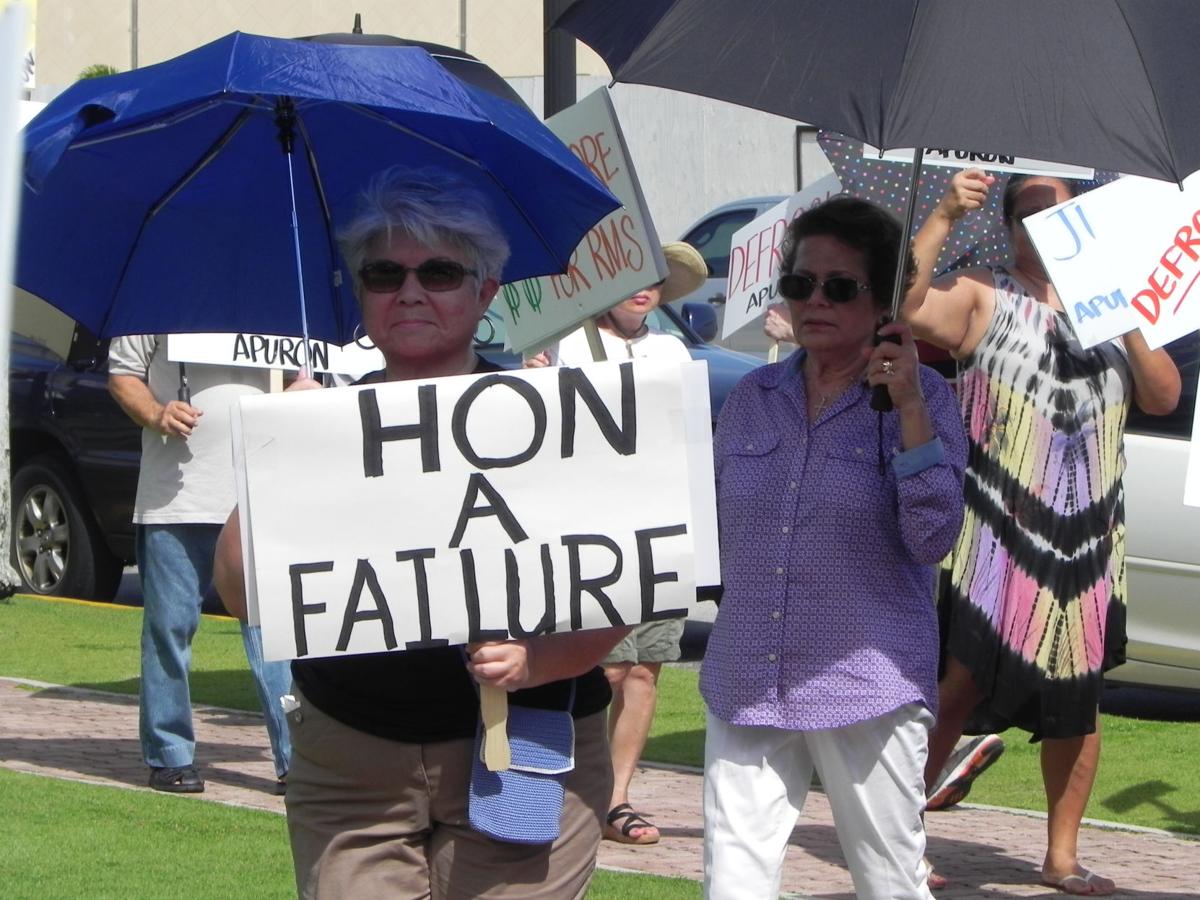 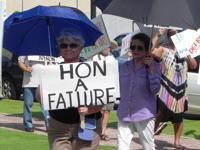 ACTIVISTS: About 150 Catholic lay activists join the weekly protest in front of the Dulce Nombre de Maria Cathedral-Basilica in Hagåtña yesterday, Sept. 25. They are calling for the removal and defrocking of Archbishop Anthony Apuron for grievances that include the sexual abuse of altar boys in the 1970s. Neil Pang/Post 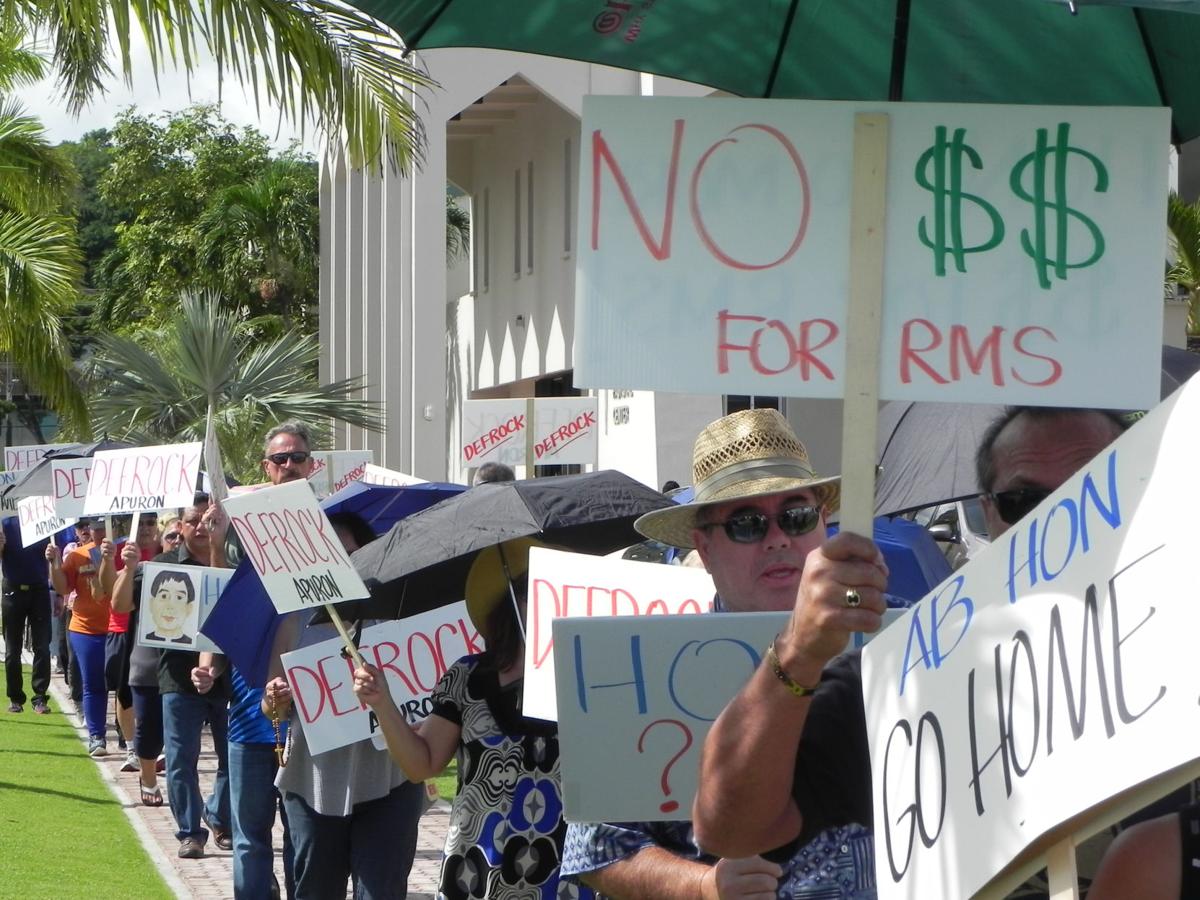 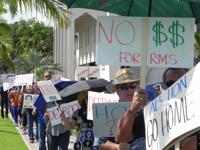 PROTEST: Catholic activists join the weekly protest in front of the Dulce Nombre de Maria Cathedral-Basilica in Hagåtña yesterday, Sept. 25. They are calling for the removal and defrocking of Archbishop Anthony Apuron. Neil Pang/Post

GRIEVANCES: About 150 Catholic lay activists join the weekly protest in front of the Dulce Nombre de Maria Cathedral-Basilica in Hagåtña yesterday, Sept. 25. They are calling for the removal and defrocking of Archbishop Anthony Apuron for grievances that include the sexual abuse of altar boys in the 1970s. Neil Pang/Post

ACTIVISTS: About 150 Catholic lay activists join the weekly protest in front of the Dulce Nombre de Maria Cathedral-Basilica in Hagåtña yesterday, Sept. 25. They are calling for the removal and defrocking of Archbishop Anthony Apuron for grievances that include the sexual abuse of altar boys in the 1970s. Neil Pang/Post

PROTEST: Catholic activists join the weekly protest in front of the Dulce Nombre de Maria Cathedral-Basilica in Hagåtña yesterday, Sept. 25. They are calling for the removal and defrocking of Archbishop Anthony Apuron. Neil Pang/Post

About 150 Catholic activists – the most so far – turned out yesterday morning for the weekly protests held outside the Dulce Nombre de Maria Cathedral-Basilica in Hagåtña. Stretching to the driveways on both ends of the walkway in front of the cathedral, protestors were stalled at multiple segments of the picket line as they adjusted to the unprecedented turnout.

Taking part were members of Silent No More, Concerned Catholics of Guam and the Laity Forward Movement – the three lay organizations that have organized the major protests concerning the allegations of child sex abuse against members of the clergy, the property dispute over the Redemptoris Mater Seminary and the call for the laicization of Archbishop Anthony Apuron. In addition, yesterday’s picket line included parishioners from the Immaculate Heart of Mary Catholic Church in Toto.

Picket organizers said the Toto parishioners took part as a show of support for their pastor, Rev. Mike Crisostomo. Crisostomo had recently been reprimanded by Archbishop Savio Hon Tai Fai, the apostolic administrator to the Archdiocese of Agana.

"We stand in solidarity behind our parish priest," said John Taitano, member of the Toto parish council. "We are here to support him."

According to sources, Crisostomo attended a meeting of the Presbyteral Council of the Archdiocese where Hon is said to have singled him out and accused him of disobedience in the presence of other council members.

The Presbyteral Council comprises priests who serve in an advisory capacity to the chief authority of the diocese.

Hon accused Crisostomo of disobeying the instruction to read a letter at Mass on Sunday, Sept. 18, that advised parishioners to consider signing a petition asking Gov. Eddie Calvo to veto the bill that will lift the statute of limitations on civil cases involving child sex abuse.

The letter, which was disseminated to priests around the island, stated that the passage of the bill would result in a financial liability wrought by numerous lawsuits that would prove too heavy a burden on the church's coffers and result in bankruptcy of the archdiocese and the subsequent closure of educational institutions and charitable services.

Despite Crisostomo's refusal to read the letter at the Toto church, Archdiocesan officials submitted 4,700 signatures to the governor's office on Sept. 21 asking him to veto the bill.

"For Hon to single (Crisostomo) out simply because he did not read the letter at Sunday's Mass is pathetic and should not have happened," Taitano said.

Rev. Jeff San Nicolas, delegate to the apostolic administrator, was present and answered questions during the protest.

"Father Mike is my friend and he has my support," he told the Post. "I understand the reason why people are coming out here. I understand their pain and I want them to know that I'm here with them."

San Nicolas said his physical presence outside the cathedral during the protest was unusual and proof of his understanding and support for Crisostomo.

A new message from protest groups at yesterday's picket demanded that Hon be removed from his position as apostolic administrator for the Archdiocese of Agana and return to Rome.

Protestors made accusations of mismanagement and ineptitude by Hon and fueled by the proceedings of the Presbyteral Council meeting, more of the protestors have called for the removal of Hon.

At least 15 "AB Hon Go Home" signs and one "Hon a Failure" sign circulated the picket line during yesterday’s protests. Vice Speaker Benjamin Cruz, who participated in the protests, carried one such sign.

"I wanted to express the depths of my dismay and disappointment in this new archbishop," said Cruz.

Cruz told the Post he had been largely ostracized from church proceedings by Apuron and that he had had great hope in Hon's appointment as apostolic administrator. That hope was lost, he said, when Hon released the statement asking Calvo to veto Bill 326.

"When no one (from the church) came to testify against Bill 326, I felt hope – I thought maybe the church was not going to oppose this," he said. "But last Sunday when the letter went out, I felt betrayed."

Cruz said he had twice crossed the picket line to attend 9:30 Mass in order to personally let Hon know he was available for consultation with regard to the church's sex abuse response committee, but that he was never contacted.

"We need to have him understand that maybe it's time for him to go home," he said. "I thought he was going to clean up the mess, but all he's doing is protecting the predators and protecting the fortunes of the church rather than protecting the souls of the archdiocese."

Despite the news concerning Hon's treatment of Crisostomo, spirits ran high yesterday as picketers acknowledged the signing of Bill 326.

Joe Santos, founder of Silent No More, said he was elated and more than a little surprised when he heard the news on Friday.

"The governor did me a great honor and called me," he said. "The governor thanked me for inspiring his decision."

San Nicolas said he respected the governor's decision and asserted that he would do all he could to ensure cooperation within the church.

"The people have spoken," San Nicolas said. "The governor, legislature and laity can be assured that I will personally do everything that I can to make sure we are cooperative and that justice is served."

Though the passage of Bill 326 is a milestone for protestors, they acknowledged that the fight is not over.

"Our mission was to secure legislation for lifting the statute of limitations," Santos said. "But it's only one battle in a war. There are still 453 Level 1 sex offenders on Guam's sex offender registry – none of whom are priests."

Andrew Camacho, vice president of Concerned Catholics, said that while they're more than happy Bill 326 was enacted, the group will continue to advocate for the removal of Apuron from his position.

"We definitely believe that Anthony Apuron is no longer fit to be the archbishop of Guam," he said.

According to Camacho, the Presbyteral Council recommended to Hon that Apuron be removed and Hon has conveyed that message to the Vatican.

With the statute of limitations now lifted, victims of child sex abuse from any time in the past can initiate a civil suit against their abusers and the abuser’s aiders and abettors. The bill does not specifically target the church, but opens entities and institutions to be targeted as aiders or abettors if it can be shown that they knew about the abuse at the time and did nothing to stop them.

Multiple sources have indicated that other individuals beyond Roland Sondia, Roy Quintanilla, Walter Denton, Doris Concepcion, Leo Tudela and Ramon De Plata have made allegations of abuse against clergy members, but have not done so publicly.

Though it is not known how many may come forward, Sondia, who was one of four who first made accusations in public, has said in previous statements that he would pursue civil action under the provisions of the new law.