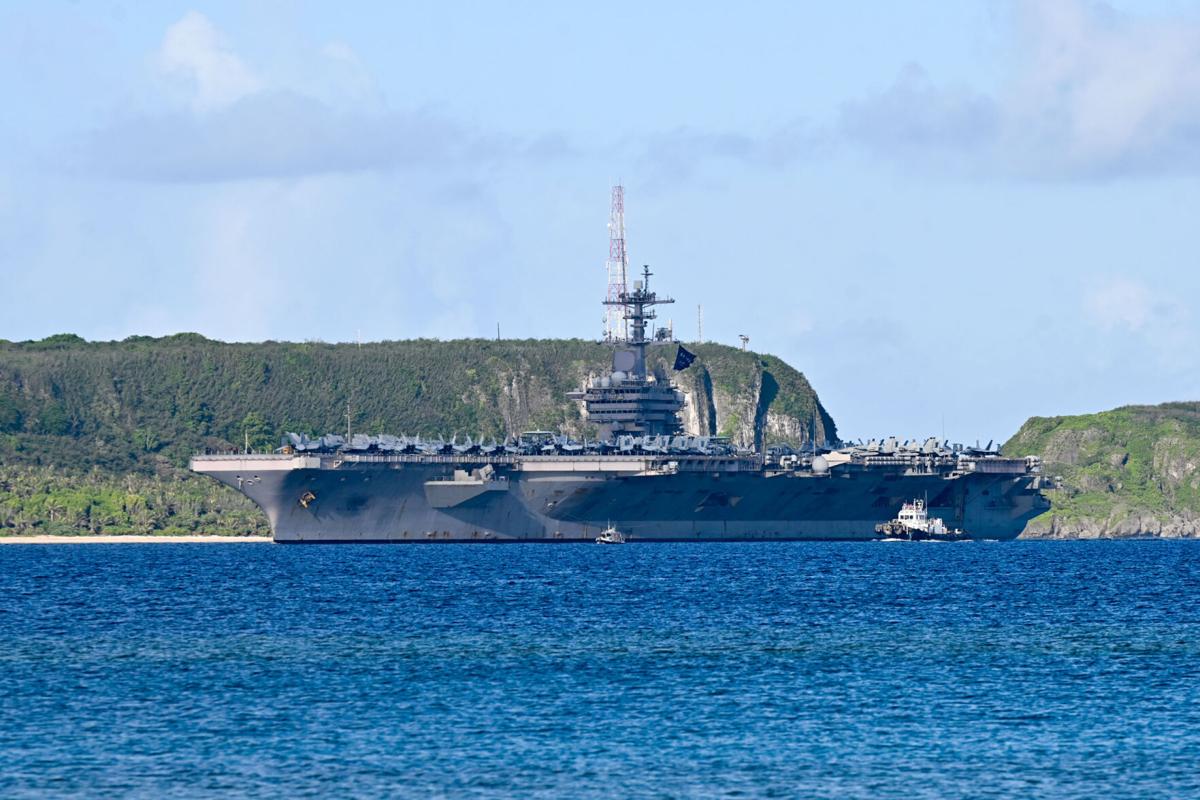 BACK IN GUAM WATERS: The aircraft carrier USS Theodore Roosevelt returns to Guam in June to pick up sailors from the ship who had been in quarantine in Guam hotels or in isolation on Naval Base Guam. David Castro/The Guam Daily Post 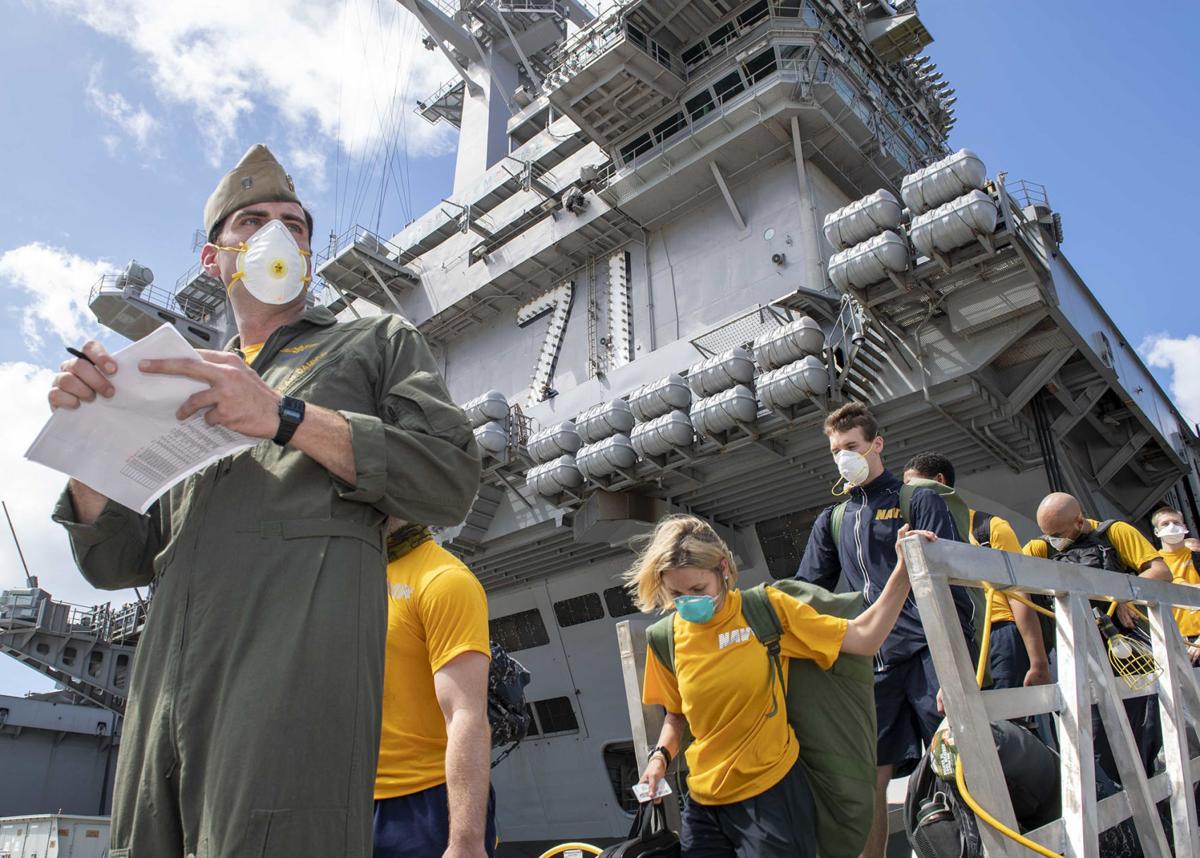 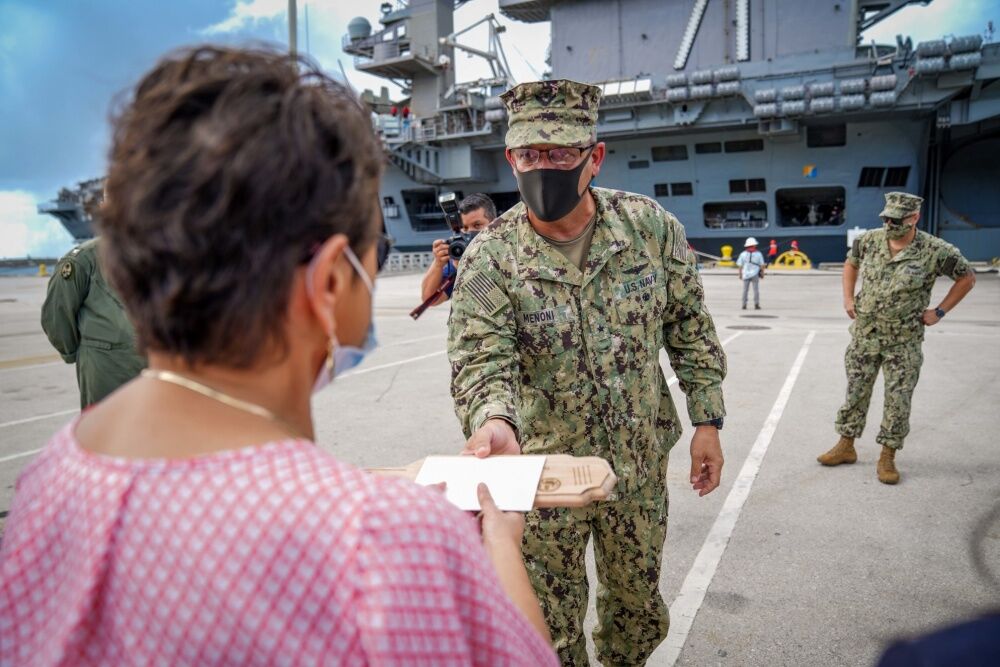 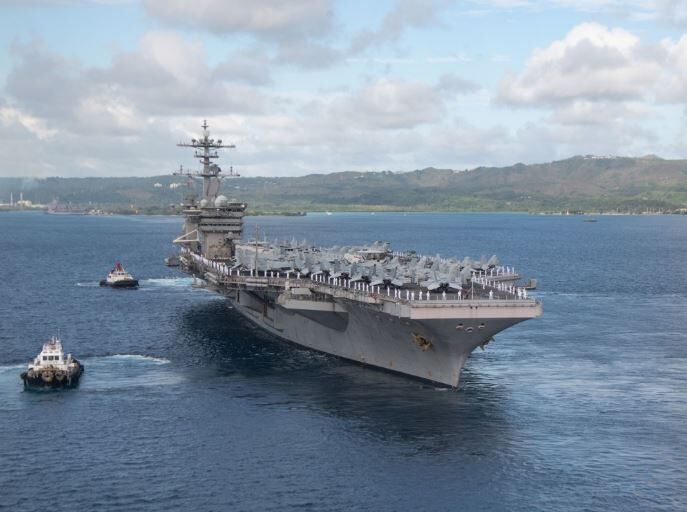 FORMATION: Sailors on the USS Theodore Roosevelt stand in formation as the ship departs the Navy base Guam on June 4 as a way of saying thank you to Guam for hosting the sailors for almost two months while they fought COVID-19. Photo courtesy of Leonard H. Adams, 7th Fleet, Navy

BACK IN GUAM WATERS: The aircraft carrier USS Theodore Roosevelt returns to Guam in June to pick up sailors from the ship who had been in quarantine in Guam hotels or in isolation on Naval Base Guam. David Castro/The Guam Daily Post

FORMATION: Sailors on the USS Theodore Roosevelt stand in formation as the ship departs the Navy base Guam on June 4 as a way of saying thank you to Guam for hosting the sailors for almost two months while they fought COVID-19. Photo courtesy of Leonard H. Adams, 7th Fleet, Navy

When the nuclear-powered aircraft carrier USS Theodore Roosevelt pulled into port at Apra Harbor on March 27, its latest visit was anything but routine.

The Theodore Roosevelt is a 4.5-acre "floating city" that the Navy describes as a key element of the nation's forward-deployed defense strategy, tasked with maintaining open sea lanes and "capable of projecting air superiority to all points of the globe."

But as the COVID-19 pandemic started to spread, the plight and vulnerabilities of the aircraft carrier and the 5,000 sailors, flight crew members and officers aboard landed in national headlines. The crisis aboard the Theodore Roosevelt and how Navy leadership handled it will leave security analysts with lots to talk about in the years ahead.

Before the aircraft carrier pulled into port on Guam, it had visited Da Nang, Vietnam in the first week of March where a few of its sailors were believed to have been exposed to COVID-19, Navy leadership has acknowledged.

The first few COVID-19 cases aboard the carrier were airlifted to Guam and within a few days of the ship arriving on Guam, the number of infected sailors climbed to dozens, subsequently spreading exponentially until more than 20% of the sailors tested positive for the viral disease.

While on Guam, the ship's commander, Capt. Brett Crozier, sent a March 30 letter, by email to his superiors, pleading for most of the sailors, save for a skeleton crew, to be allowed off the ship and into accommodations on the island.

“We are not at war. Sailors do not need to die,” Crozier wrote in a letter first published by the San Francisco Chronicle. “If we do not act now, we are failing to properly take care of our most trusted asset — our Sailors.”

The email leaked to the press and Crozier was subsequently removed from his command.

Acting Navy Secretary Thomas Modly, who fired Crozier, also had to resign a few days later after he visited Guam and made controversial comments to sailors over the ship's public address system that were recorded and leaked to the media.

"If he didn't think, in my opinion, that this information wasn't going to get out into the public, in this day and information age that we live in, then he was either A, too naive or too stupid to be a commanding officer of a ship like this," Modly said in the recorded comments. Modly also later made a public apology for the disparaging remarks, after initially refusing to do so.

The Navy asked Gov. Lou Leon Guerrero if nearly 2,000 of the aircraft carrier's sailors could stay in quarantine at a few hotels in Tumon Bay which were largely empty because international tourists had stopped arriving.

Hotel row in Tumon Bay had become a ghost town.

Leon Guerrero, on April 4, said, "The bottom line is our sailors go out and protect our freedom. ... We ask them to go out and sacrifice their lives for our protection, and they are asking us to help them get over this god-awful virus, and when I look at what the opportunities and possibilities, and the space, I decided to say yes."

The governor wasn't spared from controversy.

In November, local Republicans criticized the Democratic governor for saying she saw a "milking" opportunity when the military asked Guam to host the Theodore Roosevelt sailors in civilian hotels.

“The best decision I ever made is allowing the USS Theodore Roosevelt to go to our hotels,” Leon Guerrero said in a speech to island Rotarians. “They think we’re just the bomb. Really. The secretary of defense – I don’t know how many letters he wrote to me thanking me. The secretary of the Navy, he’s going to give us excess land because of that. So we’re milking that. We’re milking that very hard.”

The aircraft carrier finally was able to leave Guam, first in May, and  then returned June 4 to pick up more sailors who have recovered. A few hundred of its sailors remained on the island to recuperate.

Altogether, close to 1,200 of the aircraft carrier's sailors were infected.

“The crew humbly prepared to go back to sea, they had a job to do, and they did it without hesitation,” stated Capt. Carlos Sardiello, as the ship was leaving Guam on June 4.“We have returned Theodore Roosevelt to sea as a symbol of hope and inspiration, and an instrument of national power because we are TR.”