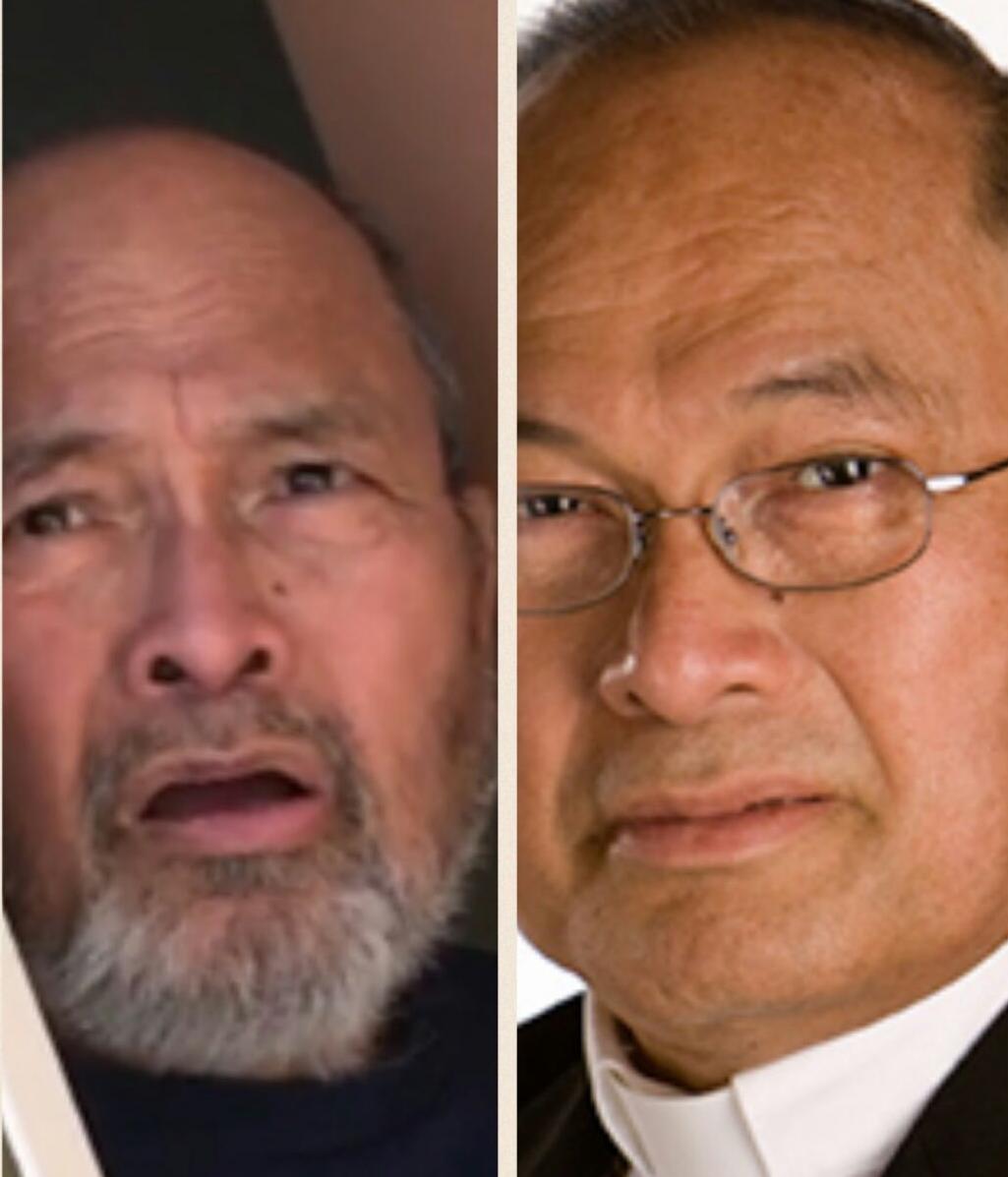 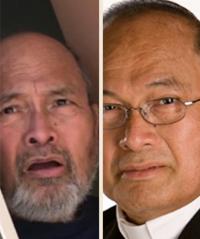 APURON: The image on the left is believed to be a photo of suspended Archbishop Anthony Apuron in Fairfield, California, taken in January 2016 by a private investigator working for some of the plaintiffs in the child sex abuse cases against Apuron. The photo on the right shows Apuron when he was still leading the Archdiocese of Agana. Post files 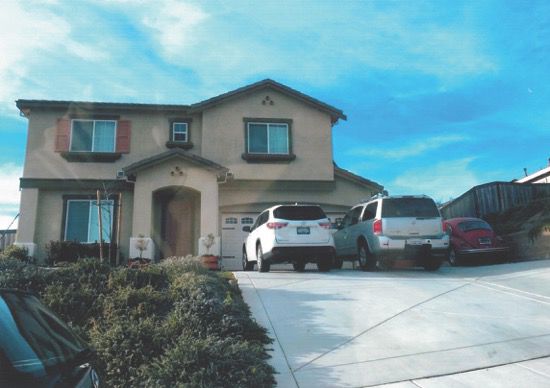 REFUGE: This house in Fairfield, California, was photographed recently by private investigators working for plaintiffs in child sex abuse cases against Archbishop Anthony Apuron. The archbishop is believed to have been living in this house, according to attorney David Lujan.

APURON: The image on the left is believed to be a photo of suspended Archbishop Anthony Apuron in Fairfield, California, taken in January 2016 by a private investigator working for some of the plaintiffs in the child sex abuse cases against Apuron. The photo on the right shows Apuron when he was still leading the Archdiocese of Agana. Post files

REFUGE: This house in Fairfield, California, was photographed recently by private investigators working for plaintiffs in child sex abuse cases against Archbishop Anthony Apuron. The archbishop is believed to have been living in this house, according to attorney David Lujan.

At least three former altar boys who claimed they were sexually abused by the former leader of the island’s Catholic Church, Archbishop Anthony Apuron, have been contacted by a stateside priest to provide information about their stories. Attorney David Lujan confirmed that three of his clients were contacted to be interviewed in a deposition for Apuron's canonical trial.

In addition to the canonical trial, which is held behind closed doors in the Vatican, the number of recently filed civil lawsuits against the Archdiocese of Agana in the federal court in Guam rose to 11, after five additional cases were filed yesterday.

The 11 cases now filed in the District Court of Guam seek more than $55 million in damages combined. The lawsuits also seek to hold the Vatican responsible for the allegations against the archdiocese.

Not much is known of the canonical trial for Apuron, and it's unclear why Apuron was found living in Fairfield, California if the trial is ongoing in Rome. Private investigators working for Lujan tracked Apuron to a two-story house in Fairfield.

In a statement to the press in August of last year, Apuron said the Pope had granted his request for a canonical trial. The 71-year-old was placed on leave by Pope Francis in June of last year.

Coadjutor Archbishop Michael Byrnes stated last November that the initial phase of the canonical trial had started. Attorney Patrick Wall, a former priest and an advocate at Jeff Anderson & Associates, said he believes the initial phase means that a complaint was filed by the Promoter of Justice at the Congregation of the Doctrine of Faith.

Attorney Lujan has written to the priest who contacted three of his clients, expressing concerns with the “veil of secrecy” over the entire canonical trial process, but most especially the depositions. “I’ve written to the priest asking him what authority do you have?” Lujan said. “It may be secretive as to all of us, but I’m not sure it’s secretive to whoever’s taking it and Apuron’s lawyers. I mean, hell, we want in on this action. It’s only fair.”

Church law does require that formal trials and other processes that lead to the imposition of penalties be dealt with confidentially to protect the accused, the witnesses, and the integrity of the process, according to the U.S. Conference of Catholic Bishops.

What’s more disconcerting to Lujan is that he understands there is a judge going around whose job it is to take depositions. “What’s he a judge of? Obviously, we’ve never heard of a judge taking depositions in American juris prudence. He’s not an American judge,” Lujan stated.

Because the entire canonical trial process hasn’t been clearly explained or divulged, the attorney said he isn’t inclined to subject his clients to being deposed while there are so many unanswered questions. “If it’s secretive, what rules are these secretive depositions supposed to be done? What law authorizes the confidentiality about this? Who do they represent? The prosecutor? Or Apuron? Are they part of Apuron’s defense? Our position is until they answer those questions, nothing’s going to happen,” Lujan explained.

Wall in his research said he is unaware of any bishop, who sexually abused children, finishing a canonical trial. He said Archbishop Jozef Weslowski, Apostolic Nunio to Haiti, died prior to the completion of his 2015 trial in Rome.

“There is no such thing as a speedy process when it comes to the Vatican,” said Joelle Casteix, western regional director of Survivors Network of those Abused by Priests, or SNAP.

The organization has been encouraging victims of sexual abuse by the clergy on Guam to come forward since 2010, and has called for Apuron’s resignation.

“We were disturbed to learn that Archbishop Apuron is living in hiding and unsupervised in California. The Vatican has promised transparency when it comes to child sexual abuse. In fact, Pope Frances told the world that child safety is the church’s highest priority. Yet the Vatican and Coadjutor Archbishop of Guam Michael Byrnes most likely knew that a credibly accused child molester was secretly living in a California neighborhood and refused to warn the community,” Casteix told the Post.

“If this reckless, dangerous and shameful behavior on the part of Vatican and Guam church officials is any indication of how Apuron and others were protected, we fear that we will hear from dozens more men and women who were sexually abused by Guam’s predator clerics,” she added.

When asked about Apuron’s whereabouts, his attorney, Jacqueline Taitano-Terlaje said, “The archbishop is in a location where he is able to continue working on defending his innocence without distraction.”

Lujan’s office on Wednesday moved five more cases from local courts to the District Court of Guam. According to court documents, the five newly filed suits include the four original plaintiffs who publically named Apuron as their accuser beginning in May 2016.

Like the six cases moved last week, the five cases filed yesterday each demand relief in the form of a minimum $5 million in damages.