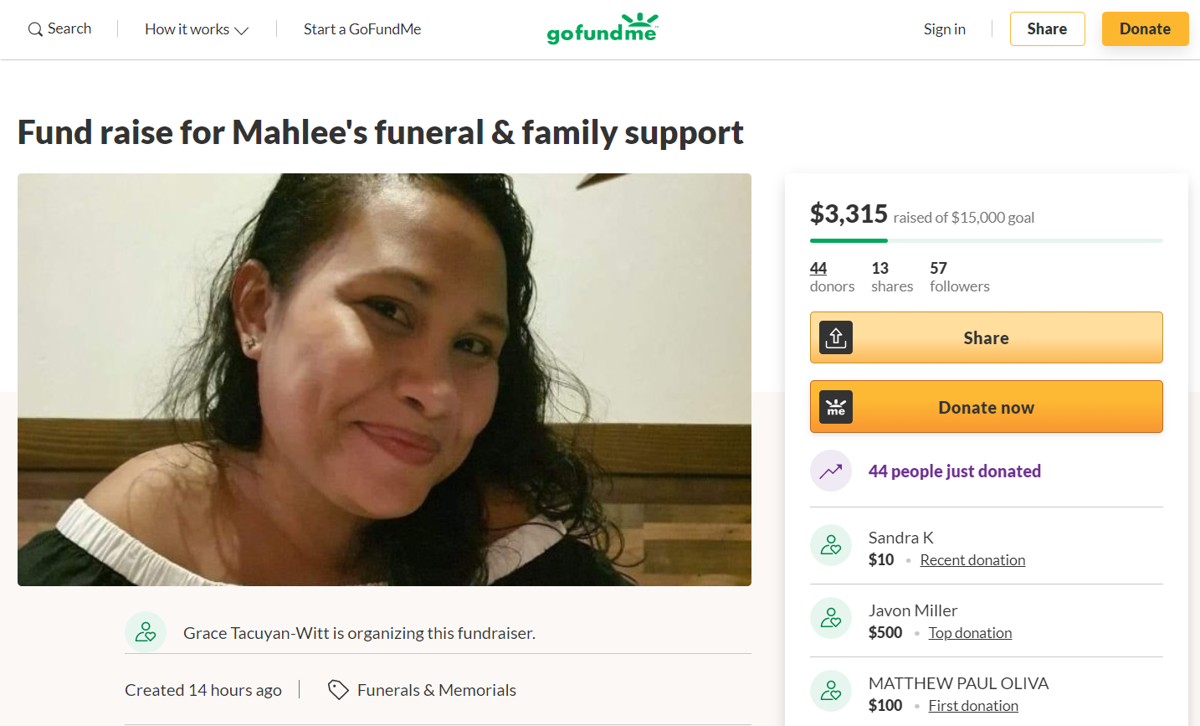 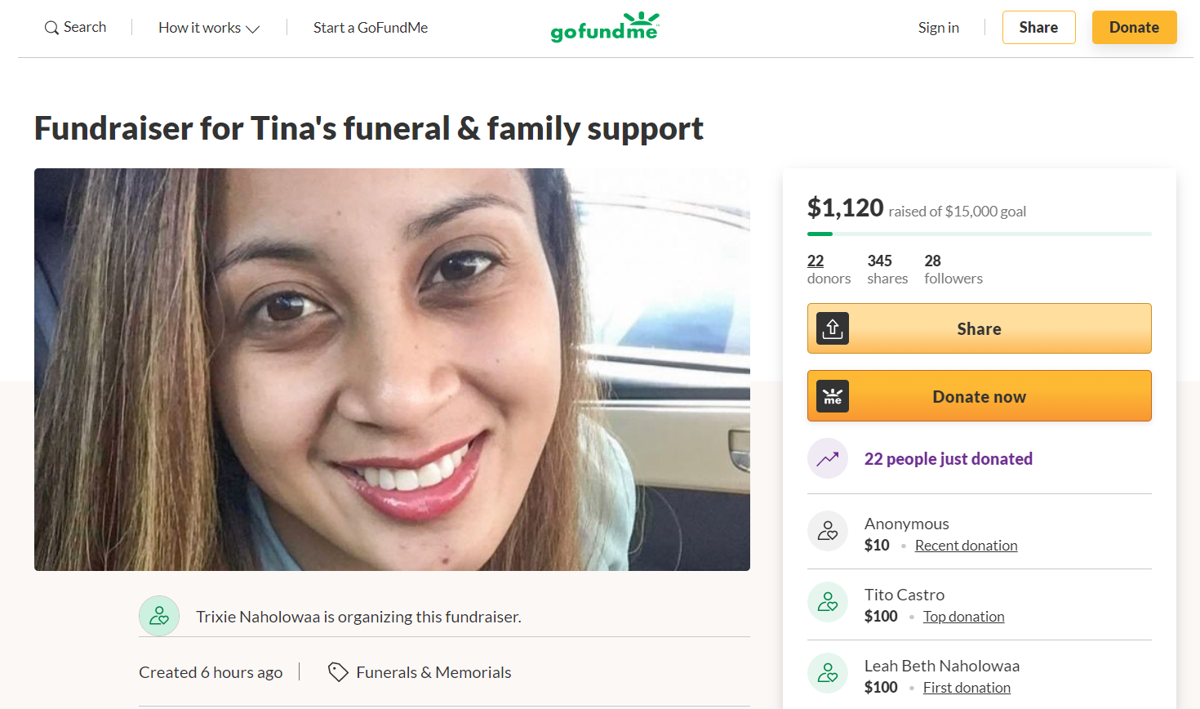 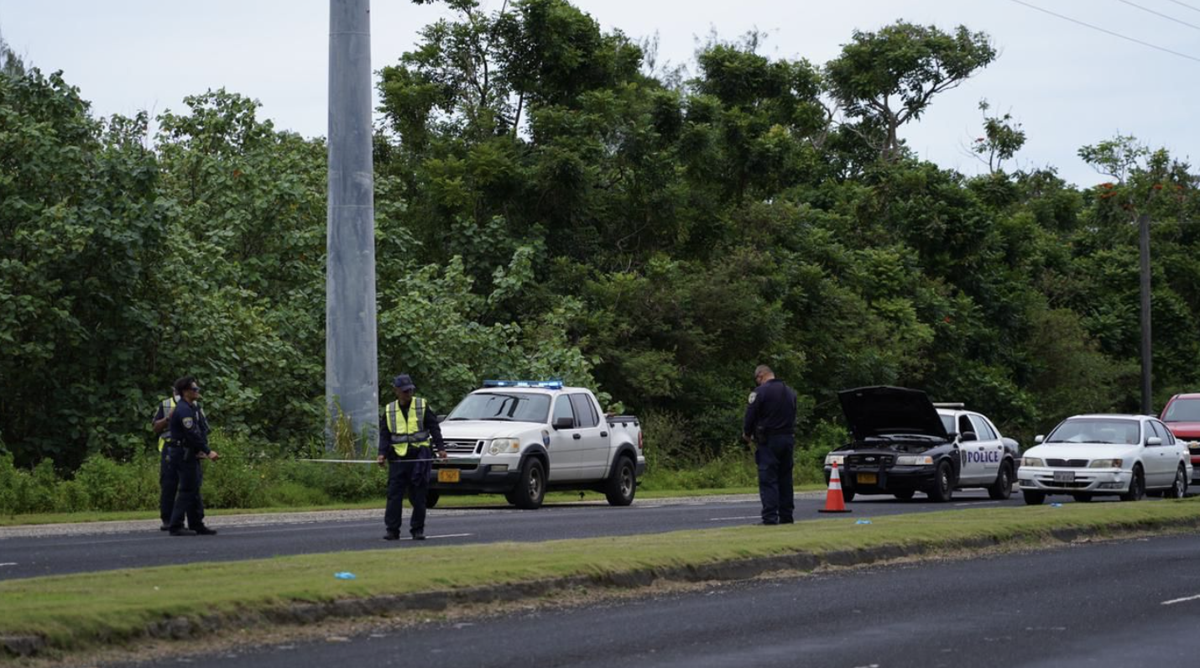 INVESTIGATION: Guam police continue their investigation Monday into the crash of an SUV that killed two women who were cousins and moms to young children. Kevin Milan/The Guam Daily Post

Christopher Hagge was at a family birthday gathering on Saturday when he heard about the serious car crash in Piti that ultimately claimed the lives of his wife Mahlee McKay and her cousin Tina Tamangided.

Both women were 29. They were both moms to young children.

He knew that his wife was with her two cousins on the road at that time in an SUV.

They began to worry when none of the three picked up their phones.

“We noticed that after an hour went by, the auntie called her daughter, the driver. The husband of the other one tried calling her. I tried calling my wife. No one would answer,” said Hagge.

“It was impossible that no one would answer. My wife would always answer my phone call. We just kept trying. Then the auntie got a call about an accident. They didn’t know what kind of car. They only knew it was a black SUV.”

Hagge eventually got on his motorcycle and rushed down to the crash site in Piti near Polaris Point.

Crash investigators learned that the three women inside a black Hyundai Tucson were headed south on Marine Corps Drive when the car ran off the road and hit a concrete pole.

“I couldn’t tell what kind of car it was because it was too damaged,” he said. “I was hoping it wasn’t them.”

McKay was a mother of five children. Her oldest is 10 and the youngest is only 1 year old.

“She was a strong woman. She was a soulful woman – humble. She was a great wife, a great mother, a greater sister, someone you can get along with. She doesn’t take anything for granted and helps everyone in need. She put everybody else before herself. She puts her kids and myself before herself. She juggles taking care of my five kids on top of taking care of me at the same time,” he said.

The couple had been together for nearly 12 years.

Investigators with the Guam Police Department’s Highway Patrol Division are investigating how the crash occurred. There's been no word on the condition of the third woman who was taken to the hospital following the crash.

The tragedy led to friends of the family creating an online fundraising page to receive help for funeral expenses.

“As one of Christopher's closest friends, I and many others are devastated by Mahlee's passing,” said Grace Tacuyan-Witt, who created the GoFundMe account. “In addition to covering the costs of the funeral and memorial costs, any additional funds raised will go to future needs the children may need. I and many of the family's friends and loved ones would like to stand with the family during this unthinkable loss.”

Tamangided leaves behind a five-year-old daughter, according to her friend Trixie Naholowaa.

“We are all devastated by Tina’s loss and were not prepared for the high cost of a funeral service,” said Naholowaa. “We want to give Tina the memorial she deserves, to honor her memory and say our last goodbyes. In addition to covering the costs of the funeral and memorial costs, any additional funds will go to future needs of her daughter.”

Their deaths marked the 13th and 14th traffic-related fatalities recorded this year. Five lives have been lost just this month.

1) The auto-pedestrian crash reported on Feb. 6 on Route 10 in Mangilao claimed the life of Francis Kintin, 23.

2) The car that crashed into a concrete wall on March 10 at West Santa Monica Avenue in Dededo claimed the life of a man.

3) A motorcycle crash reported on March 16 on Santos Hill in Tumon claimed the life of a man.

4) The car that crashed into a concrete pole on March 23 on Route 8 in Barrigada claimed the life of a man.

5) The car that plunged over Talofofo Bay Overlook on March 28 on Route 4 claimed the life of 57-year-old man.

10) The car crash on Sept. 2 on Route 4 in Chalan Pago claimed the lives of first cousins Austin Malur, 25, and Jalvin Retoglig, 21.

12) The SUV that crashed into a concrete pole on Sept. 11 on Route 1 in Piti claimed the lives of Mahlee McKay 29, and Tina Tamangided, 29.