It was misleading to "broadly assert" that $32 million is available specifically for villages, Department of Administration Director Edward Birn said in response to statements said during a virtual meeting hosted by Sen. James Moylan on Tuesday. 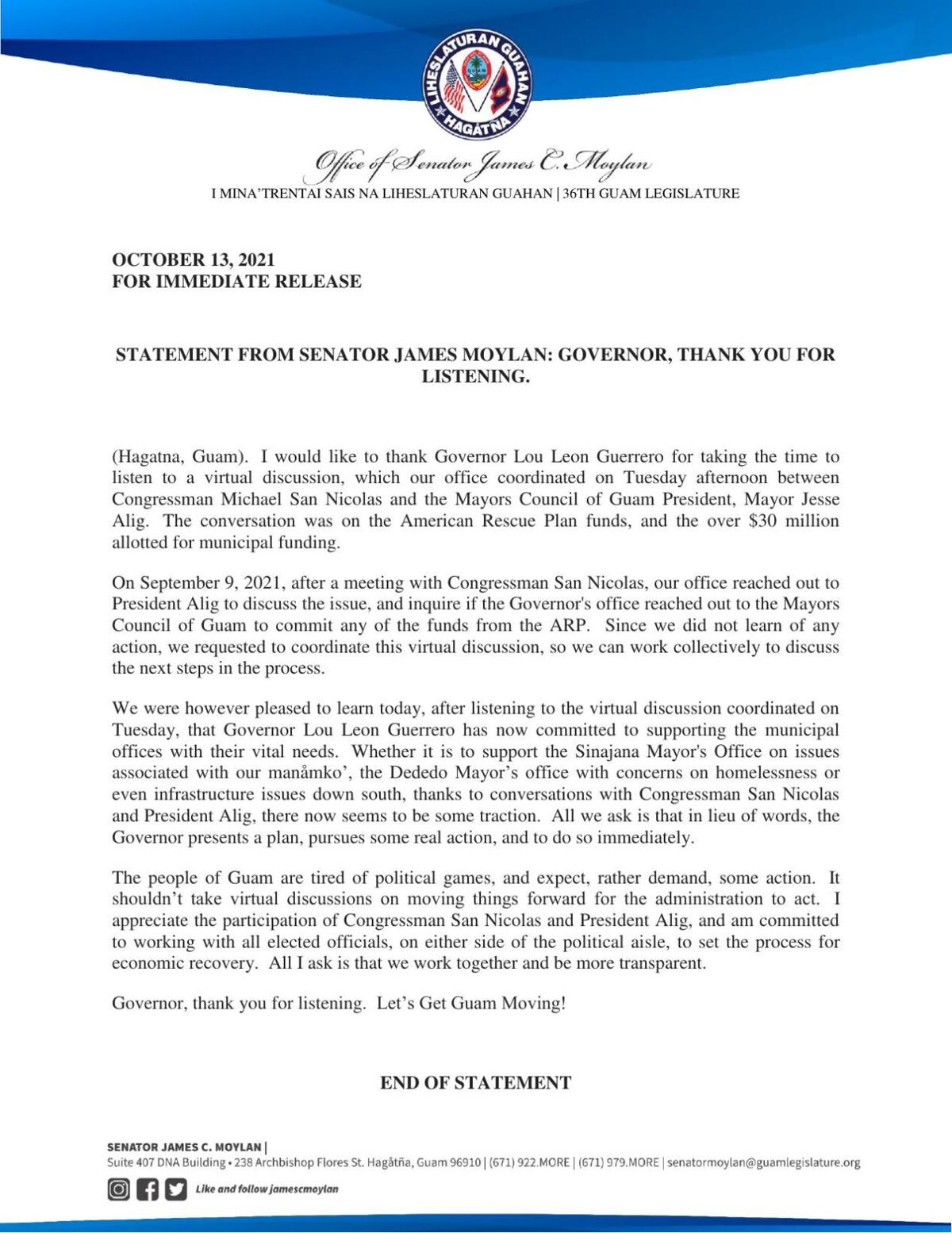 "These funds, as with all federal grants, come with restrictions and we ... all should understand that, especially our elected officials. Failing to abide by those restrictions will only result in Guam having to repay the funds," Birn said.

Moylan met with Guam Del. Michael San Nicolas and Jesse Alig, mayor of Piti and president of the Mayors' Council of Guam, to discuss the availability of funding under the American Rescue Plan.

Guam was allocated about $553 million in Coronavirus State and Local Fiscal Recovery Funds under the ARP. According to San Nicolas, that includes $32 million in municipal funding, which is shown under the list of allocations for counties.

Territorial municipalities such as Saipan, Tinian and Rota were given their own funding under this allocation. But Guam's funding is a lump sum to the island and not split among its municipal villages.

"Our villages were not designated by (the U.S. Department of the) Treasury as 'counties' or separate incorporated municipalities so they don’t qualify to receive the funds directly. We are working with Treasury and MCOG on how to maximize the amount and use of ARP funds based on the limitations on how these funds can be used," Birn said.

But while the director's comments were directed at Moylan, it was San Nicolas who said that if funding is to be provided under the intent of the ARP, the $32 million should be going directly to villages, and it was important to know how Guam requested the municipal funding.

Pleased to know they were listening

Moylan, however, drew some positive outlook from Birn's response.

"I greatly appreciate that the administration was actually listening in to the virtual discussion yesterday and has now decided to support the municipal governments with some federal funding. The villages need the support, which is why we coordinated the conversations with Congressman Michael San Nicolas and MCOG President Mayor Jesse Alig," Moylan told The Guam Daily Post when asked to comment on Birn's statements.

"What is unfortunate, however, is the political games the administration continues to play. For months, my colleagues and I have asked for a spending plan of the federal relief funds, of which we have received nothing. Literally zero, tåya', nothing. The lack of transparency is a disservice to the community."

"Yet here we are, less than 24 hours from our virtual discussions and suddenly the administration decides to finally provide the municipal government the federal funding support they rightfully deserve," the senator added before asking the governor to work with lawmakers and "stop these political games."

Moylan also thanked the governor in a separate press release, stating that he was pleased to learn the governor had "committed to supporting the municipal offices," before asking the governor the present a plan and pursue action immediately.

"The people of Guam are tired of political games, and expect, rather demand, some action.  It shouldn’t take virtual discussions on moving things forward for the administration to act," the press release stated.