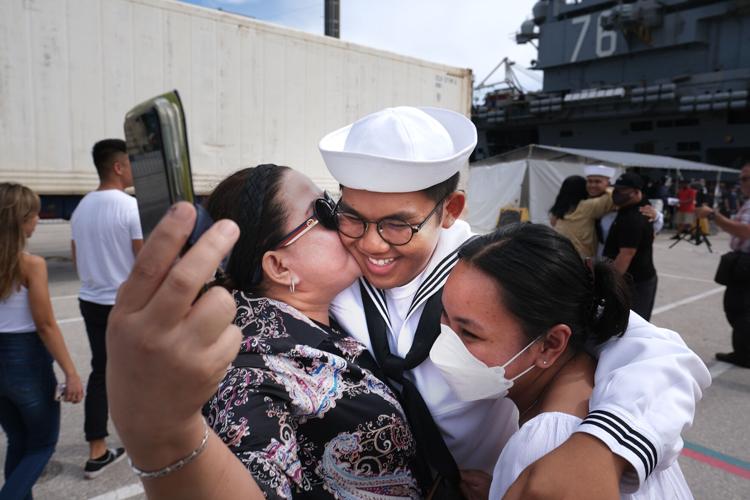 WELCOME: Ethan John Doroteo, center, gets a kiss from his mother, Elsie Doroteo, and a hug from his girlfriend, Dayana Umed, after disembarking from the USS Ronald Reagan at Naval Base Guam on Thursday morning. Norman M. Taruc/The Guam Daily Post 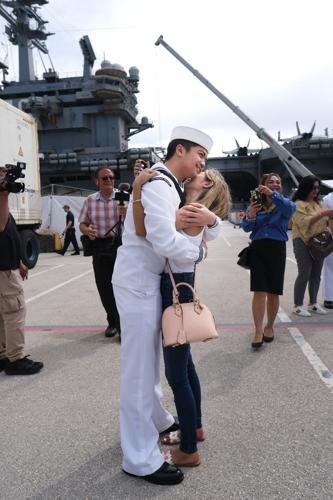 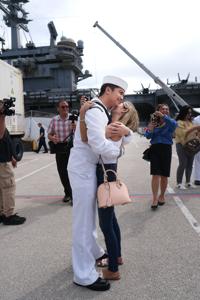 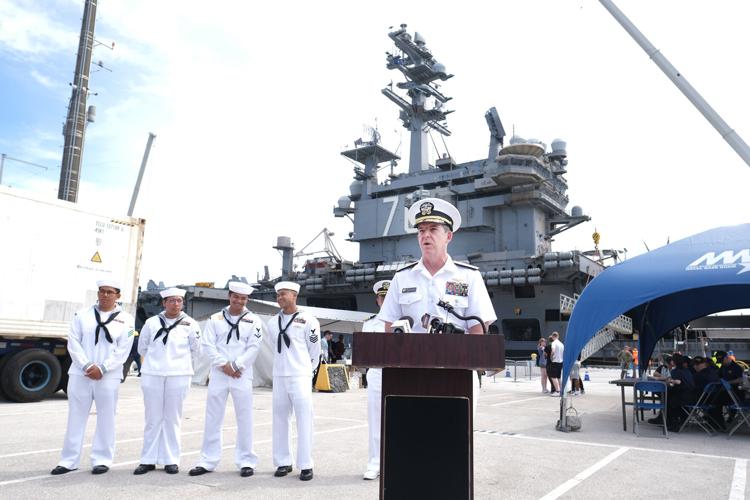 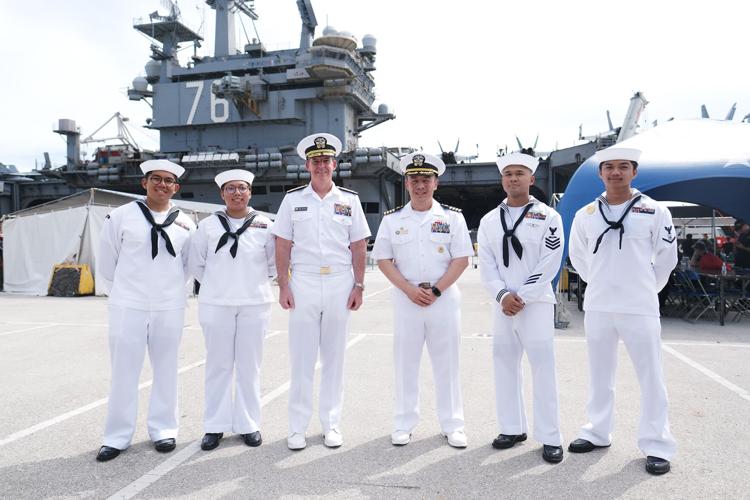 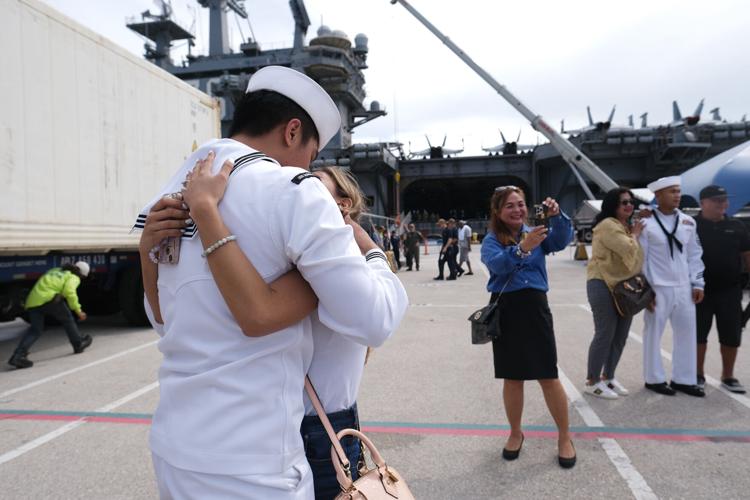 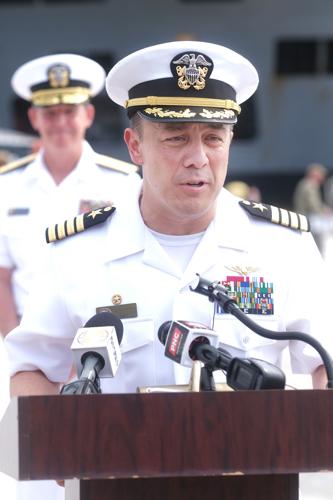 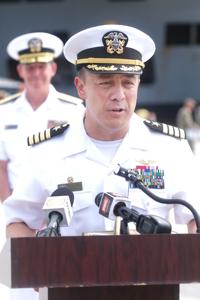 WELCOME: Ethan John Doroteo, center, gets a kiss from his mother, Elsie Doroteo, and a hug from his girlfriend, Dayana Umed, after disembarking from the USS Ronald Reagan at Naval Base Guam on Thursday morning. Norman M. Taruc/The Guam Daily Post

You may have noticed an increased amount of activity in the streets of Tumon and in other parts of the island as the aircraft carrier USS Ronald Reagan pulled into port Thursday to give the sailors a little break.

“It's a great opportunity to be here on Guam this morning. I think what we just witnessed with these four sailors getting an opportunity to see friends and family here on the island is the tip of emotion for the entire group. Looking forward to the hospitality and chance to enjoy the great culture and a chance to relax here on Guam,” Rear Adm. Michael “Buzz” Donnelly, commander of Task Force 70 and Carrier Strike Group 5, said during a media event.

The time on Guam is well deserved as the 5,500 sailors aboard the Ronald Reagan and Carrier Strike Group 5 just wrapped up Operation Valiant Shield and other exercises in the Pacific region.

“We have some important exercises and operations since we left Japan at the end of May conducting training, as well as exercises, with our partners and allies in the region including our partners in Japan and Korea. Then, most recently having to wrap up a large exercise with our joint services here in the Mariana Islands Training Complex, conducting Exercise Valiant Shield,” Donnelly said.

The Mariana Islands Training Complex includes more than 500,000 square miles of ocean, land and air space in Guam and the Commonwealth of the Northern Mariana Islands. It allows the Department of Defense to host training exercises such as Valiant Shield that brought together different branches of the military, including Navy, Air Force, Marines, Army and Space Force.

“Valiant Shield gives us a U.S.-only joint focus to exercise our high-end tactics for war fighting across a domain of activities subsurface, surface and air. The events that we got to execute in Valiant Shield gave us a very high degree of confidence in the credible combat capability that our strike group and USS Ronald Regan and Deployed Airwing 5, are able to bring and present to the Department of Defense as valuable tools in protecting and supporting U.S. interests in the region and allies and partners throughout Indo-Pacific,” Donnelly said. “I think the performance was excellent.”

With the exercise completed, the carrier's sailors eagerly disembarked from the vessel on Thursday for a few days of liberty.

“We’ve been deployed since May 20 and, while we are always appreciative and excited to work in foreign locations such as Japan, it is great to be back with Americans just the same. While we are here, we look forward to a series of tours as well as other recreational activities. We are also looking at giving back to the community. We have a handful of community projects while we are here for the next few days,” said Capt. Fred Goldhammer, commanding officer of the Reagan.

But, none were as excited as the four sailors who call Guam home. For the first time since the pandemic, families were allowed to welcome their sailors at the dock. Some family members held up signs and all wore big smiles.

Aviation Boatswain's Mate Richsan Magpantay is from Yigo. He was last on Guam in 2014.

“It's overwhelming, that was the main reason I went back to Japan was to visit over here, but it took like three years, we finally made it. Two years ago we were over here but we were only pierside, so it was only like a steppingstone. Now I am actually here, I am going to see my old friends that I haven’t seen since 2007. It's been a long time since I’ve seen them,” Magpantay said.

The day was just as overwhelming for his parents.

“I am very excited to see him, for how many years I have been waiting to see him. Tonight we are having a get-together party, all his friends from high school and elementary are coming to our house to celebrate him here. We are very, very happy and proud to be seeing him again. Serving our country, it’s big for us to have a soldier like my son,” Susan Magpantay said.

Another Guam sailor who was greeted by his family was Aviation Boatswain's Mate John “Ethan” Doroteo, also from Yigo.

“I’ve been on the ship for three years,” Ethan Doroteo said as he described sailing on the open seas as “hot.” He is happy to be home and surrounded by family.

Doroteo’s father, mother and girlfriend were present to welcome him home with a bright yellow sign and affectionate embraces.

Doroteo’s father told The Guam Daily Post it's a moment he’s been waiting for since they last saw each other in December.

“We are very excited. Excited because I was waiting for a call yesterday. We are very proud of him,” Jackson Doroteo said.

While roughly 150 of the sailors will be engaged in community outreach and volunteer activities, Guam sailors such as Doroteo will be getting their fill of family.