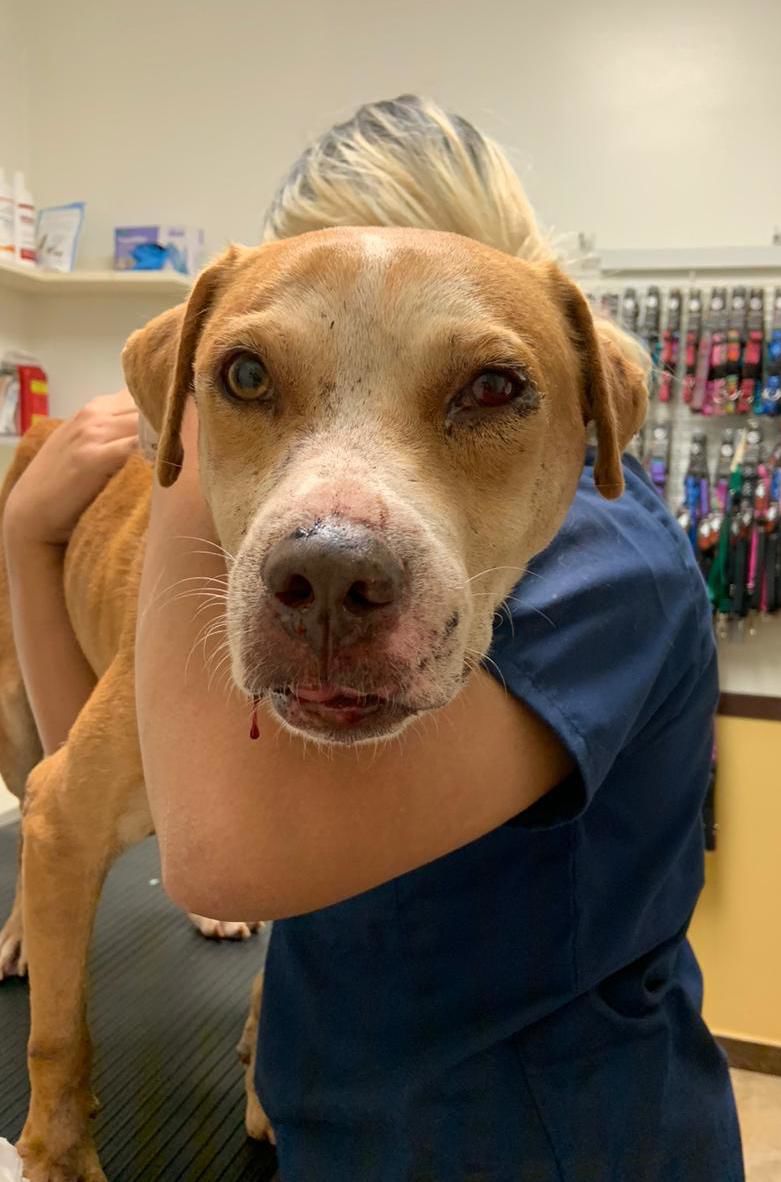 HELP: Guahan Paws for Pets is reaching out to the community to provide donations to Zeus whose owner found him badly beaten. He was brought to Animal Medical Clinic where he will remain for several days to be nursed to health. Photo courtesy Guahan Paws for Pets 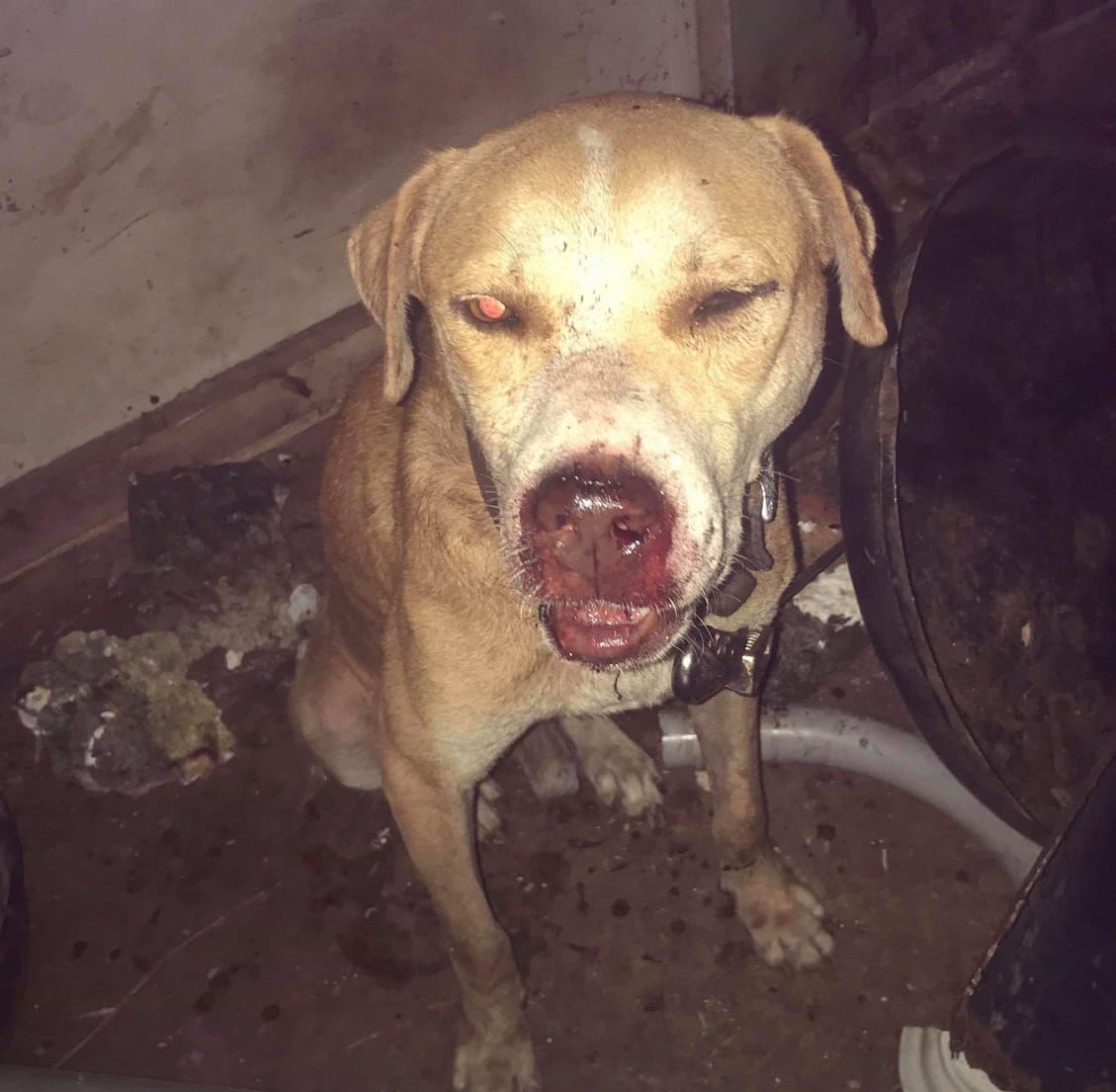 HURT: Zeus was found beaten at his home on Swamp Road in Dededo on Tuesday night. Owner Rossane Ikertang is asking for the public's help in finding the person responsible for beating her dog with large rocks and a cinder block.  Photo courtesy of Rossane Ikertang

HELP: Guahan Paws for Pets is reaching out to the community to provide donations to Zeus whose owner found him badly beaten. He was brought to Animal Medical Clinic where he will remain for several days to be nursed to health. Photo courtesy Guahan Paws for Pets

HURT: Zeus was found beaten at his home on Swamp Road in Dededo on Tuesday night. Owner Rossane Ikertang is asking for the public's help in finding the person responsible for beating her dog with large rocks and a cinder block.  Photo courtesy of Rossane Ikertang

Guam Animals In Need is joining local animal right's groups who are working with the Ikertang family to search for answers after they found their pet dog badly beaten, surrounded by bloodied rocks and drenched in gasoline.

GAIN is offering a $1,000 reward for information leading to the arrest or indictment of the person responsible for the attack.

"On Tuesday, Jan. 14, sometime before 9:30 p.m., a person or persons trespassed onto the private property of Rossane Ikertang on Swamp Road in Dededo," the press release states. "They drenched her dog, Zeus, with gasoline, and beat him so severely that blood was found splattered on the outside walls of the home. Bloody rocks, including a large piece of cinder block, were found at the scene. When Zeus was found, the five-year-old half pit-bull and half boonie mix was terrified and in severe pain."

Ikertang told The Guam Daily Post that she had called the police to report the incident and waited for hours but no officers came and she never received a call back.

GAIN officials said Ikertang "found they were dismissive of her concerns."

"They didn't ask for details, the condition of Zeus, or anything," she's quoted as saying in the press release. "She was told that due to other priorities, an officer would respond if available. She was given no further instructions or case number. Ikertang stayed up until 2:30 a.m, but no officer arrived or called."

GAIN officials said as of Thursday morning, GPD hadn't visited or contacted her.

“I just want to file a police report, to help stop this monster,” Ikertang stated.

After discovering Zeus, Ikertang reached out to GAIN and local Facebook animal welfare groups, including Guahan Paws for Pets who posted about the attack on social media. On Wednesday morning, with the help of local animal welfare advocate Tinamarie Guzman, she took Zeus to Animal Medical Clinic.

Zeus reeked of gasoline, the release stated. He was quickly washed.

"The subsequent medical evaluation found severe injuries. Numerous teeth were damaged, shifted, or knocked out, and Zeus’ left eye was swollen nearly shut. Zeus is currently staying overnight at the veterinary clinic, and recovery is touch and go," the release stated. "Upcoming x-rays should reveal the extent of the damage, and if Zeus is able to recover, surgery will likely be needed."

Zeus’ medical care may be very costly. Donations to help Zeus and his family can be made at Animal Medical Clinic.

“I’m scared for my daughter, myself, and of course Zeus. Somebody tried to set my pet on fire and beat him to death. How can we feel safe?” said Ikertang. “My daughter cried herself to sleep. She’s traumatized after seeing her best friend hurt like this,” she added.

“We have no idea why GPD didn’t respond,” said GAIN Board President, Cyrus Luhr. “Research shows that people who attack animals also attack humans. And we have a monster on the loose who tried to set a pet dog on fire. Do we have to wait until there’s a murder?” he added.

“We need to find the attacker before others are hurt,” said Luhr. “We’re asking GPD to explain what happened, and to explain how they plan to protect Ms. Ikerlang, her daughter, and Zeus,” he added.