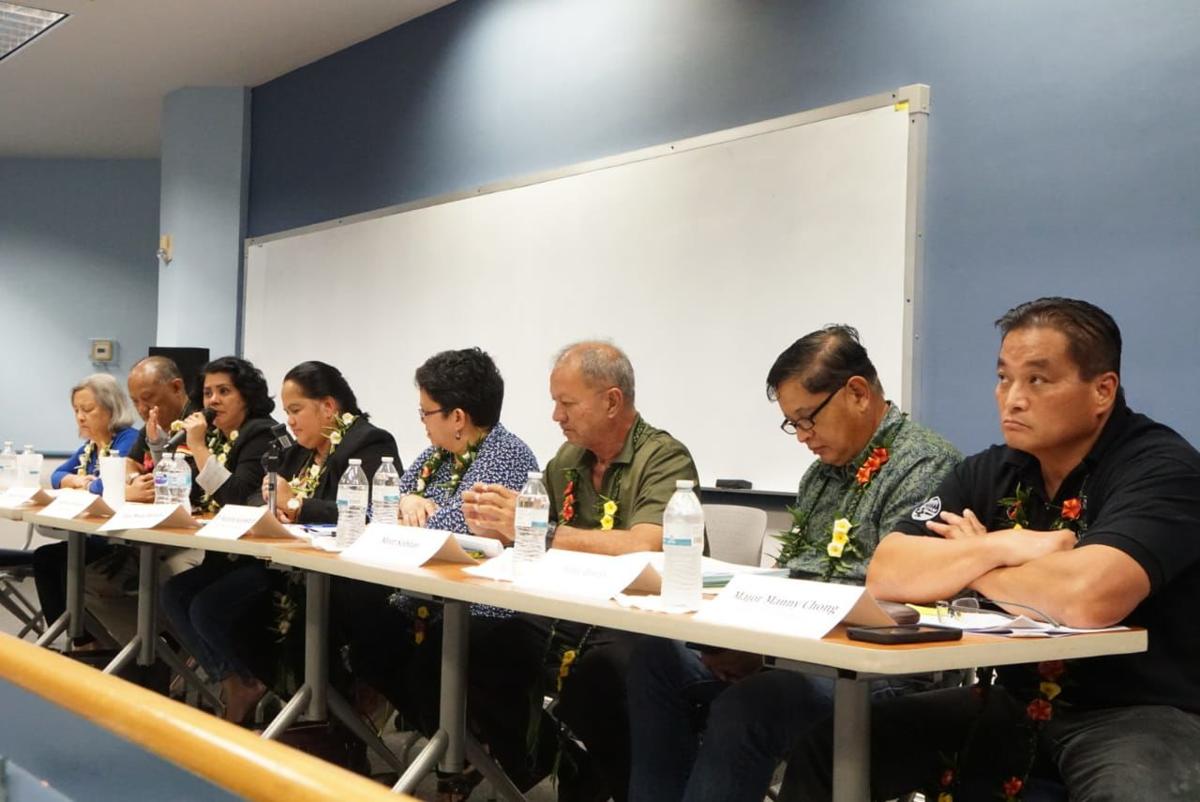 FORUM: Representatives of the public and private sectors participate in a forum on medical marijuana Wednesday at the University of Guam campus in Mangilao. David Castro/The Guam Daily Post 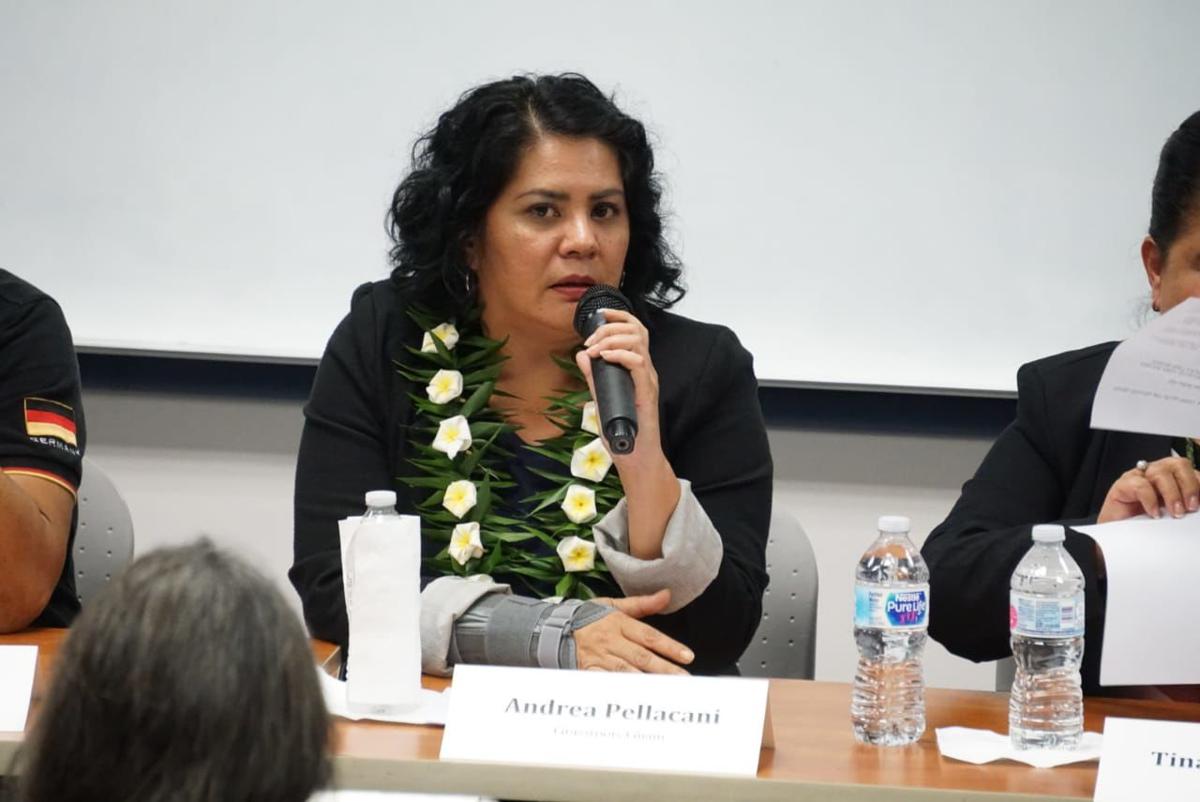 PELLACANI: In this file photo, Andrea Pellacani from Grassroots Guam answers questions about medical marijuana during a forum at the University of Guam. Pellacani and Sen. Clynt Ridgell are urging the community to participate in the discussion on adult-use marijuana. There is a public hearing on Bill 32-35 today at 9 a.m. and again at 2 p.m. Post file photo 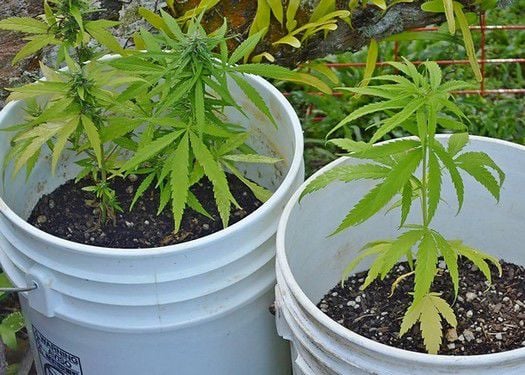 FORUM: Representatives of the public and private sectors participate in a forum on medical marijuana Wednesday at the University of Guam campus in Mangilao. David Castro/The Guam Daily Post

PELLACANI: In this file photo, Andrea Pellacani from Grassroots Guam answers questions about medical marijuana during a forum at the University of Guam. Pellacani and Sen. Clynt Ridgell are urging the community to participate in the discussion on adult-use marijuana. There is a public hearing on Bill 32-35 today at 9 a.m. and again at 2 p.m. Post file photo

Four years after the legalization of medical marijuana on island, statutory gaps still hinder access for qualified patients who can legally use the product for treatment of certain debilitating conditions. These gaps include inadequate protection for caregivers and a lack of legal guidance on the implementation of the law.

During a medical marijuana forum Wednesday at the University of Guam, representatives from law enforcement as well as the public and private sectors answered questions related to the medicinal marijuana program on Guam.

A home cultivation law signed in October now allows qualified patients to grow their own medicinal marijuana under certain conditions. Public Law 34-125 allows patients or their caregivers to obtain a permit from the Department of Public Health and Social Services to grow cannabis.

Dr. Suzanne Kaneshiro from DPHSS explained that under the law, individuals can grow up to 12 juvenile plants and six flowering plants inside the home, under lock and key. Outside cultivation will not be permitted. DPHSS also is required to inspect the plants and seize any plants that exceed the number permitted.

The law failed to address the legal protections for caregivers who are designated as cultivators, according to Andrea Pellacani, Grassroots Guam managing partner. She said the statutory protection for arrest and prosecution was not contained or written into the bill.

“Technically, they can still be charged with possession, manufacturing and trafficking of a controlled substance. That, to me, is a pretty big oversight in this bill,” Pellacani said.

It should be clear that a designated caregiver is protected from arrest, according to Pellacani.

During the forum, the panelists referred to legislation introduced by Sen. Dennis Rodriguez Jr., Bill 380-34, which seeks to protect those engaged in the home cultivation of medical cannabis – a potential legislative remedy to the issue.

The forum panelists also were presented with two scenarios related to patient access. Under the current statutes, schools are designated as drug-free zones. The scenario focused on this restriction and how it could hinder access to treatment for children who are part of the medical cannabis program.

“One of the biggest things that we wanted to address was the children that are under medical cannabis care that have medical cannabis therapy. A lot of them are children with seizure disorders. Under the current guidelines, they would not be able to get their therapy in school,” Pellacani said.

Pellacani said that once the program is up, there would be advancements in transdermal patches and other methods. However, Guam's home cultivation won't be able to come up with these types of deliveries.

Pellacani said the group also is pushing for workforce policies. She added that it is not just about schools, but also about employees who are patients.

In terms of addressing some of the gaps in the law, former senator and now Sen.-elect Tina Muña-Barnes, who authored the original medicinal cannabis statute, said, “When a law is passed, it has an evolution, and things can be changed at anytime.”

Muña-Barnes said policymakers will be there to make the necessary provisions by working closely with all stakeholders and gathering community input.

On the part of the Guam Police Department, Maj. Manny Chong said, “We don't arrest sick people, especially when the intention is to medicate rather than get high.”

"I brought it up at the beginning of the semester about where would a university designate a location for me to consume my medication on campus – within reason, away from people," Savares said. "I was shunned by the university, and I was very upset."

“It really hurts – as a patient of this program – to see the University of Guam not being progressive,” he said.

Pellacani said Guam’s medical cannabis commission should take the lead in identifying these policy gaps and then pass on the policy recommendations to the Legislature.

"But when you go through four years without any meeting from the medical cannabis commission, we are going to get nothing – which is where we are today," Pellacani said.